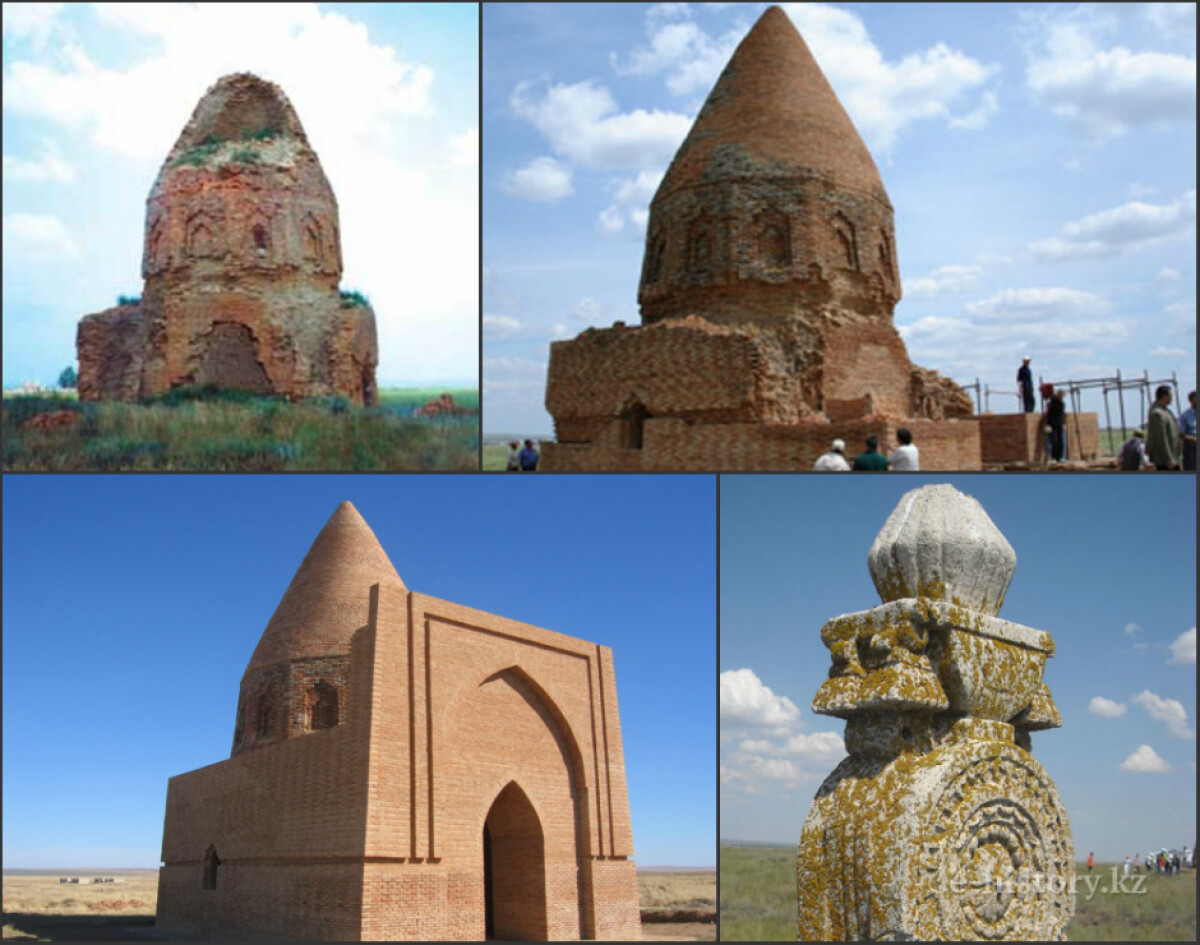 The mausoleum is visible afar, from a distance of several kilometers, as if it undersets the sky. It is like a light-house in desolate steppes for a lost traveler.

A remarkable monument in the area of the river Uly-Khobda and Ilek is the necropolis Abat-Baitak, which is located in Khobda district, Aktyubinsk region, 12 kilometers to the south from the town Taldysai. There is a huge necropolis on the area of up to 600 meters, the formation of which dates back to the Middle Ages. 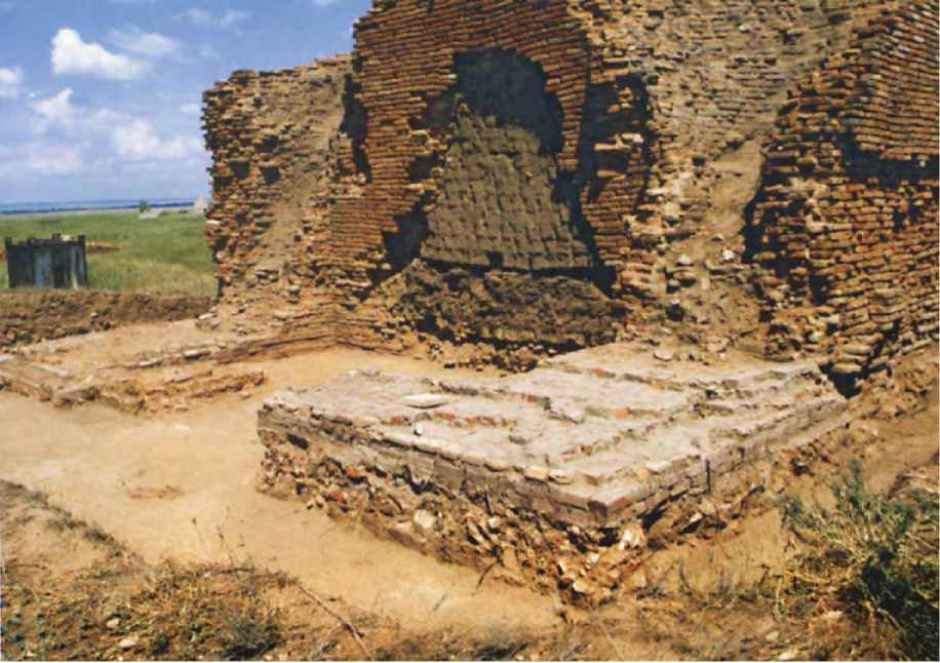 It is the Abat-Baitak mausoleum, an outstanding monument of architecture, one of the few remaining mausoleums of baked bricks with conical dome in the region. Researchers on History and Architecture of Kazakhstan considered this mausoleum lost (unpreserved) for a long time. This remarkable monument was reopened by the expedition in 1979. Architectural measurement, photofixation as well as excavations in the portal section of the construction were made during two seasons. Research has shown that architectural type of the monument was close to the bridge-dome type mausoleums with a hipped roof (Kok-Kesene and Kesene) and not centric, as it was noted in the literature. Excavations have revealed the remains of tower layers of the portal, extended beyond the line of the walls for 2,98 meters. The preserved height of the magnificent monument is 14,5 meters. The mausoleum is dated from late XIV-early XV centuries by architectural and stylistic features, partly according to the legend. 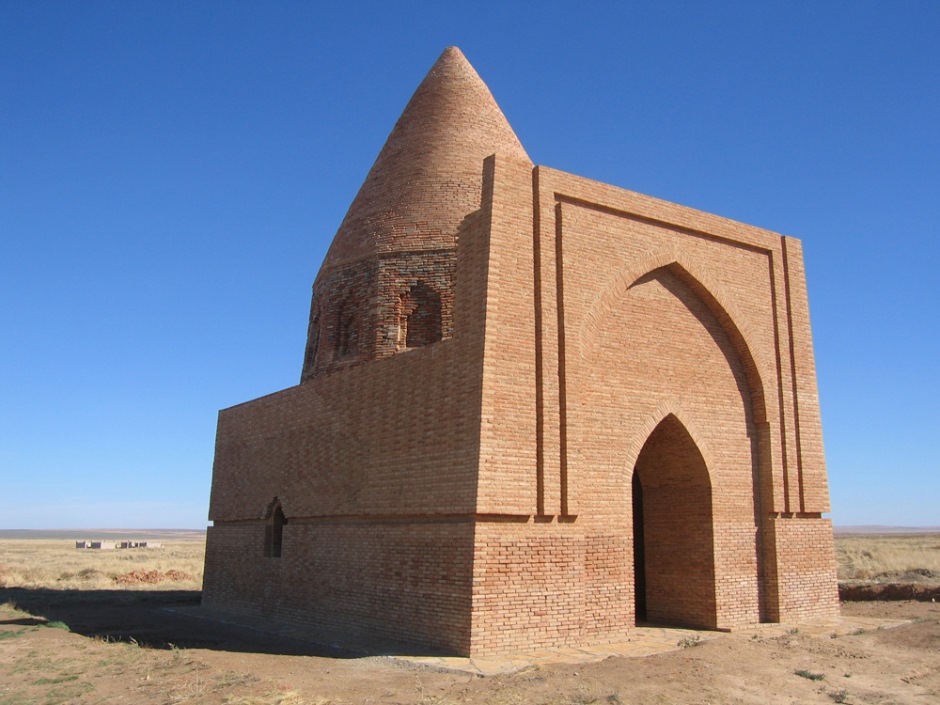 There are some legends with the origin of the name of the mausoleum in the society. The most common one says, that there Abat-batyr was buried, the son of the Kazakh philosopher-utopian of XV century Asan Kaigy. Abat-batyr defended native territory from the Kalmyks’ onrush and could win the Kalmyks’ khan in a fair battle. After that Abat returned the occupied territories to his tribesmen, moreover, as a consequence, the Kalmyks’ raids stopped. Abat tragically died in the stow Beskopa, when he was looking for good, free places for nomadic migration by father’s order. He was thrown by camel-zhelmaya and fell to death. The mausoleum was built in the shortest time by the whole population of the surrounding steppe. Hence comes the second part of the name “baitak”: wide, vast, and nationwide. The basic version of the legend narrated by the inhabitant of town Taldysai, Khobdy region Shaikim aksakal in 1980. The legend was widely spread among Kazakhs of Aktyubinsk region, particular, similar variants are recorded in Baigany region.

During the diggings on the territory of the burial The remains of three people were found. Typically, such buildings raised in honor of khans or descendants of tore. The Abat-Baitak mausoleum formed the basis of the formation of Kazakh necropolis of XVIII-early XX centuries to the south, to the west and north-west. It includes the gum-state mausoleum of late XVIII —early XIX centuries, built in imitation to the early monument and ensemble of magnificent different stela-kulpytas (more than 200). As a rule, they are installed from the west side of tomb mounds or mud-brick fences. The Abat-Baitak kulpytasy overwhelms with variety of types, unusualness of compositional and decorative solutions, and refinement of the carving. 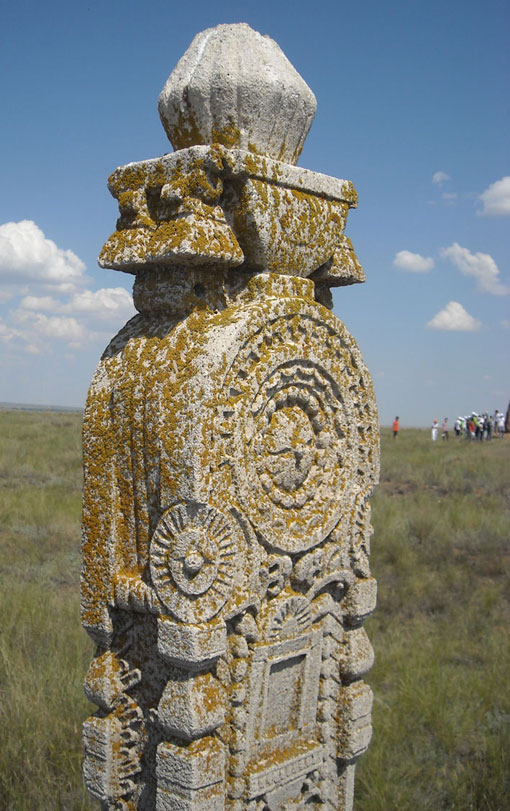 Archaic and early types of steles are emphasized among them, such as wonderful in its simplicity kulpytas, which is represented as fossilized tree, dug at the western sole of the tomb mound. This monument is a transparent retrospection on the genesis of the Kazakh kulpytas. Kulpytas by 1785/86 years — a simple faceted column with a semicircular maturation should be related to the early type. The planes of the stele are filled with the Arabic epigraphy of the religious content, which also plays a decorative role and accompanied with tamga signs. According to tamgas, there were burials of representatives of the Junior zhuz: tabyn, kete, alshyn, baibakty and etc. For majority of late (XIX century) steles of necropolis characterized by a combination of epigraphic and decoration, the last one mostly prevails, thus emphasizes kulpytasy as monuments of glyptic. It is possible to allocate the highest samples of fine stone-carving school of the middle of XIX century with the fine design of details. Floral motifs are very popular on the monuments of necropolis and often expressed in the extensional design of stele composition — shaped abutments in the forms of flower stems, the finial in the form of unopened bud and etc.

In general, kulpytasy of the Abat-Baitak necropolis is made in keeping with the concept of development of art stele of Western Kazakhstan. A large group of monuments refers to a distinctive type of massive steles with marked extensional-geometric solution of the constituent elements. However, among these types traditions of local stone-carving school are accented. Original kulpytasy also should be marked, tombs of late XIX century, by peculiar feature of architectural-spatial interpretation of the monument, uncharacteristic for vertical steles.

The mausoleum is visible from far off, from a distance of several kilometers, as if it undersets the sky. It’s like a light-house in desolated steppes for a lost traveler.