Home News Other History of Koreans in Kazakhstan

History of Koreans in Kazakhstan 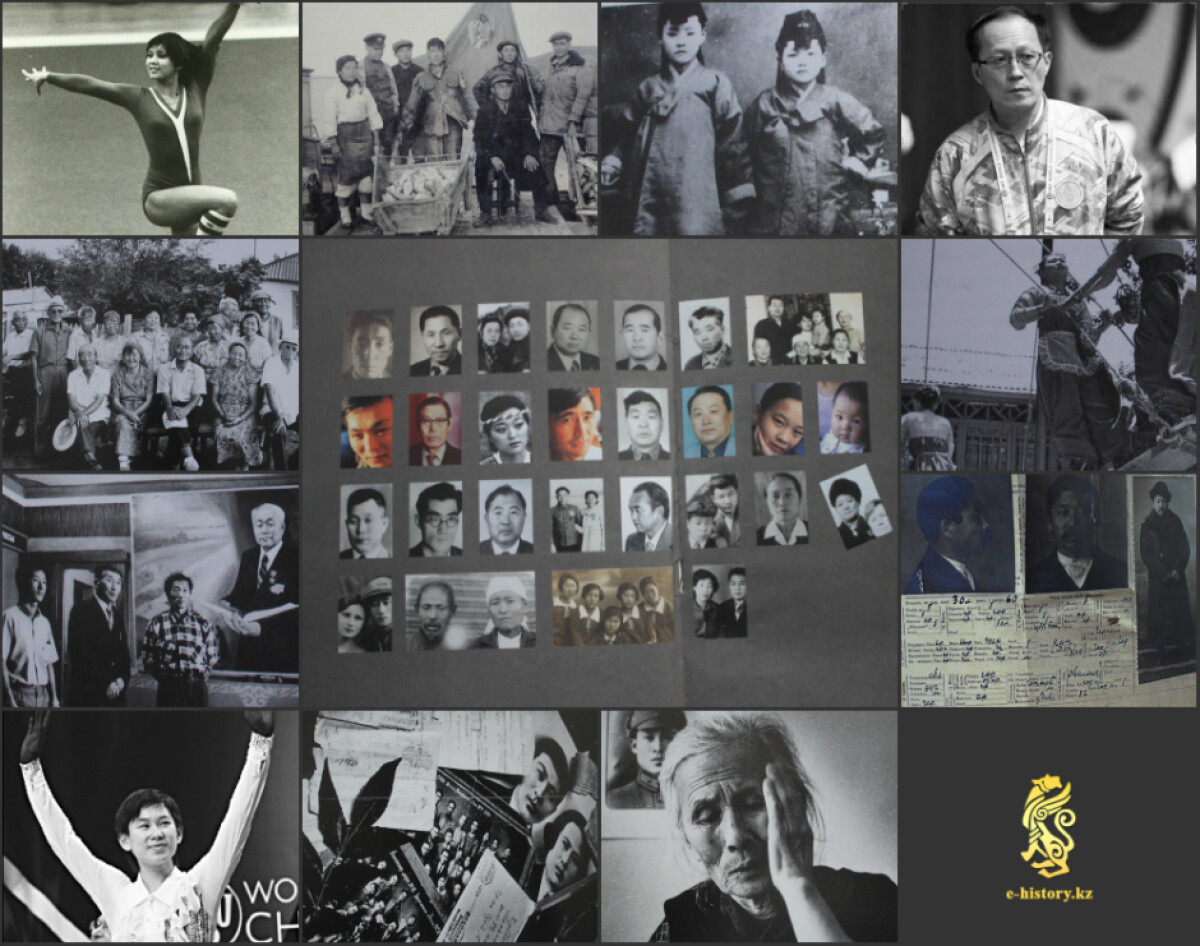 The beginning of XX century became the period of special and intensive moving of Koreans to the territory of Kazakhstan.
“In Kazakhstan your contribution into the development of

economic and spiritual potential of the Republic is highly valued,

the Koreans are known well as the great masters of

President of the Republic of Kazakhstan N. A. Nazarbayev

Historical tiesof Korea and the Koreans with Central Asian region and Kazakhstan are rooted in the depth of centuries. The landmarks of longstanding ties of the Koreans with Kazakhstan are known to the science. Ther roots of the Korean ethnic group originates from the peoples who inhabited the area of the Altai mountains, the anthropological studies and monuments of the folklore. History also knows about the existence of the powerful state formation emerged in the Altai region in VI century and having been spread its influence from Korea to the Black sea region.

It is known that in 727 the Korean monk Hechho was travelling to Central Asia. And in the famousTalass battle which took place in the summer of 751 near Taraz city between the Arabs and Chinese for the strengthening of the influence in the entire Central Asian region the General GaoXian Chi, Korean by origin, in Korean — Ko Seong Ji commanded the Chinese forces. Then, till XIX century there is no data on the ties of the Koreans with Central Asia.

For Korea the isolation is specific, it is no coincidence in the oriental studies it got the name “hermit country”, “forbidden country”. Therefore, further there are the events of XIX century connected to the waves of the Korean emigration to the Far East of Russia, occasionally these flows of the emigration reached Kazakhstan as well.

The data of the first national census of the Russian Empire, 1897 year

The first national census of the Russian Empire in 1897 officially registered the arrival of the Koreans to the territory of Kazakhstan and Central Asia. At that time several groups of the Koreans lived on the territory of the modern Uzbekistan, Kyrgyzstan. Theylived mainly in Kokand, Namangan districts, cities of Namangan, Pishpek (now Bishkek), Przhevalsk. But, by comparison, there were more of them inKazakhstan. Koreans settled in Semirechensk region in Vernensk district, in Vernyi city (now Almaty), in Dzharkent district, Dzharkent city. In Syrdarya region in Aulie-Ata (now Taraz), in Perovsk district (now Kyzylorda region) and in Akmola region. All of them were taken into account in the VIIth section of the census “Distribution of non-local inhabitants by place of birth”, their birthplace — Korea is given, and also partially in the XIIIth section “Distribution on native language”, where the Korean languageisgiven. At the same time they were not in the XIth section where the foreign subjects were made a census of. 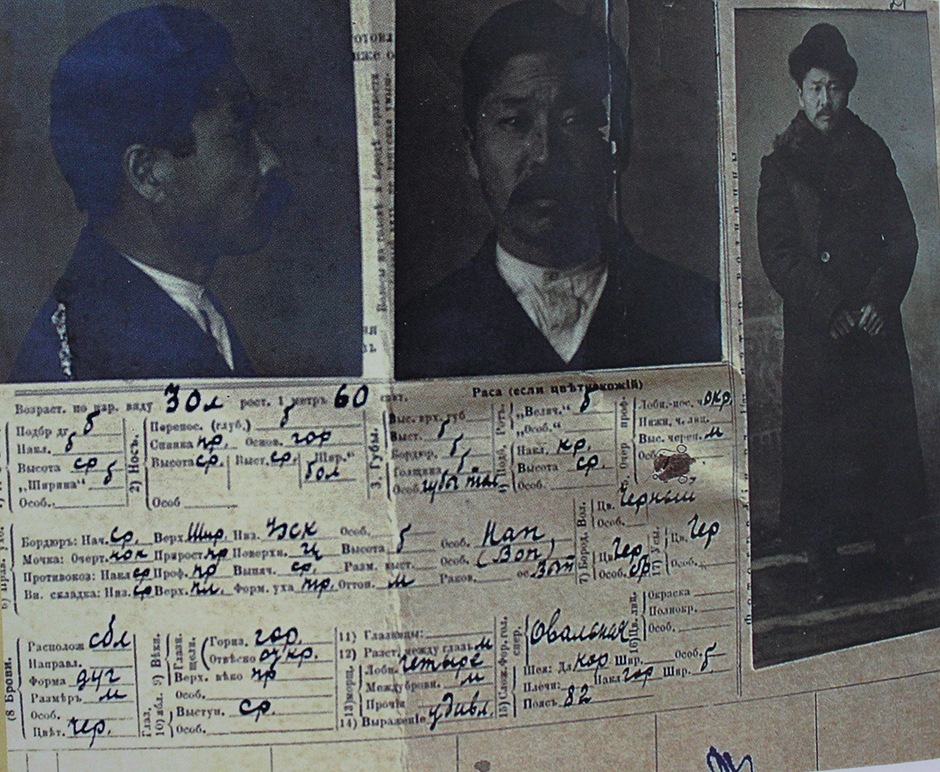 Document on the registration of the Koreans arrived to Kazakhstan. 1904 year 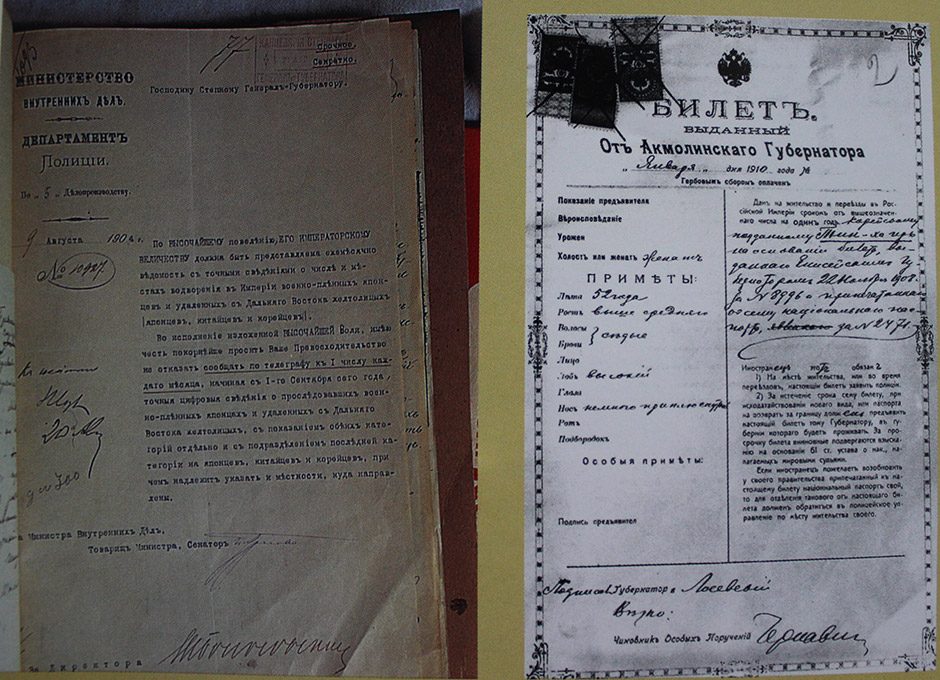 Ticket of the Korean for the residence in Kazakhstan, 1910 year

The beginning of XX century was the period of special and intensive moving of the Koreans to the territory of Kazakhstan. In the Central State Archive of the Republic of Kazakhstan the data on the arrival of Koreans to the land, on their activity, everyday life, joining to Russia, surveillance for them. Majority of them were christened as since the very beginning of the Korean emigration “certain measures for their quick Russification and merging with other population” were conducted in Russia and the foremost condition was the conversion of them into orthodoxy which could be evaluated as the adoption of the Russian citizenship. The Koreans took Russian names, they were forbidden to wear national attire and hairstyle. There are some Russian Korean names: Yu-On-Po — Vladimir Rafailovich Popov, Kim-Chu-I — Fedor, Chan-Hani — Alexandr Litvinov, Bak-Poshi — Vasily, Kisi-nepek — Vasily Nikolaevich Pihtovnikov, An-in-sep-I — Savrasov Alexandr Romanovich and so on. 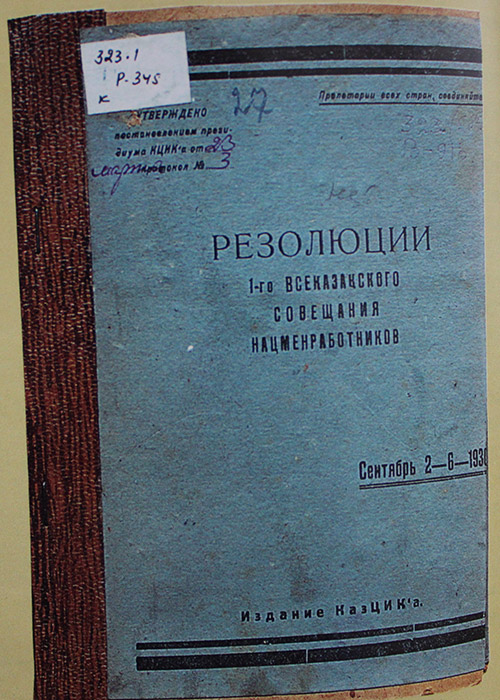 agricultural work of the Koreans, 1930 year 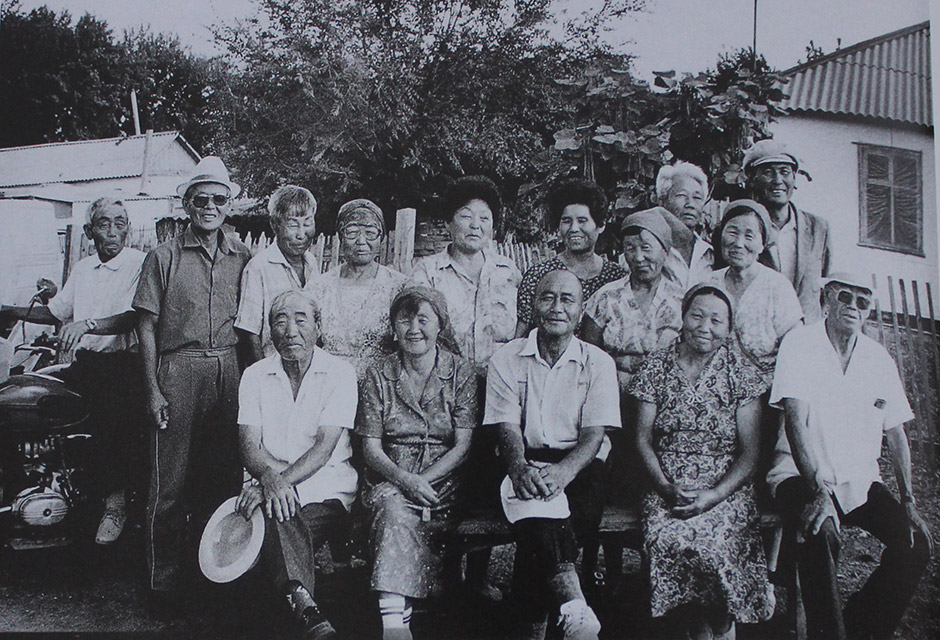 Veterans of the agriculture of Karatal district 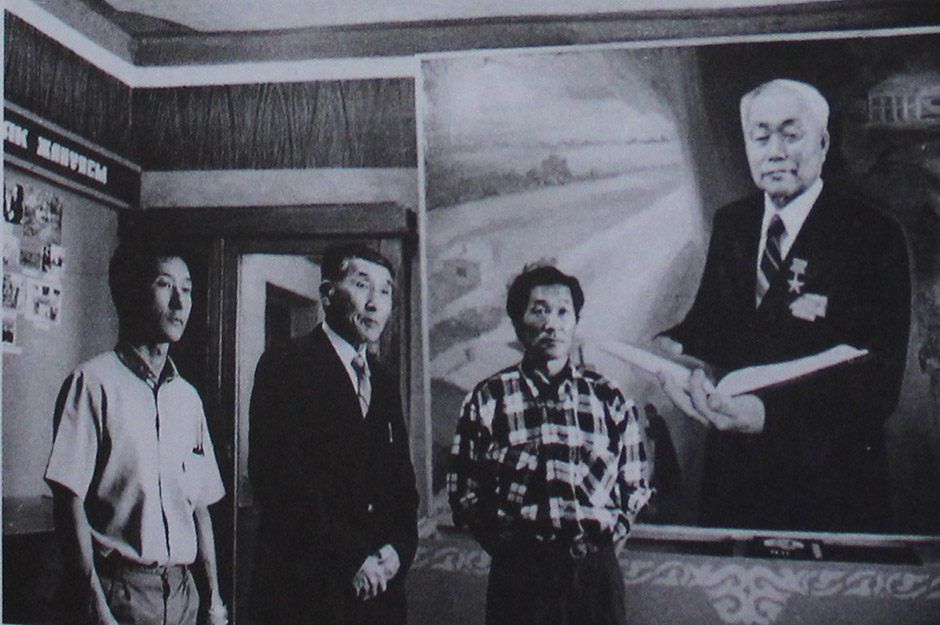 After the establishment of the Soviet power the first census of the population in the USSR in 1926 was carried out. According to its data, dozens of the Koreans lived in Akmola, Semipalatinsk, Syrdarya regions, several Koreans lived in Karaganda, Kyzylorda and other regions of Kazakhstan. In the 20s, in Kazakhstan in connection with the development of rice growing, the experience of rice growing in various regions of the Union was initiated for study, and the crop variety testing began. In the whole given work the attention was drawn by the Korean experience of the rice cultivation in the Far East. The conclusion was as follows: in Kazakhstan in the development of the rice cultivation it is necessary to take the same path as the one of the Far East. In the Far East the Koreans took the land for rent on the enslaving terms, and in Kazakhstan these terms were much better, and, as the heads of the republic thought, that will push the Koreans for the resettlement to Kazakhstan. Thus, the decision to invite the Koreans to Kazakhstan in order to gain the experience in rice growing was taken. In the spring of 1928, upon the invitation of the People’s Commissar of Agriculture in Kazakhstan, 70 families, more than 300 Korean rice growers and silkworm breeders arrived at the Semirechensk province from Vladivostok district, the Far East area. “The Korean Agricultural Labor Association “Kazakh Rice” (Kazris) was organized by them. In January 1919 the Koreans started to send the rice seeds to other farms. So, in 1931 Kazakhstan became the most rice-seeding region in the country. It is worthy to note that the Kazakhs and Koreans had the similar culture, national games and elements of the arts and crafts which we tried to show on the following photographs. 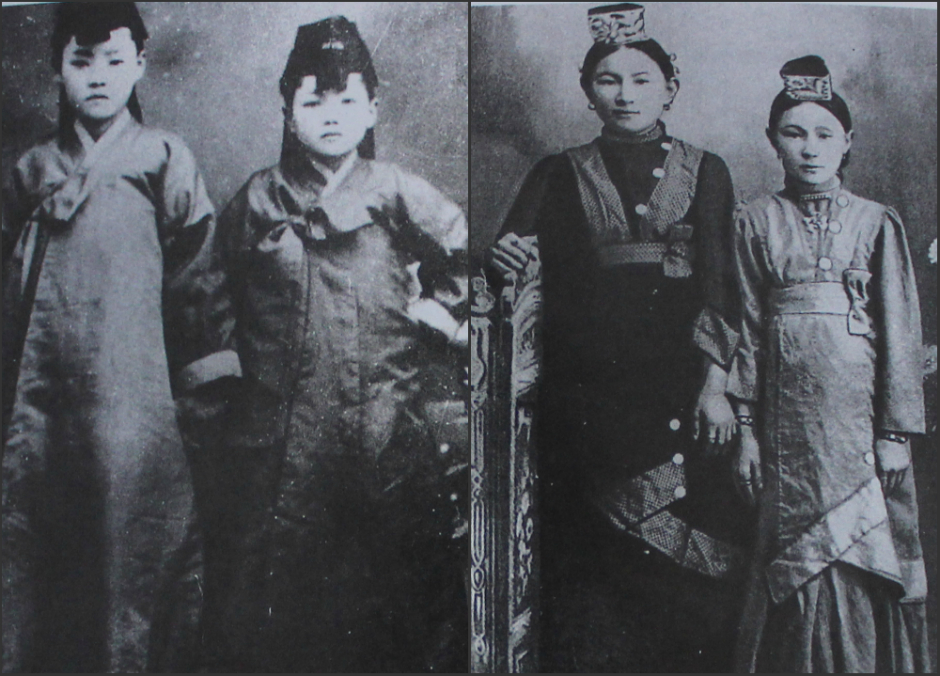 On the left are the Korean girls, on the right — the Kazakh girls

On the left is the sample of the Korean ornament, on the right — the Kazakh carpet tykyr-klem 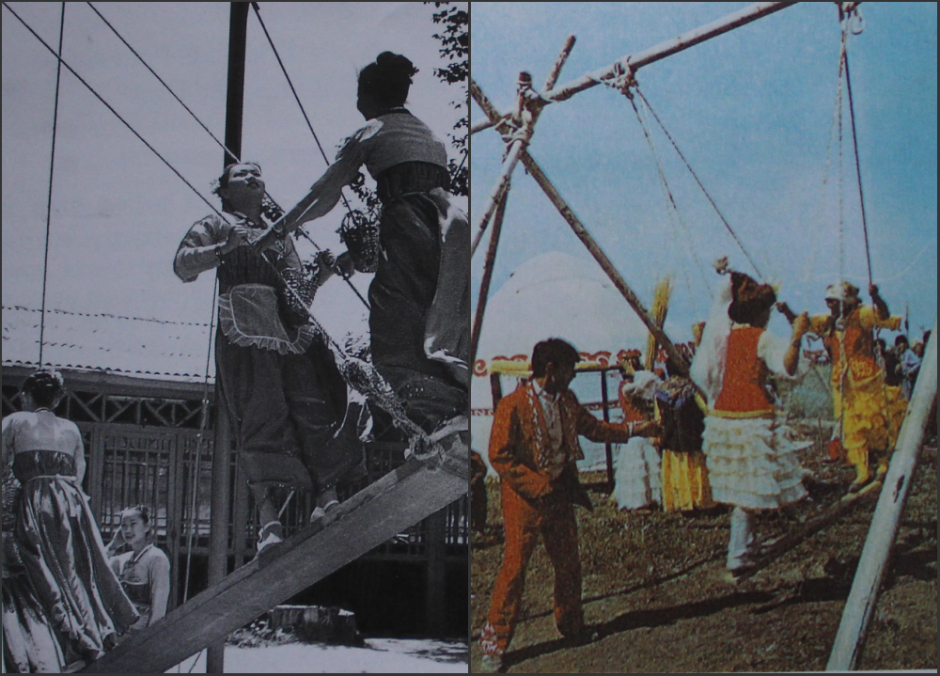 On the left are the Korean - Kulgas, on the right the Kazakh swings — Alty-bakan

During their living in the Kazakhstan land, the whole series of talented artists, doctors, athletes, scientists, architects, writers, honored workers of the Republic of Kazakhstan had risen. The repertoire of the Korean theater staged the classical works of the Kazakh, Russian and Korean authors. There are well-known artists such as Kim Vladimir Egorovich, Kim Dina, Kim Rimma Ivanovna, Lee Nikolay Petrovich, Kim Gennady Sergeevich, Seong Lavrenty Dyadyunovich, Seong Georgy Nikolaevich and others. The Candidates of Science, docents, who prepare qualified specialists, work creatively in higher education institutions along with the Doctors of Sciences. We will name only some of them: Kim Galina Vasilyevna, Lee Sergey Vasilyevich, Kim German Nikolaevich, Pan Nikolay Grigoryevich, Kwon Lyudmila Aleksandrovna, Myung Dmitry Volbonovich, Yugay Elizaveta Sergeevna and many others. The Union of Korean writers whose works are full with national flavor. They are novelists, playwrights and poets: Yen Syung Nyung, Kan Alexandr, Kim Kwan Hyun, Yang Won Sik, Nam Heren and others.

The success of the Koreans is known in sports as well. In the 70-80s the Olympic World, European and Kazakhstan Champion Kim Nellie was making a success on the gymnastic floors. Tskhai Yriy Andreevich (now the president of the Association of Koreans in Kazakhstan) made a significant contribution to the development of boxing in the USSR. The athletes of the highest class who became the European champions, Olympic medalists, USSR and Kazakhstan champions were trained under his supervision. The graduates of the honored USSR coach Hwang May Undenovich became the World, Europe and country champions and record-breakers in skating. AfamousKazakhstanifigureskateractingin singles, bronze medalist of the Winter Olympic games 2014 Denis Ten repeatedly raised up the flag of Kazakhstan. It is important to notice Alexey Gennadyevich Ni — the weightlifting coach in Kazakhstan who trained several Olympic champions and medalists including Ilya Ilyin, Zulfiya Chinshanlo, Maya Maneza and Svetlana Podobedova. In the sphere of football the senior coach of Ust-Kamenogorsk “Vostok”, Tselinograd “Tselinnik” and Almaty “Kairat” Chen Ir Song/ Chen Andrey left a bright mark.

All the abovementioned is the minor part of the history of the Koreans in Kazakhstan. They gained the new motherland, and their deep roots in the Kazakh steppe depict the ability to live in mutual understanding and unification with the peoples of Kazakhstan. During all these years the Koreans demonstrated themselves as the hardworking and peaceful nation, whose history is not separated from the history of Kazakhs.