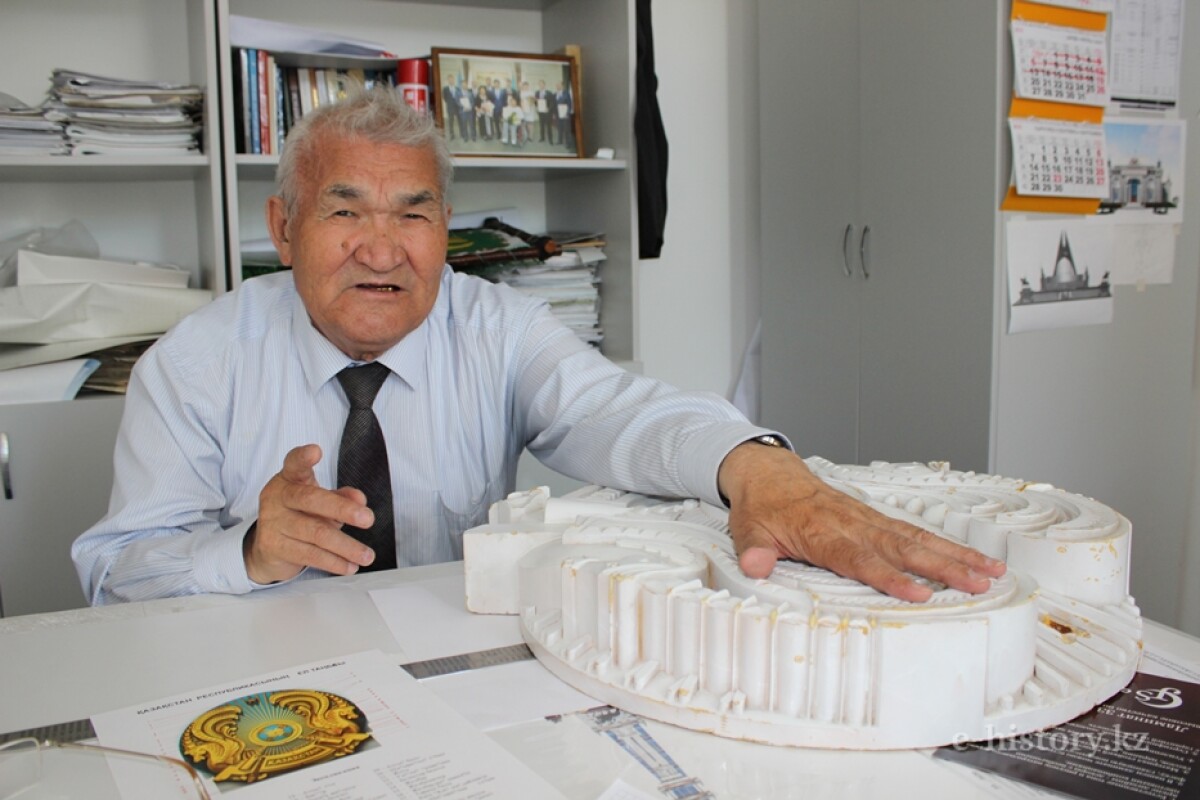 Zhandarbek Malibekov is the honoured architect of Uzbekistan, author of the National Emblem of the Republic of Kazakhstan. He was born on 24 March 1942 in the village of Yekpindi, Zhanakorgan area, Kyzylorda region. He graduated from the Architectural Department of the Tashkent Polytechnic Institute. The chief architect and head of urban planning workshop of the Uzbek Research Institute of Industry was directly involved in designing the airport in Andijan, facilities of the regional post service in Fergana, regional administration, drama theatre and Central Library in Samarkand, several residential micro districts in Angren, Fergana and Samarkand. — Please tell us about your family and childhood

— I was born on 24 March 1942 in a railway worker’s family in Zhanakorgan area, Kyzylorda region. The name of my father is Malibek Andabayev. He worked for Turksib until 1955. For his work during the Great Patriotic War, he was awarded a great number of orders and the most important — the Order of Red Banner of Labour. That was a rarity. My mother died when I was a child but had managed to give birth to the three sons: Shabdarbek, Aidarbek and Zhandarbek. We were representatives of the Junior Zhuz, the Naimans. The place of my birth is sacred. Around 3000 years ago the site of Syganak was founded there. The Kok Kesene Mausoleum was not far from there and very often passed by it going to my school. Marco Polo wrote that it was a unique architectural structure. The building was lined with small green terracotta tiles. I spent my childhood there.

— What about your school years?

— The situation was very complicated. In the 1950s, people in our village couldn’t read and write. I remember the time when workers used fingerprints to sign for their salary. There were only few madrasahs and those who graduated from them could teach exclusively religious subjects. I finished ten school grades. I remember that instead of a school building there was a barrack and children were taught by those who returned from the war (Great Patriotic War — Ed.). After my graduation, I had no idea what to do. I was always interested in painting. In the Pionerskaya Pravda, I saw an announcement of the Tashkent Art School and decided to apply for its programme.

— You hadn’t job and money when decided to study at the Art School in Tashkent. How could you reach the city?

— At the age of fifteen or sixteen I produced approximately ten thousand mud bricks and thus earned money for the trip. But I was afraid to go there. Without telling anybody, I took the train to Tashkent to apply for entry to this university. When I arrived in Tashkent it turned out that the deadline had already passed.

— And what did you decide then?

— I was embarrassed. I met one person who studied at the Polytechnic Institute. He recommended me to enter that Institute. I went there, passed four exams and was enrolled as a student of the Department of Architecture and Construction. Thus, I was involved in the sphere of architecture; in childhood I even didn’t know what it was.

— How was it to study at the Institute?

— The first three years we worked and studied in evenings. I studied six years there. The last three years we spent all our time for studying. At that time, the Soviet Union had a good system of internship and we were sent to Central Asia and Europe. Our student group was universal and included electricians, painters, masons, and to name but a few. After the fourth year, we were sent to a university in Kiev. We were entrusted to repair the Department of Chemistry. We finished the job within three months. That was the first serious project for me. Then we travel to Riga and Moscow. Once I was sent to Greece as a head of a group. The Greek architecture was very beautiful, unique but not simple at all. Since that I became more interested in my profession. The combination of theory and practice made me a professional.

— How did you establish your own family?

— When I visited my relatives in Kyzylorda they always asked me about marriage. At the age of 27 I seriously thought about it. My future wife studied with my cousin in Kyzylorda. Once I saw her and decided to marry her. We got married in 1969. Many people asked it was love or not. But that was not so important. I believe that understanding and respect are more significant. I have three sons. All of them studied architecture.

— For so many years, you lived in Uzbekistan. How did you return to your native country?

— After graduating I asked to send me to Kazakhstan but was left in Uzbekistan. During seventeen years, I supervised construction of all objects in Samarkand. I had a dream to come back to Kazakhstan. In 1992, I was 50 years old. Kazakhstan gained its independence. Call for the design of national symbols was launched and I was invited to participate. To develop the National Emblem, I examined a great number of symbols both Kazakh and symbols of other nations. Kazakh Zhuzes had more than 300 tanbas (emblems — Ed.) and I didn’t use any of them. The reason is that the National Emblem should reflect the whole history of our country, its past, present and future. Thus, the competition helped me to return to the native land.

— Would you like to add something as a conclusion of this interview?

— I would like to express my opinion concerning the modern architecture. Today we live in separate houses and do not know our neighbours. We have become insensitive to other people. This is partly can be explained by the modern architecture as new houses restrict us destroyed our traditions and everyday life, communication and language as well. Our ancestors lived in such unique architectural constructions as the yurt and all Kazakh traditions were kept in it. Therefore, I consider yurt to be a unique invention of world civilization. I asked students: when was it invented? Nobody can answer. And I answer my own question: yurt emerged when the first Kazakh was born.

— Thank you for taking the time to speak with me, I wish you good luck and health!