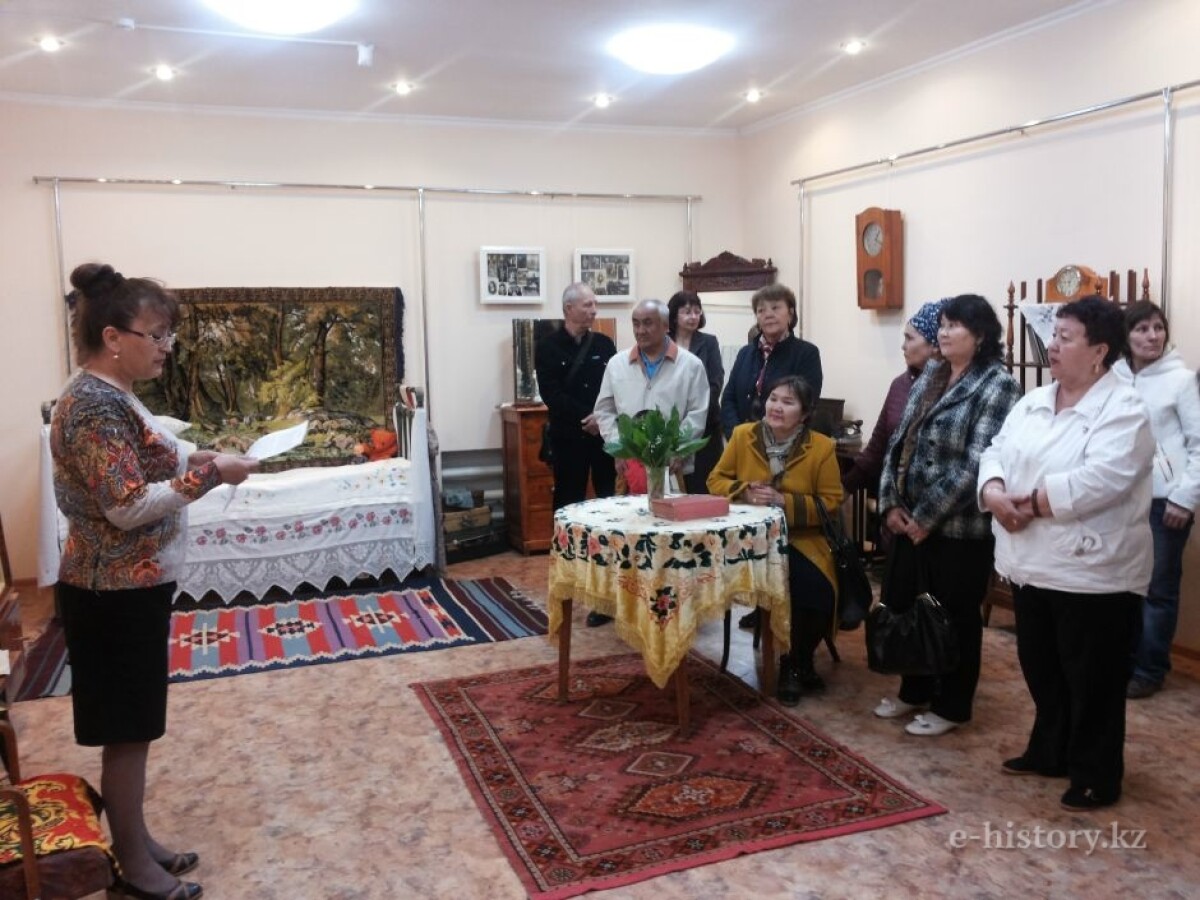 The Old Apartment retro exhibition at the Museum of the History of Kokshetau demonstrates interior of a Kokshetau apartment in the 1950-60s. That period is very interesting for historians as after the Great Patriotic War people were tired of all difficulties and paid much attention to home coziness. After the war, they were full of optimism and preferred family values. Some of the things, that were traditional for that period, are presented at the exhibition.

Thus, for example, a round or oval table covered with velvet or Chinese silk tablecloth, and a dark sideboard were general interior items of sitting rooms in the middle of the 1950s. There were wine glasses, small glasses and vases in the sideboard. Porcelain statuettes of animals, characters of folk tales, children, ballerinas as well as woodworks (traditional presents for anniversaries) were important décor elements.

There is a separate exposition of a bedroom. The old carpet hangs on the wall. At that time, tapestry and plush carpets depicted various scenes. The iron bed is under the carpet. Several pillows with lace cover are placed on the bed. There are suitcases of various sizes and colours near the bed. The chest of drawers placed near the bed is covered with lace cloth. And a lot of framed small photos are presented under the chest without a certain order. Turned yellow with age, the pictures are evidence of ties between relatives, members of families and generations. 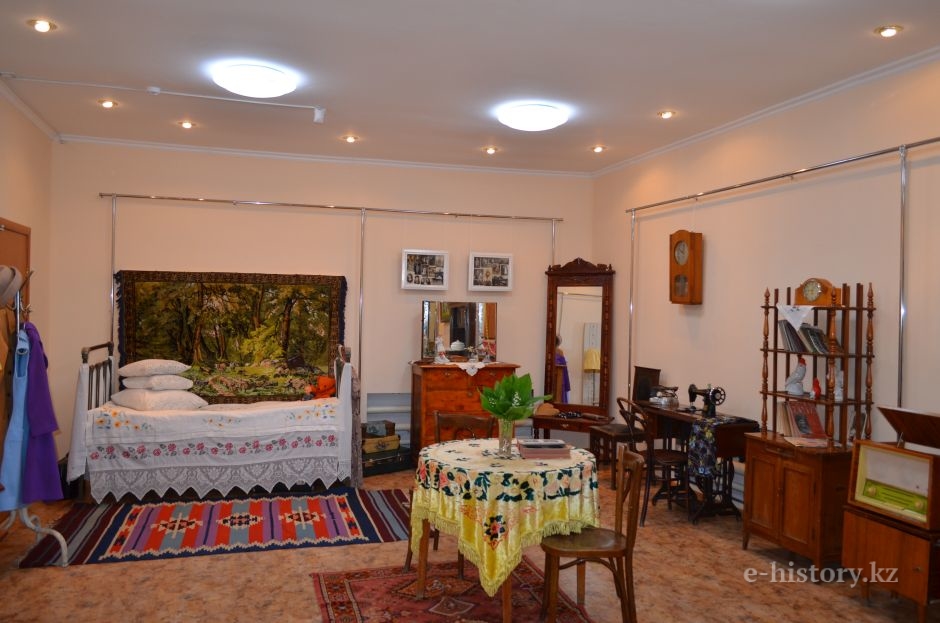 The pier glass is another part of the exposition. Bottles with perfume and caskets with buttons are placed on it. The sewing machine on the forged little table is next to the pier glass.

During the period of Khrushchov’s reforms, the main symbols of home comfort were coffee tables, low light armchairs with polished armrests and standard lamps. Books occupied a special place on shelves. There was no opportunity to purchase books anywhere until the 1960s and people had to keep pre-war editions. But after the war they filled shelves with lots of books. In the 1960s, it was fashionable to have big wall clocks in apartments.

Handmade wooden or plywood cupboard was an important element of the kitchen interior in the 1950s. It often had a removable top with glass doors. Sometimes the shelves were decorated with lace cloth. If it was necessary women painted or lacquered the cupboard.

Gas stove and fridge were the new items for kitchens in the 1950s — early 1960s. On 9 February 1962 the Kokchetavskaya Pravda wrote the following about the history of gas stoves "... in Kokchetav they are highly valued by women. No one another stove allows cooking dinner so fast... ." The price of the gas cylinder was three roubles and each was enough for four or five months. The Omsk Council for National Economy (Sovnarkhoz) supplied gas. The stove presented at the exhibition was donated to the Museum by Nina Perepletkina, a resident of Kokshetau.

For a long time fridge in the Soviet country was considered as a luxury product. Fortunately, after the war the Soviet Government changed its opinion. Several factories were aimed at the production of refrigerators. In 1956 Soviet people had an opportunity to purchase legendary "ZIL" (Zavod imeni Likhazheva — Likhachev’s Factory). But the constructors didn’t take into account one thing. In 1961, Gagarin became the first man in space and inspired all the Soviet boys to play and imagine that they were cosmonauts as well. This fridge locked a young cosmonaut until his parents returned from work. Later manufacturers started using magnets and fridge wasn’t dangerous toy anymore. But, in fact, high durability and maintainability made ZILs almost "immortal". The fridge presented at the exhibition was donated to the Museum by Yunya Loiko from Kokshetau. 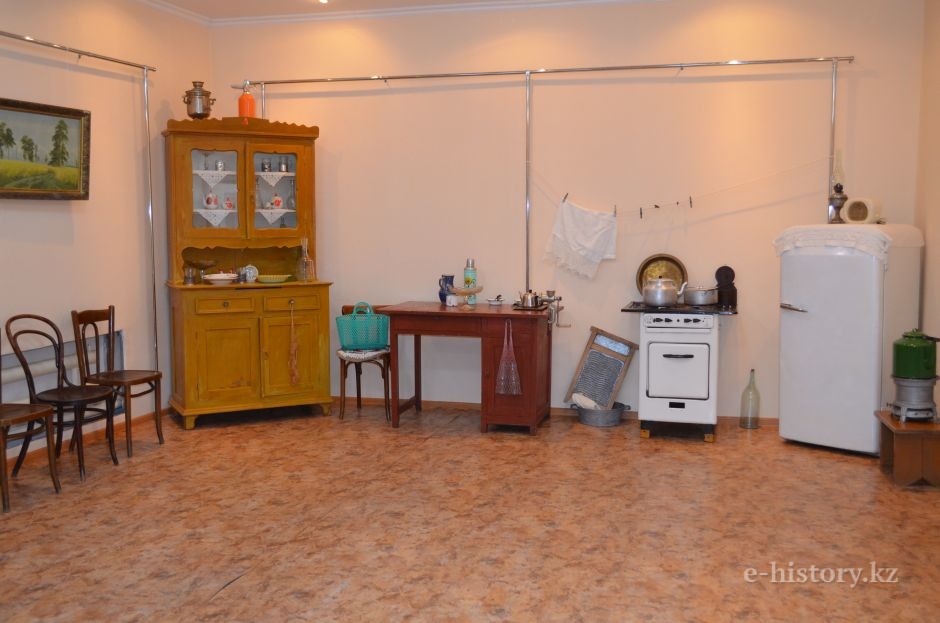 In those early days, it was very popular to have radio equipment, including radio, transistor, players, radio-gramophone and radio cassette player. The collection of the Museum of the History of Kokshetau includes such items produced in the 1950-60s. The exposition of the "apartment" presents Oktava speakerphone, produced in Novosibirsk in 1953 (was donated by Maria Molotkova), and Yugdon desktop radio-gramophone of 1963 (was gifted by Lydia Babich).

There are also some kinds of dresses, dishes and other exhibits reminding us about the past epoch.

Most exhibits were brought to the Museum at various times and as a result of the research activity of the Museum staff, including Gulmira Zarapova. For example, the bed, pier glass, cupboard, sewing machine, shelves and some other exhibits were donated to the Museum by her relatives and friends.

The Old Apartment retro exhibition gives an opportunity to go back in the history and see the life of the Soviet people in the middle of the 20th century.

The Old Apartment retro exhibition will remain at the Museum until August 2015.