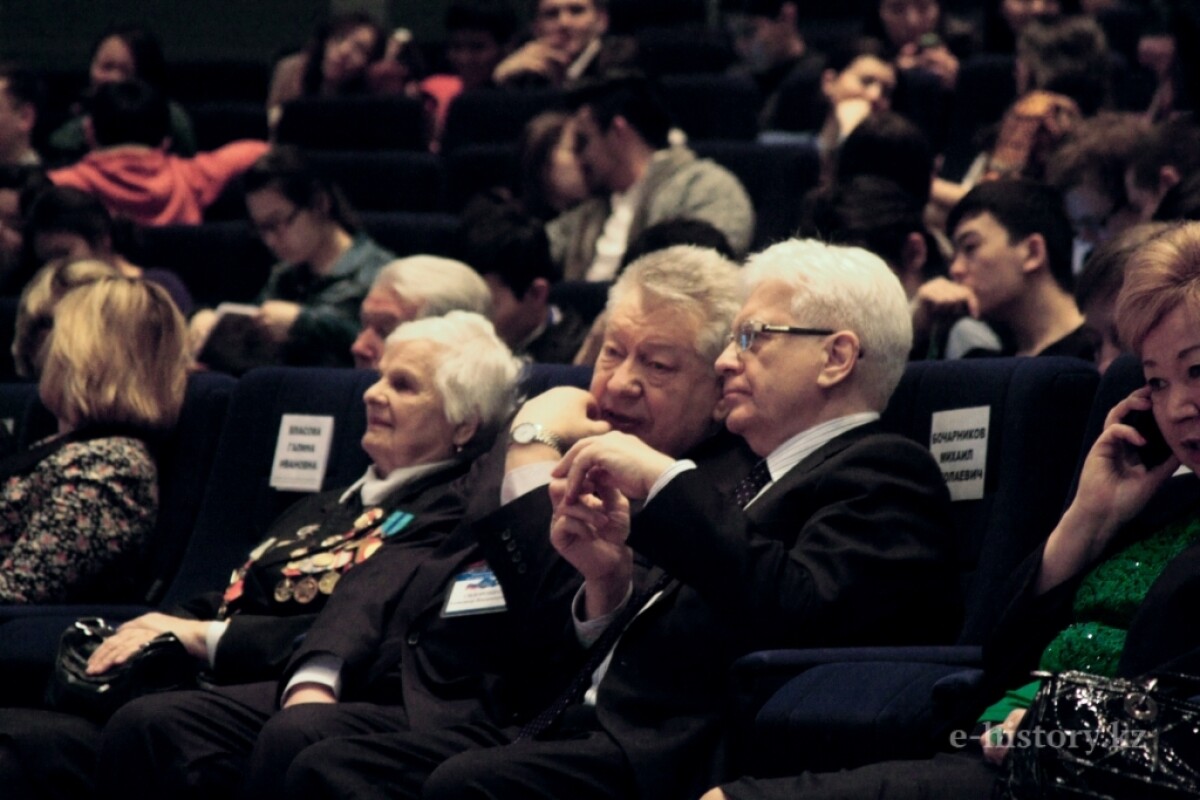 On Friday, April 10th, the solemn ceremony of opening "Lomonosov’s readings" took place. Such conference for the first time was in 2002 and each year is important event in scientific sphere, which urged to strengthen international relations in Eurasian space and support undertakings of future scientists.

As representatives of Presidium of conference this year were chosen: Director of the Kazakhstan MSU branch, professor A.Sidirovich, Plenipotentiary Ambassador of the Russian Federation in Kazakhstan M.Bocharnikov, vice-chairman of Assembly of the people of Kazakhstan A. Bashmakov, deputry of Mazhilis of Parliament A. Bimendina, Doctor of Philosophy R. Abdildina and representative of faculties. The veteran of the Second World War M.Poltoratskaya became the honorary member of Presidium this year.

This year conference coincided with tree significant dates, which were separately marked in statement of Presidium: 70th anniversary of the Great Victory, 260th anniversary of the Moscow University and 20th of the People’s Assembly of Kazakhstan. Welcoming participants of readings, representatives of Presidium paid close attention on the theme of war and contribution of students, faculty of Moscow State University in the approximation of the Great Victory.

— The duty of each of us is finding the ways to make world better and avoid new war, — said the director of branch of MSU A.Sidorovich. When veteran of war came to tribune, everybody unanimously stood, paying tribute to her merits for the country. M. Poltoratskaya simply and touchingly told her story: death of the brother near Brest, secret penetration on the front, difficulties of a wartime and participation in fights. "War not a game. It is the tragedy", — finished her speech Maria Poltoratskaya.

In completion of plenary session diplomas were handed to the students who won in the republican Olympic Games and competition of scientific works, then A. Sidorovich declared conference open, and participants of "Lomonosov readings" dispersed on the sections. This year directions of scientific works were: mathematics, ecology, economy, philology. Numerous problems of cultural integration and formation of the Eurasian space were discussed in the section "Eurasian space: values, traditions and interactions". Outstanding poet, translator, traveler and researcher Chokan Valikhanov, who made an essential contribution to development of cultural ties between Russia and Kazakhstan, was at the center of discussion.

On April 11, in the second day of "Lomonosov readings", the results were summed up. 283 works of students were allowed to participate in conference and young scientists from 41 universities of Kazakhstan and Russia. Within a meeting of sections 128 reports in which actual issues of modern science were touched were presented. At the plenary session devoted to closing of the 11th international Lomonosov-2015 conference, the best reports were noted by diplomas 1st, 2nd and 3rd degrees.