Home News Other The old-timer building. Mausoleum of Aisha-Bibi

The old-timer building. Mausoleum of Aisha-Bibi 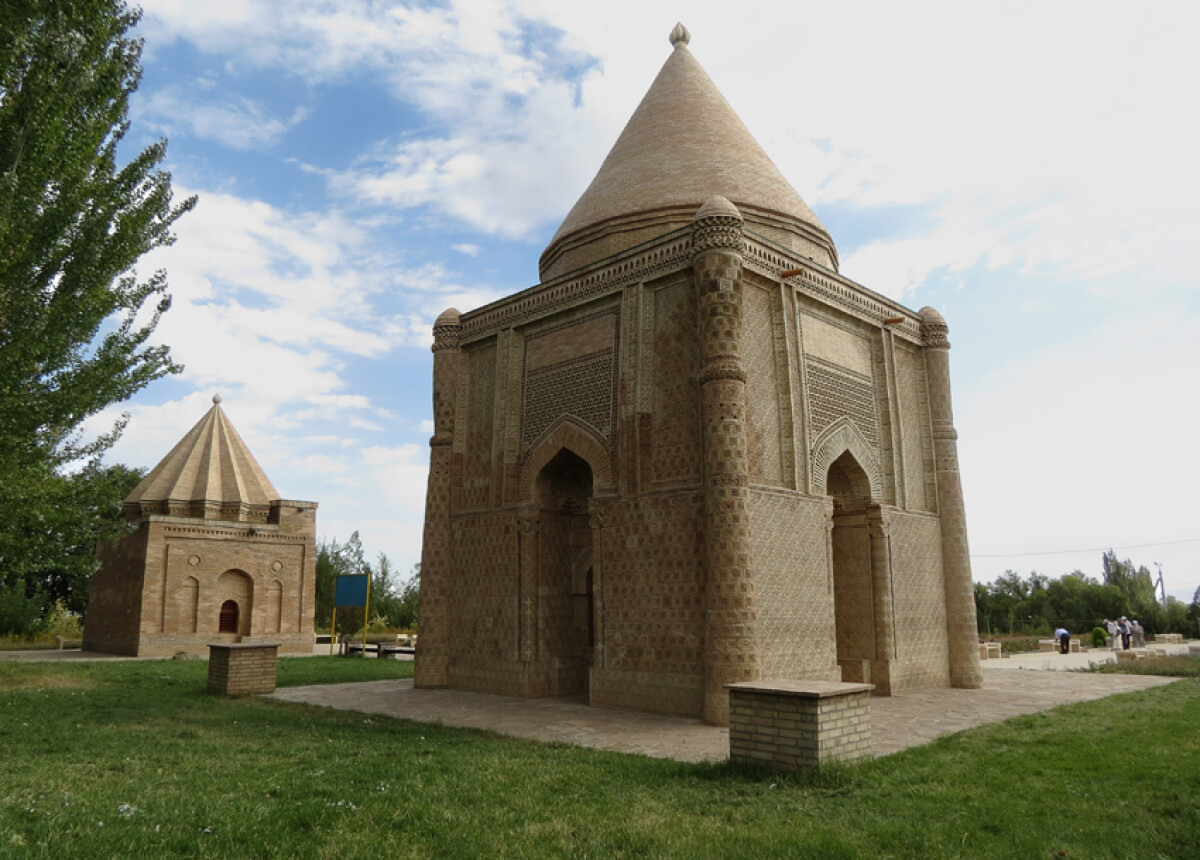 Mausoleum of Aisha-Bibi is a historic building of the 11th – 12th centuries. It is situated in the village of Aisha-Bibi, Zhambyl region, about 18 km away from the city of Taraz.

Mausoleum of Aisha-Bibi is a unique architectural and historic object of the Republic of Kazakhstan. The façade is decorated with ceramic tiles of different shapes and various patterns. Variety of bricks, which were used for the construction, is amazing. However, western wall is the only part of the mausoleum which has been preserved to the present day in its original decor. Mausoleum of Aisha-Bibi is on UNESCO World Heritage list. In 1897, the ancient building was examined by a famous orientalist V. Kallaur. In 1938-193, he building attracted an expedition of the Institute of History and Culture of the Kazakh Branch of the Soviet Academy of Sciences. In 1953, an expedition of the Academy of Sciences of Kazakhstan was sent there to study the monument. Today most patters are preserved on the western wall of the mausoleum. The smallest pictures can be found on the other sides of the building. The tiles contain over 60 various patterns. The mausoleum is a square building measuring 7.6×7.6 metres. The corners are strengthened by columns-pillars. A gravestone is situated in the centre of the building measuring 3 by 1.4 metres. The western wall of the mausoleum and columns are decorated by small ornamented tiles. On one of the columns at a height of 3,4 meters there is an inscription in Arabic which is translated as "autumn, clouds, rotating world...". The 80 centimetre thick walls consist of three parts, including inner surface made of burnt bricks, outer surface of tiles with carved pattern and the space between them filled with clay and debris of defective plates. The monument attracts pilgrims and tourists by its unique architecture and wonderful legends telling about boundless love of beautiful woman Aisha-Bibi and batyr (warrior) Karakhan. There are 28 versions of this legend. According to it, Aisha died on the way toward her lover Karakhan because of the bite of a dead snake. Karakhan constructed the mausoleum on the grave of Aisha and willed to bury him at the place from which the mausoleum would be visible.

The building has been standing for more than eight centuries in defiance of winds and bad weather as a witness of the great love. Women come to this place to pray about marital happiness and children. It is believed that those who visit the mausoleum on their wedding day will have long and happy lives.

In 2001-2004 the historic building was reconstructed. During this period skilful restorers produced decorated tiles with the use of traditional methods. The foundation of the mausoleum was strengthened, inner and outer domes were constructed. The territory of the mausoleum was fenced, improved and electrified. The mausoleum of Aisha-Bibi is included into the list of historic and cultural monuments of republican importance and taken under state protection.

Photos are taken from http://culturemap.kz/kk/object/mavzoleiy-aiysha-bibi, http://kazakhstan.travel/kz/attractions/attraction/583 and personal blog of journalist Maxim Rozhin