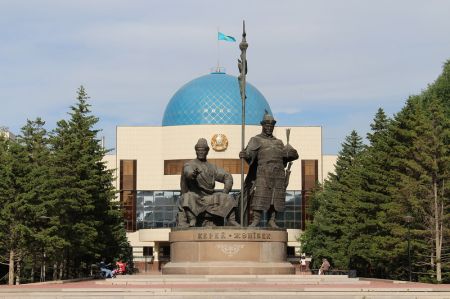 The exhibition "Kazakh Khanate: Great Figures of the Great Steppe" will be opened on February 25, 2015 at the Museum of the First President of the Republic of Kazakhstan, Astana

Opening ceremony of "Kazakh Khanate: Great Figures of the Great steppe" fund exhibition of fine arts and decorative and applied art will take place at the Museum of the First President of Kazakhstan on February 25, 2015 at 5 p. m. The exposition represents several museum collections on the history and cultural heritage of traditional Kazakh society.

The purpose of this exhibition is to show the bright figures, significant events in the history of the Kazakh Khanate which played an important role in establishment and strengthening of the Kazakh statehood.

Wide picturesque panorama of history of the Khanate will be recreated by works of famous Kazakhstan artists, sculptors, jewelers, restorers.

An especial place in the exposition will be taken by artifacts: a fragment of Abylai Khan’s famous sabre with donative inscription on behalf of the Russian empress Elizabeth I, helmet of Bolek-batyr, and also reconstruction of rings with seals of Kazakh khans executed with all historical authenticity by K. Altynbekov and reproduced with spun gold in art panels by A. Abdubait.

Many of the exhibits will be presented to a wide audience for the first time. In this series, an especial place is occupied by unique panels dated to the period of Qing Dynasty of China. They depict the procedure of the diplomatic exchange of gifts from different states at the Chinese imperial court. Among these diplomats, there are also representatives of the Kazakh Khanate. So unique archival and graphic sources were found in archives of the People’s Republic of China and their authentic copies are made on the initiative of the Ambassador Extraordinary and Plenipotentiary of Kazakhstan in the People’s Republic of China Ermekbayev N. B., nowadays the Assistant to the President, Secretary of Security council of RK.

"... The historical horizon of existence of the Kazakh statehood goes far beyond the twentieth century ..." - N. A. Nazarbayev writes in his book "In a stream of history". Detailed studying of history of the Kazakh Khanate and its heritage became possible since gaining state independence by Kazakhstan. Search for national identity, statehood sources, caused special attention which is paid to celebration of the anniversary of the Kazakh Khanate. It is symbolical that the exposition will be represented in the Dome hall of the Museum of the First President of Kazakhstan under arches of which the new capital of Kazakhstan was officially proclaimed in 1997. The atmosphere of the Dome hall is saturated with the spirit of freedom, unity of the people of Kazakhstan and continuity of its ideals.

The exhibition "Kazakh Khanate: great figures of Great steppe" will last until September 28, 2015.

Use of materials for publication, commercial use, or distribution requires written or oral permission from the Board of Editors or the author. Hyperlink to Qazaqstan tarihy portal is necessary. All rights reserved by the Law RK “On author’s rights and related rights”. To request authorization email to mail@e-history.kz or call to 8 (7172) 57 60 13 (in - 1163)
Қазақша Русский English
MOST READ
Month Year
Kazakh historical drama Tomiris premiered in Istanbul
ALASH IDEA IS THE PROTECTION OF KAZAKH STATEHOOD
Stolypin about the worries and hopes of immigrants to the Kazakh steppes
A tireless explorer of the Kazakh land
SWITCHING TO THE LATIN ALPHABET – UNITE ALL KAZAKH PEOPLE
Kunaev Dinmukhamed Akhmedovich
People who eat horses will kill you
Kazakhstan's participation in the Winter Olympics has a long history
Rebooting a field of science and education
Recorded history of Kazakhstan. Part 1
Historical Dates on the Bosphorus
Recorded history of Kazakhstan. Part 2
Materials on theme
Hall of Graphic Arts and Sculpture opens in the National Art Gallery “Astana”
Cultural Walk: The Museum of history of Turkic writing
Tours by the museum's halls
The National Museum starts celebration of Nauryz Meyramy