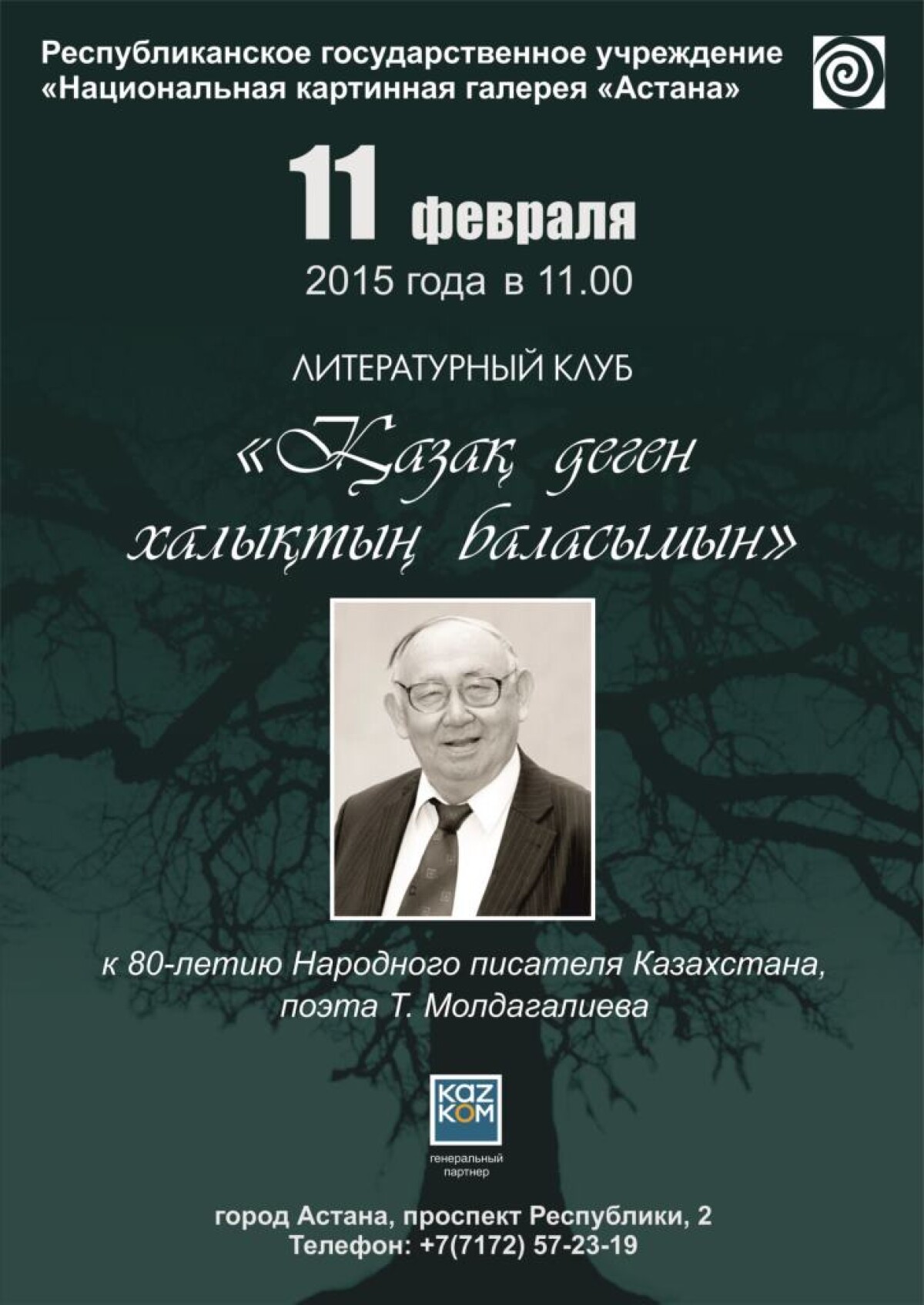 On February 11, 2015 the Literature Club of the National Art Gallery “Astana” hosts a meeting dedicated to the 80th anniversary of people’s writer Tumanbay Moldagaliev

Everybody knows poems of the unsurpassed Kazakh lyric poet. The literature meeting at the National Art Gallery "Astana" includes a recital of some of his poems, singing songs written on the basis of his poems and remembering the brightest moments in his life.

Tumanbay Moldagaliev’s lyric poetry can be found in songs of the following famous composers: Seydolla Bayterekov, Shamshi Kaldayakov, Kenzhebek Kumisbekov, Erkegali Rakhmadiev. The song "Armanymnyn ak kusy" ("The White Bird of My Dream") by Nurgisa Tlendiev has long been a very popular among people. The songs "Kua bol" ("Be a Witness"), "Zhuregimnin sozi" ("The Words of My Heart"), "Sen menin animsin" ("You are My Song"), "Saryarka" ("Saryarka"), "Zhan dosym" ("The Intimate Friend"), "Koktem keldi" ("The Spring Has Come") are appreciated by our people as well. All of them are based on works of Tumanbay Moldagaliev.

Upper secondary education students from the schools of the city of Astana are invited to participate in the literature meeting.

We remind that Tumanbay Moldagaliev was born on March 20, 1935 in the state farm "Zharsu", Yenbekshikazakhskiy area, Alma-Ata region. The poet graduated from the Kirov Kazakh State University. After graduation Tumanbay Moldagaliev worked for the Leninshil Zhas newspaper, literary worker of the Pioneer journal, senior editor at the Zhazushi (The Writer) publishing house, executive secretary of the Baldyrgan journal, chief editor at the Zhazushi (The Writer) publishing house, chief editor of the Zhalyn publishing house, secretary of the Executive Board of the Writers’ Union of Kazakhstan, and so on.

He was People’s Writer of the Republic of Kazakhstan, co-author of the text of the National Anthem, and poet singing of the nature and love. Tumanbay Moldagaliev became a popular poet in the middle 1950s.

In 1954 he published his first poem named "Ukrainskoy devushke" ("To the Ukrainian Girl").

In 1957 his first poetic book "Studencheskaya tetrad" ("The Student Writing-book") was issued. Later the author published his collection of poems and songs written together with famous composers, including N. Tlendiev, Sh. Kaldayakov, A. Beyseuov. The following songs were among them: "Kamila" (1960), "Vesennie zori" ("Spring Dawns", 1961) and "Pesn o Feruze" ("The Song about Feruza", 1964).

Tumanbay Moldagaliev was a skilful translator. He translated works of foreign classical writers into Kazakh language.

The famous Kazakh poet Tumanbay Moldagaliev passed away on October 10, 2011 at the age of 76.