Home News Other Warpath of the writer

Warpath of the writer 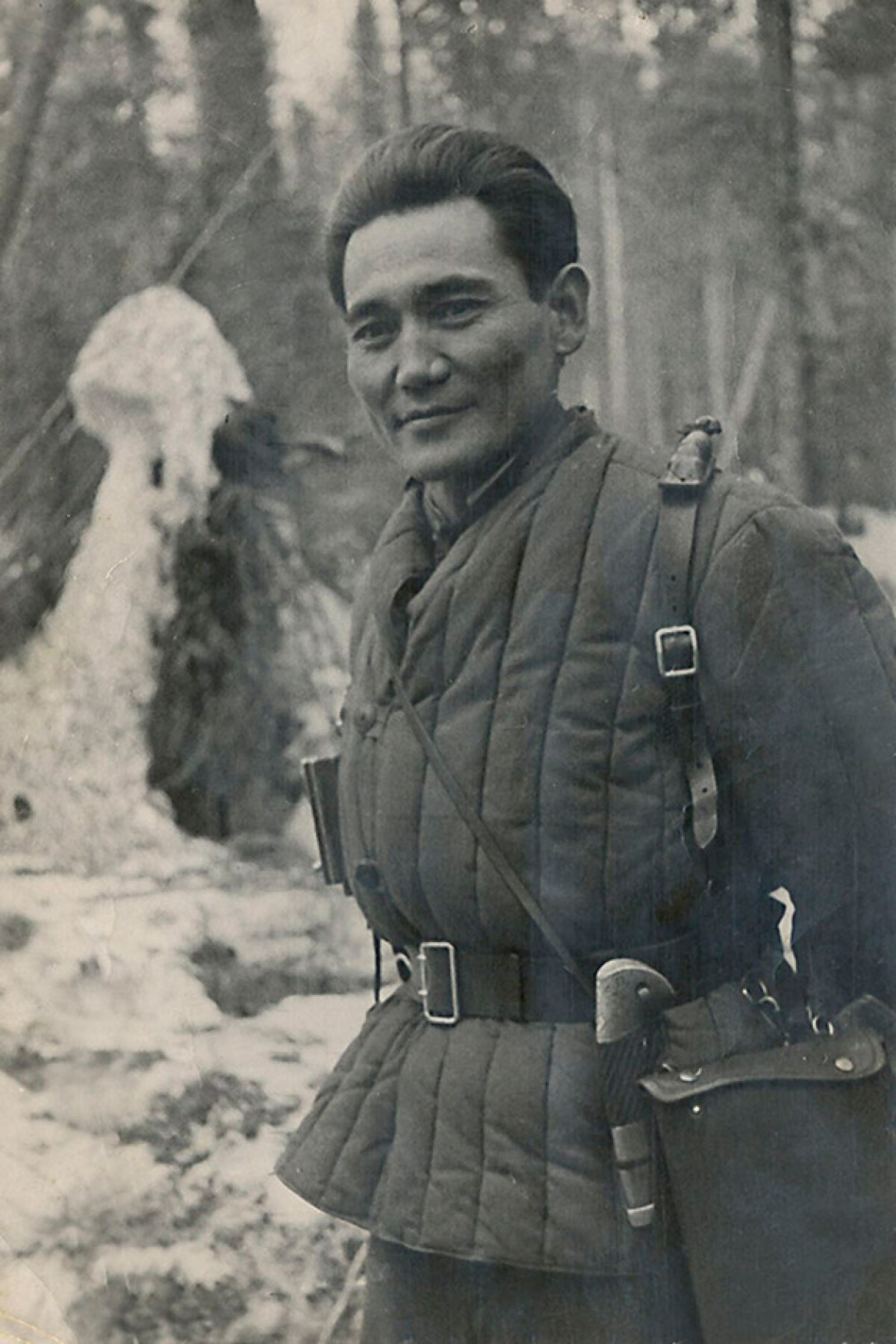 This year the legendary soldier, hero of Soviet Union and writer Baurzhan Momyshuly would be 105 years old.

Bauyrzhan was born at ordinary peasant family on December 24, 1910. After graduation of nine-year school worked as a teacher at school, the secretary of district executive committee, in financial bodies and as the chief of regional police. In 1936, he came on service to the Soviet Army and served in the Far East. In 1938, he participated in fights with Japanese Kwantung Army. In 1939–1940 he served in Ukraine, participated in campaigns to the Carpathians. He went to the front of the Great Patriotic War as the part of the 316th shooting division under command of the major general Panfilov.

The legendary Panfilov’s man, the participant of a battle of Moscow Bauyrzhan Momyshuly became person of legend during his lifetime. "The glory about him for the first time has been spread in November-December, 1941 in fight for Moscow. At that time all front, army, central newspapers and logs of the Soviet Union, particularly Kazakhstan wrote about him. They wrote passionately about talent of the commander of a first line, who several times performing the task of command with the battalion remained in a surrounding of the enemy and brought it to the troops without any losses" — said the writer Elen Alimzhan. 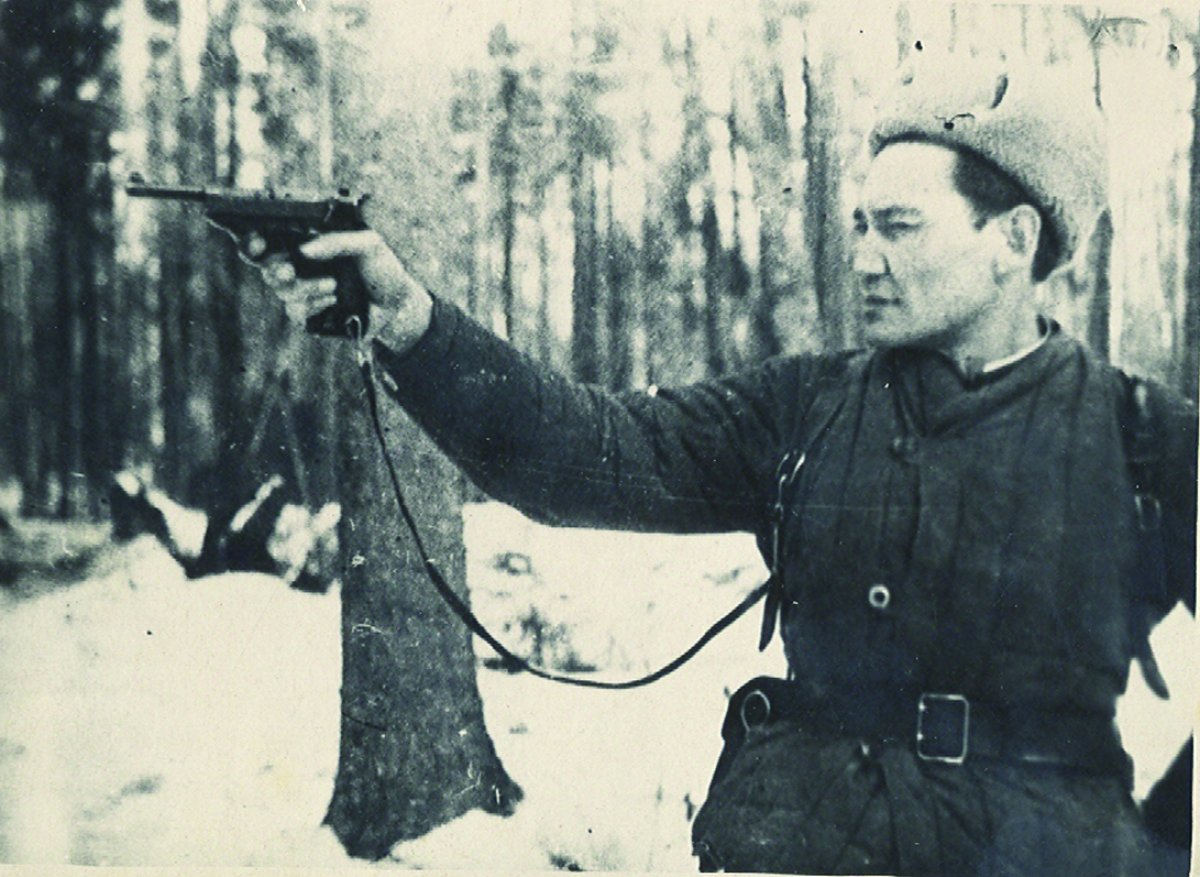 In 1941, as the commander of the battalion of the 19th Guards shooting regiment Bauyrzhan Momyshuly carried out 27 successful fights near Moscow in the conditions of maneuverable defense. For fights on Volokolamsk’s direction the general Panfilov suggested to award senior lieutenant Momyshuly to the Order of Lenin. In 1942, senior lieutenant B. Momyshuly headed the 19th regiment who participated in fights for station and settlement Kryukovo, where he was severely wounded, but continued to command. Considering all services in battles, the commander of the 8th Guards shooting division colonel I. Serebryakov in August of the same year suggested to provide Bauyrzhan Momyshuly to assignment of a rank of the Hero of the Soviet Union. In 1944, Serebryakov one more time appealed in the Presidium of the Supreme Soviet of the USSR with the application for assignment of the tittle of Hero to Kazakh batyr (hero). At least three times Bauyrzhan Momyshuly was given the highest honor for fighting feats, courage and bravery, but every time a prize leaf was "lost". There are well-known words: "If you won’t catch lead in a breast, will you get medal "for courage"? In case with Bauyrzhan Momyshuly the response is definitely negative.

After war, he became graduate and teacher at High Military Academy of the General Staff of the Soviet Army. Although, the title of "Hero" still was not given to him. In 1956, despite prestigious military career, military achievements and recognized innovative ideas in the field of tactics and guiding of fight, the fearless Kazakh solider were dismissed. "Inconvenient" — said shortly Bakhytzhan Momyshuly about the attitude of the authoritative body towards his father. "He was perceived as the inconvenient person therefore bypassed awards and ranks". In addition to the fact that he was misunderstood, he was envied".

Elen Alimzhan also tries to find an explanation for why Bauyrzhan’s achievements were underestimated". During war nobody openly accuse him in nationalism. Despite that Bauyrzhan Momyshuly was extremely frank and critical there were no words and actions that would contradict the Constitution and legislation of the USSR. Although, Moscow authority body decided to punish him by silence and ignore, having left him without the rank of the Hero of the Soviet Union and other awards".

Nevertheless, he received the Star of the Hero 8 years later after his death. It was happened on the eve of disorder of the Soviet Union and obtaining of independence by Kazakhstan. In the congratulatory telegram Nursultan Nazarbayev wrote: "The day when to Bauka (Baurzhan Momyshuly) received the Star, can be considered as the day when the Star of the people was raised". 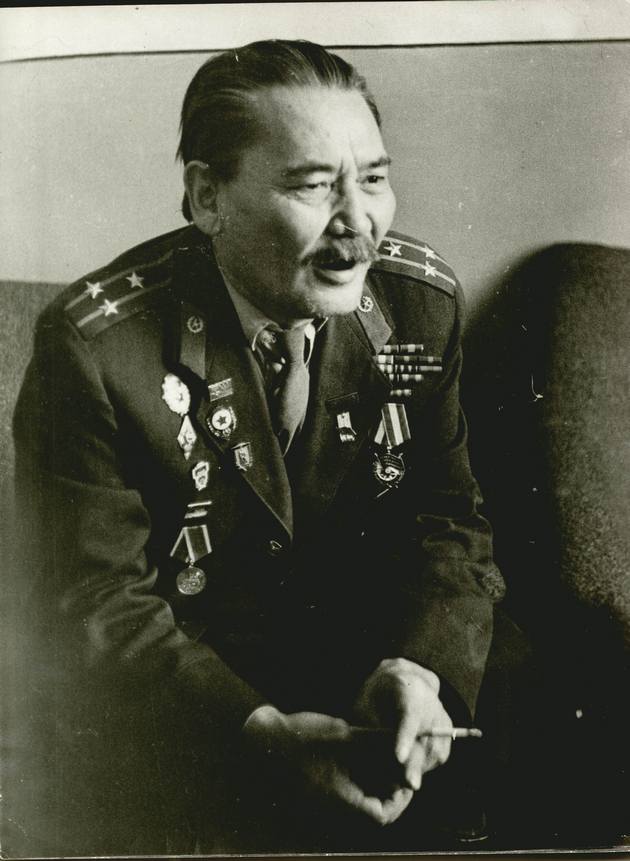 A lot of books, poems were written about Bauyrzhan Momyshuly more than any famous person in our time. Acquaintances, old friends, family members — all of them marked extraordinary complexity and even cruelty of character of Bauyrzhan. And only his son Bakhytzahn in his books of memories devoted to the father frankly tells what stood behind this external severity of the legendary hero.

"Yes, he was sharp and spoke with raised voice that offended many people, but I think that he splashed out burning pain and unspent energy in these shouts".

"He used his rough straightness there where he considered it is necessary, and in other cases he had a good sense of humor. Once a person named Nabiden who used to write came to my father and began to complain that he has no contacts in Alma-Ata, and that he wants to become the member of the Union of writers. He led my father to know that he needs recommendation from him. Bauke responded: "I generally do not give them to anyone", Nabidn rushed to beg, and father wrote to the first secretary of the Union of writers a note of the following contents: "Accept this fool to the Union of writers. If you will accept him, another fool will be more". And what you think? Nabiden went with this note to Anuar Alimzhanov, who at that time was the first secreaty of the union, he read it, laughed and at the following meeting of the secretariat Nabiden was accepted to the union".

War tempered his character. He was very self-disciplined and demanded it from others and even from his single and beloved son.

"What he was as a father? He was very strict. In school days when parents of my schoolmates sent them to vacation to the Black Sea, Moscow, Leningrad and other cities of the Soviet Union, he sent me to village where lived his relatives. He always was dissatisfied with me. Several times he said: "I regret that you were not beaten up by corporal". Indeed, compare with him I was undisciplined. He called me plasticine (modelling clay) from which anything could be mold; sometimes he called me gruel… It seems to me that he regretted that I did not wear a military uniform. He believed that firstly it disciplines externally and then internally. 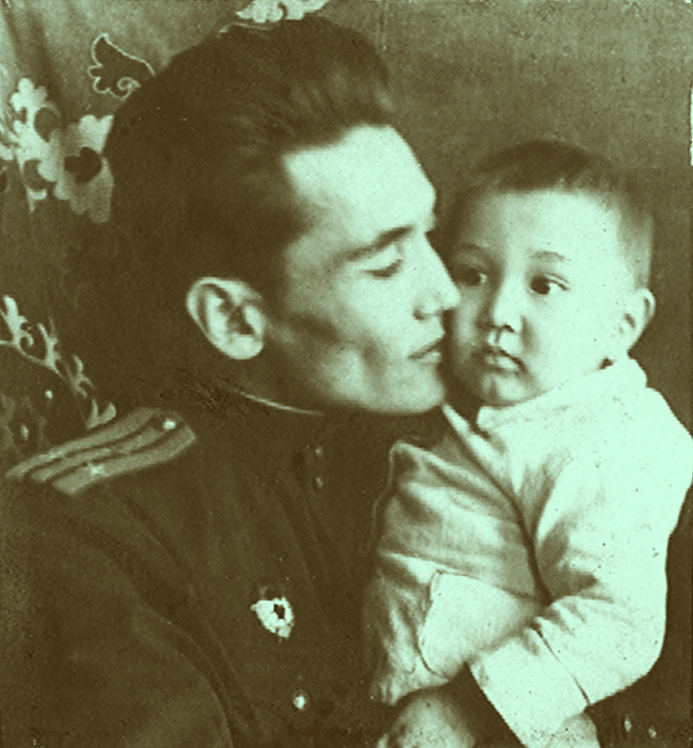 Although, he appeared as strict person, inside he was very caring father. He taught me to appreciate the home, take care of the wife. Again, he sent me to the village thinking about my future. If not these trips, which terrible offended me, then maybe I would not avoid the drama of an entire generation of Kazakhs — I would know neither native language nor customs. And thanks God I don’t feel like a stranger among my people".

And only his son could able to understand father’s character with the blood-stained print of the endured war.

"Suddenly, or maybe not, I understood that behind each of his words there are huge wisdom and meaning. Once, for example, he said that not all participant of the war is warrior, and added: "And not everyone who wears a military uniform is soldier". I understood it in following way: soldier — it both a state of mind and other worldview, also high sense of patriotism and great feeling of compassion to unprotected.

Concerning last I can be objected: Bauyrzhan Momyshuly was often harsh, intolerant and even rude. Yes, yes, yes! He actually expelled some people from the house with loud abuse. Once I asked him: "Why do you hate them?" He became sad and told: "I do not hate specific person, but his vices". It turns out that these people came to him with immoral and dishonorable requests. For instance, to help to release prisoner or dismiss unwanted official".

The legendary hero met many different people and under different circumstances, all of them have in memory their own Bauyrzhan Momyshuly. One point that all of them have common is that Bauyrzhan Momyshuly was the real hero and patriot of the homeland. "Legendary person, with extraordinary personality, multi-faceted not only with courage of character and military prowess, but also as talented writer and researcher of soldier’s psychology in extremal conditions of the military situation. He was genuine warrior and hero. Moreover, he was a man of his own independent worldview. He was ardent and patriotic — not only as a citizen and soldier of the Soviet country, but also as Kazakh, who loves his country and his people" — will write about him the statesman and publicist Mikhail Isinaliev.

Bauyrzhan Momyshuly began to write before the war. According to his son, in the family archive there are notebooks with the records made in 40s, 30s and even 20s. Many of these records were used as the basis of the books "Volokolamsk Highway", "Moscow behind us" and "Story of one night". He kept records in notebooks, on scraps of paper and even cigarette packs, and he did it continually. He wrote in the trenches, in the dugout and even in the hospital. Writing was his greatest necessity of life.

Well-known journalist Beket Momynkululy had an opportunity to see his diaries. In these diaries Bauyrzhan mastered language and style of the officer who will become the famous writer. His short sayings remind aphorisms: "I prefer death than immoral glory", "Thrown up shall manage to look back on the sides and down, to answer a question "where came from?", "where going?","who waits and obeys — cannot create", "laws were created only to frighten citizens, not to help them", "Talent needs to be able to live".

Bauyrzhan Momyshuly gives lectures, does reports, dictates to Alexander Beck the story of "Volokolamsk Highway" and appears on radio, such topics of articles and interviews appeared on newspapers in the middle of cruel fights.

The novel "Moscow behind us", released in 1958, brought fame to the writer. The book is devoted to fighting feats of 28 Panfilov’s men protecting Moscow. He wrote what he saw and experienced at the front that remained in memory for the rest of life.

Bauyrzhan Momyshuly entered to history of military science as the author of tactical maneuvers and strategy. He gave lectures on combat training in the High Academy of the General Staff, as well as during visit to Cuba in 1963. Today, his "Psychology of war" remains the deepest analysis of psychology of the soldier. In the military educational institutions of the USA, Cuba, Israel and Nicaragua separately teach military study of Bauyrzhan Momyshuly. He was an idol for Ernesto Che Guevara, and "Volokolams Highway" was one the favorite books of Fidel Castro.

Bauyrzhan Momyshuly — hero, patriot, writer and Kazakh who gave us the Great Victory and life without war.