In search of ancient cities of the eastern Aral Sea region 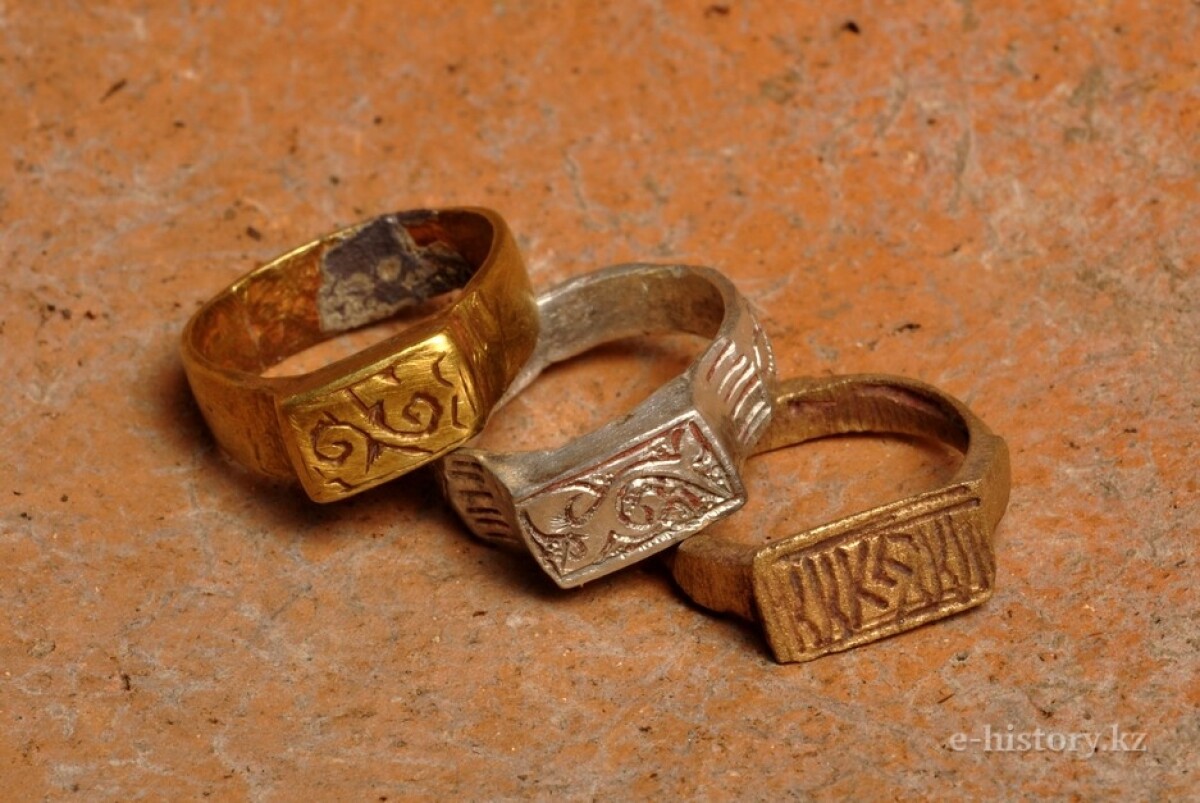 The names of ancient cities of Dzhend, Asanas, Barchkent have long been known. Archaeologists K. Baipakov and D. Voyakin try to answer the questions of where are they situated and how they look like.

Historical tradition has preserved perception of the Syr Darya as a border between two worlds — Northern Turan and Southern Iran, pastoralists and farmers, cities and steppes. The Syr Darya had different names, including Yaksart in antique sources, Yinchyu-uguz in medieval Turkic chronicles and Seykhun in Arab sources.

Kazakh part of the Aral region (eastern Aral region) is a clayey plain bordering the Aral Sea from the East. Contours of the region look like a giant triangle, which occupy more than 400 square kilometres in a latitudinal direction and 200-250 kilometres in meridian direction. There are four systems of ancient Syr Darya channels in the eastern part of the Aral region, including Inkardarya, Zhanydarya, Kuvandarya and Prakuvapdarya (or Eskidaryalyk). They radiate out of the Syr Darya bed to the south of the city of Kyzylorda.

This was a region of interaction between various cultures, a type of crossroads for migration and trade, a place of coexisting of different peoples. In this regard, S. P. Tolstov named this area the Aral hub of ethnogenesis.

The history of study of the Aral region and Southern Kazakhstan began in the second half of the 19th century after their joining to Russia. An extensive research was conducted during the Soviet period. A new stage in this process was adoption of the Cultural Heritage Programme in 2004. Archaeological researches were carried out in numerous settlements located near the ancient channels of the Syr Darya River. During the excavations researchers collected and processed and analysed significant flow of information related to history. Frequently written sources provide scientists with a small portion of information. Therefore, the history conceals numerous questions which are very important for reconstruction of a general historical background. Cities are integral part of human society which is reflected in their material objects such as buildings, streets, fortifications, tools and household amenities. That is why cities can give information both on material life and social structure, internal processes and spiritual quests of a society.

Identification and integrated study of ancient cities mentioned in narrative sources are one of the most exciting and important tasks in the sphere of history and archaeology of the eastern Aral region. The cities are Dzhend, Asanas and Barchkent. Their names are well known but the exact location is unrevealed.

Many historical events are connected with the medieval city of Dzhend. They are migration of Oguzes and Turkmens under the lead of Seljuks to the territory of Dzhend region and the city in the 10th century; Seljuks’ struggle against the ruler of Zhankent Ali and his son Shah-Melik, governor of Dzhend; in 1220 capture of Dzhend by Mongols of Dzhuchi Khan who made it his headquarter. Dzhend is mention in narratives about the struggle of Timur, Emir in Khodjend, against Mongols. By the name of the city people called the region. The Aral Sea was named Dzhend Lake and Kyzyl-Kum Desert — Dzhend Desert.

Archaeological excavation in Zhan-kala settlement, located 115 km west — south-west of the city of Kyzylorda were conducted by the Khorezm Archaeological and Ethnographic Expedition under the scientific leadership of S. P. Tolstov in 1946, 1948 and 1961. As a result, scientists proposed to identify this monument with medieval city of Dzhend. This opinion became general accepted by researchers. 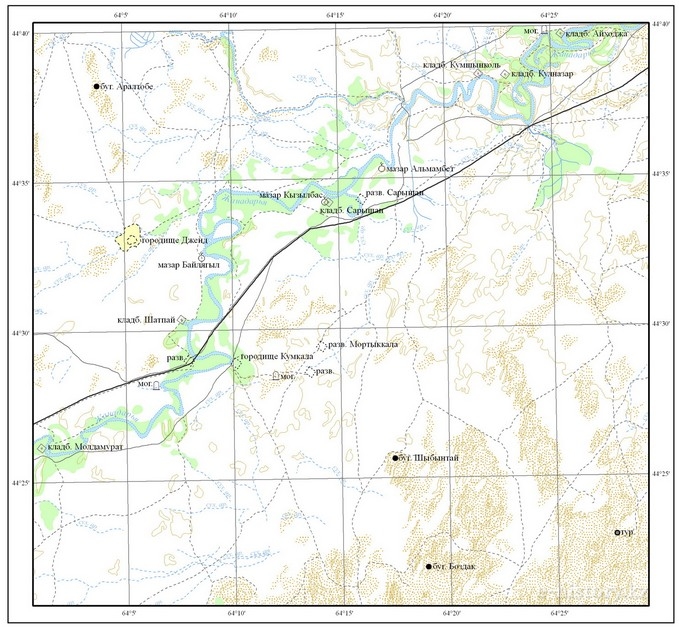 The city became prosperous in the 10th — 12th centuries. It was captured by Mongols and Dzhuchi Khan made it his headquarter. In the post-Mongol period the city continued developing. Jamal al-Karshi considered it as "trifling", but "it had a bustling market and merchants continued coming there being optimistic about profit". According to numismatic material, in the 14th — 16th centuries the city kept on minting coins.

In 2009 researchers of the Archaeological Expertise LLC under the leadership of D. Voyakin with the support of the Kyzylorda Regional Administration conducted comprehensive studies on the site of Dzhankala. 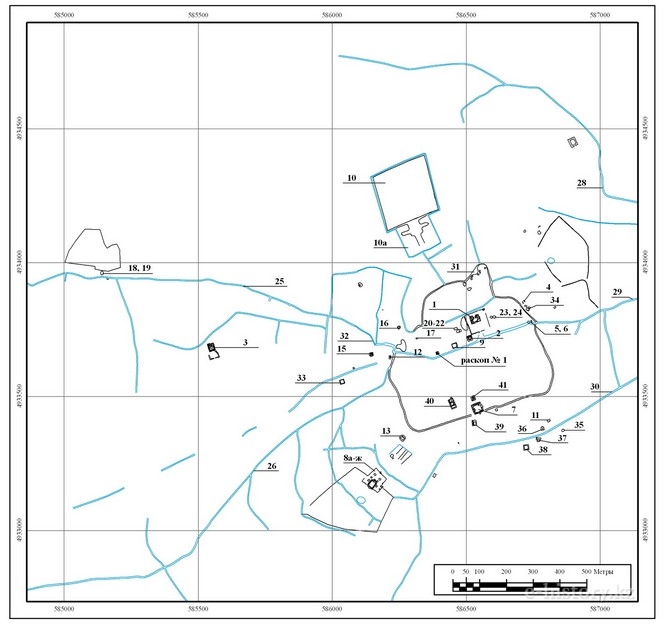 Plan of the city of Dzhan kala designating the architectural buildings

The site is situated 6 km east of the Zhanadarya riverbed. Like most medieval cities it has citadel, shahristan and rabad. The citadel consists of several elements, including palace, surrounding outer wall and corner north-eastern tower. The 1 m wide wall surrounds the palace and shapes interior space of the citadel (75×75 m). An octagonal 8-m tower is situated in the north-eastern outer corner of the citadel. The outer wall is surrounded by a ditch which width varies from 20 m in eastern part where reservoir was excavated, to 4 m. 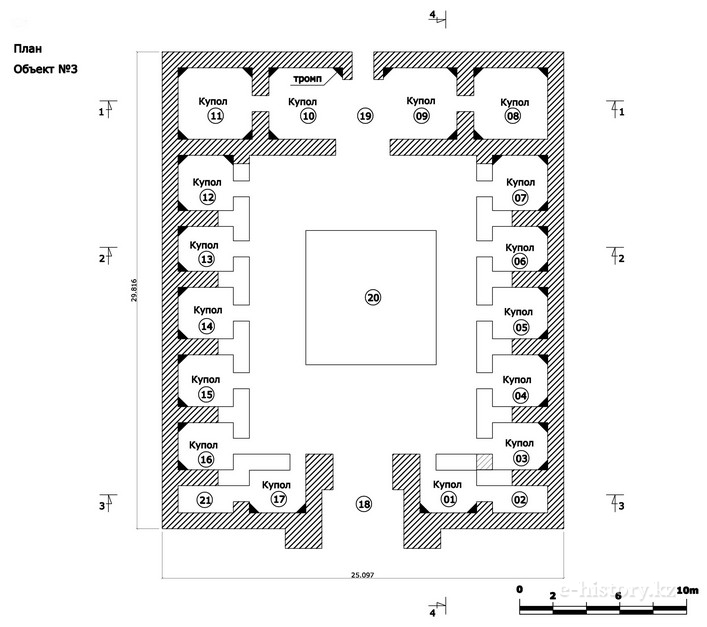 Caravanserai on the territory of rabad 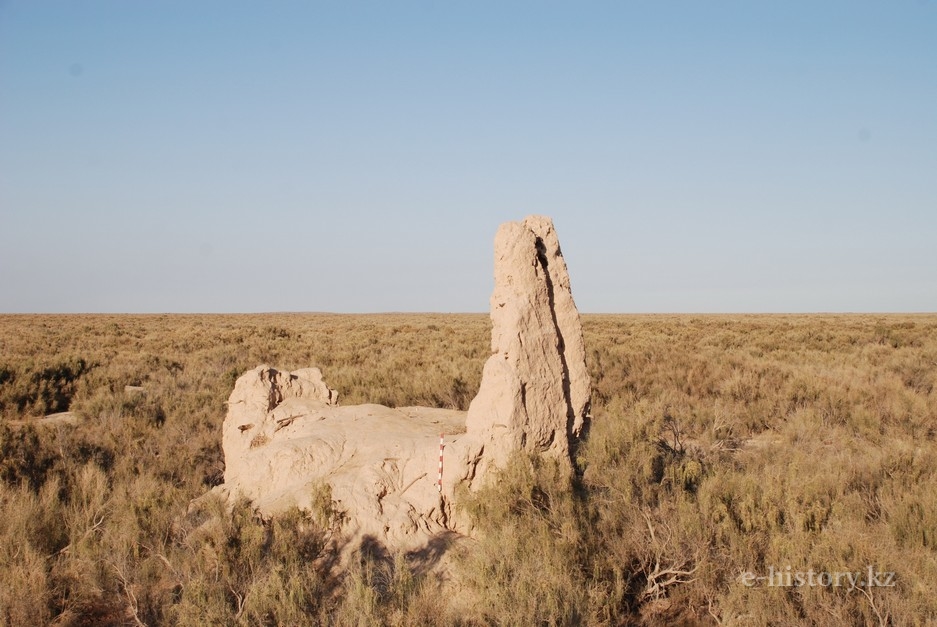 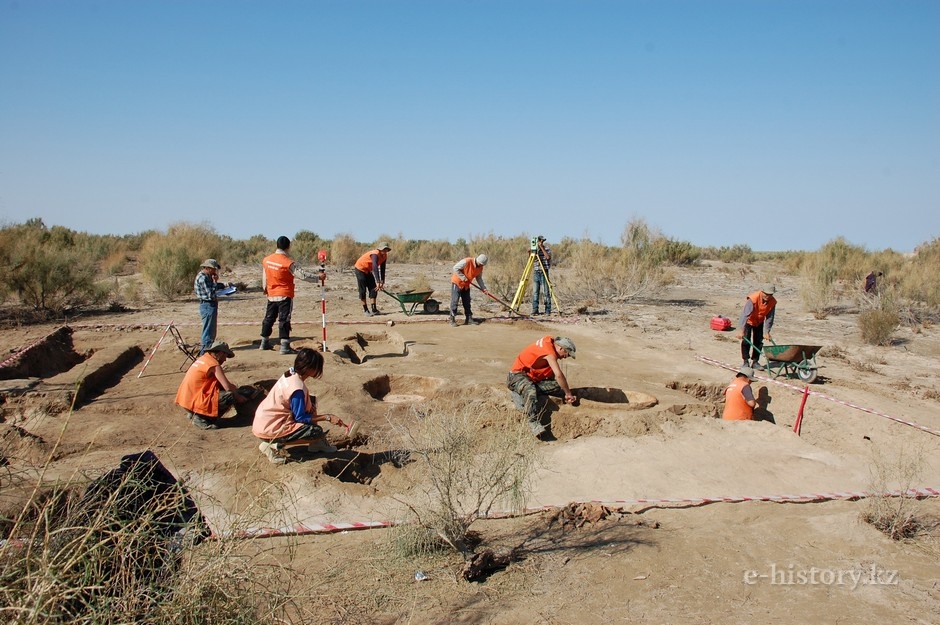 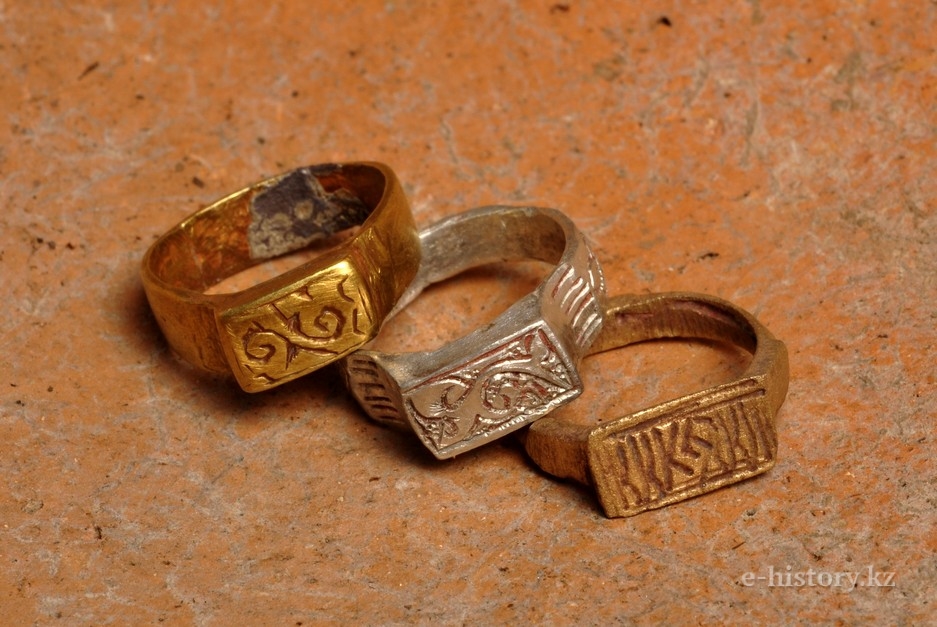 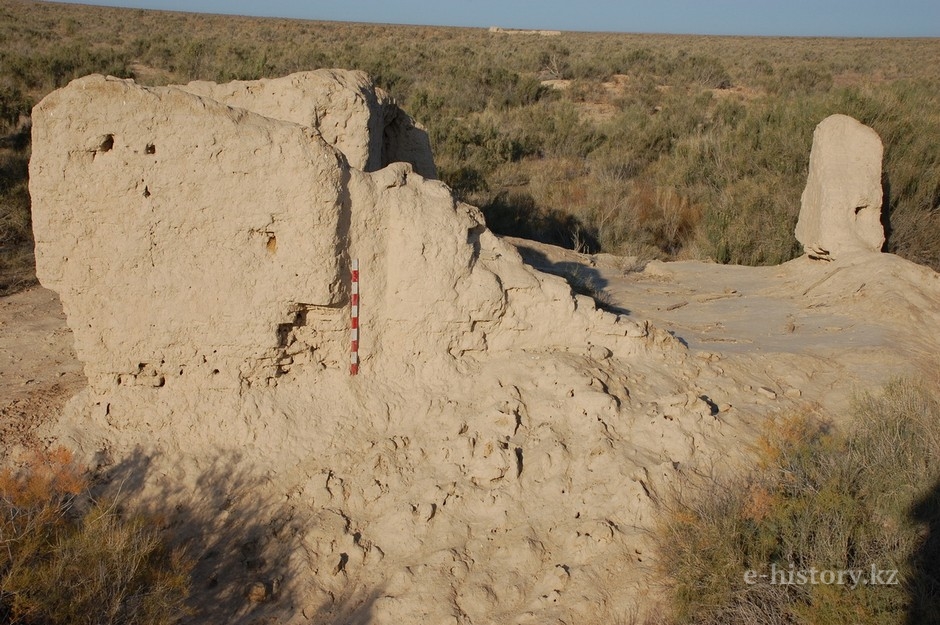 Ruins of one of the farms of Dzhan kala

During excavations archaeologists collected a lot of materials. Mainly, the material includes ceramics, coins, metalware, Iranian chandeliers and Chinese porcelain. Ceramic complex of the city dates from the middle of the 14th — 17th centuries. Numismatic material of Dzhankala consists of 108 copper and 15 silver coins. According to numismatist A. Pachkalov, archaeologists didn’t find any coins minted in Dzhend. It is appeared that in the city people primarily used Khorezm coins of the 14th century. 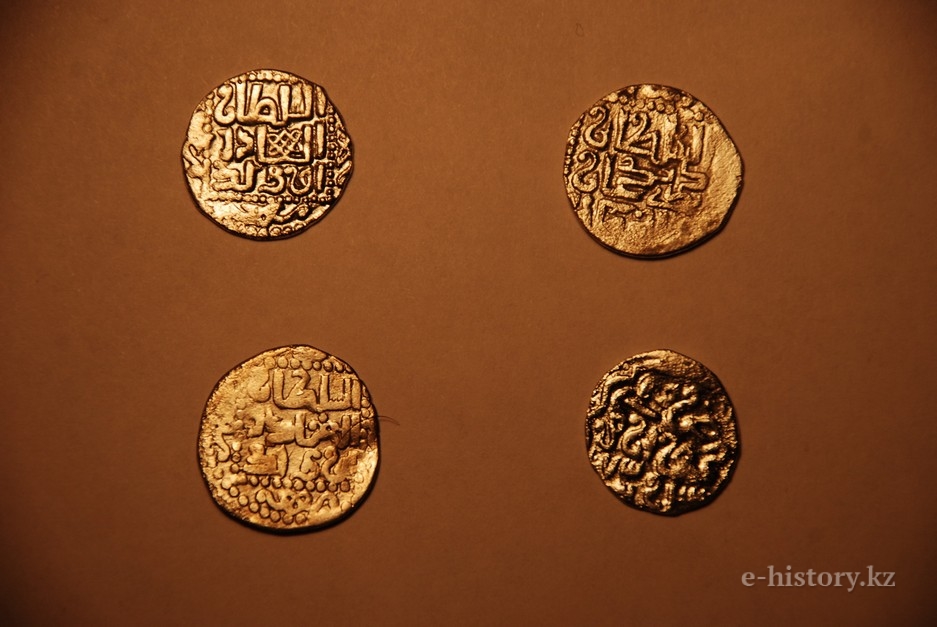 Based on the results of analysis of numismatic material, ceramics and architecture, we can assume that the opinion concerning identification of Dzhankala with the medieval city of Dzhend was wrong.

Thus, new archaeological materials from Dzan kala do not provide an opportunity to localise Dzhend at the site of Dzhankala and, primarily, because of the absence of material which dates from pre-Mongolian period. Archaeologists didn’t find ceramics or coins which could define the date earlier than the 14th century. This means that the search for Dzhend should be continued. We consider that the following situation could occur: like Sauran and Yangikent these cities changed their location after the Mongolian invasion moving from one place to another. For example, Sauran (the site of Karatobe) was rebuilt 5 km to the west and it is identified with the site of Sauran dating back from the 13th — 18th centuries. The same happened with Yangikent (the site of Zhankent) which dates back to the first — the early 13th centuries. Modern Yangikent is being constructed near it (2 km to the north-west) and it is identified with the site of Myntobe.