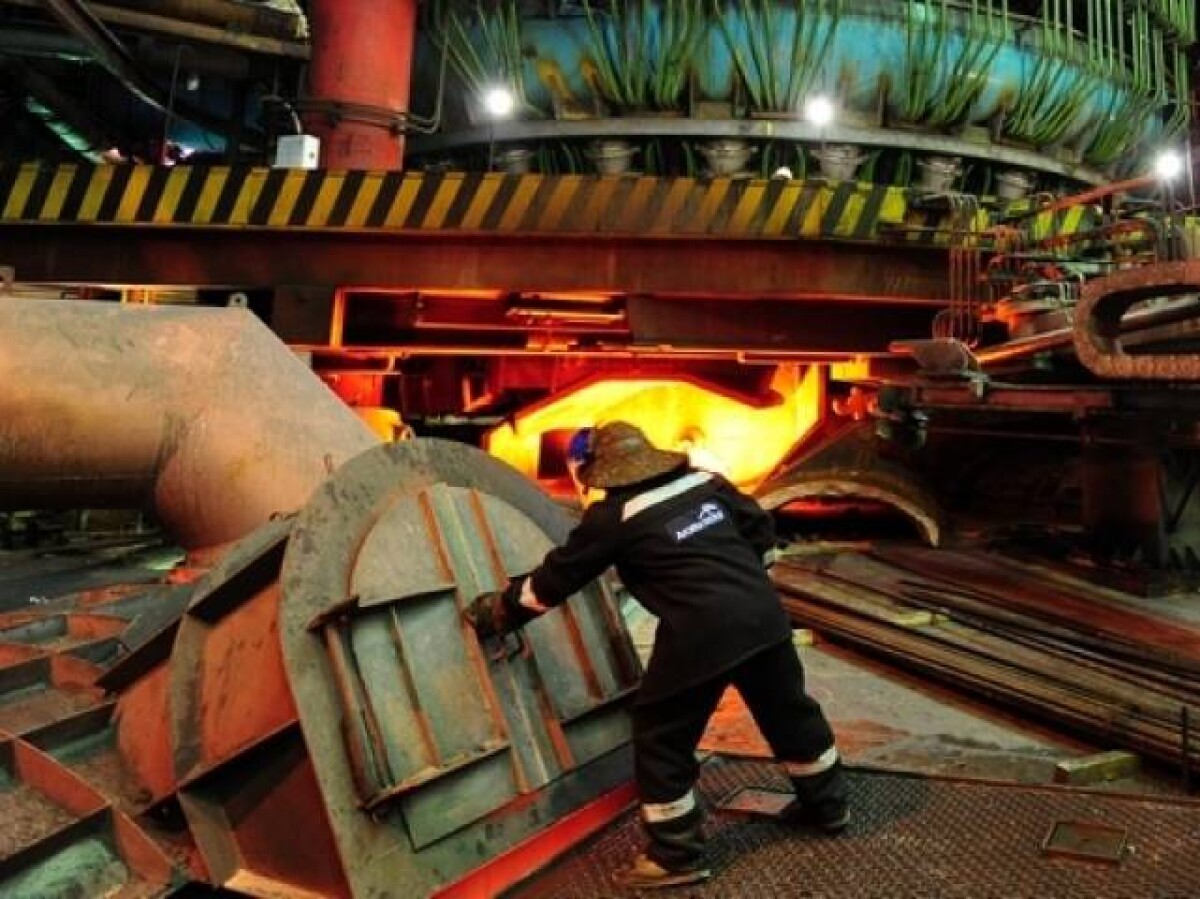 70 years passed from the date of production of the first Kazakhstan steel and 55 years since the first smelting of Kazakhstan cast iron.

The idea of construction of the enterprise with a full metallurgical stroke was proposed in 30’s by scientists K. Satpayev, M. Rusakov and A.Speransky. Then fields of iron ores of the Central Kazakhstan were studied in details. The Great Patriotic War which began soon demanded a prompt embodiment of this idea in reality. In 1942, the State Committee of Defense made the decision on construction of small alteration near Karaganda.

In 18 months of work the plant was built in the Kazakh steppe. It was built practically manually with crowbars, sledge hammers and shovels. For this purpose, 3000 people, who lived in barracks, 80–100 people per each, were mobilized. People put a lot of efforts. They worked without days off for 10–11 hours per day. It was such time and the front waited for the Kazakhstan metal.

Thus, how ferrous metallurgy was created in Kazakhstan. In process of construction the first objects of plant — mechanical, forge and boiler, foundry, electro-repair and workshops of processing of thermal energy into mechanical energy also started entering into the system. At the same time more than one thousand people were trained on large metallurgical enterprises of Nizhnii Tagil, Beloreck, Alapayevsk and Magnitogorsk, also well-known as "Magnitka".

On December 30, 1944m the loading of the martin furnace began. During nine hours workers loaded 30 tons of metal furnace charge manually! And on December 31, 1944 the first martin furnace of the Kazakh steel plant gave the first steel! The plant yet was unknown. There was no city of Temirtau, but the Kazakhstan steel already went for production of the weapon and military equipment, helping approach the Victory. I. Stalin congratulated on production of the first steel on the Kazakhstan earth: "I congratulate builders and assemblers of "Kazmetallurgstroy' and employees of the Kazakh steel plant with the end of construction and commissioning of the martin furnace No. 1".

In a year thanks to high quality of steel and shock building the settlement of Samarkand on River Nur received the status of the city called Temirtau. In post-war years the idea of creation of steel works with a full stroke did not lose the relevance. In October, 1948 the site of construction of the Karaganda steel works with a full metallurgical stroke was approved. The group of researchers headed by the scientist K.Satpayev took part in its choice. Extension of already existing Kazakh steel works was impossible because of the close layout of plant to the Samarkand water reservoir, city boundaries, and also because of the high level of ground waters. Moreover, the equipment of the Kazakh steel plant became fully outdated by this time. 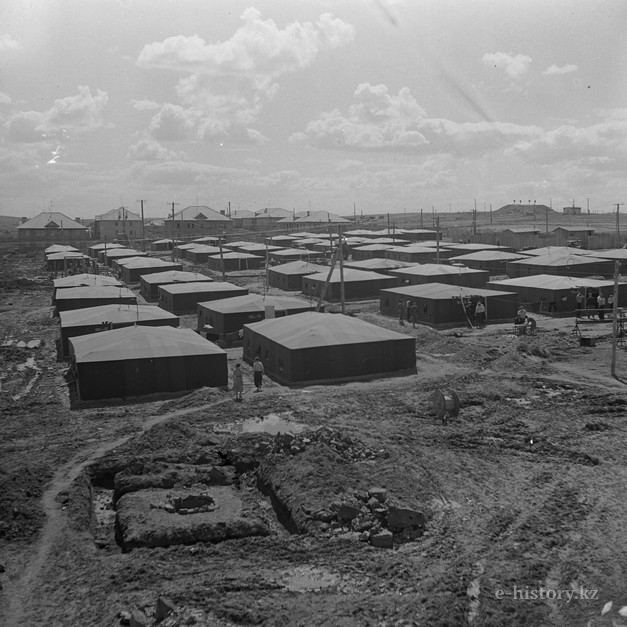 Beginning of construction of iron and steel plant. Tent town

Development and change of the construction plan took many years. In 1956, construction of plant was declared as All-Union. Youth from all over the country started arriving to Temirtau. Current President of Kazakhstan Nursultan Nazarbayev was a part of the first working echelon. On December 3, 1957, the solemn laying of the base of the first blast furnace of future giant of ferrous metallurgy — the Kazakhstan Magnitogorsk, took place.

If in 1957, 9 thousand builders worked at plant, then in 1958 their number increased to 17 688 people, more than 70% of them were youth around 20–22 years. For training of young builders the Karaganda Mining Institute was reorganized in polytechnic and in Temirtau the evening faculty of this institute was open. So, step by step multinational 18-thousand staff was created on the Kazakhstan Magnitogorsk. 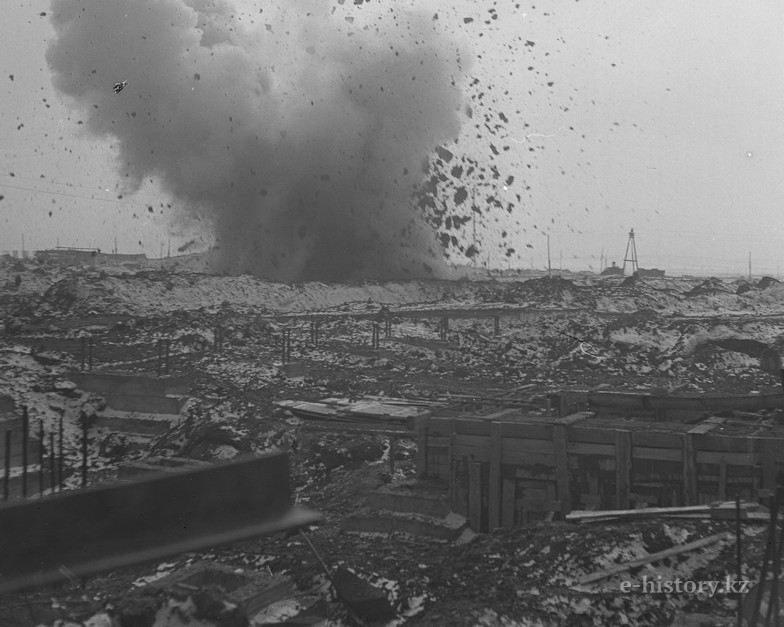 The first explosion on the base of a blast furnace, 1958

On July 3, 1960, the blast furnace No. 1 of the Karaganda iron and steel plant produced the first Kazakhstan cast iron. This day became birthday of the Kazakhstan Magnitogorsk. Such name was given by the first builders and under such name it forever entered into destinies of people which built it and worked there. On July 3, 1960 the smelting process was directed by Vadim Romanov and senior furnanceman Akhat Nabigulin. Together with the masters the young metallurgist — Nursultan Nazarbayev — future President of the Republic of Kazakhstan took part in historical process of smelting. 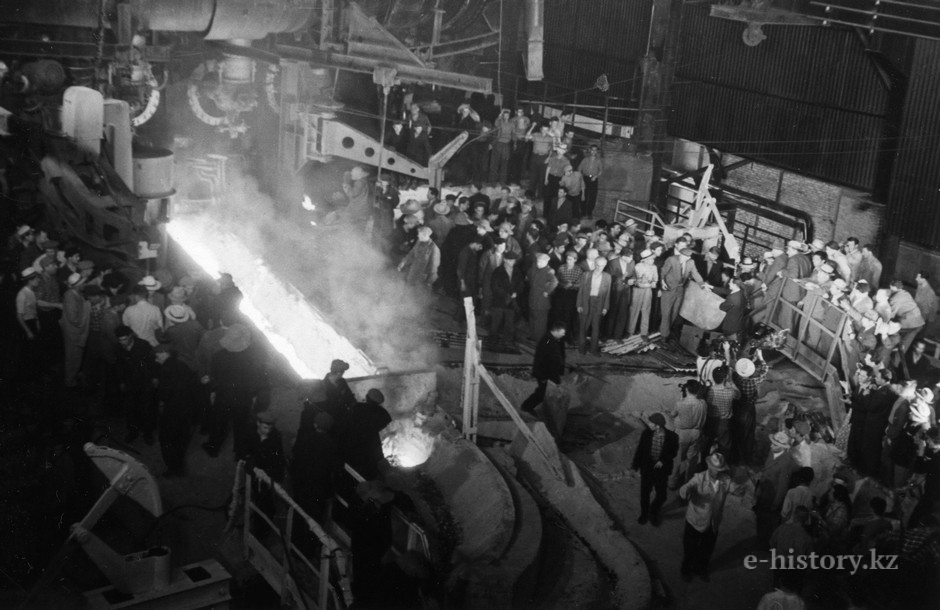 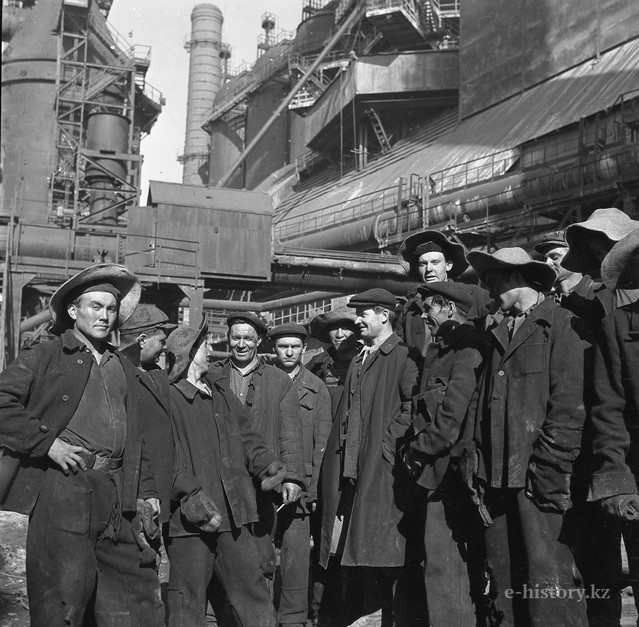 Participants of melting of the first cast iron, on July 3, 1960

The Kazakhstan Magnitogorsk tempered characters of all who passed through it, taught to cope with difficulties, keep friendship and aim at the best in life. Many of that echelon of the first metallurgists became successful people. President Nursultan Nazarbayev, Professor Kabidulla Sarikenov, first Minister of Foreign Affairs Toleutay Suleymenov and many others. "The profession of the metallurgist formed in us special character, discipline, courage and punctuality. If God gave a chance to begin life again and rewrite some pages of the life, we would never exchange any day of the rough and very interesting youth. All difficulties that we went through were beneficial to us. Even friendship which we keep and protect for years, became hard as metal. No wonder that the president of our country — the former metallurgist. There were no other ways. President’s character is decisive, purposeful and firm as steel", — say veterans of Magnitogorsk.

The new page in the history began with decay of the Soviet Union both for Kazakhstan and for all its production giants. In 1995, when the largest iron and steel plant of the republic was on the verge of a stop, the LNM group acquired its assets, nowadays it is "Arselormittal" corporation. The new owner of combine had to put a lot of efforts to stabilize and recover work of the enterprise, to upgrade production capacities, to adjust payment of salary workers and to return sales market.

The company includes some projects, according one of them, for example some ecological objects like a water treatment complex, system of dust cleaning on production, 1st and 2nd steps of gas purification of the first converter, system of dust cleaning behind the rotating furnace No. 3 in workshop of burning limestone. All of them are included into the program of nature protection actions. As a result of implementation of this project reduction of dust emission in the atmosphere was 20 thousand tons per year.

The modern Magnitogorsk — the business card of the country, it is the production basis of the best metal recognized around the world. And today the combine in Temirtau remains the largest mining and metallurgical enterprise in Kazakhstan and one their best enterprises of the Arselormittal company takes first place in a pattern on production of steel.