Home News Other Mystery of the “solar-headed” images from Tamgaly 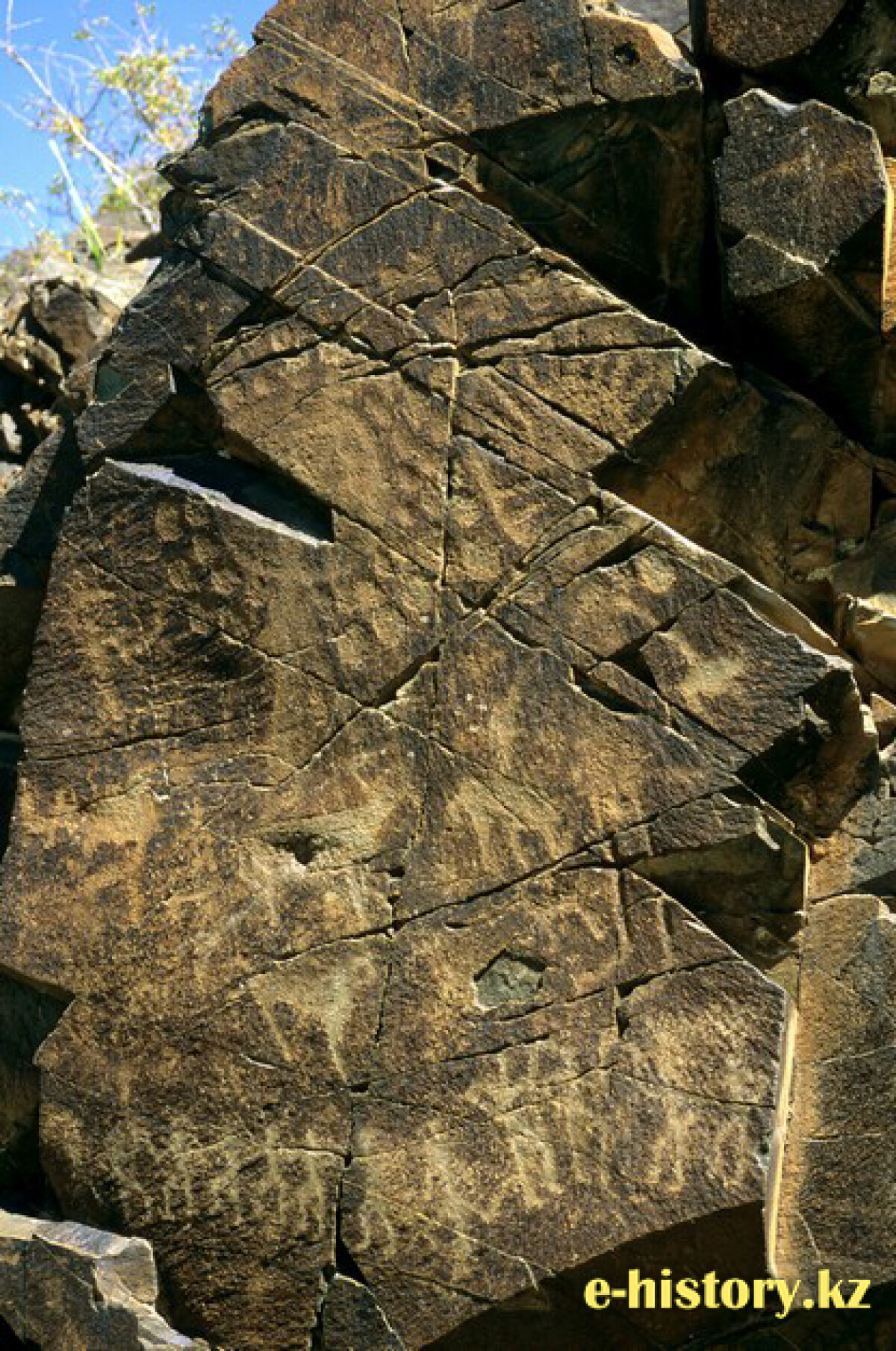 Andrzej Rozwadowski, Ph. D., director of the Department of Central Asia and Siberia, Institute of Eastern Studies, Adam Mickiewicz University in Poznań, Poland, has told our web-site about his scientific interest in the rock art. 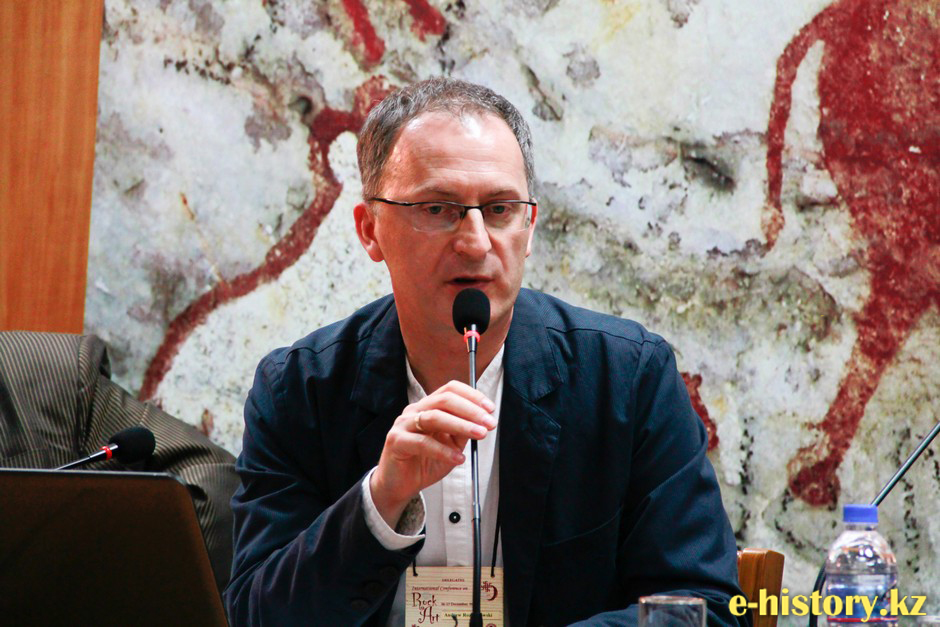 — Dear Professor, could you tell us when did you start working on Central Asian rock art?

— It was quite early and unexpectedly. I was a student of the second year of archaeology at my University in Poznań. As a group of students we organized an expedition to Uzbekistan to find out more about rock art in this country.

Central Asia was completely unknown to us and it was hard to find any European archaeologist competent in rock art in this part of the world. I was astonished when I came to Uzbekistan and discovered how rich in rock art Central Asia is.

My first object of study was the Sarmishsay Valley in central Uzbekistan. Till graduating I traveled to Uzbekistan three times. Basing on this research I completed my Master Thesis. It was about twenty years ago. And it was only beginning of my adventure with rock art in Central Asia.

— How did you become interested in working in Kazakhstan?

— On one hand it was a consequence of my growing interest into the rock art of the region, on the other it was a result of the question which I started to investigate in my Ph. D. research project. I was very interested in the question if the rock art dated to the Bronze Age was really associated with ancient Indo-European peoples, as many researches in Central Asia assumed. I wanted to look at this problem from a different perspective, to set the problem in a new theoretical framework.

I followed the assumptions of semiotics thinking about rock art as a text of culture. In this perspective more important is to analyze a set of images in one site and to try to identify a "grammar" of rock art in this place and then to verify if such a rock art grammar has any correspondence with a grammar of another text of the Indo-European culture. For this comparative analysis I focused on the Indo-European mythology, or more precisely — the Indo-Iranian. I decided to analyze three sites, which I expected could be a kind of test for my project.

To verify my conclusions resulting from my work in Sramishsay in Uzbekistan I went to Kazakhstan to do research at other rock art sites from the same perspective. I chose the Tamgaly Valley and Arpauzen in the Karatau Mountains, both in south-east Kazakhstan. All the sites then were not far from each other. Thanks to Prof. Zaynulo Samashev I was able to verify my assumption working in both of these sites. 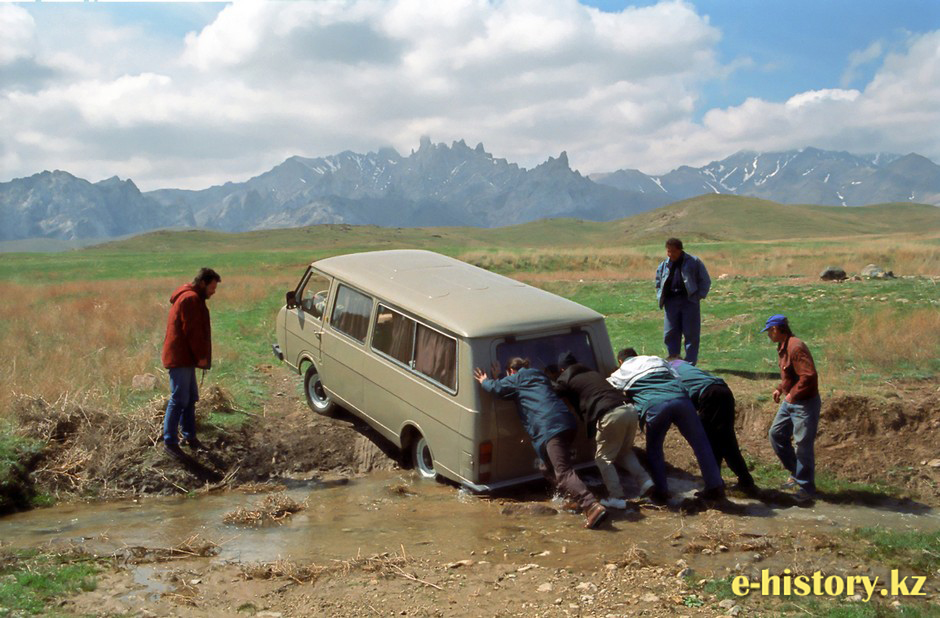 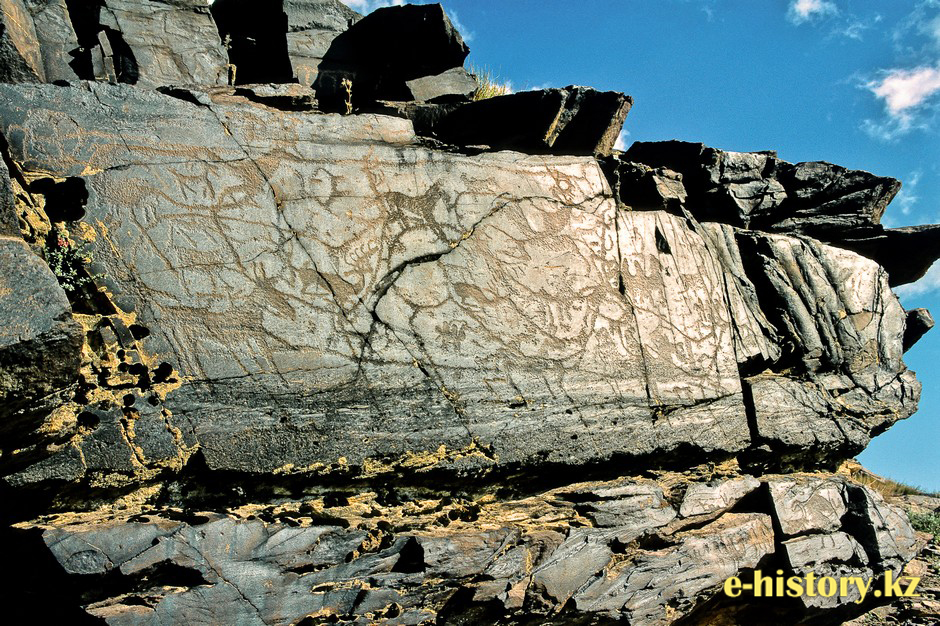 Most fruitful appeared the research in Tamgaly where interesting structural correspondences with Uzbekistan rock art were observed. It was great experience. I realized that discovery concerns not only finding new images but equally, or even more fascinating can be discovering something new in the material which has long been known. 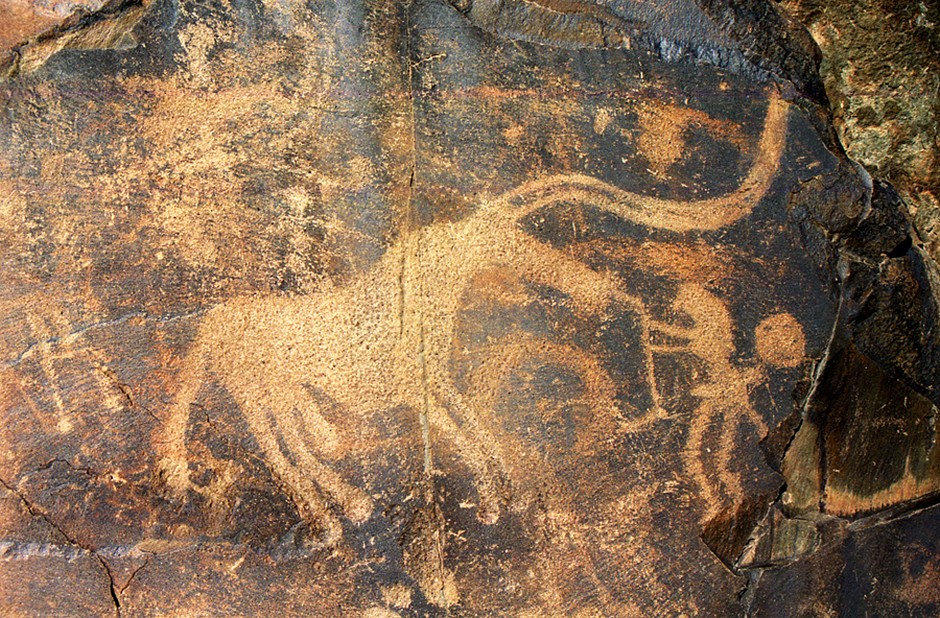 I learned a lot. The Kazakhstan’s petroglyphs itself appeared extremely fascinating. I often recall my expeditions to Kazakhstan as unforgettable experience. And besides the rock art I had a privilege to meet excellent people who help me a lot. We made friendship, Prof. Zaynulo Samashev also visited my University in Poland.

— What was the role of the rock art in prehistoric societies in Kazakhstan? Was it art?

— These are really big questions. The role of rock art is a hotly debated problem in archaeology and anthropology. Sometimes it is even easier to say more about the meaning of rock images then their function. Certainly rock art was a way of landscape marking, making such places important points for past societies, maybe goals of pilgrimages. Possibly they were places of power (as in other parts of the world) where people journeyed from distant regions.

Many people automatically reject the identification of prehistoric rock images with art. We need to understand, however, that art does not refer only to something beautiful. Esthetics has been changing through time and space. And though we cannot exclude that the ancient images were perceived in this manner, more probably they functioned as a kind of message and their value was in their informative potency. When we realize that one of the main function of art, also in modern art (!), is to convey a given message (rather to provide a nice esthetic experience), then the question "if rock art was art" appears in different light. I think it was art — art of expressing emotions, thoughts, individual and common ideas.

— Could you compare rock art in Kazakhstan and other countries?

— Rock art in Kazakhstan is a very important heritage. It is a testimony of local culture and history. So it is indispensible to protect it and investigate. This is what happens now in many other countries all over the world. 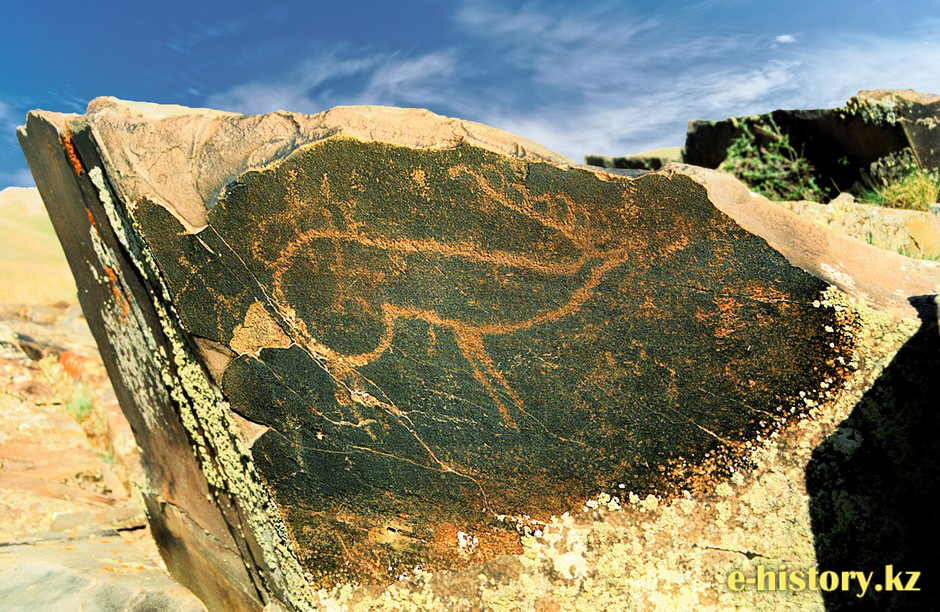 We often think about rock art as a universal human heritage, and it is of course correct. But we also need to emphasize the role of prehistoric art as a testimony of local culture, which can be a source of identity for local people. For example, rock art often starts to be inspiration for modern artists — we can see this in Kazakhstan as well as other parts of the world (in Africa, Australia or America). I was also very impressed seeing Kazakhstan sportsmen at the Winter Olympic Games in Sochi in 2014 dressed in beautiful costumes decorated with local rock art motifs!

But rock art of course is important source of knowledge for investigating ancient culture, connections between ancient peoples, and even some human universals. For example, when we consider the tradition of Central Asian/Siberian shamanism it appears that rock art provides us important information for understanding the antiquity of shamanism in this part of the world as well as its spread and dynamics. In Altai we observe clear shamanic rock art of historic times. When we move to prehistory the problem starts to be more complicated. We do not find images of shamans with drums which are so characteristic for ethnographic picture of Siberian shamanism. We find however similar images both in Kazakhstan and Altai, which comes from the Bronze Age, and which reveal important correspondences with core shamanistic symbolism related to human-animal transformation. It is then reasonable to conclude that shamanism in older times played important role not only in Siberia, but also in Central Asia, including Kazakhstan. 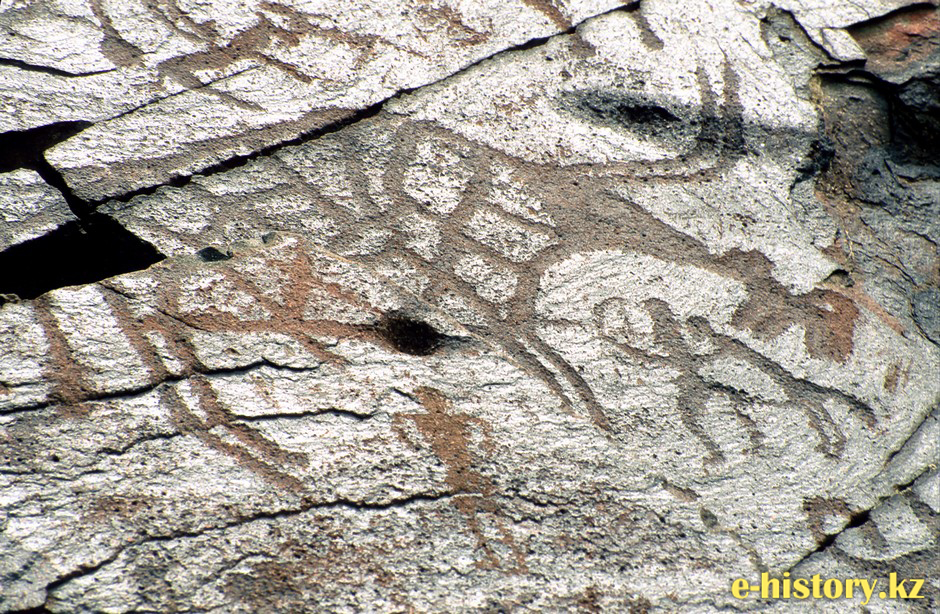 — What is your interpretation of the "solar-headed" figures in the Tamgaly Valley?

— You ask me one of the most fascinating questions connected with rock art in Kazakhstan. These images were labeled as "solar-headed", but if their heads are really solar? What sometimes seems to be obvious for our eyes, can appear a kind of illusion. When you look carefully at these images you can notice that it is difficult to show their clear resemblance to sun. Each of them is different. So, when I started to analyze them from the perspective of their relationships with other petroglyphs, instead of focusing only on their heads, it appeared that such configurations point to shamanistic symbolism. Moreover, their "solar-heads" resemble patterns which are universally perceived by persons while in trance. So, the "solar-headed" images from Tamgaly are a big and fascinating topic for discussion.

Furthermore, images with strange circular heads can be also found in other parts of Central Asia, like in Sarmishsay in Uzbekistan, or Saymaly-Tash in Kyrgyzstan. When last year I worked in Saymaly-Tash I was able to observe that in this remote place there are also other petroglyphs which are characteristic for Kazakhstan, like so-called "spectacle-shaped images" (two circles or discs connected by line). It shows that rock art in Kazakhstan evidently should be investigated in wider Central Asian perspective. 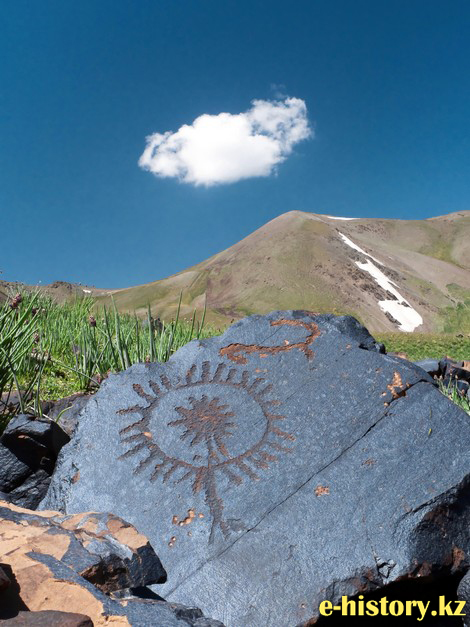 — What are your scientific plans for the future? Are you going to come to Kazakhstan again?

— At this moment I am working on the book about Central Asian rock art and shamanism where I discuss materials both from Siberia and Central Asia. So I am a bit busy with this time-consuming work. I supervise also a project in Tanzania so it is possible that I will focus my attention a bit more on African rock art in nearby future. However, rock art in Kazakhstan is so fascinating that I would like to return here to continue research. The future will verity everything.

All photographs are copyrighted by Andrzej Rozwadowski and may not be copied or used in any way without permission of the author.