Home News Other The old-timer building. Hyzyr’s minaret in Sayram 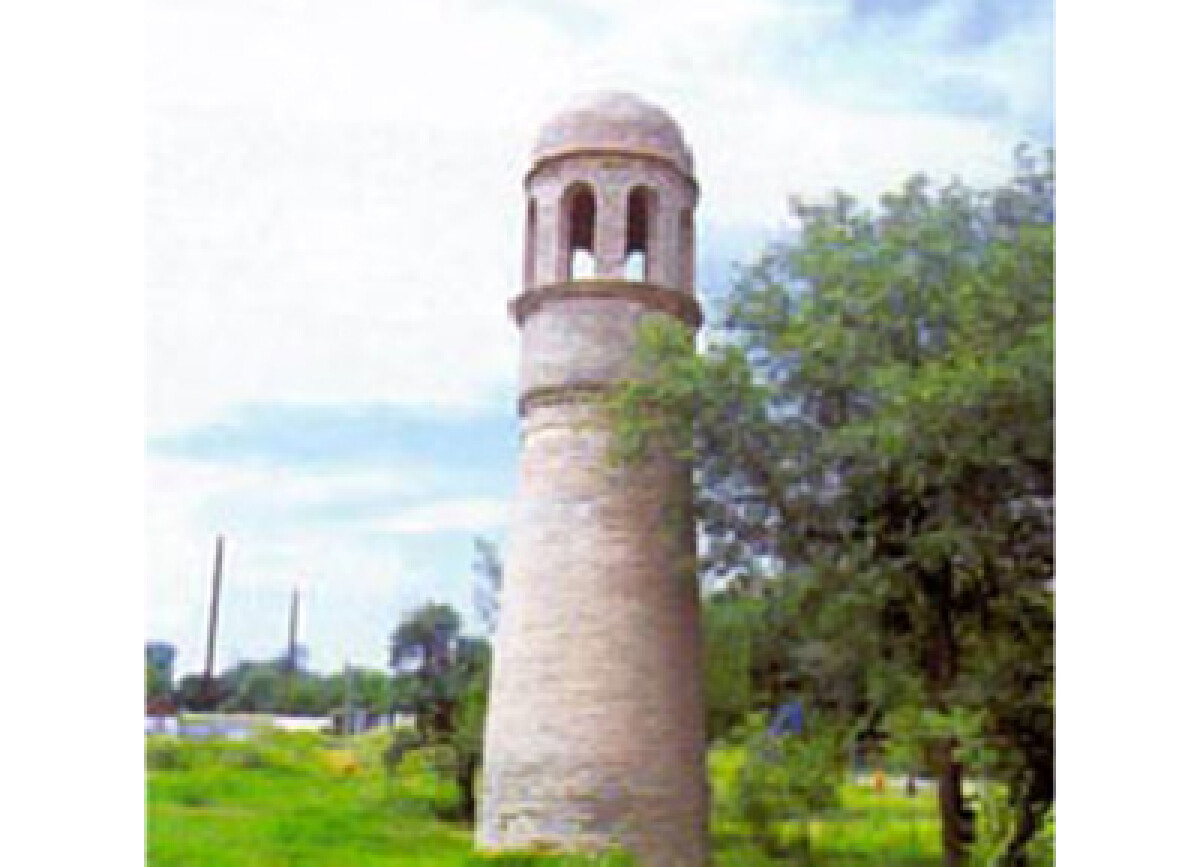 The single remained minaret in ancient Sayram bears a name of the Prophet Hyzyr Paygambar who was mentioned in the Quran as the unnamed companion of Musa (Moses).

Hyzyr’s minaret located in one of the most ancient cities of the Southern Kazakhstan Sayram, in 10 kilometers from Shymkent and it is dated 9th -12th centuries. A city of Ispidzhab, center of the district of the same name which was a part of Transoxiana, was on a place of Sayram during an era of the early Middle Age.

The monument of ancient architecture the minaret of Hyzyr was made of burned bricks. After completion of construction its height was 10, 5 meters. However, it was destroyed by negative natural environment. 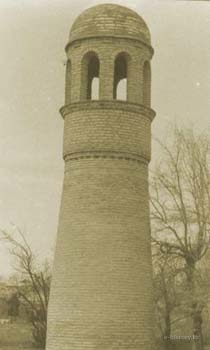 The mosque of Hyzyr Paygambar was one of the holiest sites of Sayram and compact historical and cultural complex. Only underground room and half-ruined minaret remained by 1920. Despite the fact that Hyzyr’s mosque was badly damaged, it was found that it consisted of a large rectangular courtyard with an entrance on the east side. Now it is one of the central parts of the city which is religious center and a place of pilgrimage. The city is habitable, therefore from the East to the territory of the minaret is adjoined by a housing estate, and from the North and the West — school. The city is habitable, so the territory of the minaret from the East is adjoined by houses, and from north and west by school.

5 meters of the ancient minaret, diameter of which at the base is 2, 5 meters remained up to now. The upper part of a tower is laid out by patterned bricklaying and has apertures in walls. The ladder carrying on the top of a minaret is strengthened by wooden props and bricks. 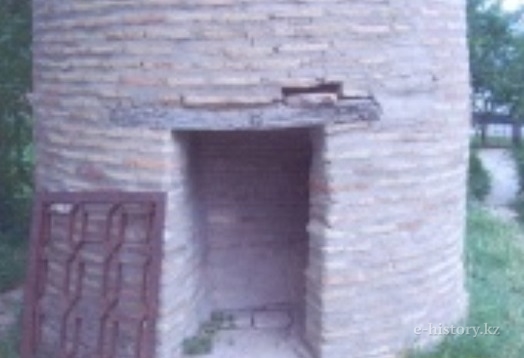 Entrance to the minaret

Saint Hyzyr was one of the respected and honored people who spread Islam. In 1866, A. Gaines was in the underground room of the mosque. In his diary he wrote: "Here, Hyzyr remained for 60 years worshiping Allah, and then lived long after and taken to the sky". All Turkic people have beliefs connected to Hyzyr’s cult.

Some people consider him as the patron of sea travelers, and sacred who protected against fire, theft and snakebites. Turks have a holiday called Hydyrellez, which is celebrated at the beginning of May, in a day of meeting prophet Ilyas and Hyzyr.

According to belief Hyzyr and Ilyas were brothers who agreed to return spring on the earth. They meet only once in a year — on the sixth of May by Gregorian calendar. The name of this holiday was taken from the connection of their names — Hydyrellez. They meet on the seashore. The prophet Muhammad commended Hyzyr to protect Muslims on earth, and Ilyas — at the sea. Sometimes Hyzyr in the Turkish folklore serves as a defender of Muslims both on earth and at the sea. He is also seen as a symbol of spring and renewal.

Based on mythology of the Turkic people, he was the prophet, who drank life water and received immortality until the doomsday. Hyzyr in a guise of the traveler or beggar can be seen on the way. He comes to rescued people in need, makes miracles and punishes people who make bad deeds. Thus, his name is often mentioned in parting words for those who is planning to travel: "Let Kydyr and Ilyas to be your companions"). 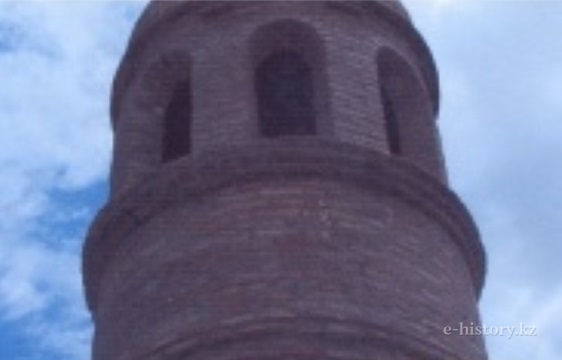 Upper part of the tower

Names like Kydyr, Kyzyr and Ilays also were found in the texts of epics. Although they are different persons, their names often identified and translated into a single image. Kazakhs have a belief that if you meet an old man on the way you should not offend him, as he can be Hyzyr, who appeared as a traveler or beggar. If such person comes to your house and asks to eat, then it is necessary to feed him and give him a shelter. So according to this belief the house will always be full of abundance. But if you offend this person, you will surely be punished.

The name Kyzyr most often found in heroic eposes, where batyrs (heroes) turn to him for support. And he comes to rescue in the most difficult moments. Kazakhs believe that Kyzyr grants good luck and happiness, and has appearance of the kind warm-hearted old man. There is a belief that among people who meet daily on their way, they might see Kyzyr. To get the blessing of Kyzyr, it is necessary to show hospitality to any person, despite his social status, wealth, appearance and clothes. There is a saying: "Kydyr" will be one of forty". 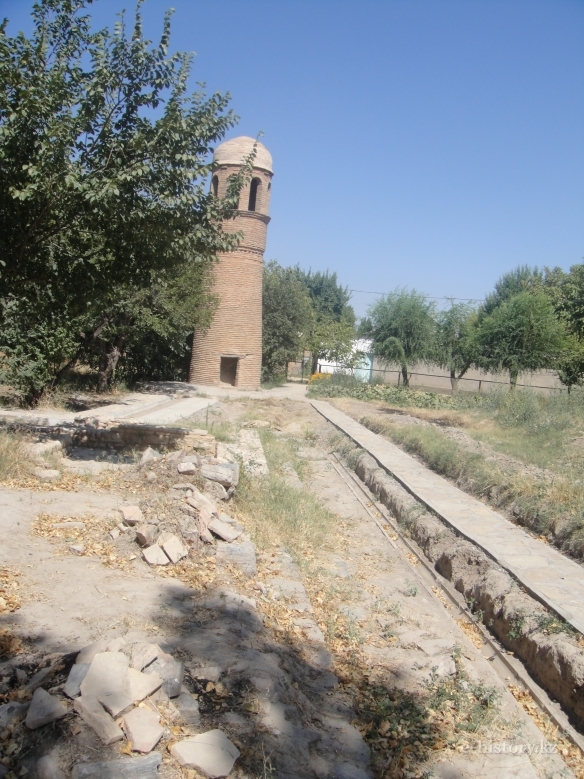 This how looks Hyzyr’s minaret today

Today, often near the minaret it is possible to meet the lonely traveler or group of the traveling pilgrims. They come to this holy site to homage to Hyzyr and ask blessing and happiness.