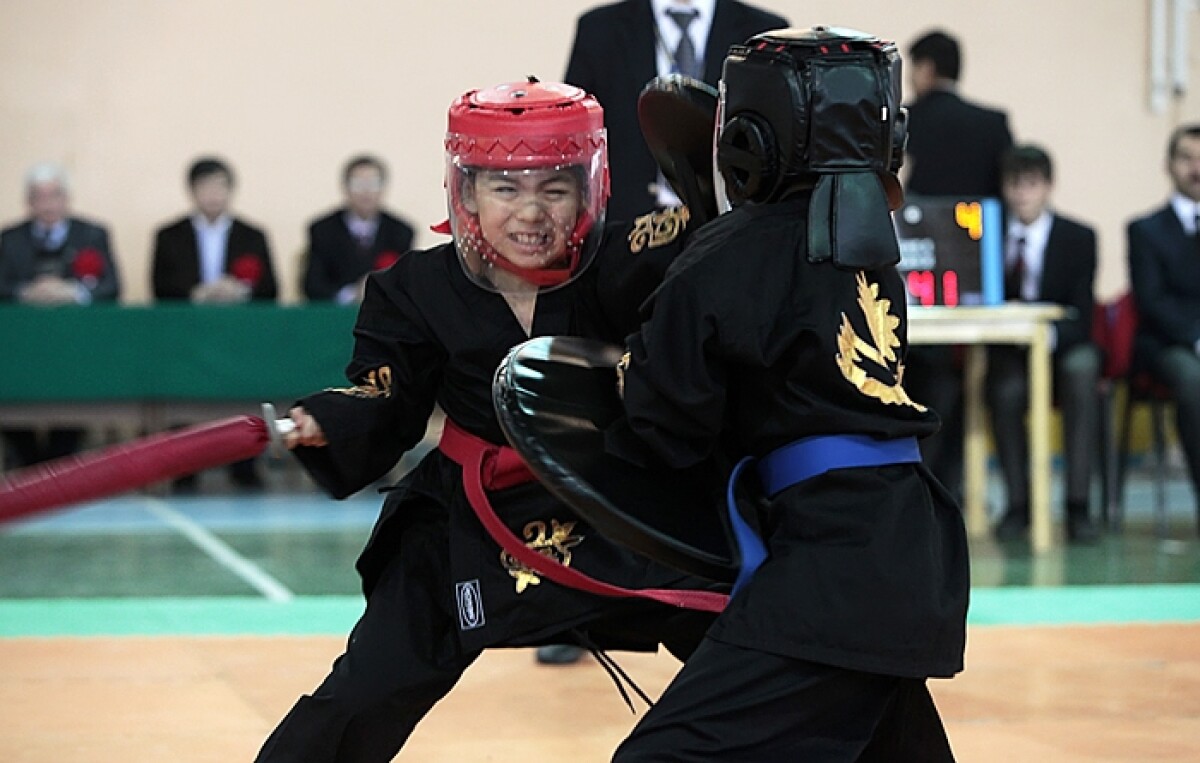 After hundreds of years this forgotten type of martial art returned to Kazakhstan.

In the Kazakh steppes, future soldiers from the early childhood were trained in master of the weapon. Young men had to master their skills with five types of weapon, or "bes karu". Young batyrs (heroes) mastered archery, javelin throw and a hatchet, fencing on swords (kylyshtasu) and hitting by cudgel (balta). Only those dzhigits (young men) who mastered skill with all five types of weapon were ready to the battle with enemies.

Kylyshtasu — ancient Kazakh martial art. Over the time it disappeared from national memory and traditions. However, today kylyshtasu was actively revived by people who indifferent to history of the people, and those who value rich national traditions. Since 90s the group of professional karatekas headed by the vice-president of Federation of Karate-Do of Kazakhstan Zhastalap Sanauov, kalyshatsu or traditional Kazakh art of possession of a sword returned back to Kazakhstan.

— Zhastalap, tell us, please what is the kylyshtasy as one of the type of Kazakh martial art.

— Kylyshtasu is variety of martial art of Kazakhs. It is fencing in swords in Kazakh language called (kylyshakh). In ancient times they were steel swords, today non-traumatic ones are used. 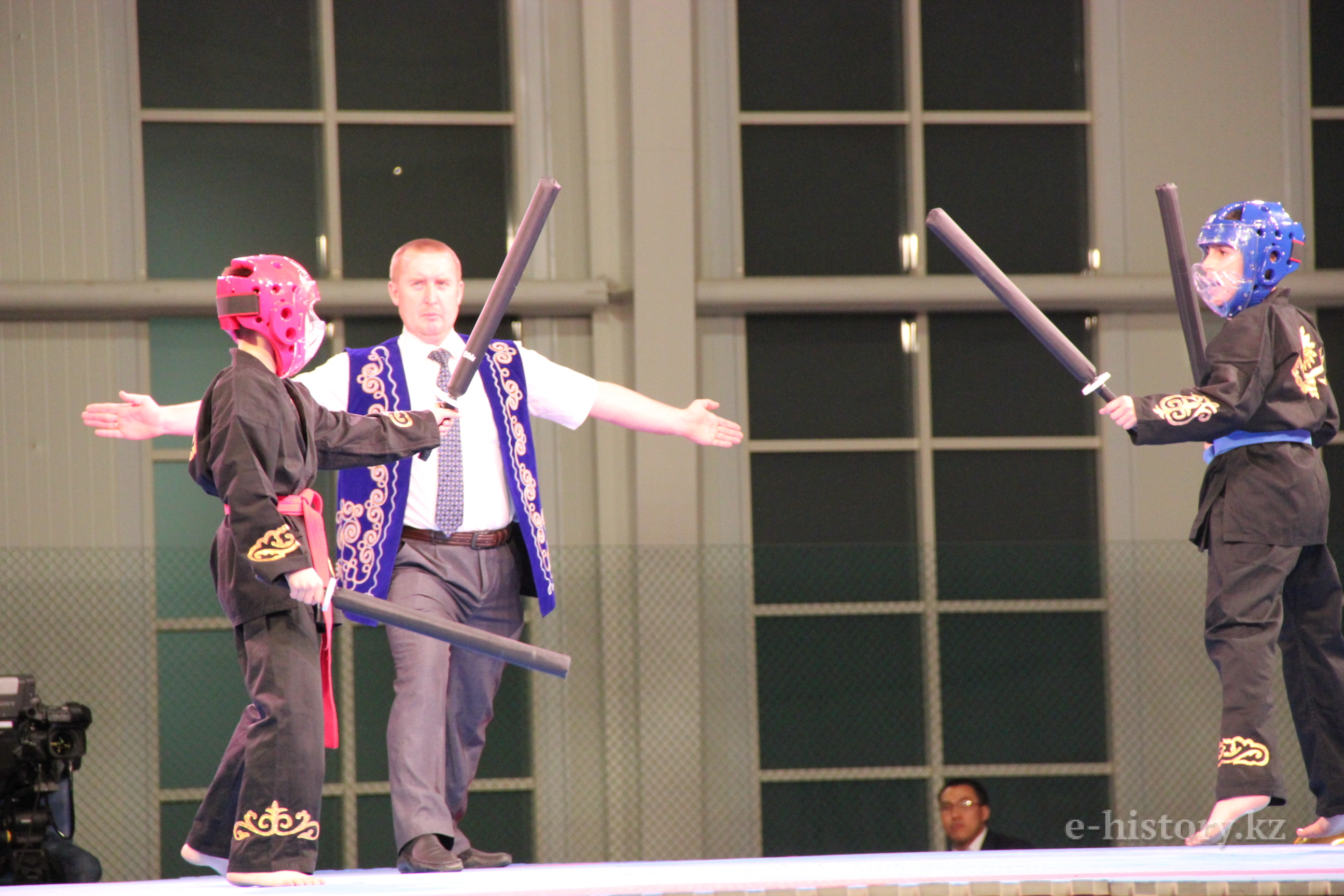 The martial art of Kazakhs is called "bes karu" — skills of five types of weapon. They include archery, javelin throw, kylysh (sword), "balta" (variety of a cudgel) and hatchets. The warrior should know how to use all these weapons. Kylyshs’ of Turkic people were very massive, heavy and long, they required a certain technical preparation. With an appearance of «bulat» steel the sword began to decrease in sizes.

We were engaged in application-oriented karate — kabudo, where chainsticks and tonfa. All of them once were agricultural tools of inhabitants of Akinaviya which were not allowed to use the weapon after occupation of the island by Japanese.

Among children chainsticks are not so popular. Thus, instead of them we decided to introduce our national element. 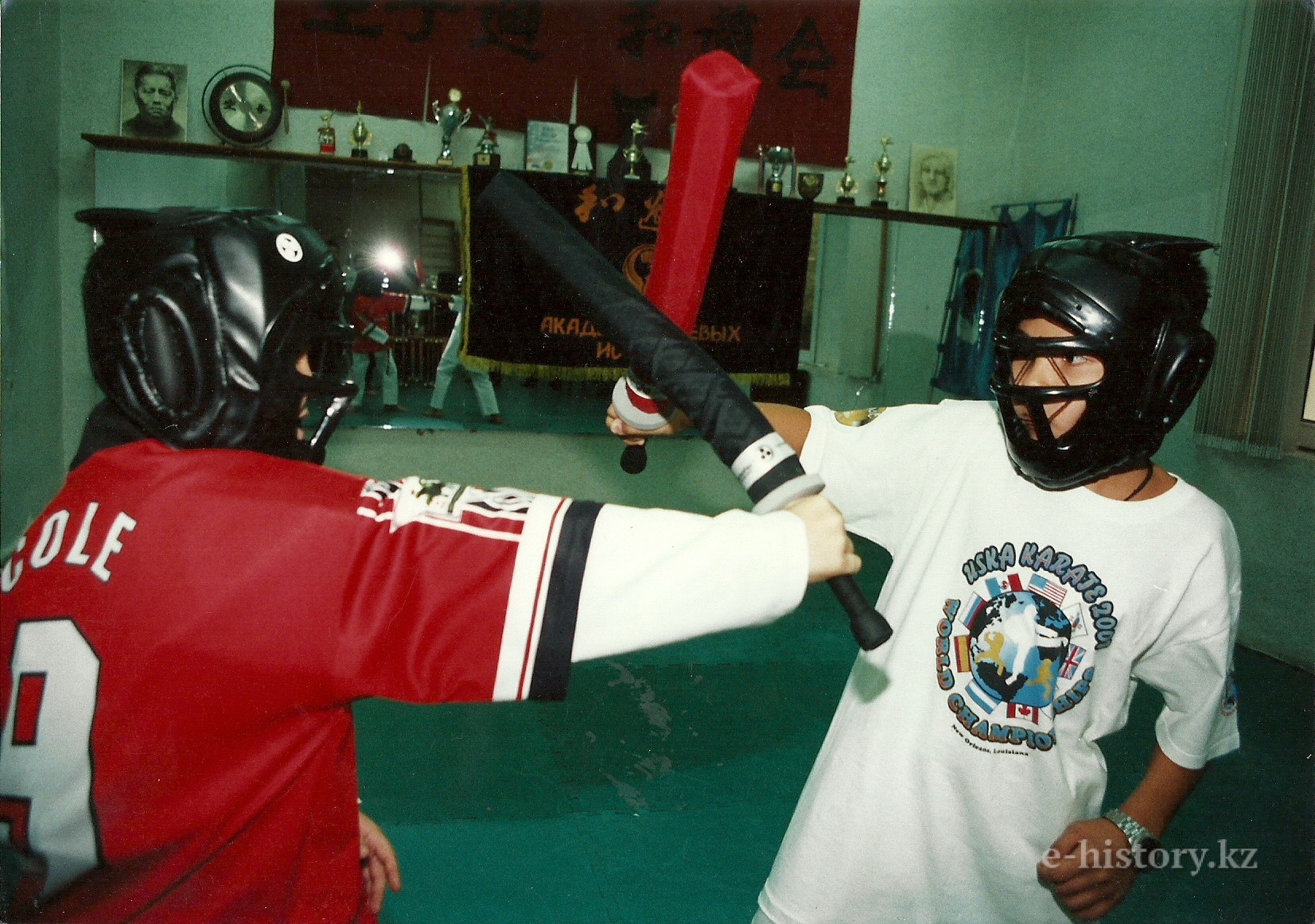 In 2001, the first big tournament we held in Almaty in the Sports Palace named after B. Sholak, it was called "Snow leopards". Then we made official presentation to kylysh. After that the karate championship, in program of which included group competitions in kylysh for children 8–9, 10–11 and 12–13 years, is held annually. It is the team competitions when each district represents "wall" — three athletes of different age groups who compete with representatives of other areas. 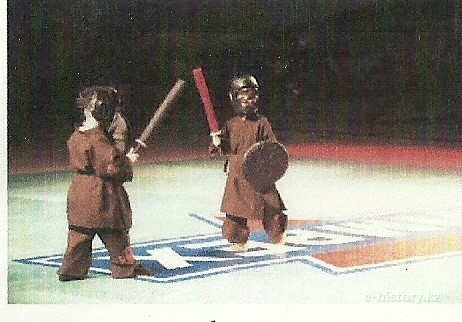 While training children, we also tell them about history of the Kazakh people, the Code of Batyrs. If a man became a batyr, then it is until the end of his life. There was a professional army for protection of the territory against enemies. These warriors honored this Code of Batyrs. Mostly they were hereditary batyrs. A boy from his childhood had his mentor, the well-known relative or friend of the batyr, who directed the boy thought his life. He trained him how to use weapons, firstly, using wooden swords, spear and cudgel. Later, he could use real weapon. And at the age 12–13 years could participate in battles, where he received his first baptism of fire.

— What other methods were used in the training of professional soldiers?

— Boys were trained since their childhood. Also many other national games, for instance, kokpar, kylyshtasy, naizalau (fight with spears) promoted development of certain qualities of the warrior. There were many games to develop accuracy, development of farsightedness, for instance, "asyk". Unfortunately, a lot of games for kids were forgotten over the time.

— Can we consider Kazakh national wrestling as part of training of future soldiers?

— Partly, yes. However, such competition which was arranged on celebration, commemoration and weddings. Except it, there was one more ritual game at Kazakh culture, called «saigyz», which is the kind of knightly duel. Later such tournaments were forgotten or even more forbidden as many people died during them. Even women could participate in saigyz.

When begun our works on revival of kylyshtasy we faced with some difficulties. Firstly, it was the large time gap, during of which many things about this art were forgotten. Similar case happened in Japan. After numerous prohibitions and eradication, Japanese martial arts started to revive only after defeat in World War II, when it was necessary to recover spirit of Japanese people.

We started working on techniques of kylyshtasy and started to ask masters. The archeologist Stas Potapov, who opened a pilgrim military place for soldiers near Tamgaly Karakyr, helped us a lot. Elders gathered at this place. Decision whether to be at war or not, devotion of soldiers and election of chief commander were made at this place. Many images of soldiers remained on the rocks of this place. All this helped us very much in recovery of kylyshtasu techniques. Also the artist, historian, specialist in the weapon Akhmetzhan Kaliollah helped us a lot with restoration of a historical basis of kylyshtasu.

— When you began revival works?

— It was 90s. My entire life I was engaged in karate. At some point it became interesting to me, what martial arts existed once in our tradition. We had assumption that there Kazakhs at that time had fisticuffs like karate and wushu. The more we went deep into searches of confirmation the clearer became the fact that we never had it, as we always used the weapon. And as we know, karate and wushu had been developed in the conditions of the prohibition of the weapon.

— Nowadays, does kylyshtasy have the same rules as it had many centuries ago?

— Yes, we recovered rules and the most important the techniques.

— Are there any other types of martial arts that have been revived today?

— Now we are trying to work with "naizalasy", and then we need to work with "aybalta" — fight on axes which as historians speak, played a big role in battles with Dzhunghars. They were very strong in the Mongolian technique of possession of a long spear which was applied also by Kazakhs.

Aybalta — very ancient type of weapon which is imprinted in rock paintings. In addition to peak, the Kazakh army armed also with hatchets. Feature of their technique in twist hatchet, it was unclear to what side it will fly. Such technique distracted the enemy. I liked when it was shown in the movie "Zhauzhurek myn bala". If you look at the khans’ images of the 19th — the beginning of the 20th century, all of them had aybala, which often hanged on their belt.

When did clothing of Kazakhs paluans (wrestlers) apper?