Home News Other A. Kashkimbaev: I. Esenberlin is a highly recognised author 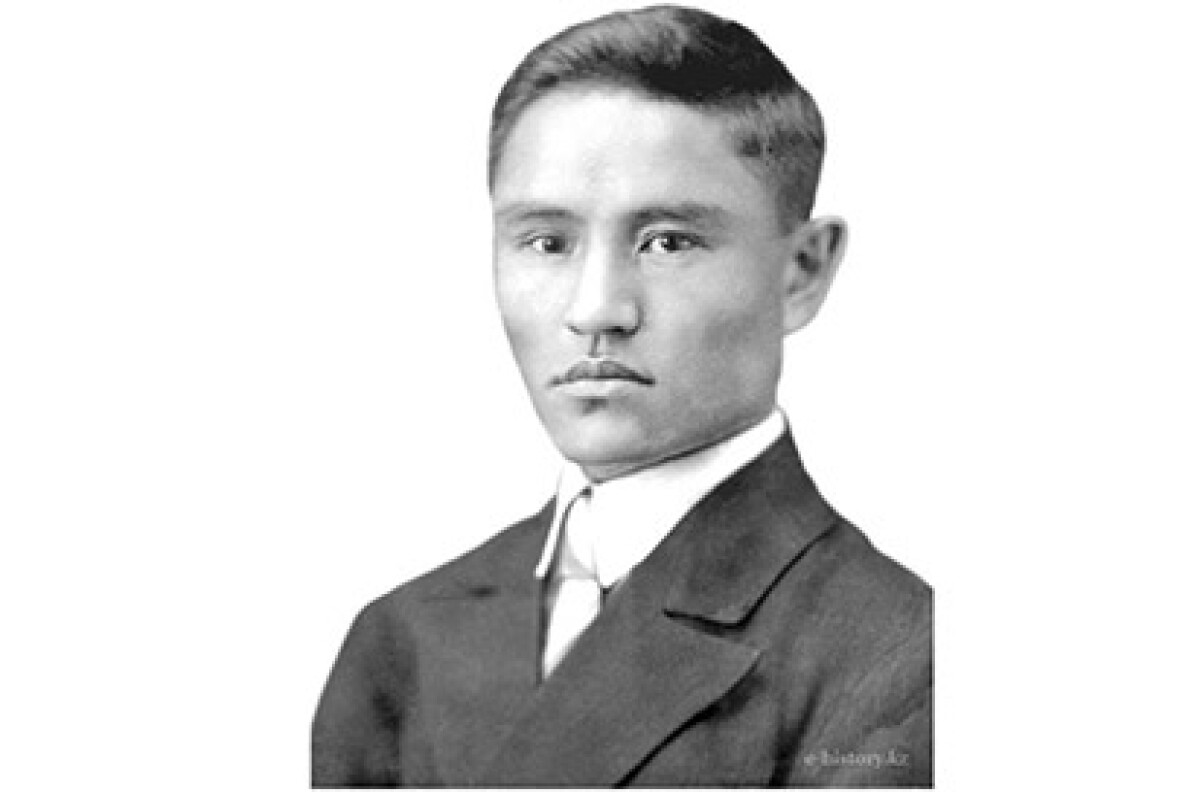 January 10, 2014 marks the 100th anniversary of the famous writer and engineer Ilyas Esenberlin.

Our website has prepared a special interview with Amangeldy Kashkimbaev, Candidate of Historical Sciences, and Associated Professor, who studied the life of the writer.

— How did you become interested in studying Ilyas Esenberlin’s life and work?

— It’s a good question. I started focusing on Esenberlin’s in the early 1990s. In 1993 I changed job and moved to the city of Akmola. One exiting situation happened. Director of the Kazakh Drama Theatre in Akmola Zhakyp Omarov decided to stage a play dedicated to Shamshi Kaldayakov. For this reason, he invited playwright Orazbek Bodykov.

Once I shared with them my point of view about the relations between Russia and Kazakhstan. Zhakyp asked me why I think so. Shortly before that, I was in a library and read Esenberlin’s book "The Nomads" which I read later in Russian language. I cited the example from the book when Abylay Khan and Bukhar Zhyrau discussed the idea of joining Russia. In briefe, I told Zhakyp and Orazbek that the big state wanted to colonise the little one and destroy the Khanate. Thus, Esenberlin’s work influenced me significantly.

Ilyas Esenberlin wrote that the state was unified and centralised. Everybody could easily see it.

The Kazakh Khanate was established a century and a half ago. At that time it just started acting on the global scene. Ilyas Esenberlin described that period in details in his trilogy. The writer’s deep thoughts and his diligence became the main reason why I started investigating Esenberlin’s biography. In 1993 I started collecting information and facts and two years ago began writing a book, which was published on my own funds.

— Your book is considered to be more scientific and educational than a work of fiction of monograph. Can you identify yourself as an expert on Ilyas Esenberlin’s life and books?

— To begin with I would like to tell you why I don’t think it is a scientific work. The work contains memories and quotations of the writer and his contemporaries. In addition the book has a chapter entitled "The history in works of I. Esenberlin and historical continuity".

It was my first work on the writer’s biography and creativity. How many books can be devoted to this issue! If I find new facts I will certainly publish them. I have not so many documents related to his life as most of them were lost. So, I believe that this book is my contribution to obtaining knowledge about Ilyas Esenberlin’s life and work.

— Ilyas Esenberlin is believed to be a writer and historian. Are there any moment in his works where the historical truth was distorted?

— The writer had a very busy life... He acquired a profession of a mining engineer, veteran of the Great Patriotic War, was a political instructor and obtained the rank of Officer. 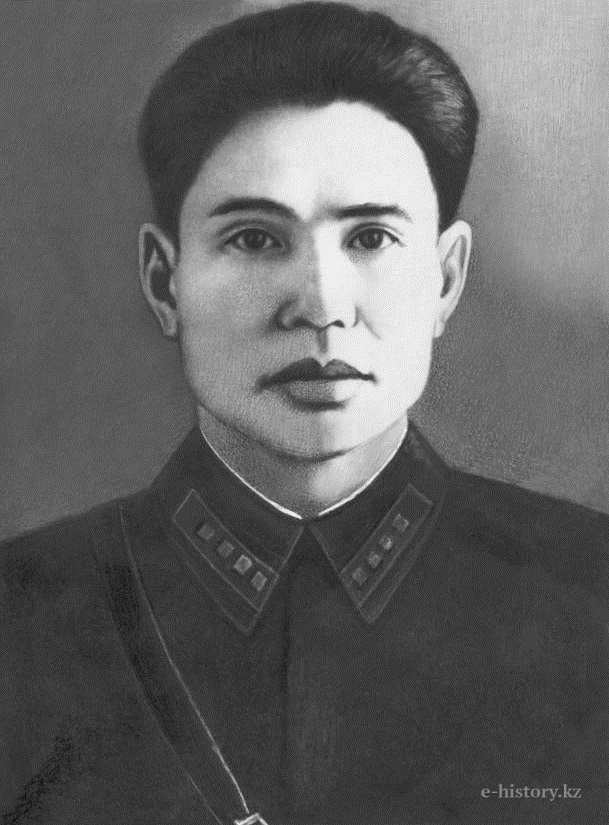 According to Esenberlin, during the War he wrote poems and dastans (a form of oral history). Being a schoolboy Ilyas sent his poems to a wall newspaper. "After the War I was wounded and could not work as an engineer anymore. It increased the focus on creative work, — he said. — I was in a state of creative search. I wrote a dastan "Aysha" devoted to Manshuk Mametova". Later, his poems about Adil Maykotov, a revolutionary who made his contribution to establishment of the Soviet power, and Al-Farabi were published. He also was the author of film scripts. In total he wrote around 10 scripts. But all of them were seriously criticised by Anuar Alimzhanov at a meeting of the Union of Writers. However, Esenberlin didn’t stop working. He was so interested in history that started writing historical novels. He was the author of 17 novels, 40 poems and 8 dastans.

His works are truth as it is without embellishing. This year we are going to celebrate the 550th anniversary of the Kazakh statehood. In the 1970s scientific disputes on the time of establishment of the Kazakh Khanate persisted. But Ilyas Esenberlin clearly stated that it happened in the 15th century.

— Ilyas Esenberlin was a talented writer. His works cover Kazakh history from the Middle Ages to the Modern History. He gave an accurate description of controversy between various communities in his novel "Aykas" ("The Fight") and received the State Prise for it. What is your opinion concerning his novels "Mangistau Maydany" ("The Mangistau Front") and "Altyn Attar Ayanady" ("Golden Horses are waking up")?

— It’s a relevant question. It is what I think about. Ilyas Esenberlin’s birth coincided with the period of formation of the Soviet power. He was born in 1915 and in 1923 was taken to an orphanage. Despite the difficult childhood, he settled in life.

He wandered the streets of the Atbasar half-naked and hungry and was sent to an orphanage. Esenberlin came close to becoming street hooligan. In the children’s house he had changed. Ilyas received an education and moved to Karsakbay where he worked as an instructor in Executive Committee. I believe, he was brought up in the spirit of the Soviet time. The Soviet state gave him a good education and helped to become a great person. However, in 1932-1933 when Esenberlin was an instructor in Karsakbay he wrote a letter to secretary of the provincial executive committee Tillyaev: "There is a famine in our country, why Kazakhs are dying? Russian workers in Karsakbay have better housing conditions. Their families receive supplementary nutrition. What if the ration can be slightly reduced in size and given to Kazakhs?" Younger brother of the writer Ravnak told about this. 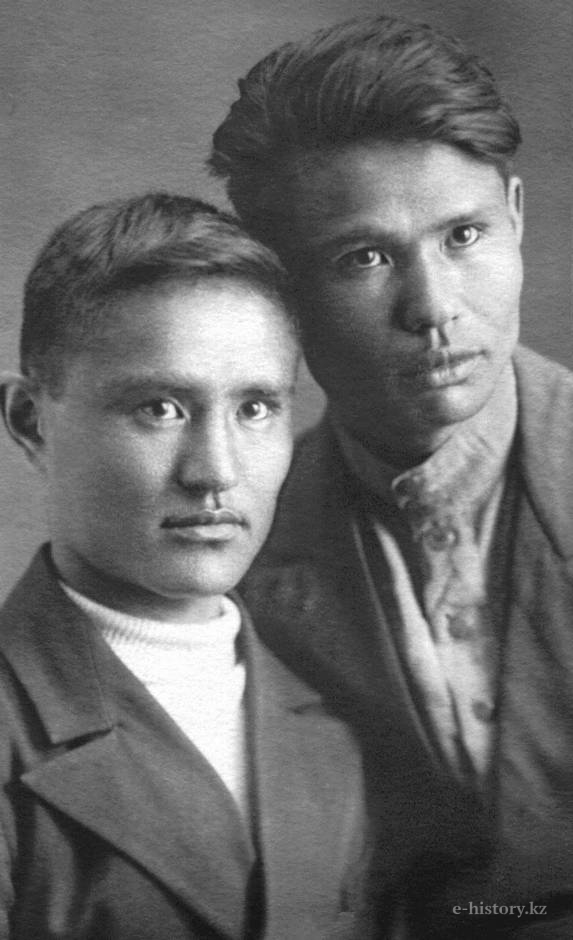 It is also worth mentioning that after the War Esenberlin worked at a film studio. But at that time he was excluded from the membership of the Communist Party. The reason was the origin of his wife Dilyara. Her father Khamza Zhusipbekov was a lawyer and worked as a commissar of justice. In 1937 he was recognised the "enemy of the people" and executed by shooting. 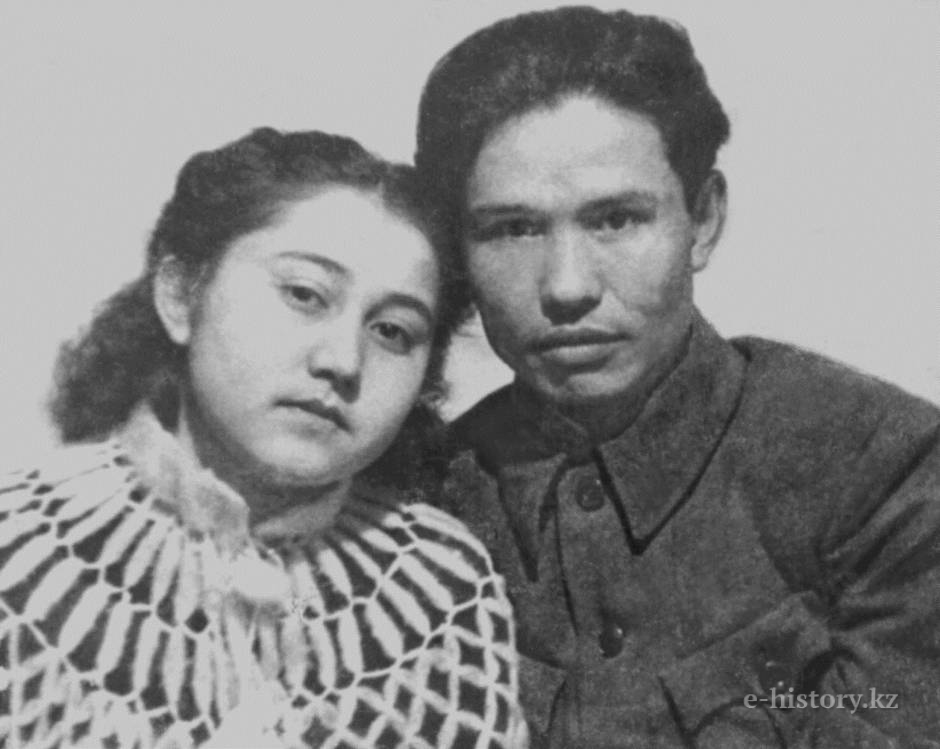 ... It is said that elder brother of Khamza Zhusipbekov lived near Akmola. Ilyas Esenberlin had a business trip to this city, found him and obtained the blessing. In the years ahead, one of his companions told about this event. He wrote an appropriate letter to Moscow and the writer was fired. Esenberlin find a work at a philharmonic society. Something happened there. 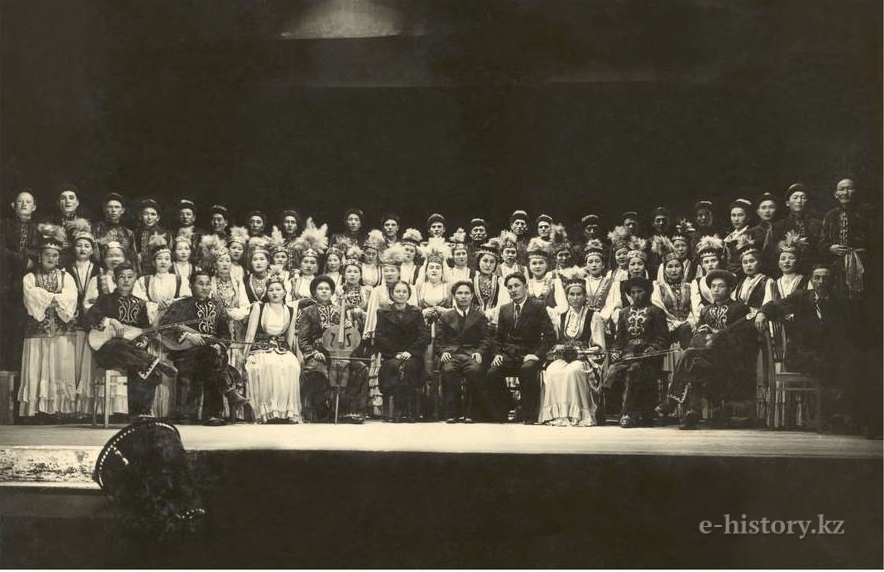 Esenberlin with his colleagues at the philharmonic society. He is in the first row, the sixth from the left

— When the philharmonic society started the funding spent on cultural days in Moscow, it turned out that a part of the money had disappeared. More precisely, the amount was 3 000 roubles. As everybody knows, the first suspect is a chief. That is why he sold his property and paid in the necessary sum. As time passed, some people again remembered this case. Ilyas Esenberlin was suspected of it. He was convicted and sent to Karakum Desert in Turkmenistan. The profession of mining engineer helped him there so much. He organised blasting on the construction of a channel. Only this saved him from real death threat. Three years later he was discharged and released. 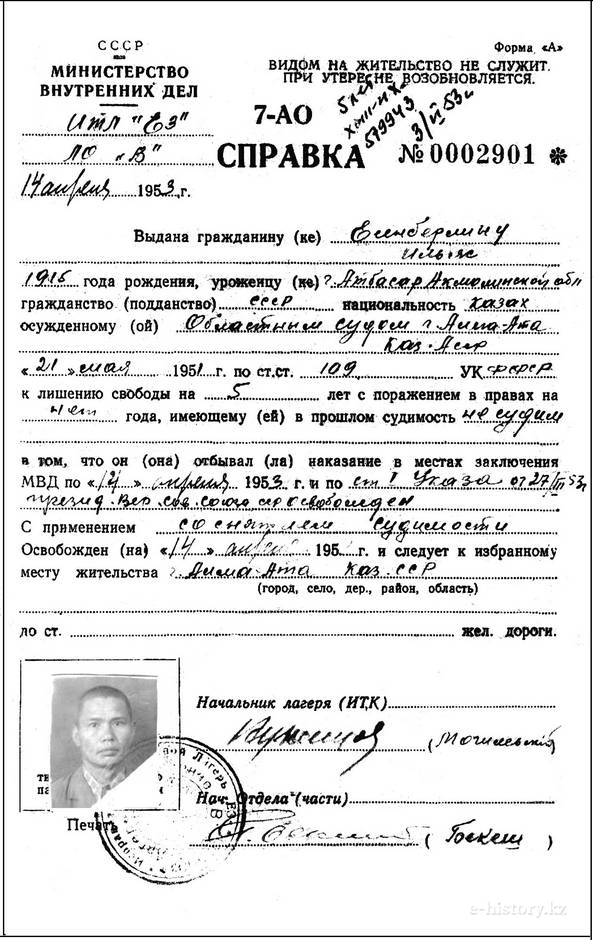 After his returning to Almaty he started writing again. Despite the fact that in his works he supported the Soviet ideology, the word "however" is very common in his texts. Working at the film studio, the director of which was Pyastolov from Sverdlovsk, Ilyas Esenberlin repeatedly raised the following question: "Don’t we have a Kazakh who would be at the head of the studio?" At that time all appointments were made by Moscow. Later the problem became more serious and resulted in the December events of 1986.

No matter how he respected the Soviet Government. First of all, he thought about ordinary people and paid attention to burning issues. He recognized himself as a Russian-speaking writer. However, he managed to take note of almost all collected by him fact from the history of Kazakhs.

The value of Esenberlin’s works is that he used historical facts. People love his books for that. They bought his novels as far as they were published. People always read the books of Ilyas Esenberlin. Therefore, his works will have a long history!

Web-site e-history. kz expresses the great gratitude to Ilyas Esenberlin’s daughters Raushan and Dilfruza for their assistance in preparing the article.