“Golden woman” was presented in the National museum of Kazakhstan 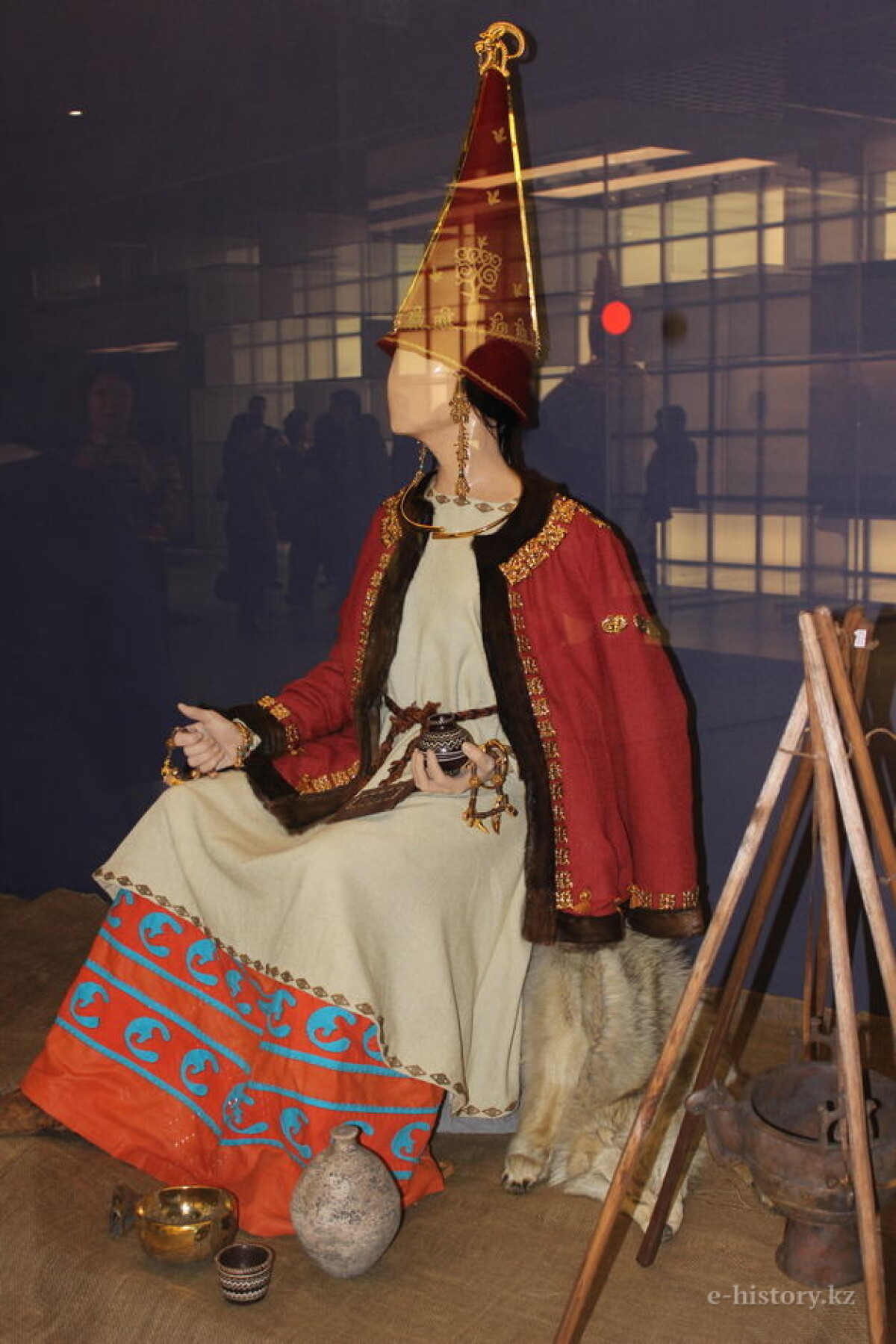 The "Gold woman" found in the Western Kazakhstan became one of the last surprising findings of the Kazakhstan archeologists.

In 2012, staff of the West Kazakhstan regional center of history and archeology found a kurgan complex of Taksay 1, where "Gold woman" — the girl of 15–18 years from elite was buried. Two years archeologists and restorers worked on recovery of history of this woman. And for the first time within the international scientific-practical conference "Tendencies and Perspectives of Cultural Integration" which was taking place on November 27–28 in the National museum of Kazakhstan in Astana, the unique find was officially presented.

The archeologist and director of the West Kazakhstan regional center of history and archeology, Murat Sdykov, also the famous restorer who worked on restoration of furniture of the woman and subjects accompanied burial, Krym Altynbekov told about the young woman, who lived in 4–3 centuries BC. 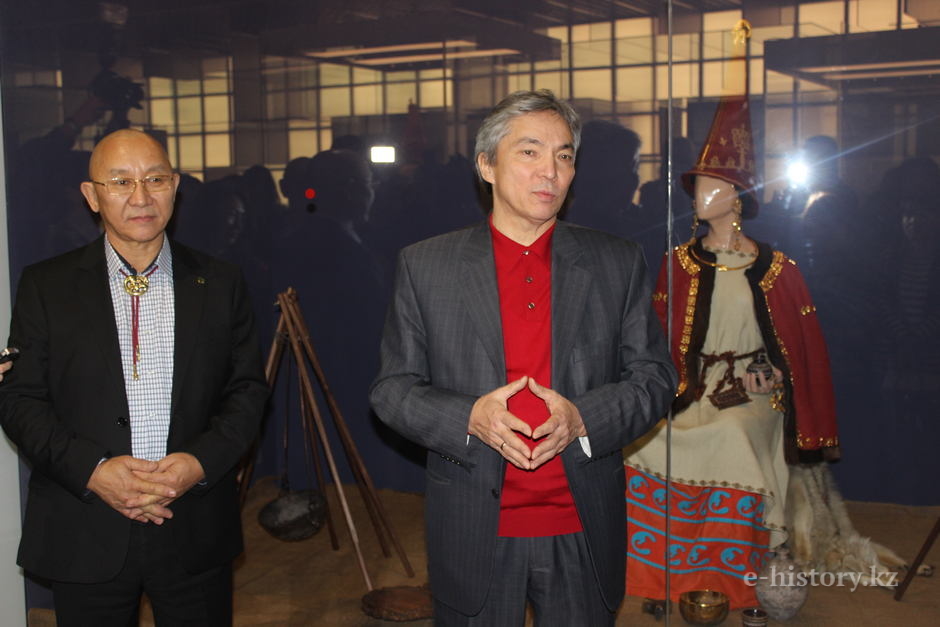 "We found it in 2012 in 40 km from Uralsk. She lived in 6–5 centuries BC. It was set by dating of bone remains, wood and metal. The big group of scientists of Russia and Germany was attracted with us to research. And only now, in 2014, we could present this finding and understand it" — says Murat Sdykov.

According to the scientist, the young woman of 15–18 years in front of us belonged to noble class, perhaps to priest. She was quite tall, 170 cm, with long hair and tattoo.

According to the archeologist, burial quite non-standard, the funeral camera is made in the form of a chariot which was inherent in either military estate, or notable estate. It has many accompanying materials, but there is no a single item of arms. It says that "Altyn khanshaiym" ("Golden princess") lived at the time of early nomads when the woman had not yet actively participated in military affairs. Later, in burials of Sarmatians 4–3 centuries BC, women would already have weapons. Scientists call such warriors "steppe amazons".

In 2015, large international conference with involvement of prominent scientists-sarmatologiest will be held. According to Murat Sdykov, it is necessary scientific debate concerning this unique burial because there are many obscure questions.

"First, the ceremony of burning the corpse was made by special purpose and consciously. There are many questions, whether it is traditional ritual, but there is no confirmation for it, or it was the act directed on concealment of certain circumstances. In our opinion, this young woman fell a victim of violent death" — according to archeologist.

It is necessary to tell that it is the rare case when the burial which is set fire saved unique artifacts up to now. The charred bones could tell about age of the woman, the wooden comb which is almost carbonized is the first image of ancient people. 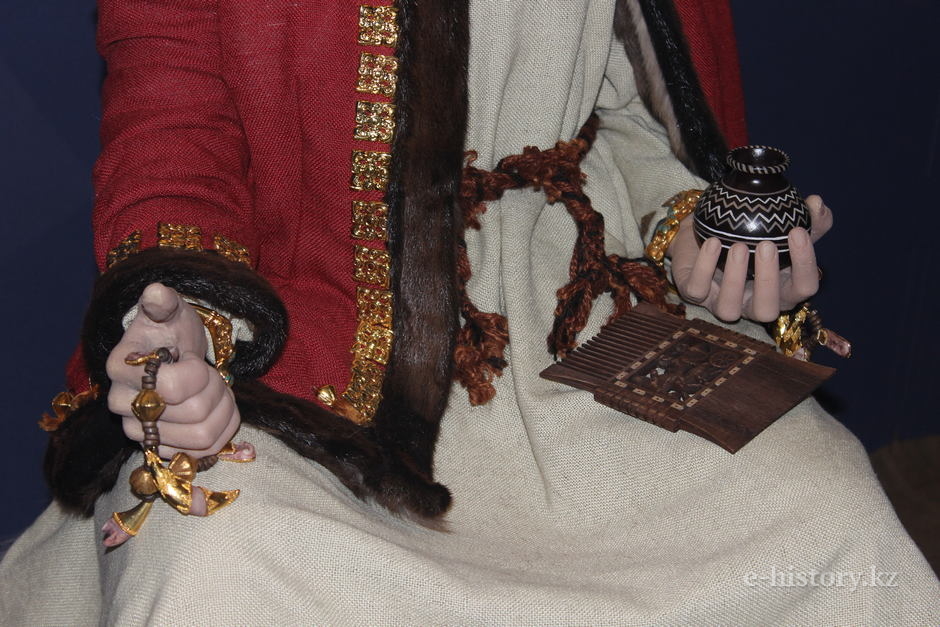 "Wooden crest, certainly, the most important element of burial. This crest was created for plotting of a tattoo which was very important at that time. All internal wooden furniture of burial burned down. The tree smoldered therefore not the crest, but its mold carbonized practically remained. It is a rare fortune that we were reached by this crest, this first image of ancient people. Krym Altynbekov and his staff did large work, having recovered not only the face of a crest, but also reverse" — tells Murat Sdykov.

Krym Altynbekov was invited to excavation literally in the very first days when archeologists understood that deal with unusual burial: "First of all archeologists did titanic operation here. If not their professional approach to an artifact, we would not see this finding today. We, restorers, came to the place of excavation. And it is very correct, because wooden products were burned and the form held only at the expense of soil moisture. When opened burial, the wind delivered the burned-down tree as sand. Thanks to that we arrived in time, and it was succeeded to save and recover finds" — the restorer reads.

Barrow No. 6 of a complex of elite burials of Taksay 1 where was found «Golden woman», was untouched. Scientist call the finding "gold" because of a large number of products and jewelry of this precious metal were found in the burial. Massive gold temporal suspension brackets, the tamga (sign) from gold plaque embroidered on a spin, wrist ornament from the canines of a wolf framed with gold — and it is not a full list of items that allow to call their owner "gold".

By the way, it is not accident that the woman sat on a wolf’s skin. Scientists believe that the wolf was a powerful totem of that time which confirms an unusual bracelet from canines of a wolf.

Today, everyone has an opportunity to see «Gold woman» in the National museum of Kazakhstan. This surprising finding which need further research with modern technologies, takes a special place among other expositions such as "Golden man", "Sarmatian leader" and "Sarmatian woman".