Chronicle of Congresses of leaders of world and traditional religions 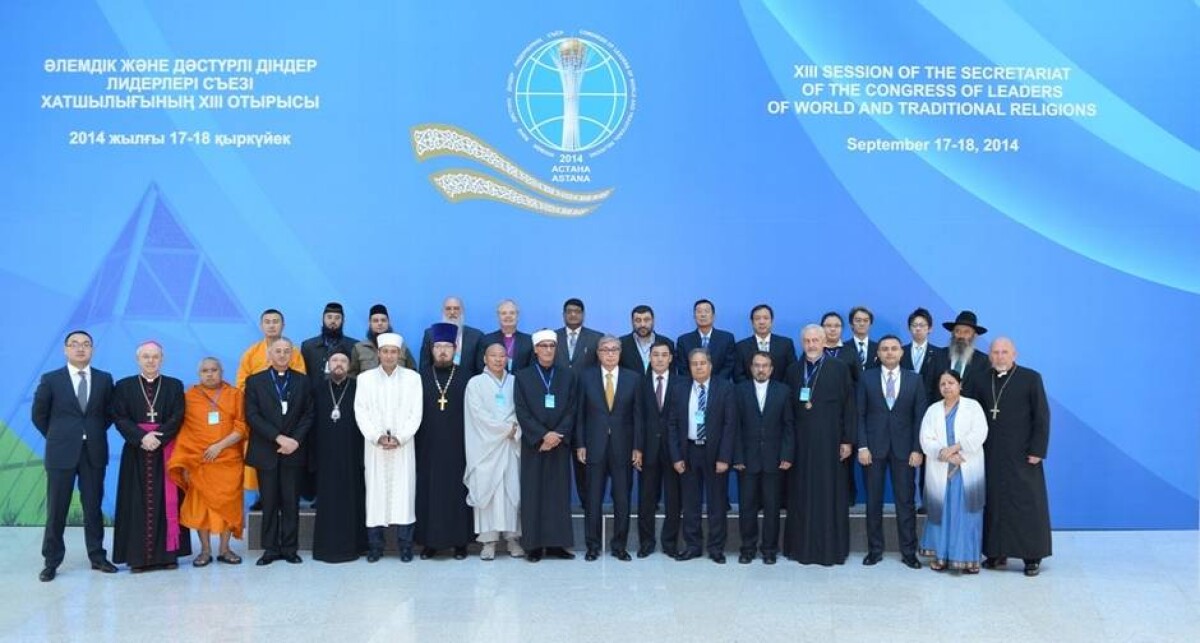 The 5th Congress of leaders of world and traditional religions will take place on June 10-11, 2015 in Astana

The main subject of a forum is defined: "Dialogue of religious leaders and politicians for the sake of the world and development". Such decision was made following the results of the 13th meeting of the secretariat of Congress.

History of congresses of leaders of world and traditional religions

The 1st Congress of leaders of world and traditional religions took place on September 23-24, 2003 in Astana. The most authoritative representatives of Islam, Christianity, Judaism, Shintoism, Hinduism and Buddhism took part in its work.

Dialogue of religions as conceptual idea of the 1st Congress and means of settlement of disputes was opposed to methods of violence and terror in the interfaith and international relations.

The success of realization of an initiative of Kazakhstan of holding an interfaith forum was confirmed by authoritative structure of participants of Congress and the high organization of this action.

Open discussions about a role of religion in the modern world and universal nature of the main moral values of any religion took place between participants of Congress.

A decisive step towards strengthening of consent and establishment of constructive dialogue between civilizations, faiths, countries and people was taken at Congress.
It was noted that interreligious dialogue is one of key ways of social development and improvement of welfare of all people.

The forum possessing historical value showed need of cooperation and unity of various religions for the sake of peaceful and worthy life of people of the whole world. The idea of Congress was supported by such influential peace policy as K. Annan, J. Bush, M. Thatcher, Jiang Zemin, N. Mandela, Zh. D’esten and others.

On September 12-13, 2006 in Astana the 2nd Congress of leaders of world and traditional religions under the chairmanship of the President of the Republic of Kazakhstan N. Nazarbayev took place. It passed in the new, specially built to holding a forum building "Palace of Peace and Reconciliation".

In performances of participants of Congress words of gratitude to the Republic of Kazakhstan and its President for the organization of the Forum of religions where dialogue of religions as means of settlement of disputes was opposed to methods of violence and terror in the interfaith and international relations were shown.

Following the results of Congress its participants adopted the joint Declaration calling representatives of all religions and ethnic groups for prevention of the conflicts on the basis of cultural and religious distinctions. The global need for replacement of "ideology of opposition" by "culture of the world" is capaciously reflected in this document.

The 3rd Congress of leaders of world and traditional religions took place on July 1-2, 2009 in Astana.

The first day of congress passed within the subject "Role of Religious Leaders in Creation of the World, based on tolerance, mutual respect and cooperation", and next day work was conducted on such thematic blocks, as "Moral and cultural wealth, world ethics", "Dialogue and cooperation" and "Solidarity, especially during crises".

Following the results of the third Forum participants adopted the joint Declaration in which urge the public to support and promote constantly efforts of religious leaders and the organizations for establishment of true interreligious dialogue, to support the dialogue of religions and civilizations directed on improvement of mutual understanding and respect.

The declaration adopted by participants of the 3rd Congress — a significant event in the history.

The 4th Congress of leaders of world and traditional religions took place on May 30-31, 2012 in Astana under the general subject "Peace and harmony as a mankind choice". The forum collected 87 delegations from 40 countries of the world.

Work of congress took place on sections:
1) "A role of religious leaders in achievement of a sustainable development";
2) "Religion and multiculturalism";
3) "Religion and woman: cultural wealth and modern calls";
4) "Religion and youth".

Following the results of Congress the President Nursultan Nazarbayev suggested creating the Internet resource devoted to questions of formation and strengthening of global tolerance and trust which could become part of the general electronic G-Global portal.

Through systematic carrying out Congress of leaders of world and traditional religions Kazakhstan sets all world community a striking example of consolidation of society. Our country has a vast experience of maintenance of interethnic and interfaith consent.