Home News Other Kazakh yurt – a house without corners

Kazakh yurt – a house without corners 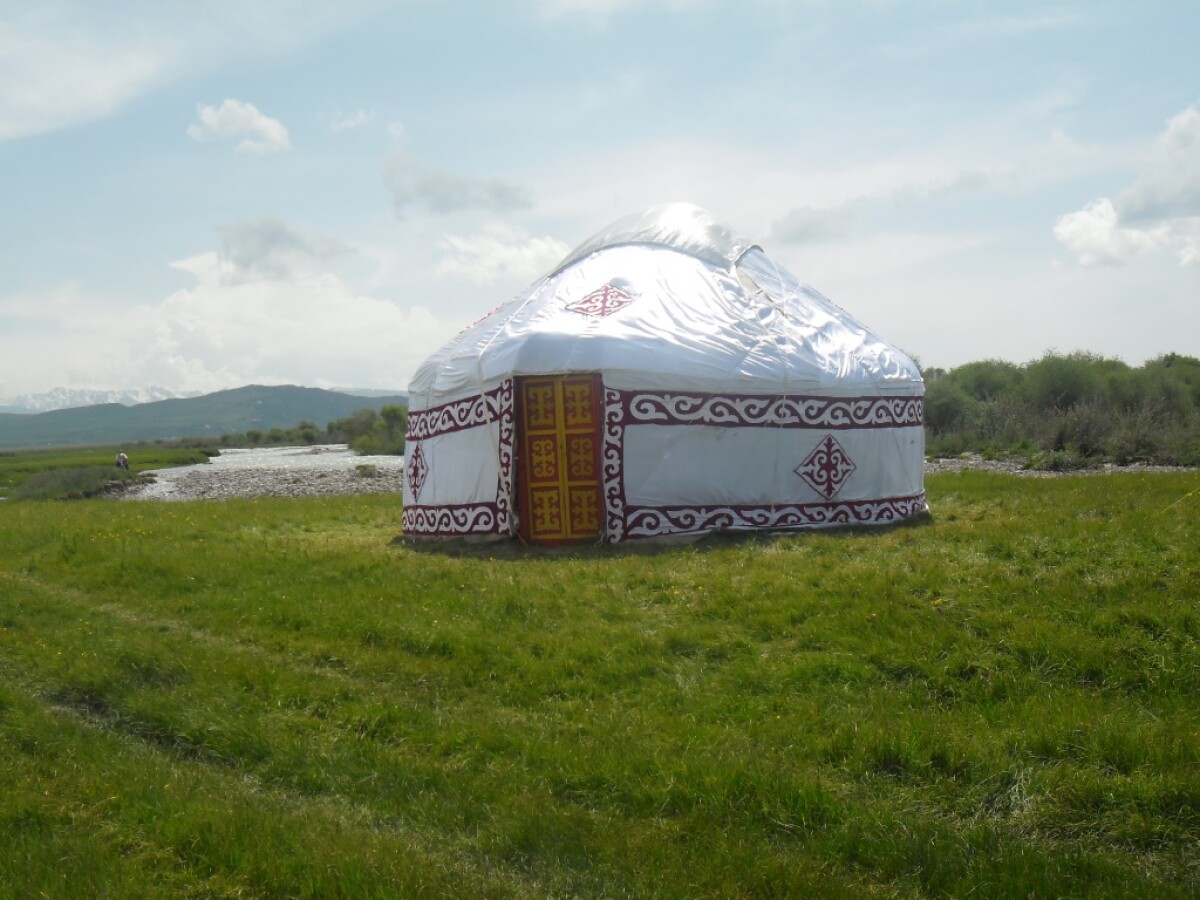 In the guiding essay «On the Kirghiz steppe» («По киргизской степи»), published in the journal «Around the World» (№ 50) in 1897, Russian explorer and researcher K. Nosilov wrote: «We were invited into the tent. Spacious and felt yurt was so clean and neat, for the first time we have seen such a one in Kazakh steppe… It seems there is nothing more pleasant in the desert in the summer as in the heat to go into the dim, clean and spacious tent…» [1]

Other Russian travelers-researcher described yurt with interest. Many centuries has passed since the yurt was appeared. However, up to now it remains the most reliable and convenient house for those on working conditions often change places of temporary camps. They are shepherds, geologists, herders…

Experience has clearly showed that the best home for the nomadic herders on distant (as for now and in the near future) is a sample of Kazakh yurt. In summer it keeps cool, in the cold and rainy days warm and dry. It is resistant against the wind. It can be easily assembled and disassembled, thus very convenient for traveling [2]. Very good description of the yurt is preserved in the following folk epics: «Oguzname», «Kitabi Korkut», «Manas», «Kozy Korpesh — Bayan-Sulu» and «Kyz Zhibek». The description of the yurt is found in the writings of scholars and travelers of 16th- 18th centuries like Razbihan, O. Peschel, I. Falka, P. Palasa, I. George, Ch. Valikhanov, B. Zalesski, B. Fedchenko, A. Yakobi, P. Makovetsky, O.Kharuzin, A. Gaines and so on. Yurts as a subject of household life of Kazakhs widely exhibited at various exhibitions. The yurt Almesa was sent to exhibition to Paris in 1861. Ch. Valikhanov’s and Aryngazy Hankozhin’s yurts were shown at the exhibition at Moscow University in 1867. Meiram Zhanaydarov’s yurt was shown at the 3rd Congress of Orientalists in the St. Petersburg in 1876 [3].

The yurts were divided into 3 main types: 1) yurt — housing; 2) the front the yurts (an yu, an orda, boz yu, otau yu); 3) camping tent. In addition to them they were yurts for cooking, yurts-warehouse, etc. Temporary tents, small and with simple design were used in campaigns and in traveling.

Kazakh yurt — kiyz yu — belongs to the Turkic (Kypchak) type collapsible lattice-felted buildings, «which from the constructive point of view has not been surpassed by any of the nomadic people and is the most perfect of mobile homes» [4].

Compare with the Mongolian it has a higher domed shape roof to withstand hurricane-force winds, rain and snow drifts. Academician Margulan believed that compare to the carcass or earthen modern home felt yurt is relatively late, which transformed the basic elements of its early prototypes [5]. Kiyz yu consists of beautifully curved folding lattice walls — kerege, arched poles — uyk and upper hoop- shanyrak. All of this is tied with ropes and rugs, covered on each side by four tuyrlak, over them there are uzuk and tunduk [6], which compose the walls and roof of the home, protects against bad weather.

From the ancient time Kazakhs considered white yurt — ak yu as a symbol of wealth and prosperity. It had 6–8 kerege, often 140–150 uyk, twice more than usual, i.e. dark yurt — kara yu. Ak yu was covered with white felt, tightened in its cylindrical part of the mats and at the top, where it attached uyk with wide strip of carpet — baskur. All sorts of strings and hanging decorations — tangysh, shanyrak-bau, arkan, uykbau, zhelbau, ayakbau and other were constant accessories of Kazakh yurts. The doors of yurt — sakyrlau were decorated with fine carvings, bone inlay or painting, also were covered by a felt curtain. Small yurts otau yu were raised for newlywed. Wealthy nomads usually put the small yurt — tuyrkykuy with small shanyrak, during the sort stops. Outside of such yurt was covered only with taurlyk, which go from shanyrak to the ground, and shanyrak — tunduk.

Transportable yurt — zhol yu or ablaysha, is a small, three or four kerege, with short and petite uyk, shanyrak and tent. Kos — house of shepherds in contrast to the usual common yurt had a conical shape due to the direct poles-uyk, stuck into the ground and tied up hair rope inserted into the holes at the ends. In this case, poles performed the functions of lattice walls — kerege and set.

The degree of the economic status of its inhabitants could be determined by the size and interior decoration of the yurt. For example, poor people had small, narrow, sometimes without shanyrak, three or four folded yurts. Often they were treated with two deployed and bonded with each other on top of kerege, covered only with one dark tuyrlyk. This type of housing called shaila — hut. The poorest people set tent — booths of three connected at the top of the poles — bakan, covered with solar or leeward side felt or plants.

Yurt as a house was very comfortable in summer, but in winter during the severe frosts, winds, which often tore off the felt cover and frame, the life conditions were very difficult. The interior of the yurt, as it was confirmed by research ethnographer M. Mukanov, based on the best national traditions. According to him, various items made of felt, woven fabrics, patterned mats, wall hangings, embroidery, housewares, decorated with carvings, inlaid bone, painting, etc. kept the production cycles of the ancient masters and national foundations pattern creation.

A detailed description of yurt utensils can be found in the A. Divayev’s work «Ethnographic biography of the Kazakhs». All yurt covered with felt, carpets and mats. Hills of blankets and pillows can be seen on the top of the chests. In Kazaly County there are wealthy yurts which have painted wooden beds. Also there are iron beds.

Right from the exit there is chest is placed with the tea or dining facilities: a samovar, kumgan, basin, big wooden bowl — tabak (very large wooden dish called shara-tabak) and chara used to put meat and kymyz (mare’s milk). Қymyz and sorpa (bouillon) poured with a large wooden spoon, called uozhau. The biggest pouring spoon called chumich. Torsuk with kymyz and ayran hanged on the wall on the right of the entrance. Kymyz in torsuk mixed by wooden stirrers pishpek (hence the name of the city Pishpek).

Hanging clothes can be seen on kerege. From the left of the entrance there is carpet bag (aykkap), which is stored spare household objects: a feed bag, towel, rosary and female beads made of carnelian. Rosaries are pearl, wood and stone. Books in the yurt can be found very rare, but sometimes there are tales of the Kyrgyz and Arab life of Kazakh edition, also the Quran and other books of a religious nature» [7].

Usually the person entering into a rich yurt, entered into the unique world of the ornament. The floor was covered with carpets, tekemet, korpeshe — cotton blankets designed for the covering the seats, which were scattered with zherzhastyk — hard pillows, kuszhastyk, kopshik — soft pillows stuffed with feathers for most honored guests. Colorful carpets were hanged on the walls. 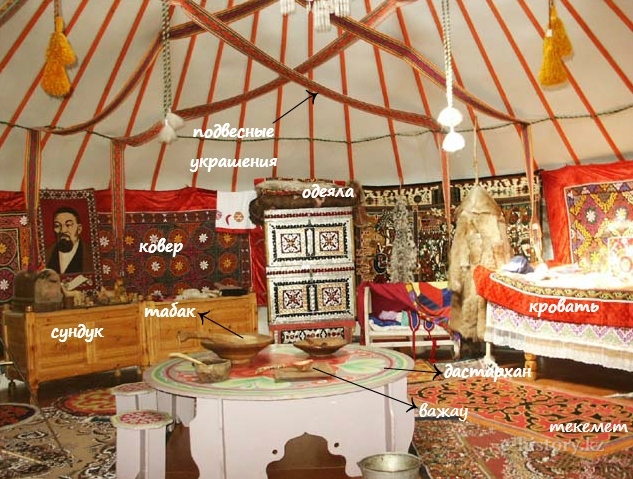 In the center of the yurt usually set hearth — a tripod with a boiler for cooking over a fire. Front yurt had round table for the meal, which was covered with dastarkhan- tablecloth.

At the entrance of the yurt on the left, there were hanging horse harness accessories and accessories for falconry. A little further there was a wooden bed — tosekagash for newlywed with shymshyldyk — canopy, which covers the bed from prying eyes. Near the tosekagash there were zhukayak — two or three pedestals, with stuffed household things felt or carpet covers — karshyn, ten, and on them two or three chests (abdre), over which folded blankets, pillows, to demonstrate the wealth of the family who lived in a yurt. Right from the entrance set asadal — folding cupboard, table cloths, napkins; kebezhe — chest for products, kitchenware. Wall scrip — ayakkap- sideboard, terkesh — cases for kese — bowls were also hanging here.

Along with the yurt part of the Kazakhs, wandering along with their cattle, had a permanent winter parking — kystak, қystau with residential and outbuildings. In the summer they were only those who were engaged in hay, primitive agriculture as haymaking, harvesting grain, housing repairs tied them to their wintering grounds. Sending their cattle to dzhaylyau along with some family members, they set right there next to kystau yurts and lived in them before returning the herd for the winter.

6. Tuyrlyk, uzuk, tunduk — the names of felt covering the yurt.

Material provided by Scientific Expert Council of the Assembly of People of Kazakhstan, an article from the book of the Ph. D. Professor A. Kalybekova «Folk wisdom of Kazakhs about education», Almaty, 2011.