The history of the Constitution of the Republic of Kazakhstan 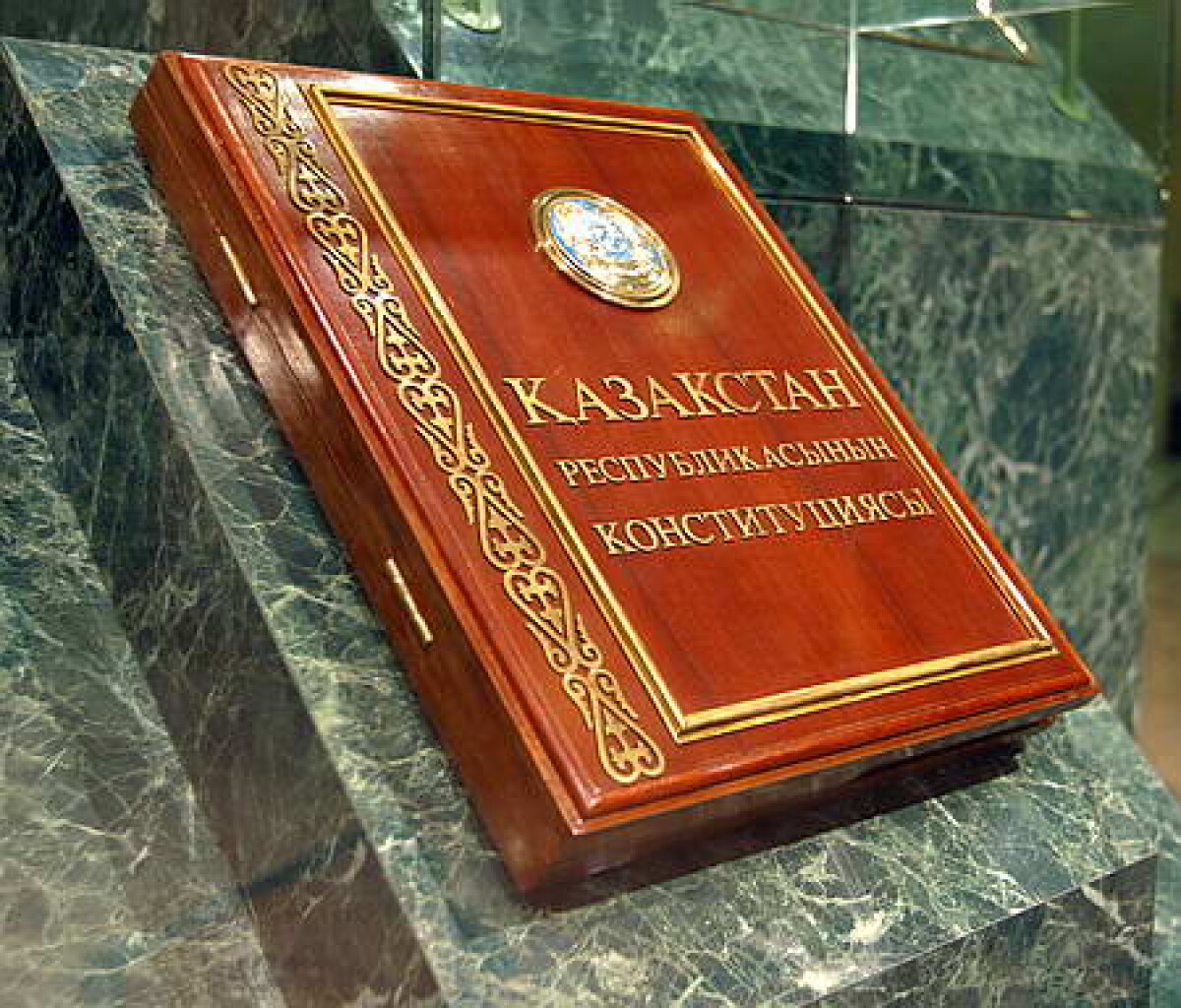 Constitution (this word appeared many centuries ago and comes from the Latin word “constitution” — structure) is the Basic Law of country which defines social and political structure, organization of public administration, relations between state and society, citizens and state. Constitution is one of the most important institutions of democracy. There were several constitutions of Kazakhstan.

The Constitution of the Kazakh ASSR, 1926

The final text of the first Constitution of Kazakhstan was adopted by the Resolution of the Central Executive Committee of the Kazakh ASSR from February 18, 1926 after the establishment of the USSR. This document was guided by the Constitution of the RSFSR of 1925 because Kazakhstan was a part of this country. The Basic Law defined the form of Government, state structure, political regime, structure of the bodies of state power, executive and administrative institutions. It determined fundamental principles of active and passive right to vote and budgetary law. According to this Constitution, being a part of the RSFSR Kazakhstan has equal rights with other republics.

The Constitution of the Kazakh SSR, 1937

The Constitution of the Kazakh SSR was adopted on March 26, 1937 by the 10th All-Kazakh Congress of the Soviets. It consisted of 11 chapters and 125 articles. It was written that “Out of the limits of article 14 of the Constitution of the USSR the Kazakhs SSR exercises its State authority independently, preserving its sovereign rights completely”. The Constitution of 1937 enshrined the following provisions: voluntary association with other equal republics for mutual assistance in economic and political defence (article 13), inalterability of the territory without consent of the Kazakh SSR (article 16), competence of the republic according to which the highest republican and local governmental authorities as well as bodies controlling implementation of law, protecting state and public order, rights of citizens, collecting taxes and so on (article 19).

At the same time the system of prosecutorial and judicial authorities was set up. People’s Courts were elected by people in regions on the basis of universal, equal and direct suffrage in a secret ballot, legal procedure should be carried in Kazakh language while in regions with the majority of other nations — in their language (articles 83-90).

The Constitution of 1937 defined citizens’ fundamental rights and obligations: the right to work (article 96), the right to rest (article 97), to obtain material support in old age in the case of illness or disability (article 98), health protection, guarantees of freedom of expression, press, assembly, rallies, street marches and demonstrations, integrity of person, homes and correspondence, the right of asylum for foreign citizens.

The Constitution of the Kazakh SSR, 1978

The Constitution of the Kazakh SSR was adopted by the 7th extraordinary session of the Supreme Council of the republic of 9th convocation on April 20, 1978. It consisted of the preamble, 10 sections, 19 chapters and 173 articles. According to it, all powers belonged to people who were divided into the following classes: workers, peasants and labor intelligentsia. The Communist Party of the Kazakh SSR controlled the system of governments and governance authorities (article 6). State cooperative-collective property and property of professional union and other public associations were proclaimed as the foundation of economic system in the republic.

The Constitution of 1978 defined national-state and administrative-territorial structure of the republic, competence of the highest and local authorities (articles 78-83, 97-139), principles of the electoral system, legal status of peoples’ deputies, institutions of the plan of economic and social development, state budget, justice, arbitration, procuracy supervision, and to name but a few.

In the beginning of 1990-s in the Kazakh SSR and later in Kazakhstan several laws considerably amended the Constitution of 1978 were adopted. According to the Law “On the Improvement of the governmental structure” of November 20, 1990, the Constitution was completed with the following provisions: the President was the Head of executive and administrative power, the Council of Ministers was transformed into the Cabinet of Ministers. There were other laws, including the Law “On Local Self-Government and Local People’s Deputies of the Kazakh SSR” of February 15, 1991, the Law “On Change the Name of the Kazakh Soviet Socialist Republic” of December 10, 1991, the Law “On the State Independence of the Republic of Kazakhstan” of December 16, 1991, the Law “On Citizenship of the Republic of Kazakhstan” of December 20, 1991, and so on. 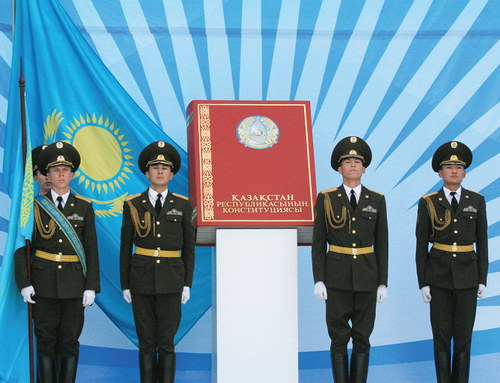 The Constitution of the Republic of Kazakhstan, 1993

The first Constitution of Independence Kazakhstan was adopted at the 9th session of the Supreme Council of Kazakhstan of 12th convocation on January 28, 1993. Its structure included preamble, 4 sections, 21 chapters and 131 articles. The Constitution absorbed many legal norms adopted with Kazakhstan’s state sovereignty: national sovereignty, state independence, principle of the separation of powers, recognition of Kazakh language as state language, recognition of the President as the Head of state, and judicial authorities — Supreme, Constitutional and Supreme Arbitration Courts, and to name but a few.

The Constitution of 1993 was based on the model of parliamentary republic. Along with the laying down Kazakhstan’s Independence the Constitution of 1993 reflected complexity and inconsistency of the early years of the country’s independence. On the one hand, it fixed legal frameworks for further transformation of all aspects of republic’s activity in the line of market economy and democratic state formation. On the other hand, the Constitution caused discussions on the competence of legislative and executive branches of power because the text missed this issue. This didn’t contribute to both the stabilization of political and social situation in the country and transformation of all aspects of public life. Moreover, some principal provisions of the Constitution related to the character of statehood, state language, private ownership of land and citizenship became the subject of public controversy.

The Constitution of the Republic of Kazakhstan, 1995

Since the adoption the current Constitution was amended three times: in 1998, 2007 and 2011. In 1998 19 articles of the Basic Law were amended and complemented. The changes affected the term and competence of the President, Deputies of the Senate and the Majilis; age limit for public servants specified in the previous constitution was called off. In addition, amendments made provisions for election of 10 Deputies of the Majilis from party lists according to the principle of proportional representation.

More significant amendments were adopted in 2007. In general, their idea can be explained in the following way: transition to the proportional representation system; strengthening the status of the Parliament due to introduction of the norm on approval of the nominee for the appointment to the position of the Prime Minister by the parliamentary majority and the procedure of the President’s consultation with party factions before the appointment of the Head of Government. At the same time, the People’s Assembly of Kazakhstan obtained constitutional status and the right to delegate its representatives to the Majilis and the Senate of the Parliament according to the established quota.

In February 2011 the Constitution was amended to establish constitutional basis for the announcement and conduction of extraordinary Presidential election.