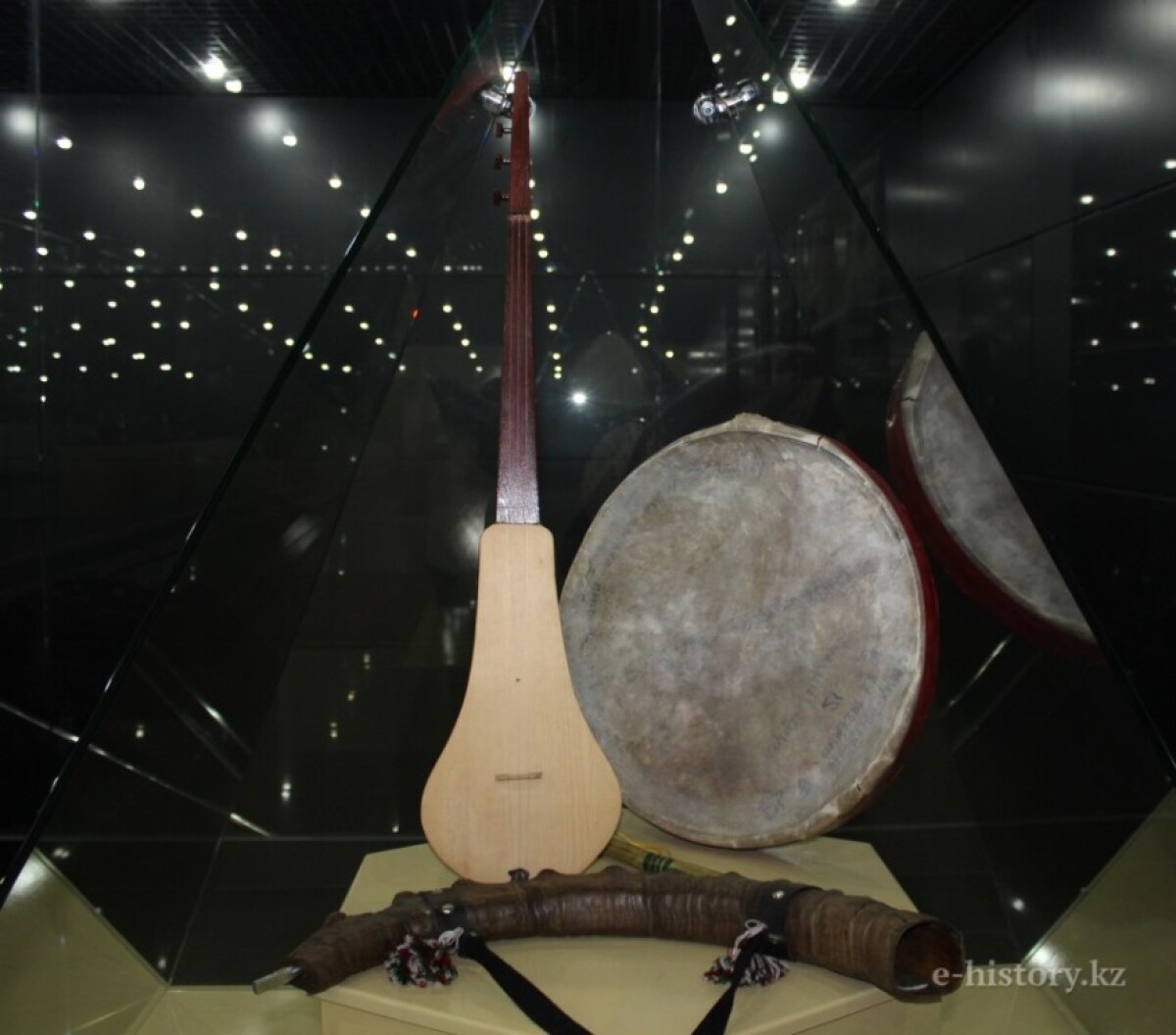 At this time, journalist of e-history.kz portal made cultural walk through the museum of Turkic Academy, located in the Palace of Peace and Accord in Astana.

“Our great ancestors in the Great Steppe, begging from Altay to the White Sea, set their world order. They left us the immortal heroic epic and inexhaustible source of spirituality. For the first time they showed to the world a sample of common home- they invented a yurt, iron, trousers, arrow, boots and stirrup...”

The President of Republic of Kazakhstan N. Nazarbayev

So, we will talk about the museum, which examines the history and culture of the Turkic people.
The President of the Republic of Kazakhstan N. Nazarbayev, spoke at the 9th Summit of Turkic-speaking countries, on 3 October 2009 in the Republic of Azerbaijan in the Nakhchivan, with a proposal to establish an international research center that would research the role and place of Turkic civilization in human civilization, engaged in the study of the past, present, and prospects of the Turkic World. This initiative has gained a real embodiment of May 25, 2010 — the opening day of the Turkic Academy in the Kazakh capital Astana.
If you go to the museum, which located on the second floor of known as “Pyramid” among the people, the first thing you’ll see — a copy of the head stone statue of Kultegin who lived in 684-731 years. 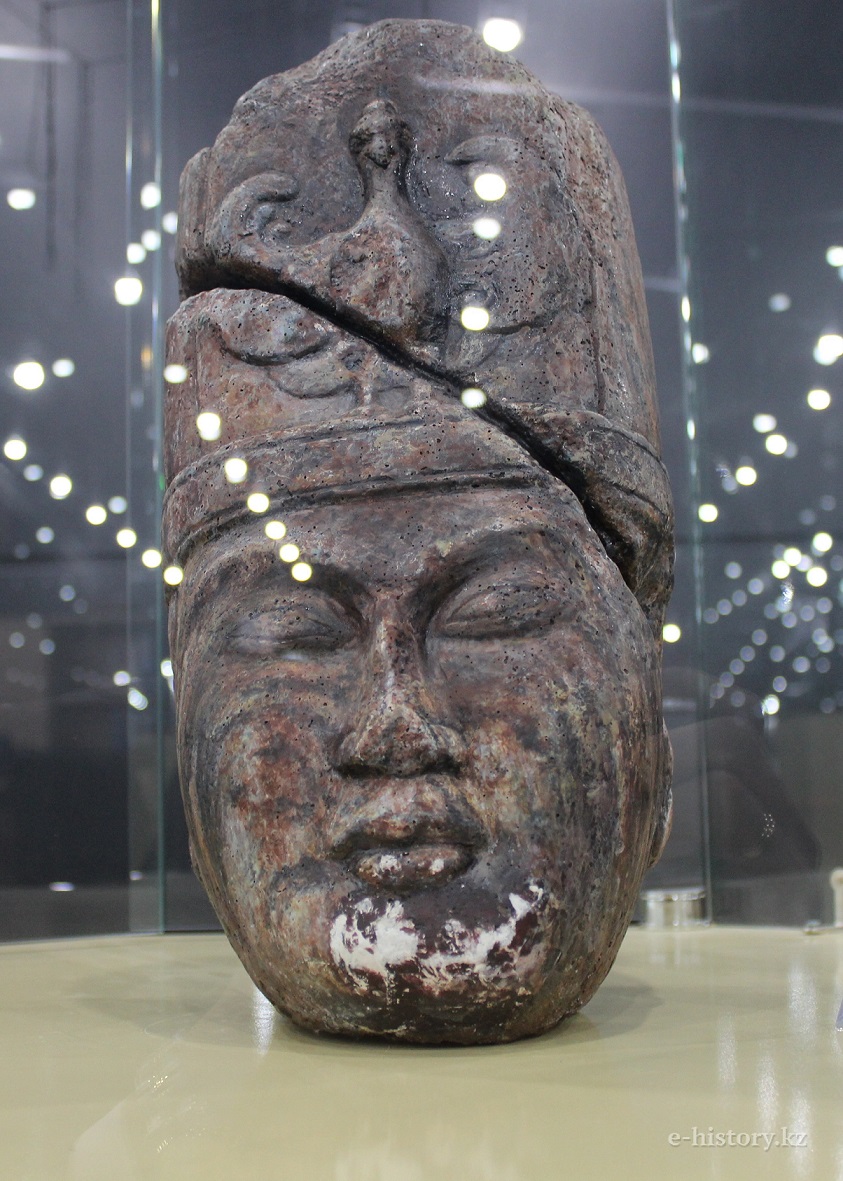 When Kultegin was 7 years old, his father Kutlyk died, and he was raised by the uncle Kapagan from the father’s side. He grew up very soon and the like other adults warriors began to fight with the enemies.
Famous Turk Bilge Kagan wrote on the monument of fearless warrior-Kultegin these words: “When my father died, the younger brother Kultegin was 7 years old. At the age 10, luckily to my mother Umay, Kultegin earned the title of hero”. 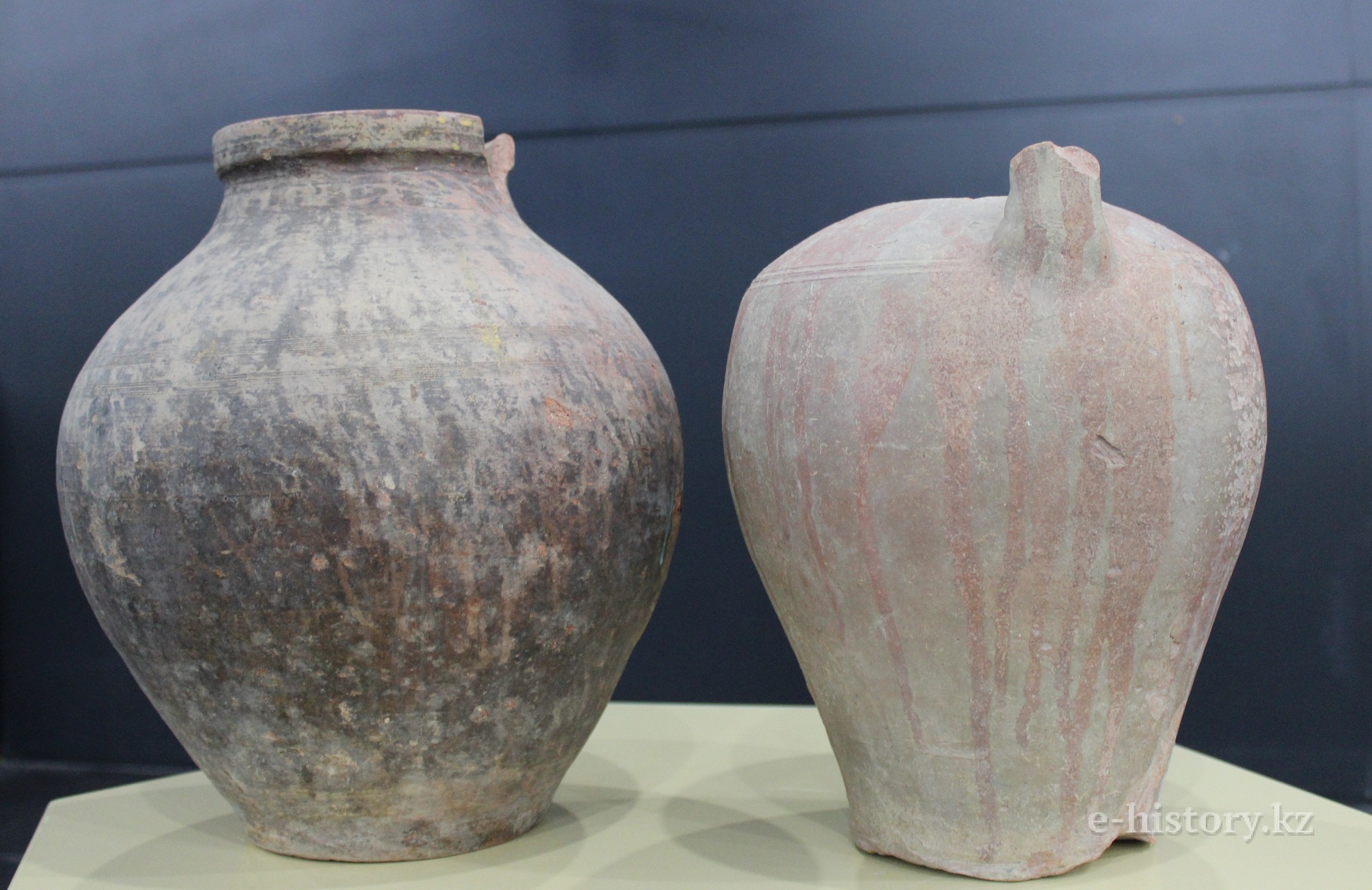 People of Neolithic period which inhabited the territory of Kazakhstan had been mastered pottery. Pitchers have become essential utensils of Turkic peoples. 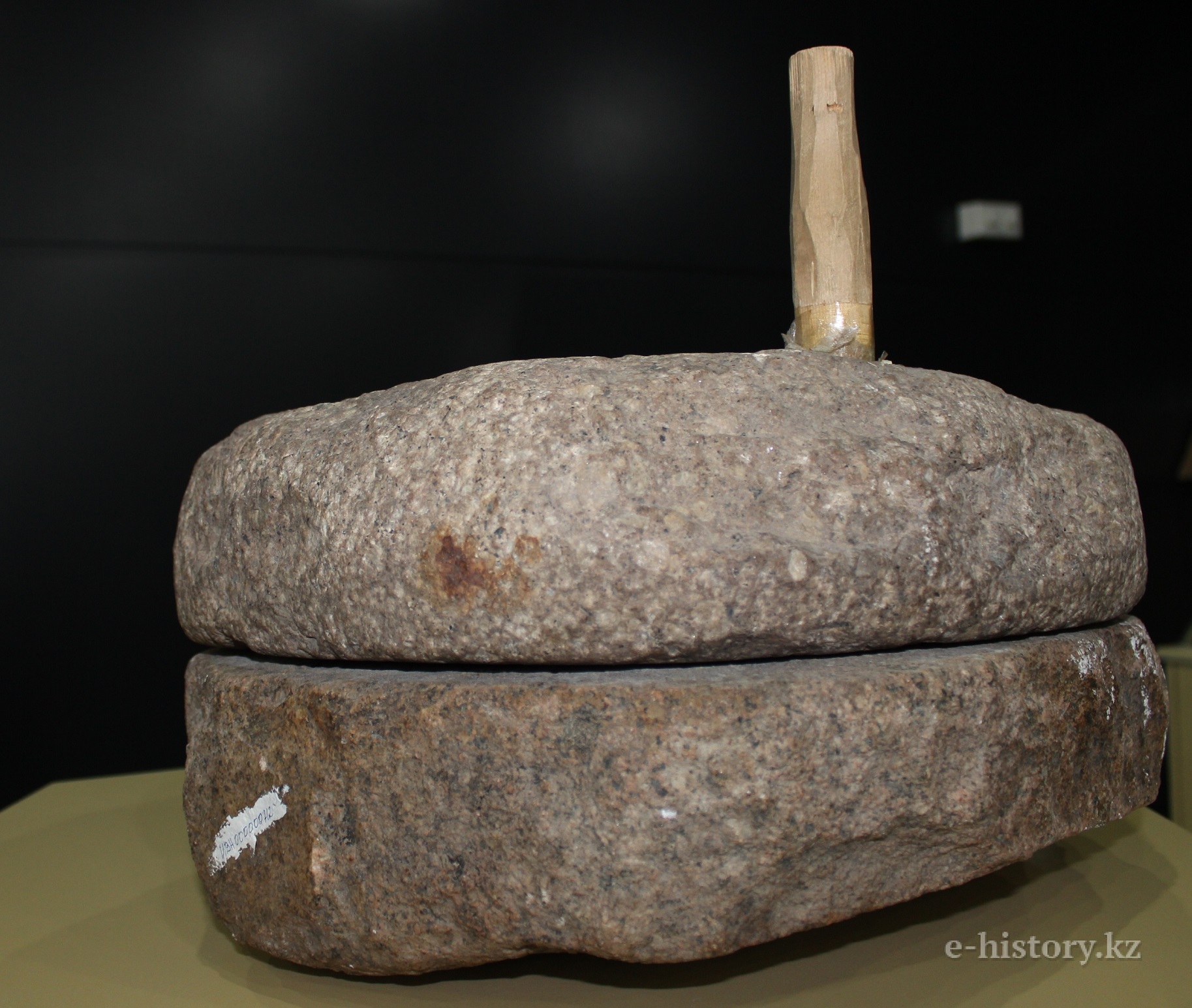 On the Kazakh land quern used for a long time, later it was displaced from use by water and wind mills, and now their places were taken by electric mill. Today, this exhibit is a reminder of our roots — the nomadic lifestyle of our ancestors. 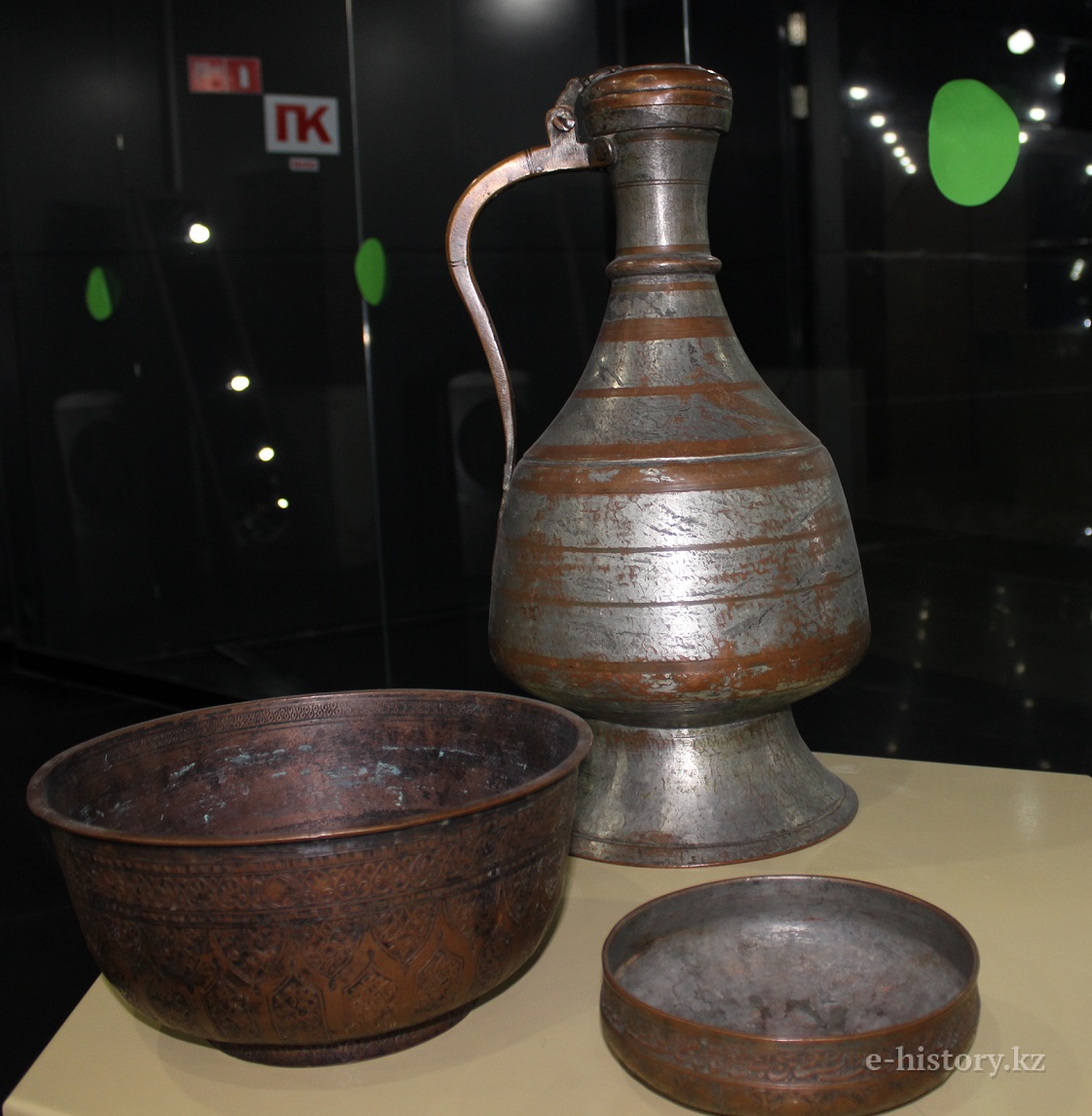 Samovar appeared on Kazakh land only in the19th century. It was so rare and demanded utensils, that in exchange for a Tula samovar our ancestors gave the horse. 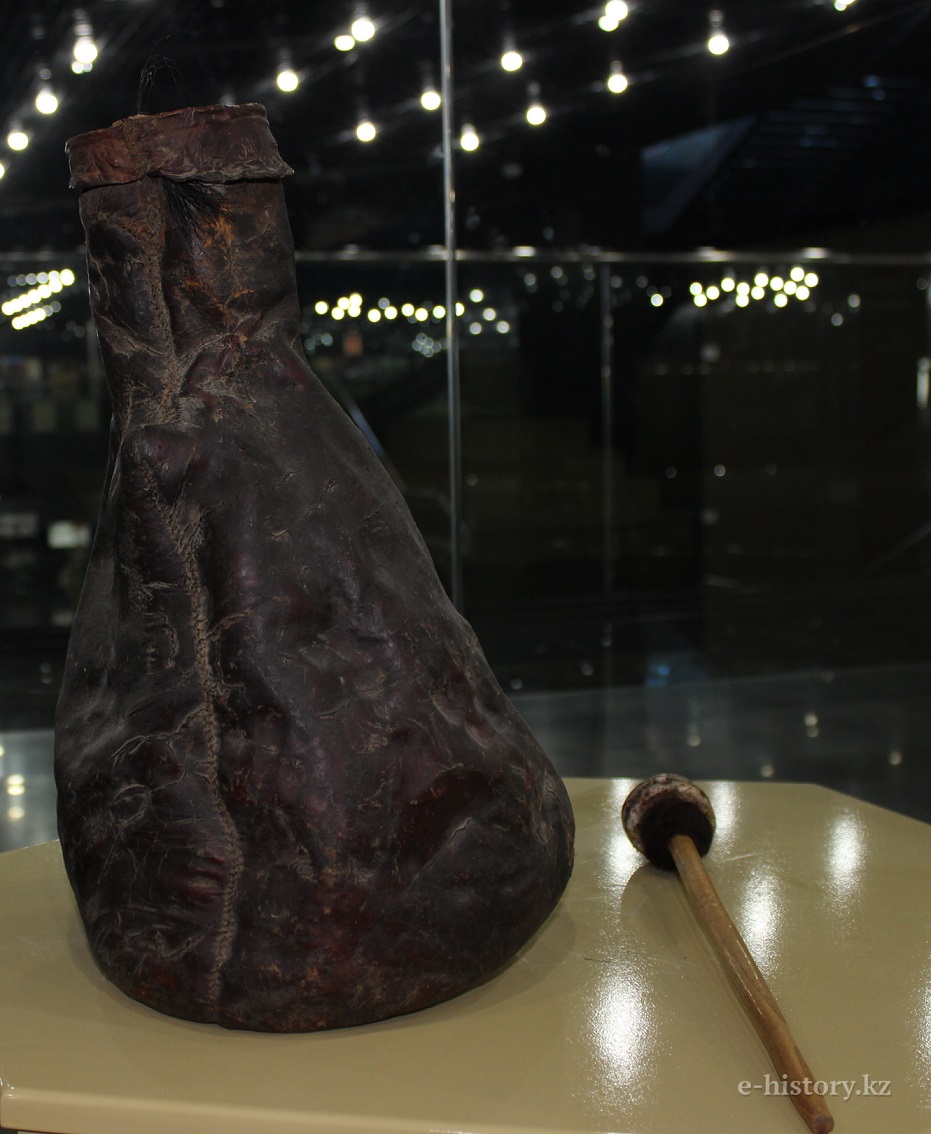 5. Flask, made in Kyrgyzstan in the 19th and 20th centuries, and the spindle from the South Kazakhstan. Original

Kazakhs, Kyrgyz, Karakalpak, who lived in Central Asia, used such variety of utensils like wineskin for domestic purposes. It was made of the neck part of the camel’s, deer’s or ox’s skin. Skin was twisted wool inside and went through the fire, and then tanned skin was shaped by pulling on the block, cut and sewed with thread. The last step is treatment of smoke. Wineskin, as sabu, was smoked with kidney of pine or juniper. 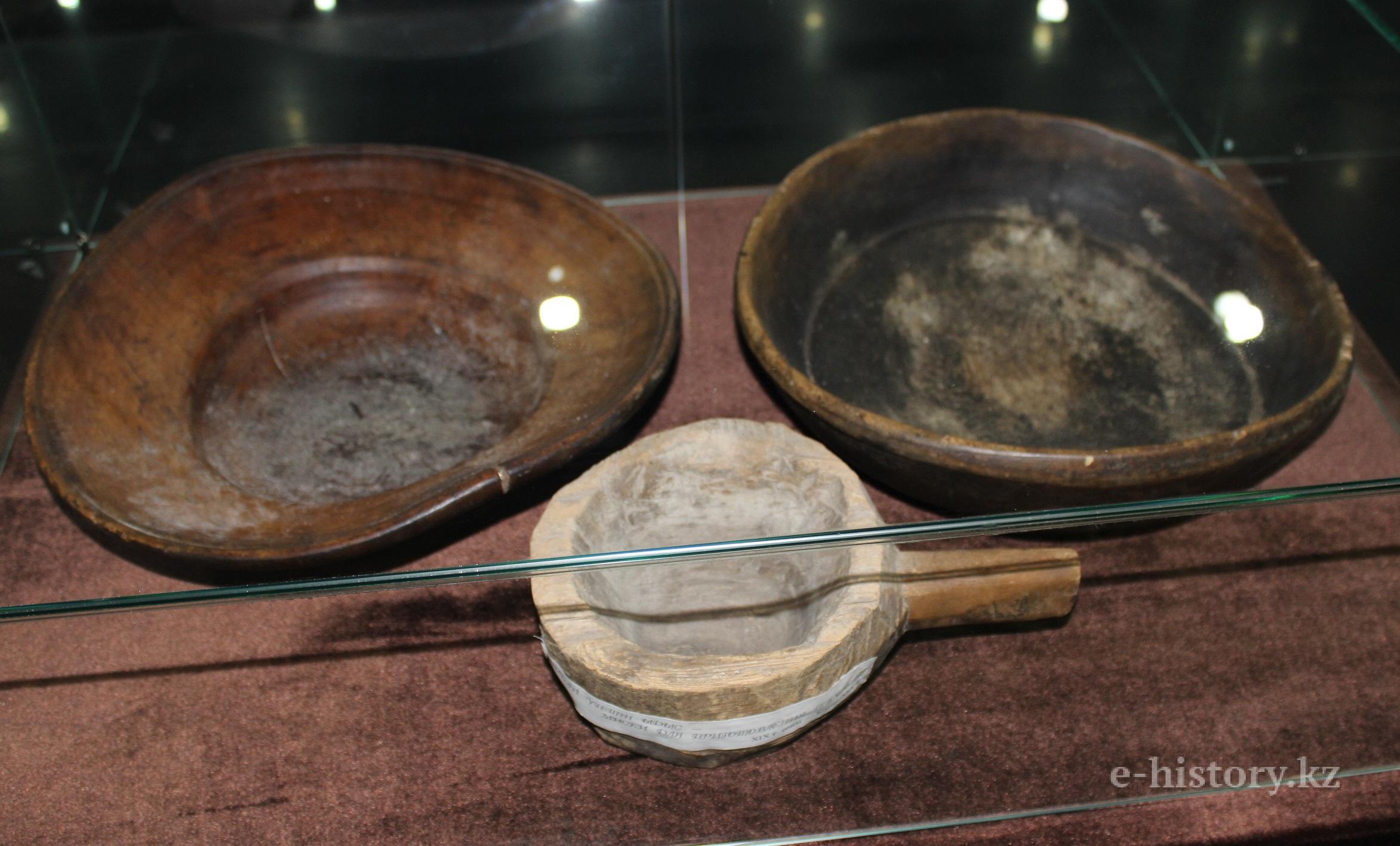 6. Dish for beshbarmak done in Central Kazakhstan in 1900-1950 years. Original

7. Stone for chopping the herbs, 3rd −5th centuries BC. Original

This instrument used to turn herbs, which have healing features, to powder. Our ancestors knew what herbs and roots should be used on a particular disease.

Elders and nobles have worn such silver belts. 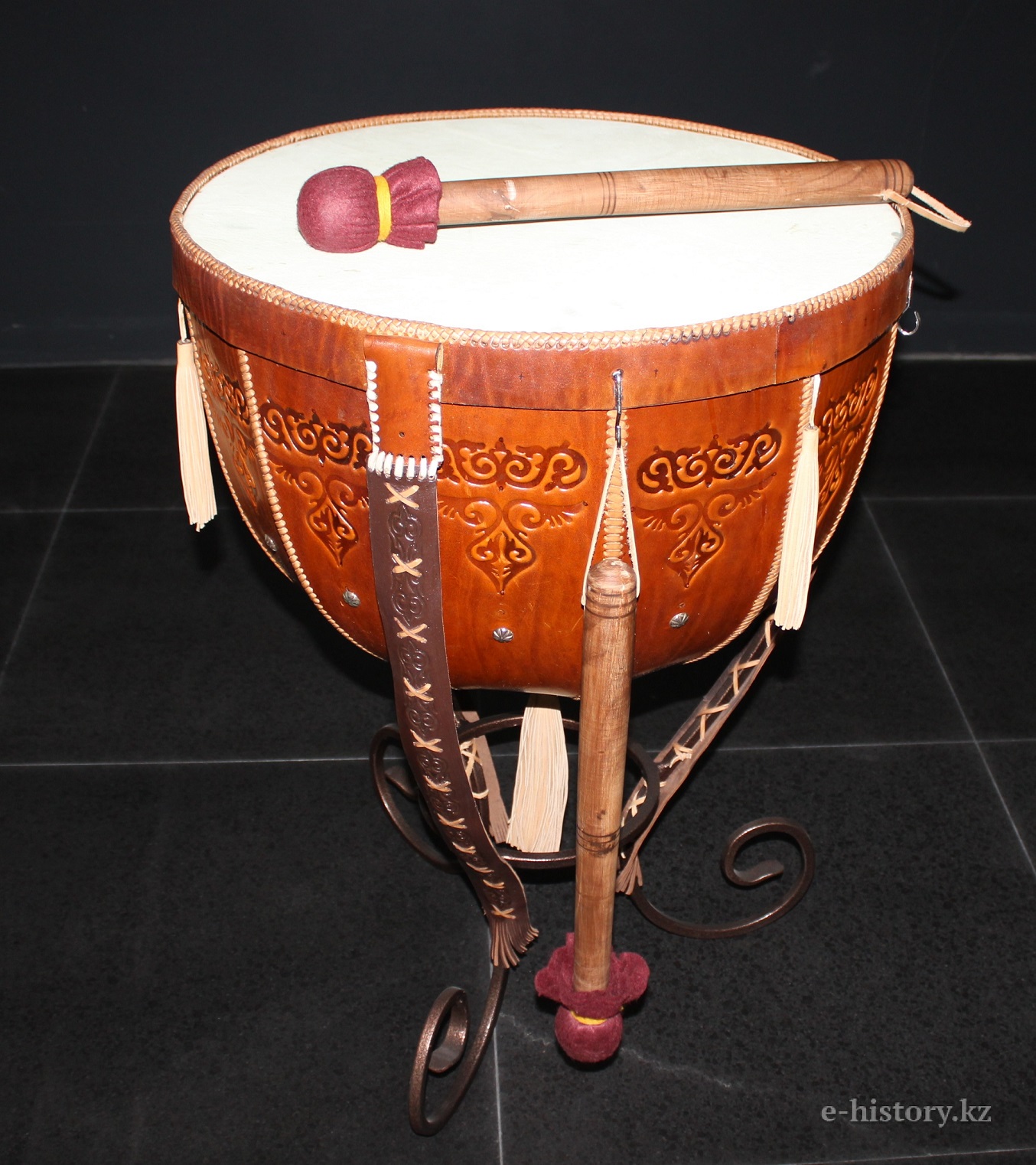 It is Kazakh percussion instrument, which was used as a military (signal) of the instrument, and sometimes used for hunting. Over time daulpaz became widely used for hunting and falconry training. It is boiler-shaped (or helmet-shaped) wooden cabinet, covered with leather membrane. A method of it manufacturing is considered one of the most difficult. The body of dauylpaz decorated is by horns, different stones and ornaments.

Dauylpaz is a tool without a certain height of sound, so it may have different sizes. The tool typically attached to the saddle. It began to sound after the beat on the leather membrane by the end of whip or hand. Today on dauylpaz played with wooden mallets with soft balls at the ends. 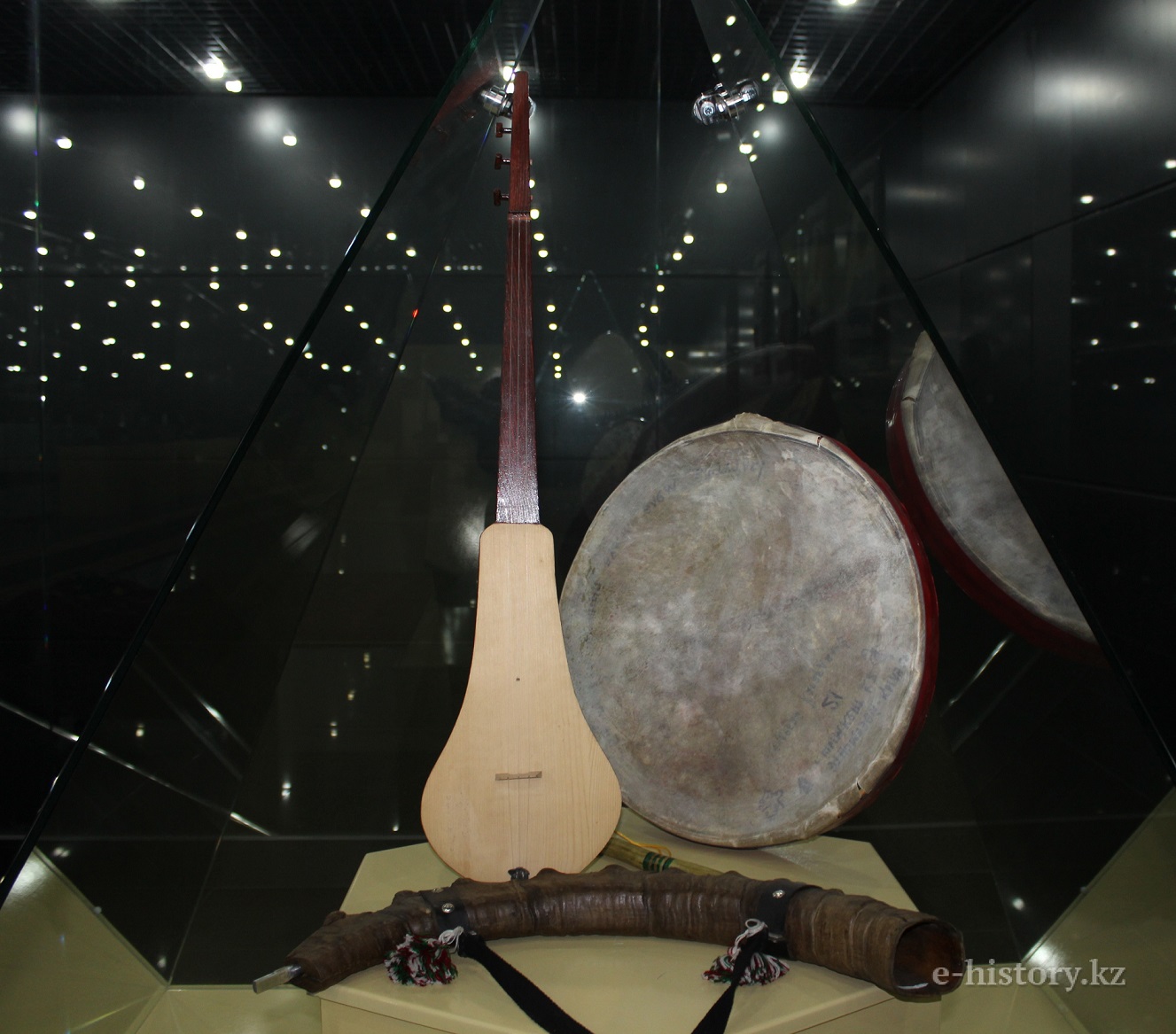 This trichord musical instrument that looks very similar to a pear. Yrshi (musician-improviser), who under it accompaniment performed their yr (epics), played on komus

These wooden chests and patchwork blanket decorated home of the Turkic peoples for hundreds of years.

12. Syrnay and pipe, made from the horn of an ox