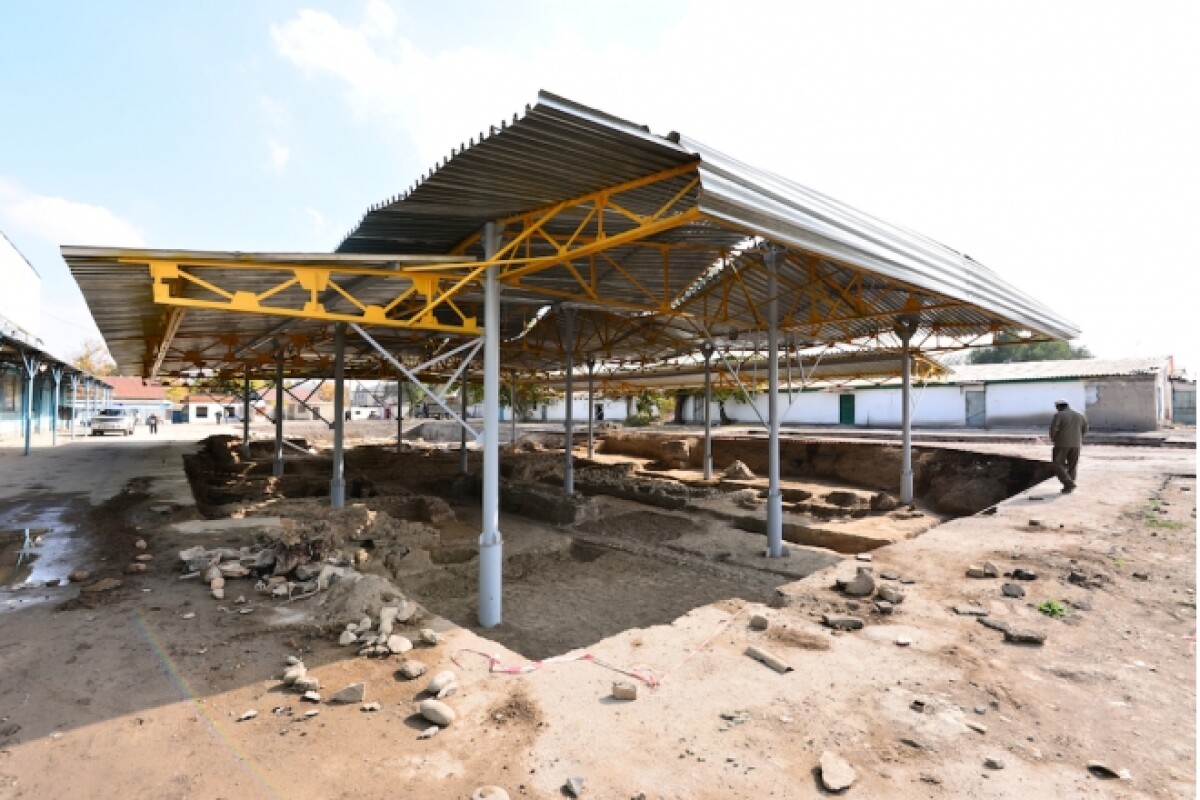 Staff of reserve-museum «Monuments of Ancient Taraz» for the first time told about the latest archaeological findings discovered during the excavations of ancient Taraz.

On July 22, 2014, during the First interregional meeting of UNESCO’s National Commissions, five historical monuments of Zhambyl region were included in the UNESCO World Heritage List. Employee of reserve-museum «Monuments of Ancient Taraz» Anna Prokasheva told about latest unique findings of ancient Taraz, especially imported in Astana for the exhibition that organized at the meeting.

«Taraz is one of the ancient cities of Kazakhstan which locates on the Silk Road. The city is more than 2000 years, and the last three years it had been held the extensive archeological researches. We brought the exposure of findings, which have not yet been exhibited in any other museum of Kazakhstan, this pottery was found during excavations of Taraz settlement.

Archaeological studies of ancient Taraz began in 30s of last century, but until 2011 they all finished with the fact that after research they were covered with ground. Therefore, on the territory of the ancient city located a central city market. Today the market is taken out of the city, and on the ruins of the settlement the Archaeological Park „Ancient Taraz“ was created.

The central part of the ancient city, where Eastern Hammam bath of 11th -12th centuries located, was already found. It was built of burnt bricks. It has warm underfloor heating, plumbing and drainage. The walls inside of buildings were decorated by frescoes with image of octagonal star. Such star there is on Aisha Bibi mausoleum, it can be seen in Taraz ceramics. It also has been used in Sogdian and Iranian architects. Thus, it represents a kind of dialogue of cultures that had been occurred on the Great Silk Road» — says Anna Prokasheva. 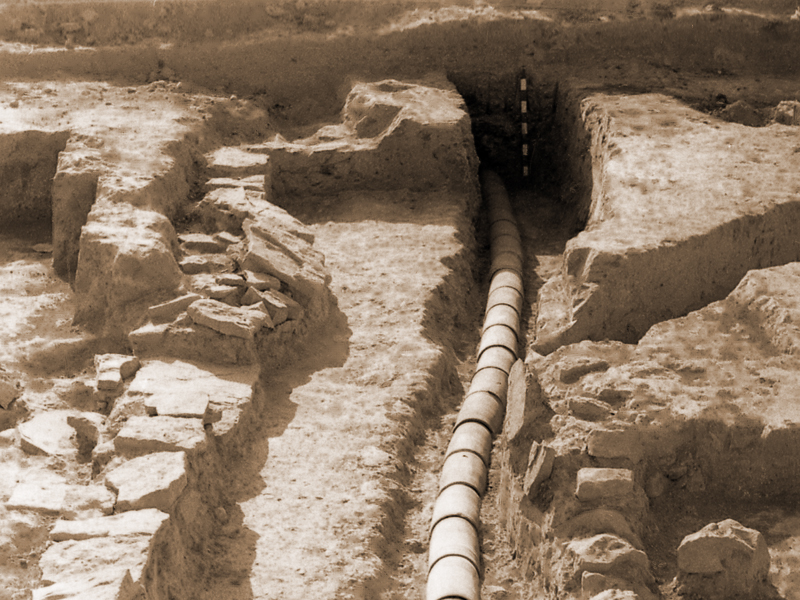 Thanks to the excavations the location of ancient Taraz was determined. In what part of the modern city it has been appeared?

«Ruins of ancient city were found near the Central City area. Once this area was periphery of ancient Taraz. The ancient city is located close to the Talas River. Water irrigation systems stretched from the river. Today, excavations were carried out exactly in the heart of the ancient city, its area was 10 hectares. The ancient city laid on the crossroads of caravan routes, in 40 km away around it there are satellite-cities of Taraz, according to the archaeologists there are 30 of them. It is surrounded by the watch towers and fortifications, which used to serve to defense Taraz.

Unique fortification Akyrtas gives a great interest to science. Cities in the ancient time were built of clay, raw and burnt bricks, where Akyrtas was built using the stones of different sizes.
Construction was carried out in the 8th century, but it was not finished. And unfortunately, there is no information by whom it was conducted. Akyrtas has been studied for over 150 years, but so far the researchers have more questions than answers. 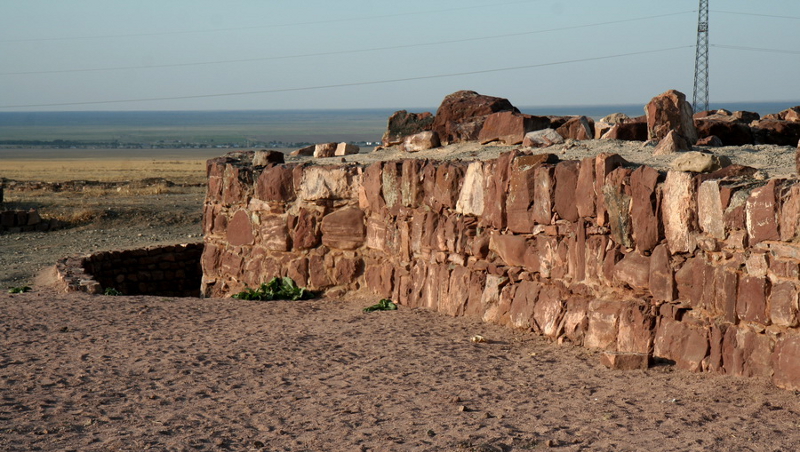 Akyrtas is the mystery that has not been fully unveiled

Unfinished Akyrtas laid ruined before the arrival of scientists who are actively involved in it research. The construction has a very solid foundation and wide walls. The layout of Akyrtas is similar to the construction of Arab caliphs, where there is a correlation with the Arabs who came to Central Asia and spread Islam. In 751, the battle between the Chinese and the Arabs was on the Talas River. The Chinese were defeated. Arabs after they won this fight, began to spread Islam. This event most likely has been associated with the construction of Akyrtas: Arab architects built a residence for local Turkic rulers. Written records did not survived, but the city itself is preserved.

Nevertheless, there are mentions of the ancient fortress called «the ruins of red rocks», which were the Silk Road. Akyrtas and four ancient cities in Zhambyl were included in UNESCO World Heritage List».
How will impact on historical monuments the inclusion of them in the World Heritage List?

«Firstly, it will provide an opportunity to conduct more thorough research, which will involve international experts, inclusion into the World Heritage List will also give impetus to the development of internal and external tourism. We have a lot of interesting historical sites that are not visited by people because of the lack of tourism infrastructure. Now the state will work to ensure that it represent their ancient medieval monuments at the international level».

Please, tell us about the archaeological findings that you brought to the exhibition, dedicated to the UNESCO meeting.

«This medieval jug was found near the mosque of ancient Taraz. It is the vessel, which was used for religious rites. Dishes were served not only to its use in everyday life, but some of the utensils were used for ritual purposes. In the world religions there is believe that God created man from clay. A potter while making the vessel put his soul on it, showing his world view: clay is the foundation of the life. The found pitcher has anthropomorphic characteristics. Depicted ears, long pigtails which are mustache and beard were represented on it. Thus, the pitcher became the epitome of a man, and the potter who made this pitcher felt himself as God. 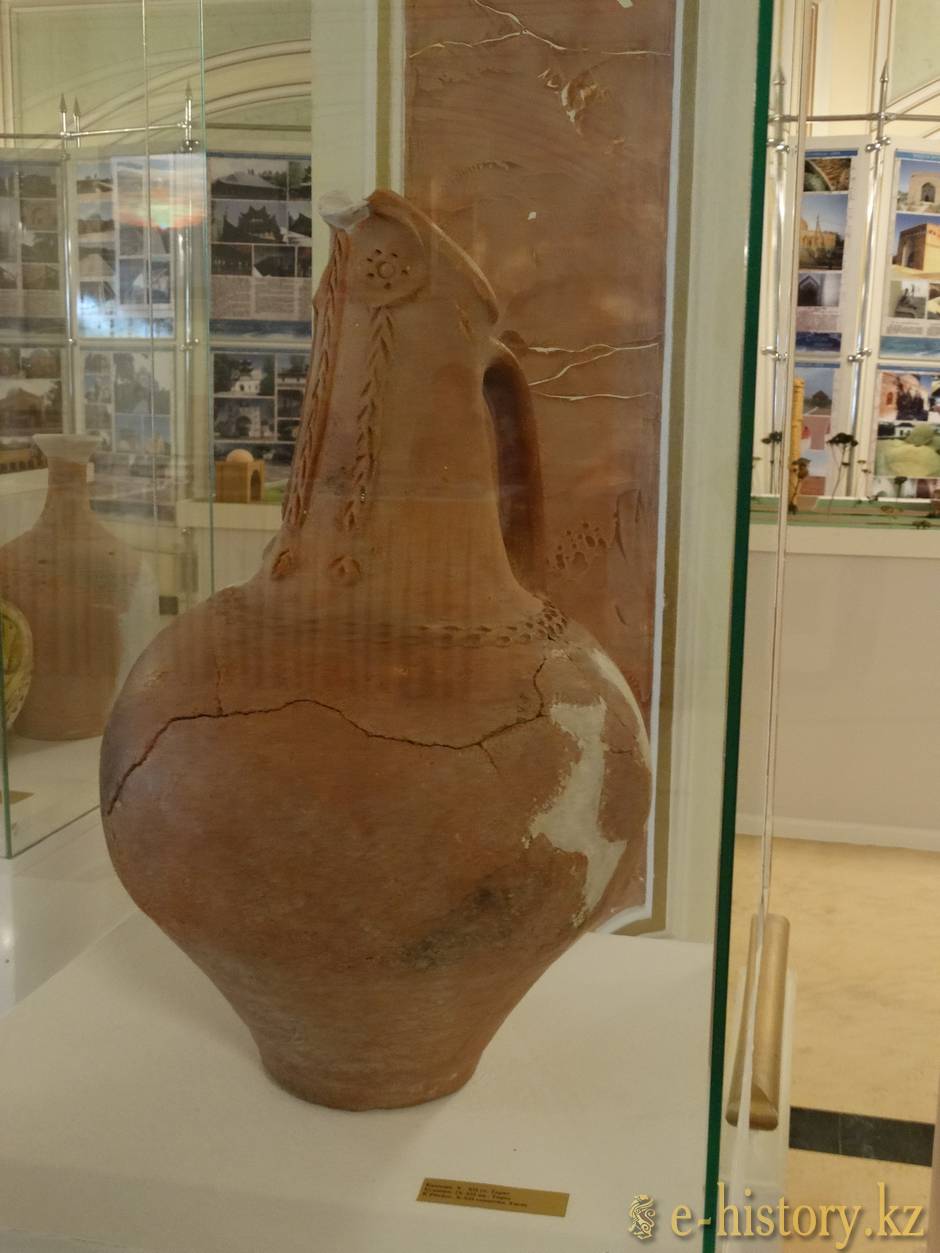 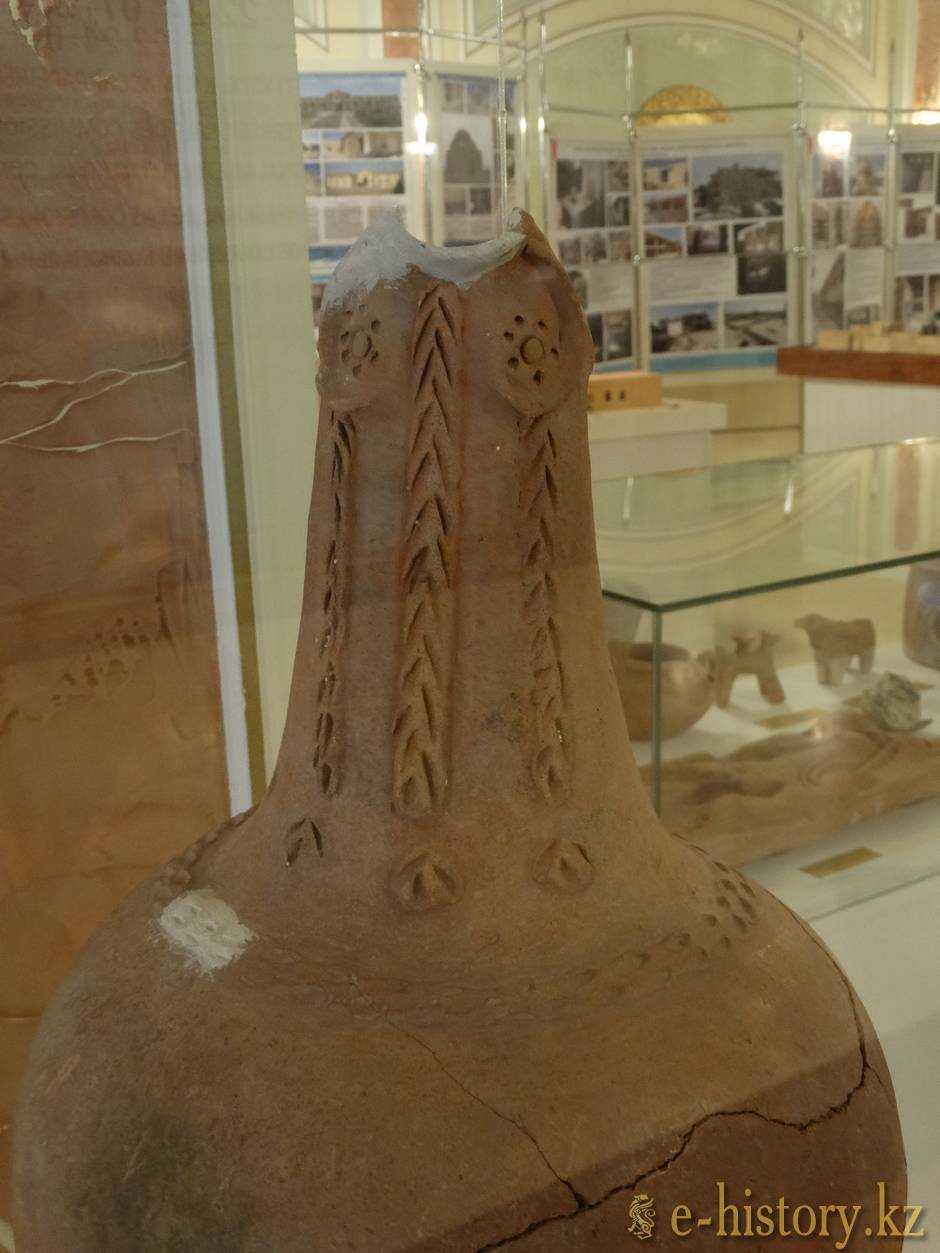 When the pattern was applied on the top of the vessel, it served as a ritual dedicated to alive. Usually the pottery, found in graves, was decorated with pattern on the lower part of the vessel. Each pattern was made not only for decoration, but it had a deep meaning.

On the handle of the pitcher there is a protrusion, which is convenient to hold and put the finger on it to support. Some pitchers have such protrusion and some of them have not got it. Large-sized pitchers are mainly found with protrusion and they are called «male». 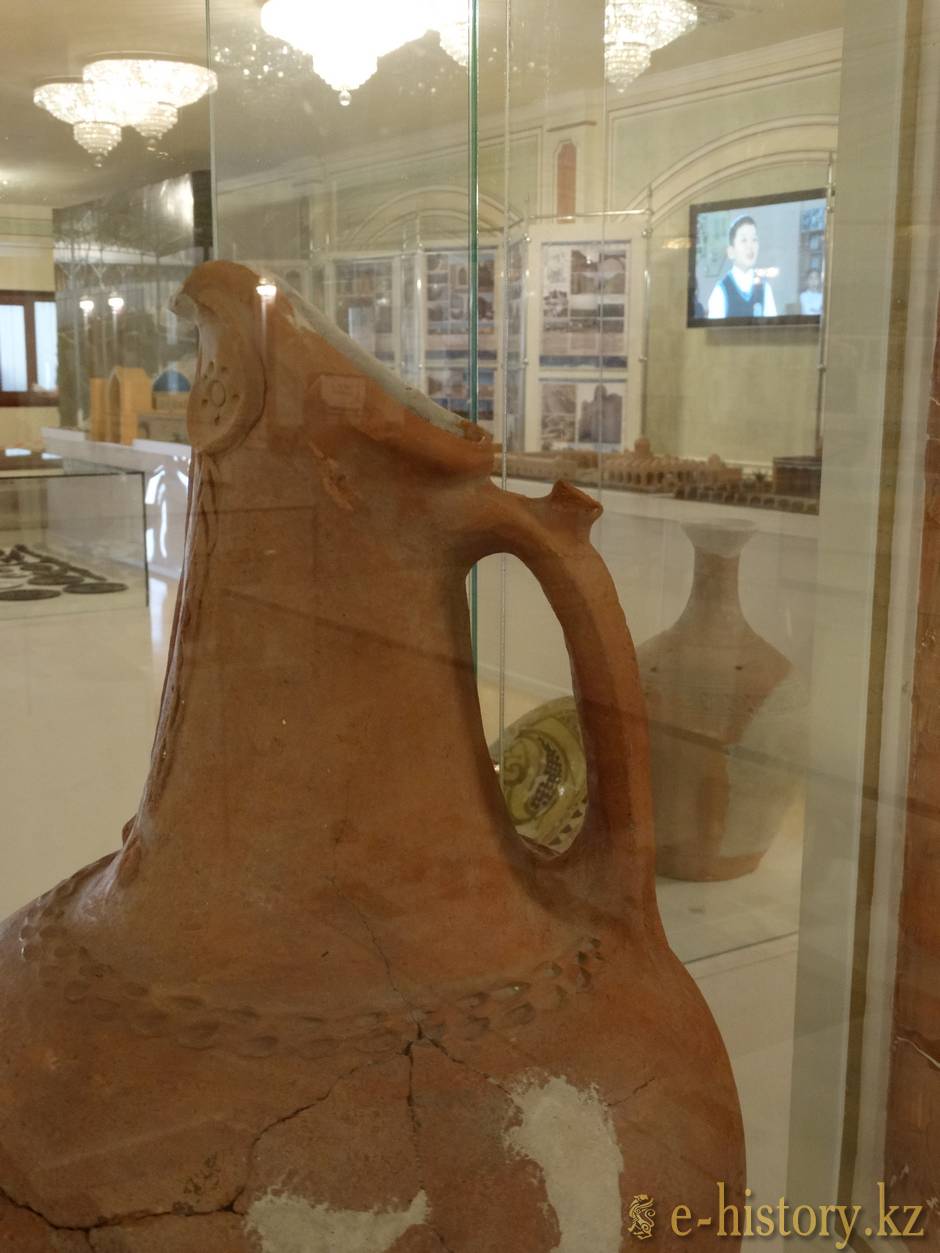 Talas ceramics have distinctive traits — anthropomorphic features. This pottery can be found only in the Talas valley. Such ceramics produced by Sogdians, but it was at an earlier time, in the 11th-12th centuries, it is appropriate only to Talas valley.

11th-12th centuries are known in history as the period of reign of Karakhanids. At that time in Taraz there was not only the rise of the craft, but the city itself became one of the capitals of Karakhanids. In Taraz on behalf of the local ruler coins were minted and mausoleums were constructed.

Conflicts began when at the end of the 12th century the dynasty of Karakhanids was degraded. Neighboring countries started to conquer the territory of Karakhanids and Genghis Khan came to power. And Taraz lost its status. It remained on the historical stage, but from big city it turned into a small farming village. Over the time, it lost even its name. By the 15th century the name Taraz disappeared from the written sources. Degradation of the city is related with the termination of trade on the Silk Road. 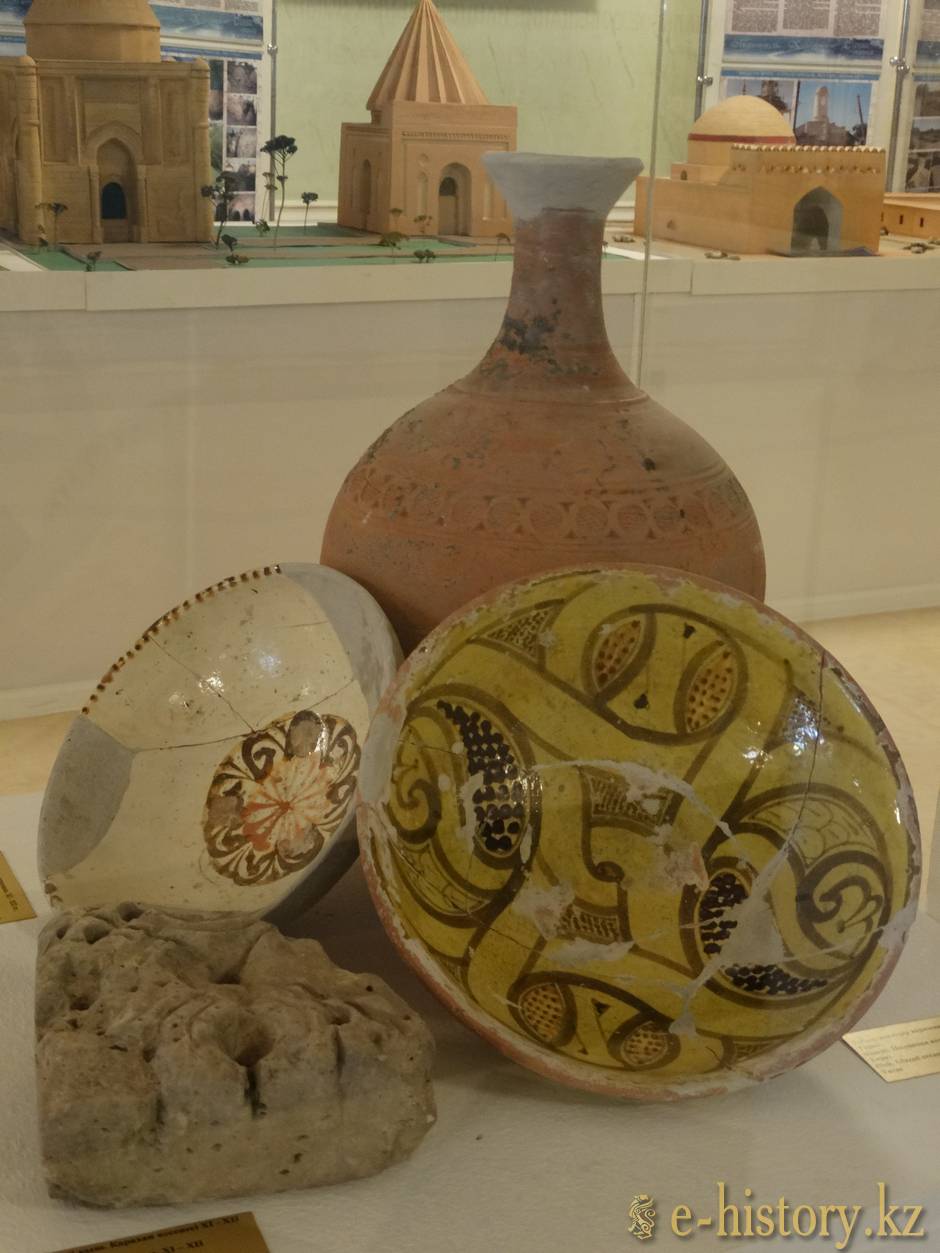 The brick from the wall of Karakhan’s mausoleum. Ceramic pitcher for wine

This is the front brick of Karahan’s mausoleum. Mausoleum devoted to one of the rulers of the dynasty was built in Taraz. At the beginning of the 20th century, the mausoleum was rebuilt as its walls were destroyed. The mausoleum was built on the same foundation, i.e. its layout was preserved, and front part of the building was changed. So far archaeologists have discovered only this brick.

Wine was produced in Talas valley, and many travelers wrote that while visiting Taraz they drank very tasty wine. Most likely, it was poured into such narrow-ceramic jugs with punching pattern. 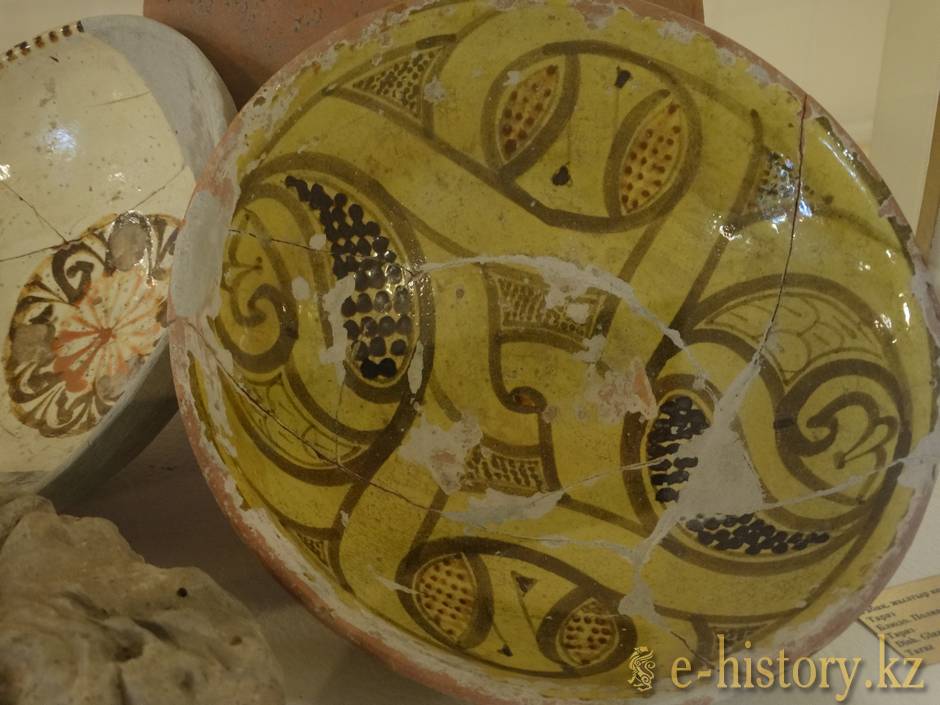 These irrigating dishes are interesting with the fact that exactly Talas ceramics were covered with glaze, which has specific yellow, green and brown colors.

Certainly, archeologist found chopped products at the excavation. More than 33 thousand pieces of ceramic, glass and bone artifacts were found during the three years of archeological work on the site of Taraz. Opening of the archeological park-museum «Ancient Taraz city» is planned in the future.