Home News Other One day with archeologist

One day with archeologist 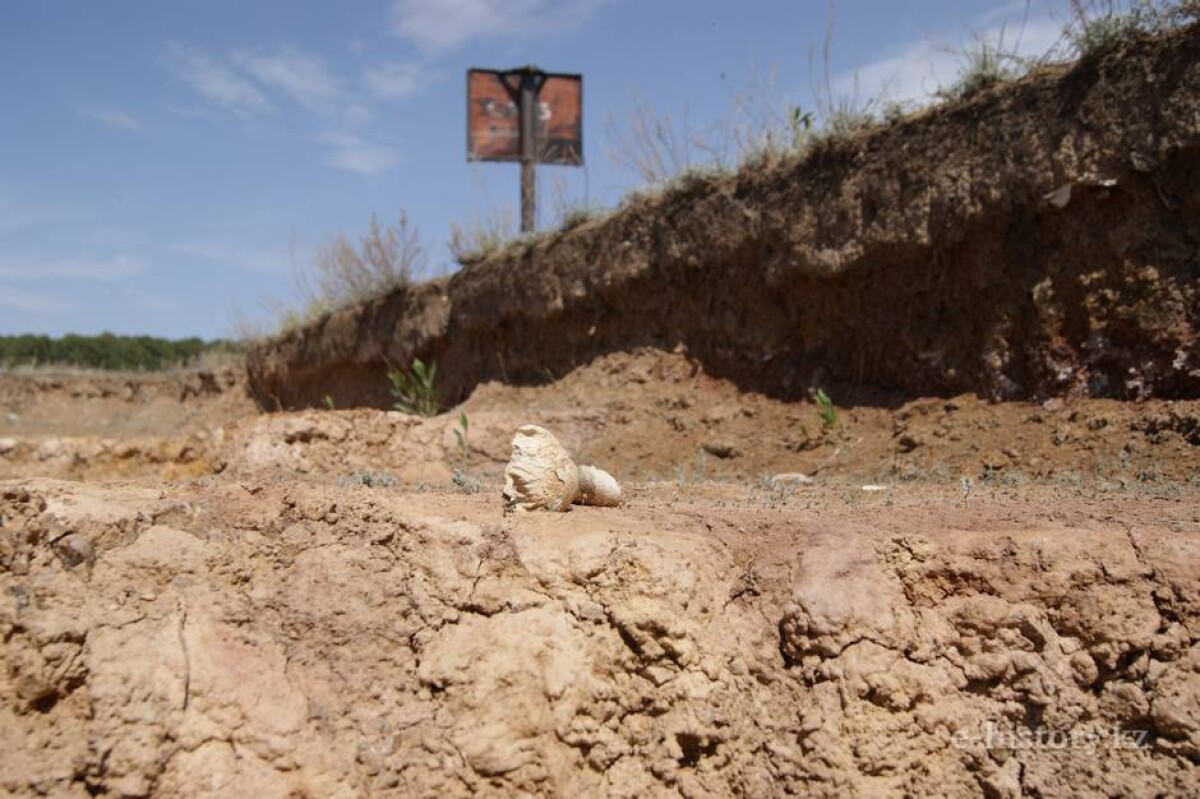 Steppe wind filled with spring grasses, ruffled hair and with every gust of head blows everything superficial, allowing in all colors to represent what the professor says. Heart pounds excitedly, passing through itself centuries-old history of our people and the fate of this remarkable man.

Victor Zaibert, a renowned scholar who has dedicated more than 40 years of archeology. This science only and should be treated — like hot, otherwise it will not reveal the secrets of the past. We are convinced of this, spending one day in May with the archaeologist who discovered Botay culture and proved that on the territory of Kazakhstan was first domesticated the horse.

It all started with our call with the request to give an interview. It turned out that Viktor in Kokshetau and early morning of the next day is going to go on with the test Botay camp before opening season of archaeological excavations. «Come, you will be interested» — invited us to the professor. And we will, without hesitation, go to get acquainted with the history and culture of ancient Botay people.

At 7:00 am we moved on from Kokshetau to Botay. On the way a young archeologist and specialist in ceramics Maria Kachnovskaya joined with us. Several years hand in hand she has worked with Victor. Same as him he spends three months to the site excavation. 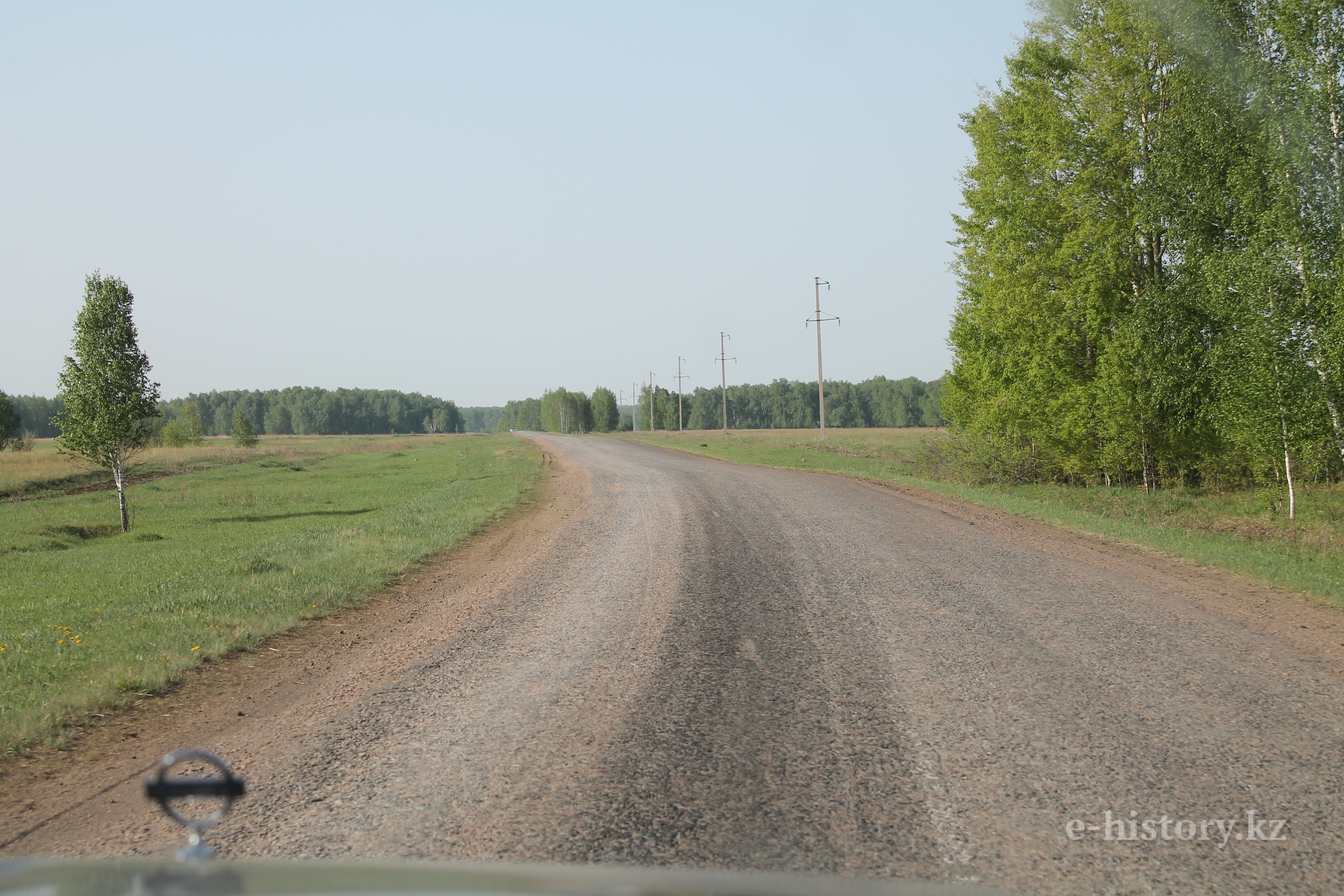 Botay settlement locates near the village Nikolsky, which is 135 km away from the city of Kokshetau. The first place to stop on our way to the bot should have been a lake Chelkar. On it’s the bank there is the house of Botay people created by Zaibert 12 years ago.

We rode crowded foretaste of what we will soon be seen. Outside the window of the car smoothly varied landscape: We looked at that spring steppe, then in unison standing spruce and birch, the small hill. Talked with archaeologist Mary of ceramics that were made Botaya residents, when Victor unexpectedly sharply parked in front of the riders appeared. Shepherds followed close to the herd of horses left nearby. 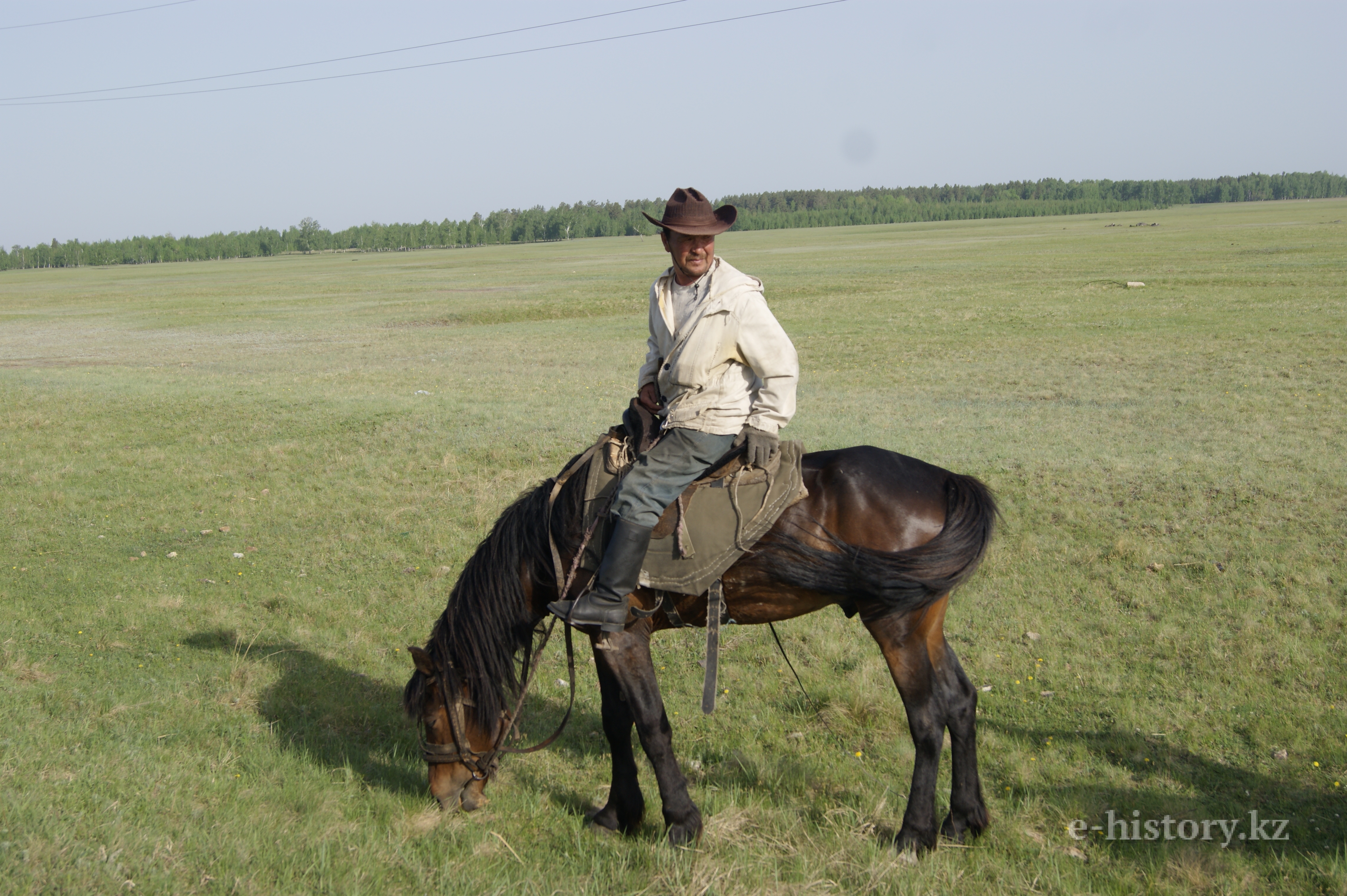 «It is Jabe, multi-breed horse. All the world’s breeds of horses were derived from it», — says the professor.

6000 years ago Botay people for the first time on the plane tamed horse and tasted incomparable taste kumys (horse milk). During the years of excavations at the site of a settlement found tens of thousands of horse bones. On horseback to travel long distances, it is has given such extraordinary powers, worshiped, while its flesh eaten, and its bones were tools and material for construction. «According to our calculations, the people inhabiting these places and disposed up to 360 thousand horses» — says Viktor.

The car turned to the forest. Soon we reached the shore of Lake Chelkar. Before us — the expanse of blue water, merging with the horizon behind — a thick grove of fir trees and birches. And where the forest ends and begins lake, there is house, like a huge beehive, created by Botay people. 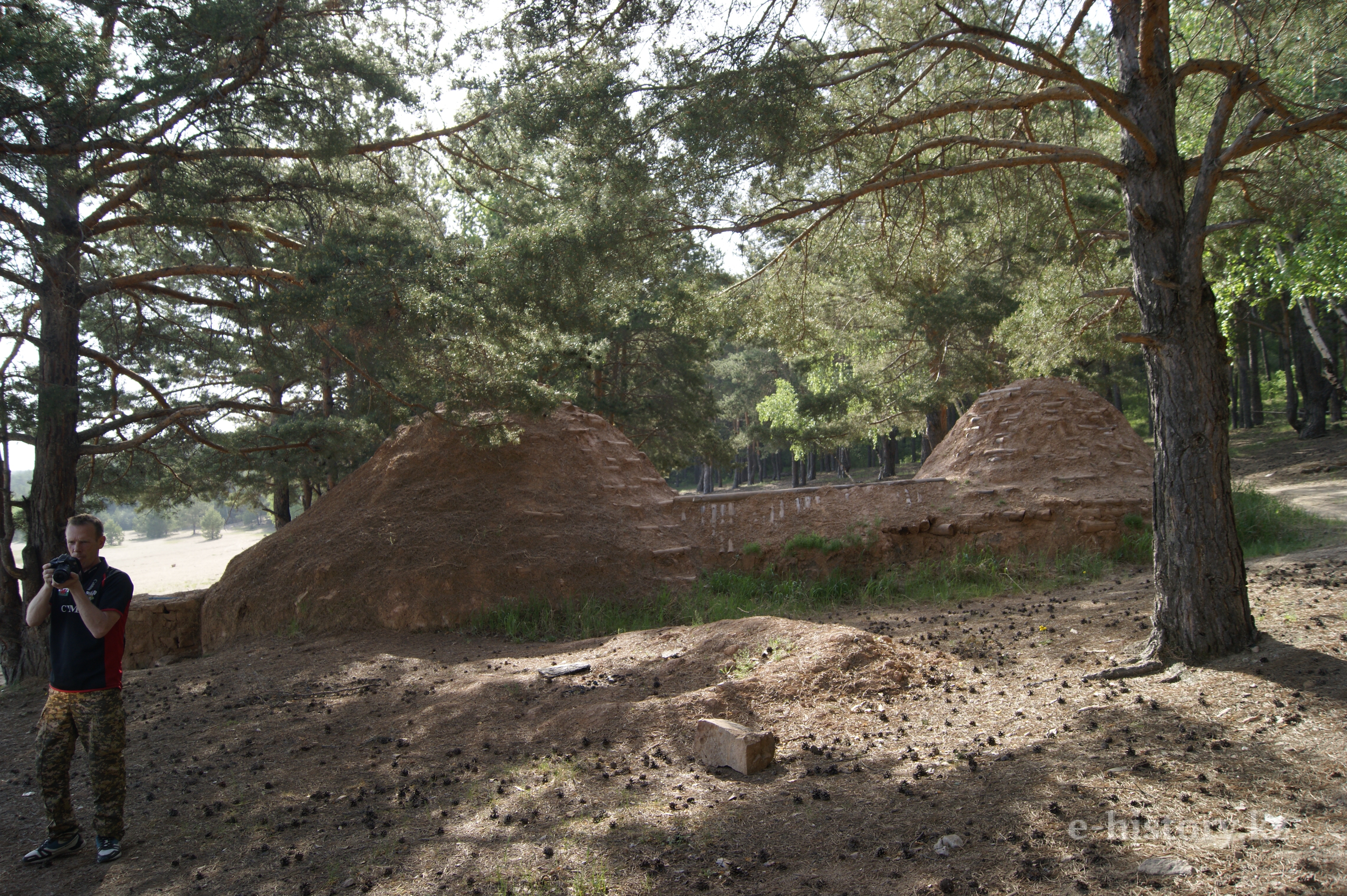 «This is a unique building layout, in Kazakhstan — is the only example of an ancient building housing» — said Viktor. For 12 years visitors have visited this housing. Foreign scientist came to see it. There was a time when Victor some time even lived in it, to confirm the correctness of one or another of its scientific hypotheses. 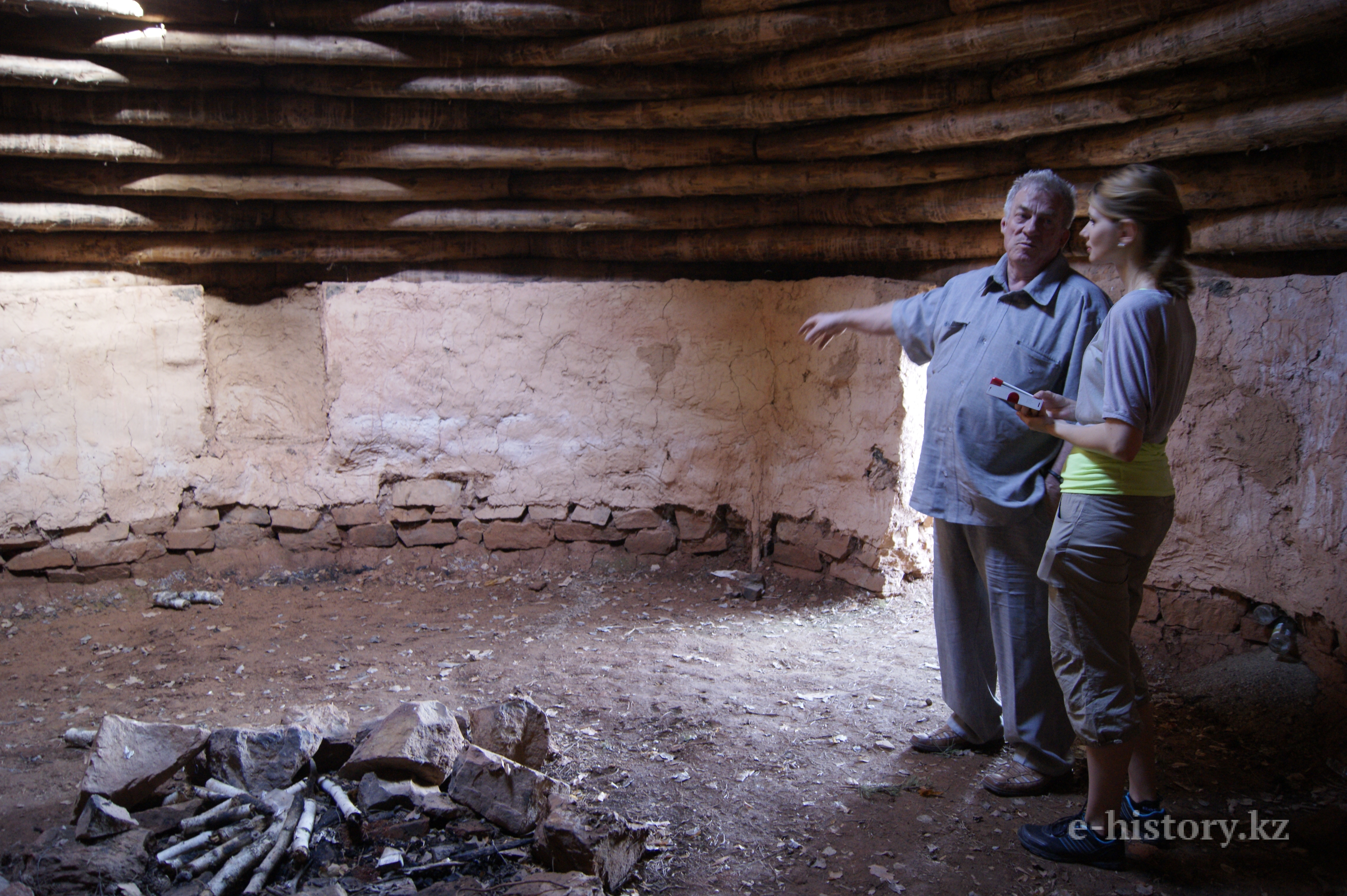 Before you come to the final construction was done painstaking experimental work.

Before you come to the final construction was done painstaking experimental work. Structure was made without a single nail. Huge logs seem like intertwine. The correctness of design was confirmed time. Victor explains fortress dwellings that severity is evenly distributed throughout the structure, and not concentrated in the center, such as in the Russian blockhouse.

At the top home there is a hole that resembles shanyrak of yurt. 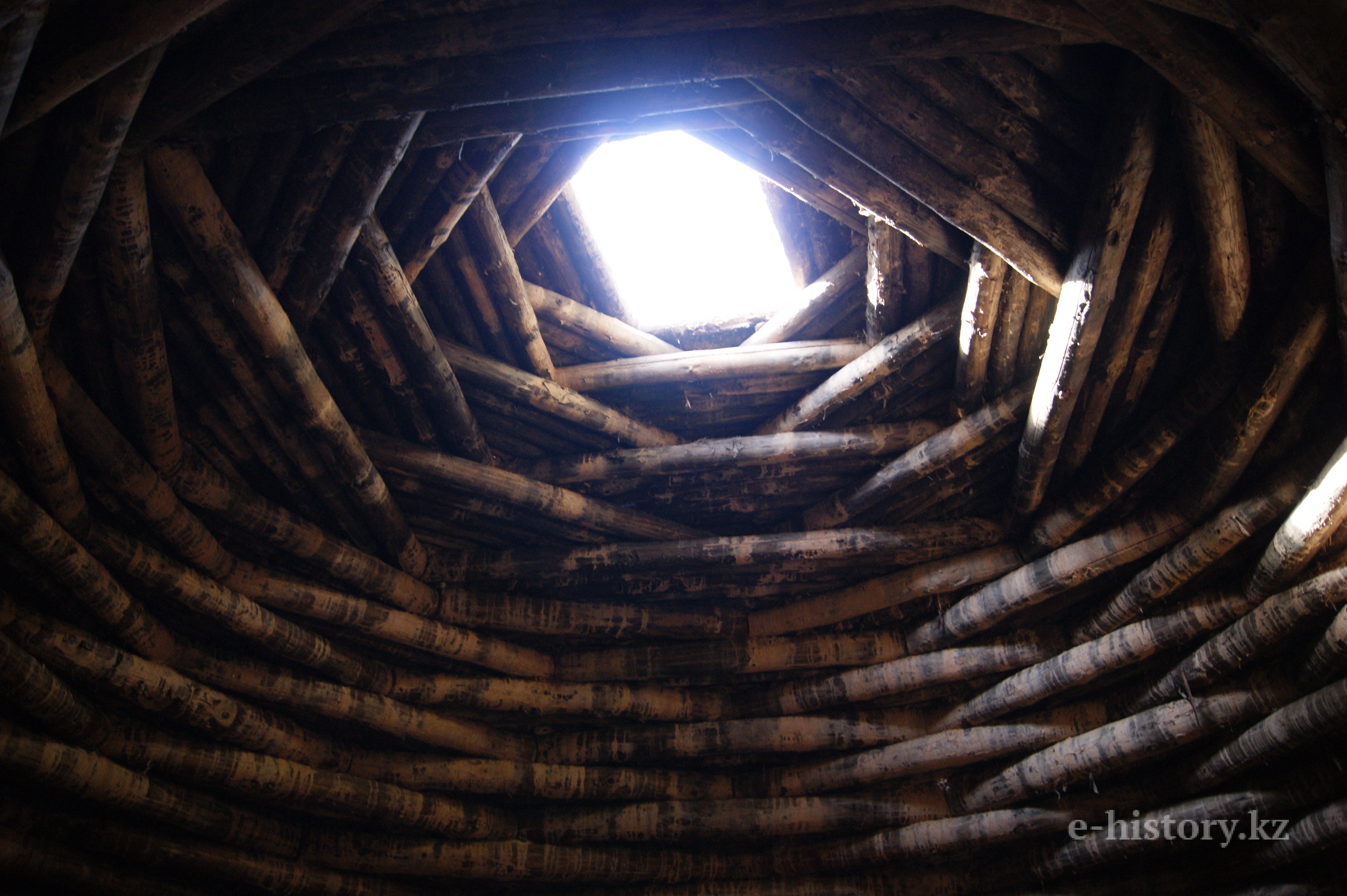 In the center of the home, certainly, there is a hearth. In addition Botay 6000 years ago learned to keep warm by inventing the prototype of the tandoor. At night they covered fire clay «cap» without a bottom, thereby also protecting from fire. Within the walls of the home there are many holes — niche, where people kept meat and milk. Professor claims that the products remain fresh for a long time, the structure had thermal balance.

When a young family was formed, it was allocate with its own near the central hearth. “We have found up to four lesions in one dwelling”, - said Viktor. In other word, in a large house could live several families who gradually resettled in side dwellings built on the principle of cells. 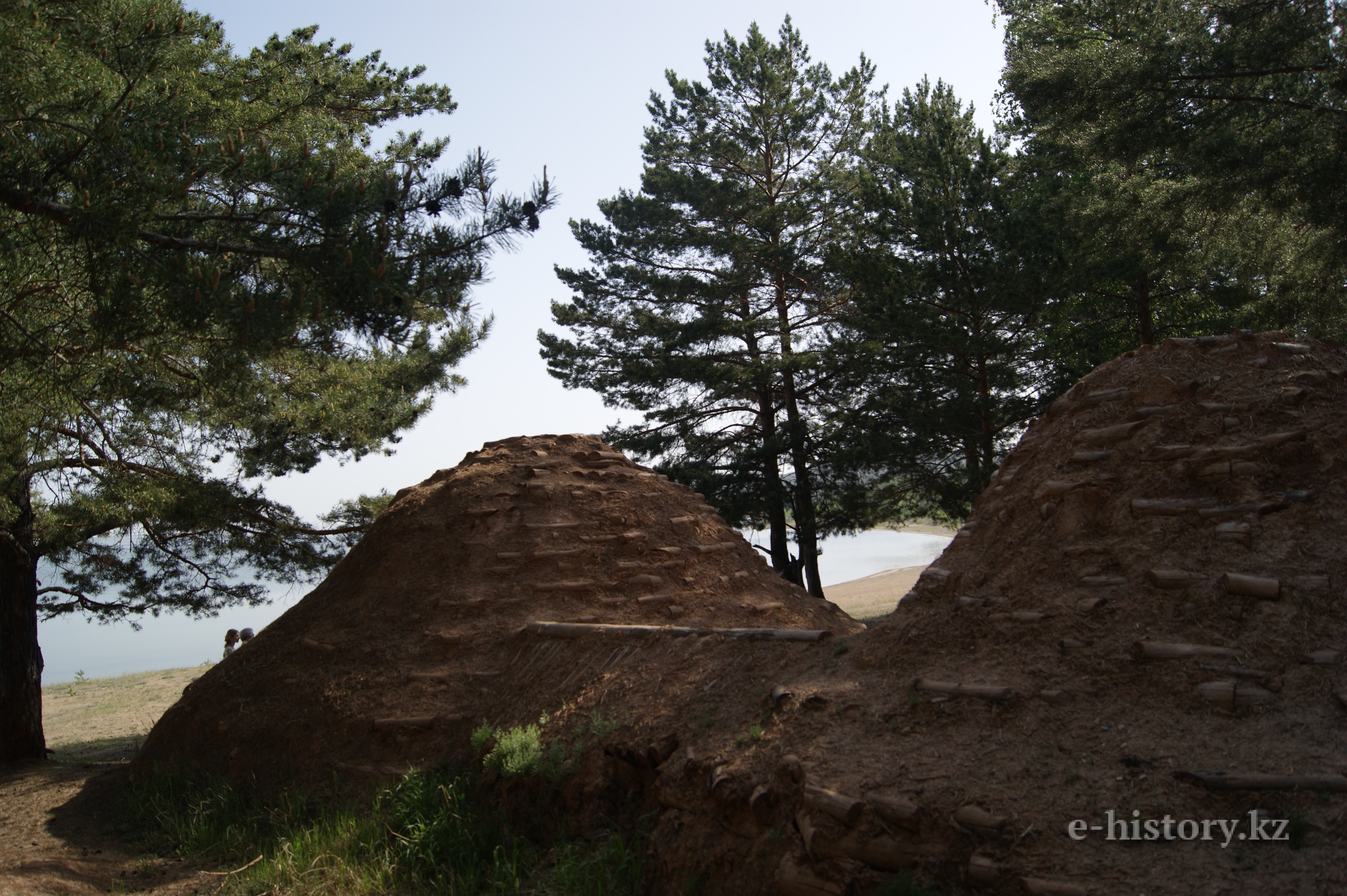 «At this point, where we now stand, planned to create ethnographic map: from the Neolithic to the present day — talks about his plans scientist. We wanted to recreate crafts, everyday life. Tourists would go from one home to another. They would see how people lived in the Neolithic as lived Botay horse breeding nomads and others. They were able to touch the pottery, make the tip for arrow and more». 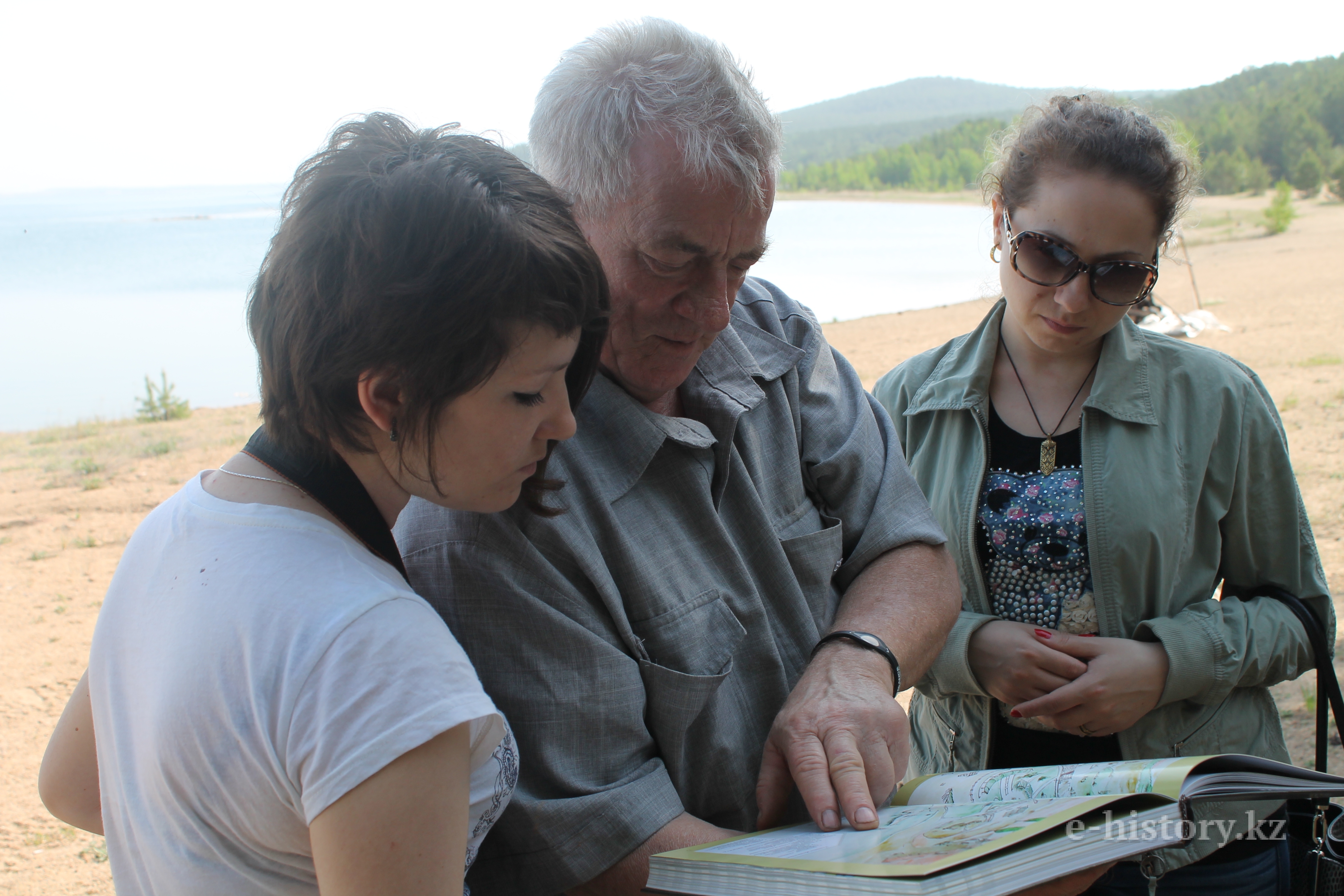 On the photography archeologists Victor Zaibert and Maria Kochanovskaya (right)

Thus, there was a very cognitive rest. «We have repeatedly presented the project leadership officials. We have other historical and tourist projects, but so far it is all useless. We never yet did not speak to reporters about the problems: Lack of support and interest from the government», — says Viktor. 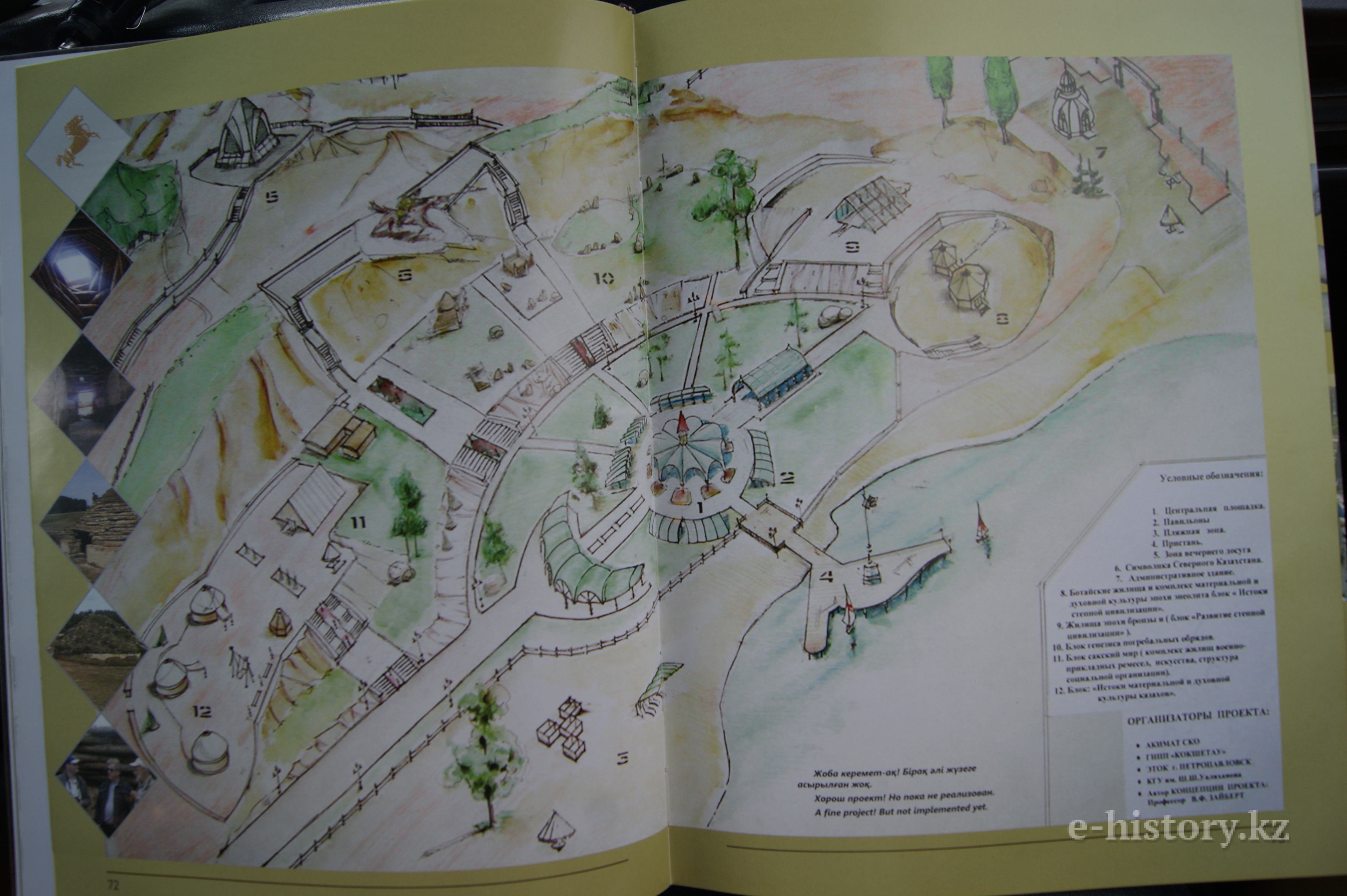 Farewell with the blessed place to relax and hit the road. We’re getting closer to the Botay. However, along the way Professor makes a few more stops. 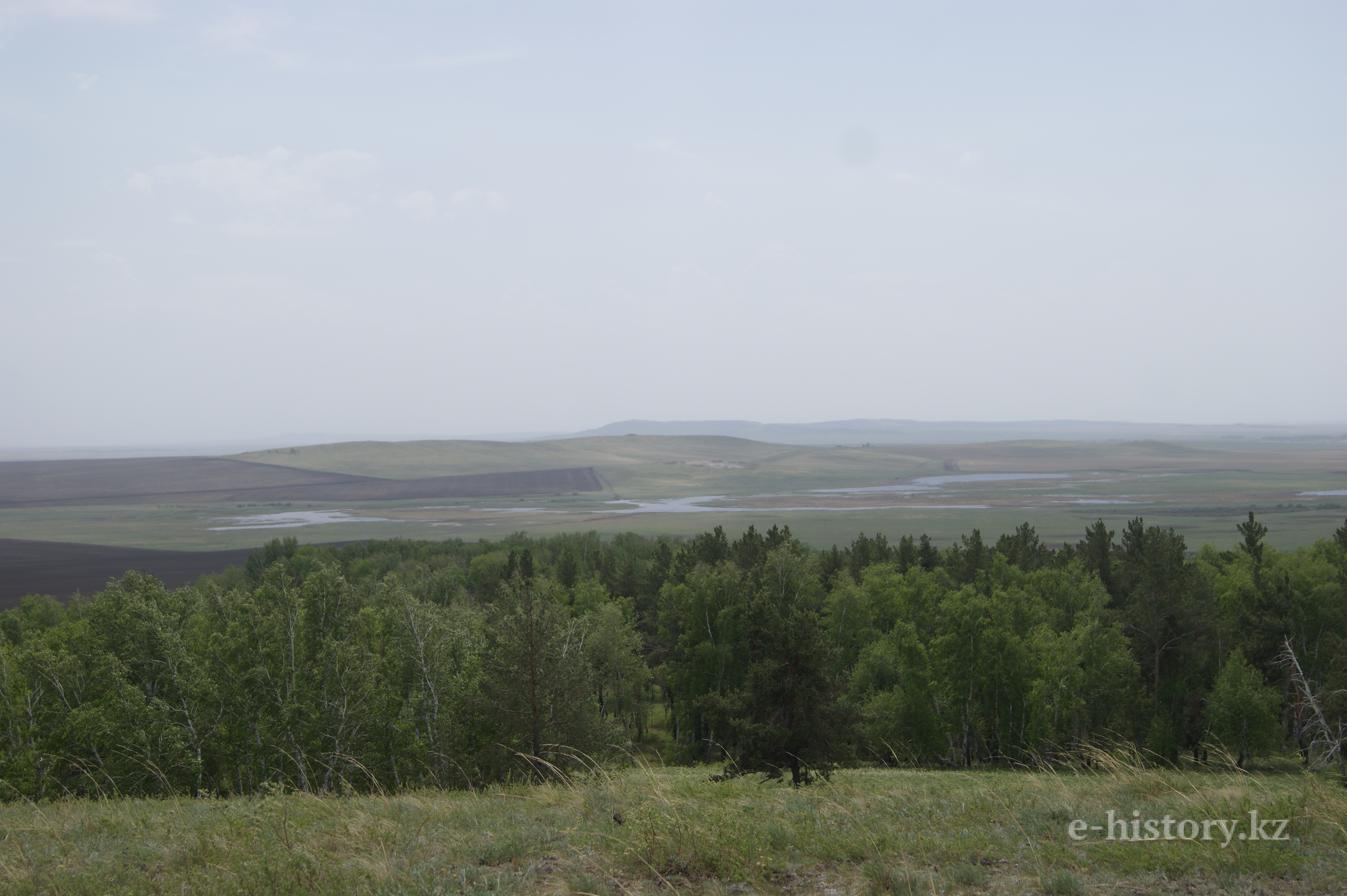 This view is from the hill. Botay people were farsighted people, choosing a good place to stay. Here and in the forest for hunting and gathering, and a desert for breeding horses, and the river for fishing and crafts.

While we admired the scenery, brimming indescribably fresh air beneath our feet was history. Here on the hill, we saw about five graves. This Turkic burial, as explained by the scientist. Framed stones, they are oval in shape and are well visible in the grass. 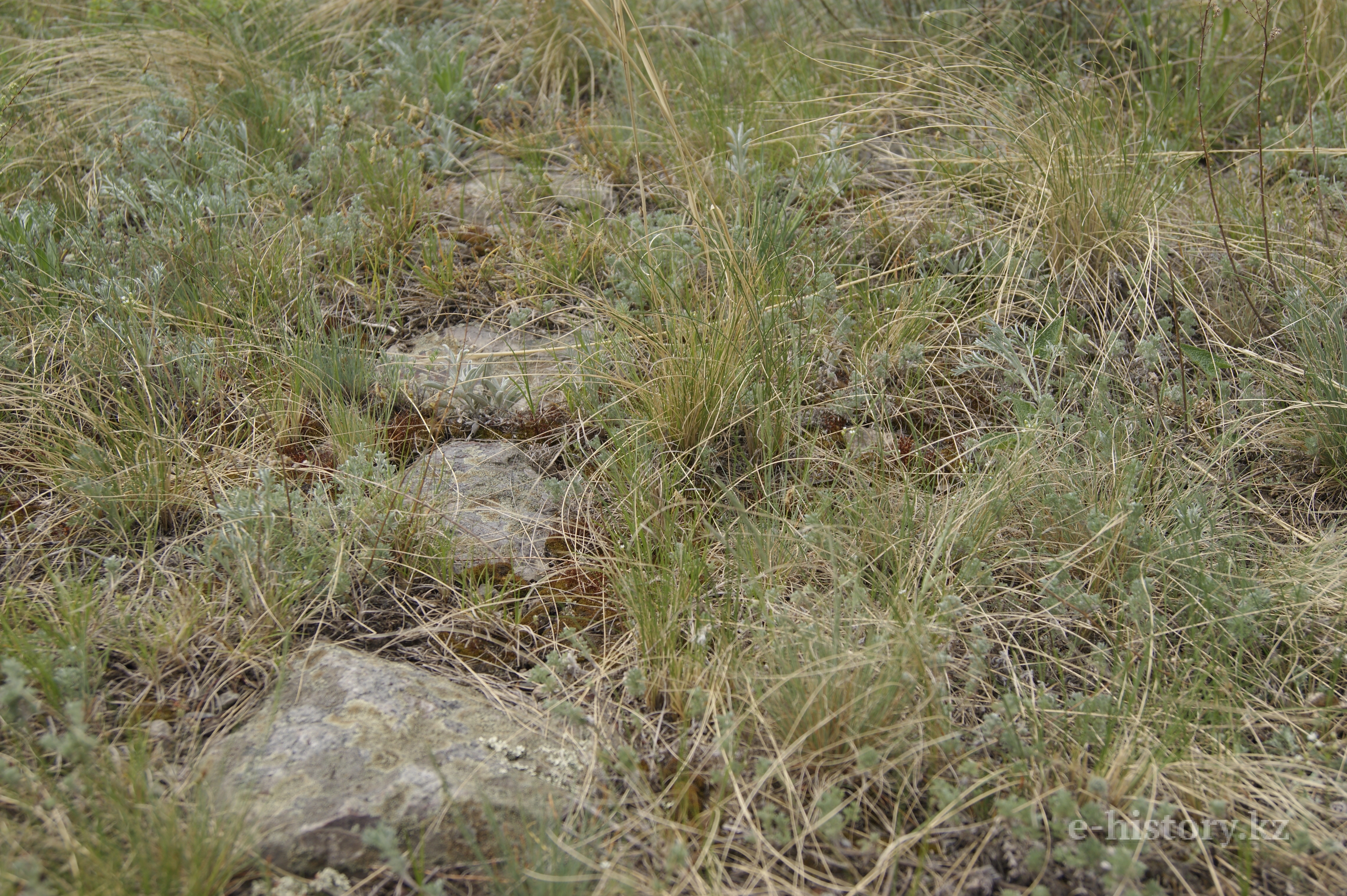 After passing the forest in which the archaeologist Viktor spent literally 30 years, every summer conducting excavations, we finally reached his goal. «Hello, ancient Botay!» 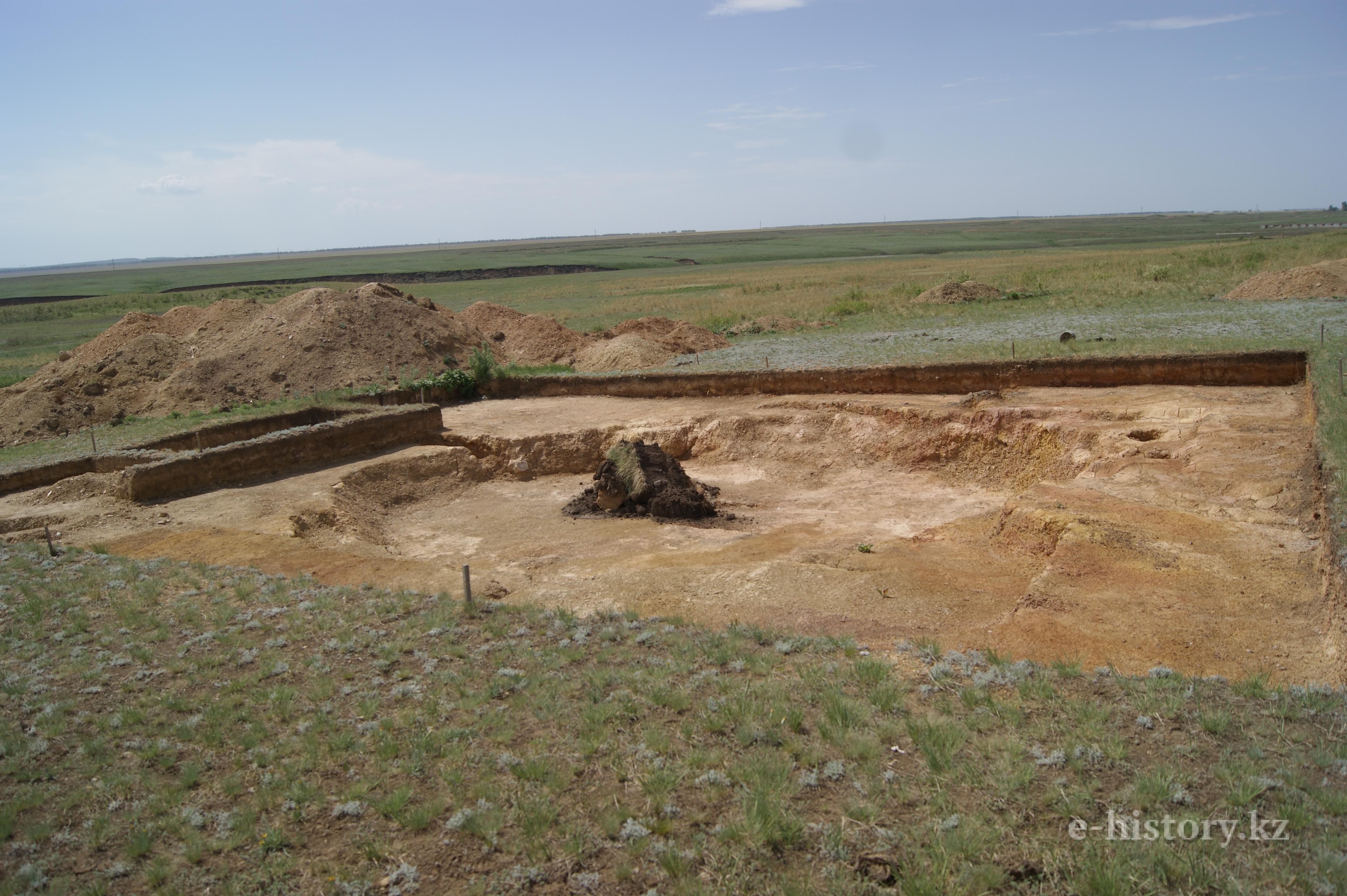 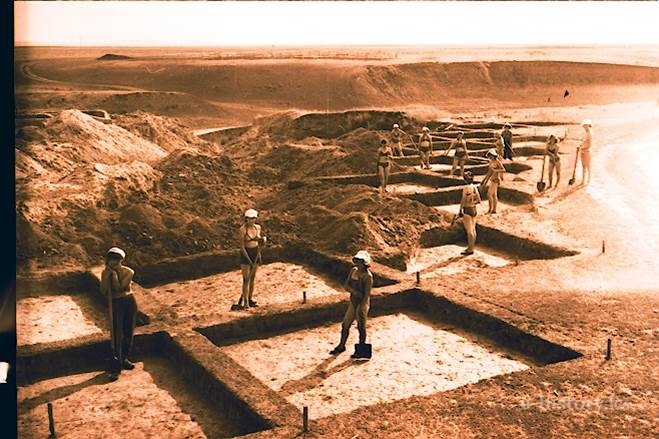 That is how Botay looked a few decades ago.

«So who are Botay people?» We ask Viktor. «The process of cross-breeding started very early. Mediterranean, Mongoloid and equatorial types of races were mixed in Botay. People, who lived in these places, were pastoralists, nomads. But their basic culture was settled. Botay people started to cultivate retreat on dzhailau: flood before they went on the sandy soil. Part of the population left, and some remained. All season young people grazed cattle, made stocks on dzhailau. In autumn together with their wives came back». 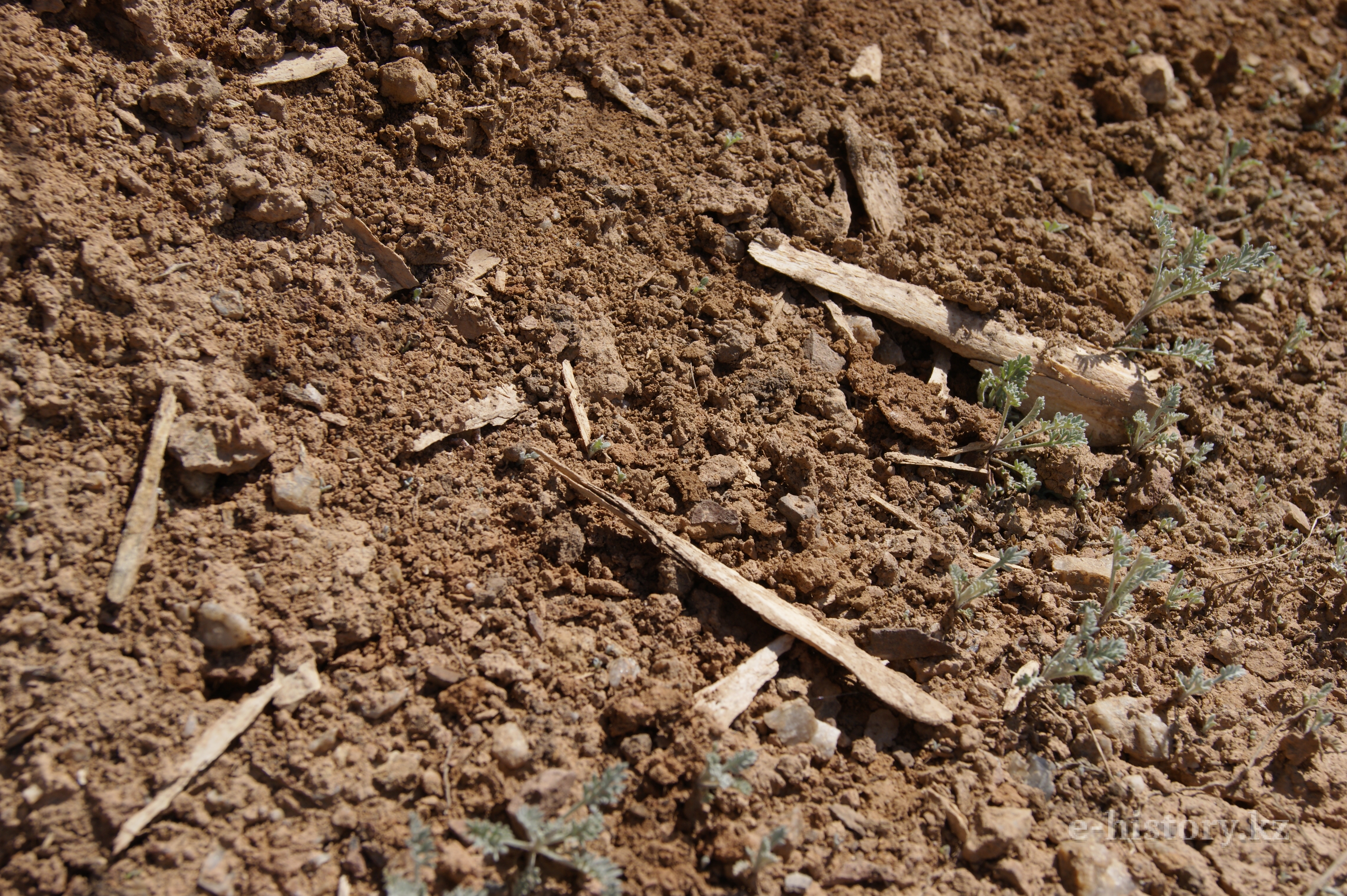 Feel like an archaeologist, you can without a shovel. Lots of material is a bone horses, granite, mica, remains on the surface. 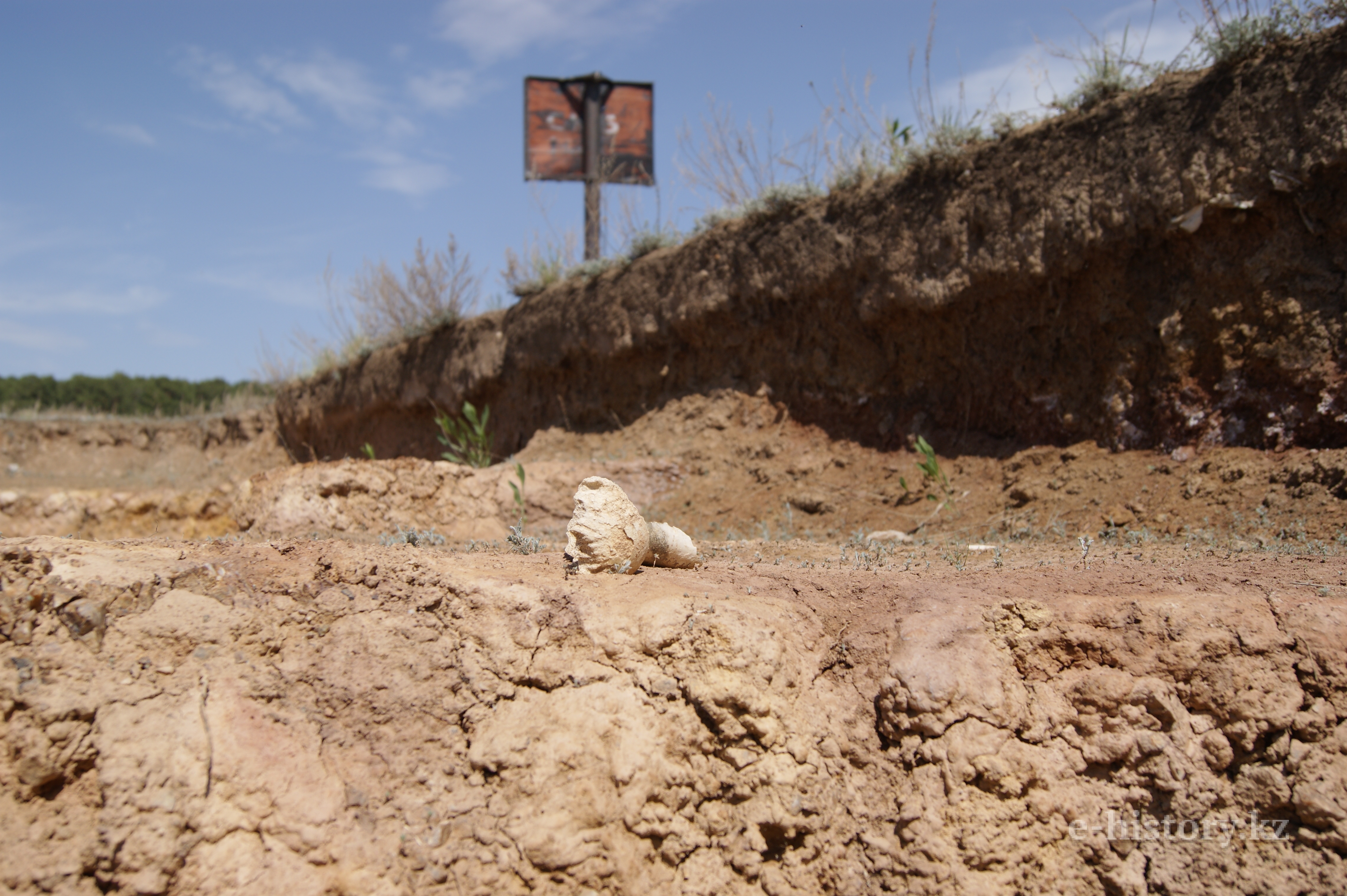 «Zero point». Each excavation begins with alignment on it. «It is believed that this place and went Botay culture» — initiates us into the kitchen archaeological associate professor Valery Shulga. 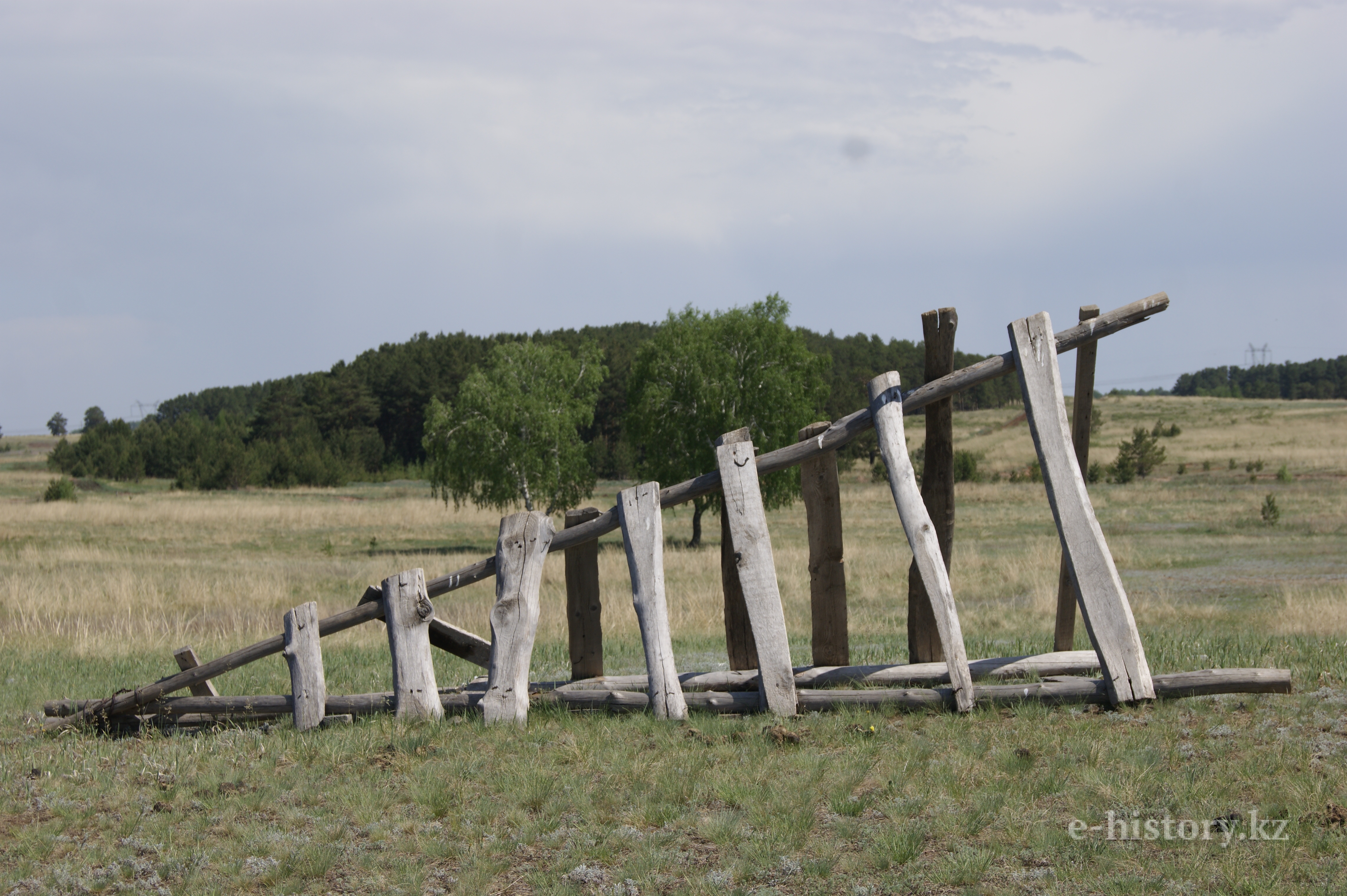 This wooden pyramid used by archaeologists to observe and take photograph from above.

Botay settlement is near Kokshetau — not unique. Identical and cultural monuments found under Atbasar, and Tobol, which means that over 600 years of existence Botay culture was enriched and extended. Here, in the Kokchetau steppes, the largest park — about 168 dwellings. Scientists in the UK conducted electromagnetic shooting throughout. The images we saw that the entire area has been adapted for special construction. We found a workshop for kumys (horse milk), workshops, corrals for horses — all this is closer to the water. Separately, apart from commercial buildings were people’s homes.

Day is rapidly coming to an end. There are many thing remained unheard for us and for Victor not fully known. The archeologist has a whole season of excavation, perhaps, may be able to find a few missing pieces in a puzzle of bright rich history of Botay people. Professor promised us to report the news from the excavation, and we in our turn come back again.