Home News Other Test for nation. History lessons should be learned

Test for nation. History lessons should be learned 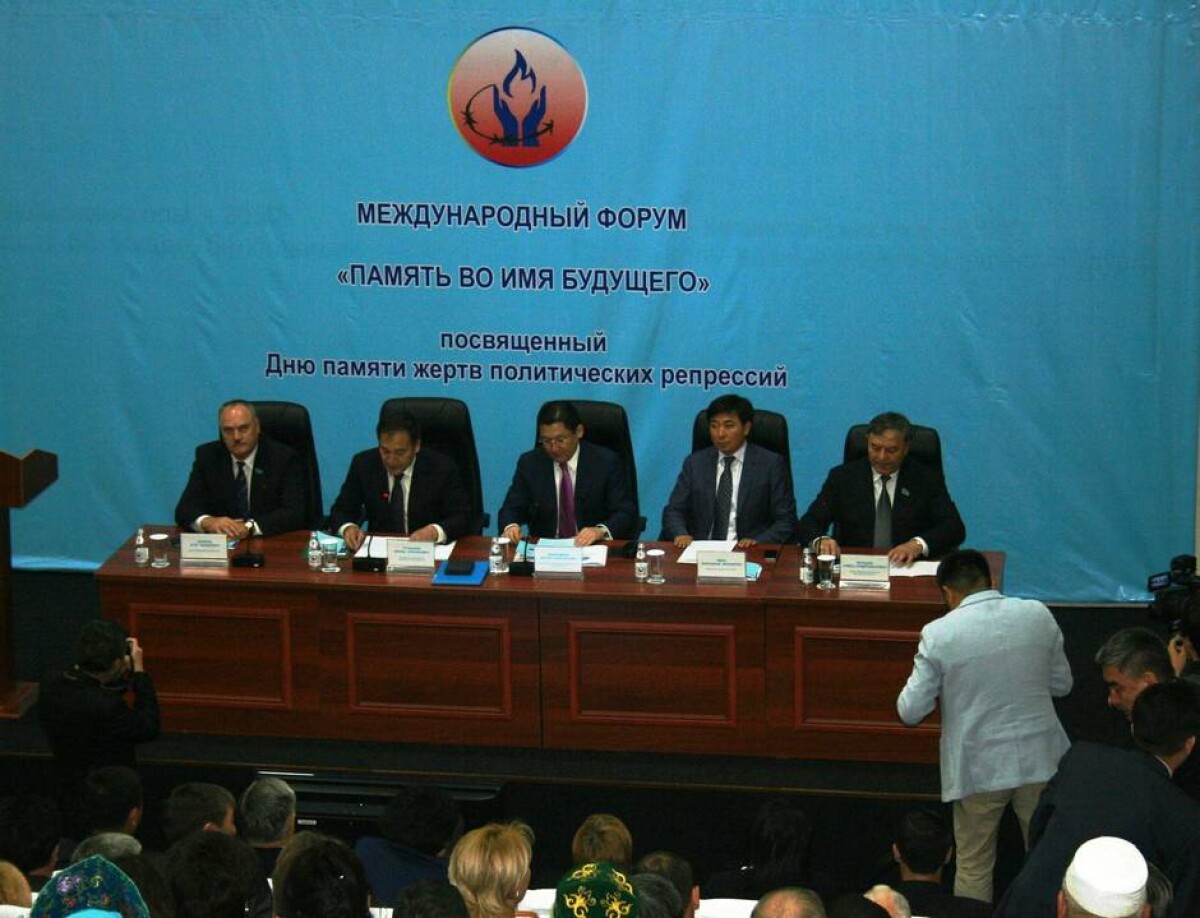 May 29–30, 2014 on the eve of the Day Remembrance of the Victims of Political Repression in Semey in the international project of the Assembly of People of Kazakhstan «Memory of the future» was a presentation of the documentary film «Sonbesin ot alauy» (original name in Kazakh language «Сөнбесін от алауы»).

Also at the educational institutions and the workforce of the city were organized the «lessons of history». At the State University named after Shakarim was organized scientific-practical conference «Modern interpretation of the Alash phenomenon: the lessons of history and integrate concepts». Members and guest in the lobby of the university can visit the exhibition prepared by the staff of the Documentation Center of the modern history of the East Kazakhstan region. At the exhibition were presented as fiction as well as authentic archival files, copies of documents on banners and in electronic format. In all central and regional mosques, Orthodox churches and Catholic parishes were held a memorial services. Representatives of all these faiths also attended funeral dinner in Semey. At the end of the forum was organized meeting dedicated to the memory of victims of political repression conducted at the monument of Kayum Mukhamedkhanov and action at the Palace of Art and Youth «To remember…».

The project «Memory for the Future», was originally supported by the President — Chairman of the Assembly of People of Kazakhstan N. Nazarbayev, started in 2010 on the territory of the infamous ALZHIR. The venue of the forum was the Karlag, Ushtobe and «Kasiret». Ii is symbolically that for this year’s event was chosen the city, which was defined in 1917 as the capital of Kazakh autonomy- Semipalatinsk, now Semey, the left bank of which in the same year received the status of an administrative unit and was renamed to the city Alash.

The work of the forum was opened by the Deputy Head of Presidential Administration of the Republic of Kazakhstan (AP RK), Doctor of Laws, B. Mailybayev, who read the message of nation’s leader N. Nazarbayev to the people of Kazakhstan for the Day of Remembrance of Victims of Political Repression.
B. Saparbayev, the head of the local executive authority of East part Kazakhstan, turned to participants of the event with greeting speech. 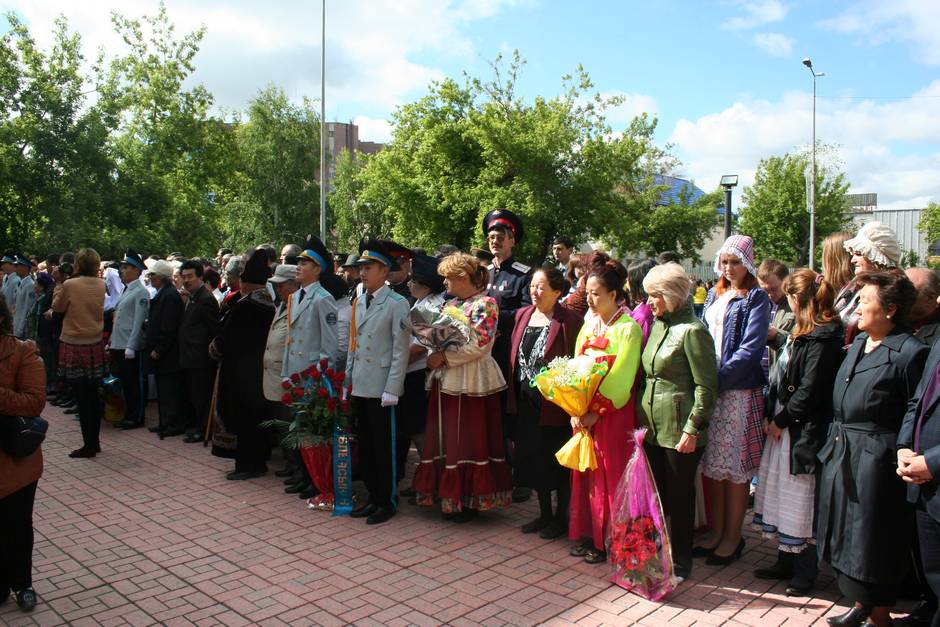 Meeting dedicated to the Day of Remembrance of the Victims of Political Repression, May 31, 2014, Semey.

In Kazakhstan, the members of Alash Horde were the first among those who were repressed. From 1917–1920 they fought for the creation of state autonomy, proclaimed in all-Kazakh Congress on December 5–13, 1917. It was not accidental that the Assembly of People of Kazakhstan addressed to the history of the government of Alash Horde. The Assembly is impressed that members of Alash Horde, primarily expressing the interests of the Kazakh people, never sought to create «mono-national state». Alikhan Bukeykhanov, elected on December Congress (1917) of the Prime Minister, raised the question on obtaining the consent of the Kazakh population to announce national autonomy and to provide ten of the twenty-five seats in the government of Alash Horde for people of those nationalities who inhabited Kazakhstan along with Kazakhs. Composing team of Administration of the President of Kazakhstan together with the Institute of History and Ethnology named after Sh. Ualikhanov in 2004–2008, dedicated to the activities of the members of Alash Horde the four volumes in five books «Alash movement».

Continuing the themes, the archivists initiated the preparation of a collection of documents on the 120th anniversary of A. Alibekov, the member of the party «Alash», who dedicated his life to the building the state and who was repressed in 1937- during the «Great Terror». The publication was made on the basis Alibekov’s personal fund of documents, passed to Administration of the President on May 2014, by his great grand-daughter Leila Seyfullina, the deputy director of the Kunayev’s International Fund. Certainly that apart from the documents which are published in the bulk for the first time, the interest of researchers of Alash movement would be caused by stories and photos from the family archive.

In April 2014, the members of archive participated in the event dedicated to the 25th anniversary of Kazakhstan historical and educational society «Adilaet», where was presented the work «Asfendiar Kenzhin. Collection of documents and materials» about one of the representative of a community of Kazakh intellectuals, who contributed to the education of the Kazakhs, persistently searched the ways out of the colonial rules, also who put enormous efforts to the creation of the Kazakh Soviet Socialist Autonomous Republic. In 1921–1922 and 1924–1928 he led Enlightenment commissariat, the Workers and Peasant inspection and Trade commissariat. He worked in Kyrgyz Regional Committee RCP (b) (later renamed Kazakh Regional Committee), as the many of his colleagues, went through party verification due to the involvement in Alash movement. Despite that he serve in the Soviet apparatus for almost 20 years, in 1937 in the message to Stalin Kenzhin was mentioned as one of the most prominent members supposedly existed branches of National Fascist organization, affiliated with the Trotskyists. In 1939 Kenzhin was shot, his wife was sent to Alzhir and daughter to the orphanage. His sons wandered among relatives, then died in the Great Patriotic War. From the late 190s Kenzhin’s family many times appealed to higher authorities with request for rehabilitation. They eventually got it after 31 years in 1990.

In 2012, the archive together with the Assembly issued the book «History of deportation. Kazakhstan. 1930–1935» («Из истории депортаций. Казахстан. 1930—1935 гг.«), where was presented documents about deportations of the collectivization period on the territory of Kazakhstan, which was the integral part of the campaign on «elimination of Kulak as a class». The documents tell us about the formation of regime «special settlement», work and living conditions of settlers — one of the categories of repressed citizens. Nowadays, composing team of the Administration of President of Kazakhstan (AP RK) prepares to issue the second book «History of deportation, 1935–1939». It will contain the documents about forced resettlement of Finns, Polishes, Germans, Kurds, Armenians, Turks, Korean and Iranians to Kazakhstan. The collection tells about the problems that have arisen in the country as a result of settlement of a large mass of people with different cultural and community traditions, religious affiliation and language. Also it include about the changes in the national policy of the Soviet Union that led to Russification.

This sad list can be continued. For 20 years, AP RK works in this direction, in collaboration with the Institute of History and Ethnology.

This sad list goes on. For 20 years, AP RK works in this direction, in collaboration with the Institute of History and Ethnology named after Sh. Ualikhanov, archival agencies and archives (state and industrial) of Kazakhstan, Assembly of People of Kazakhstan and cultural centers, Kazakhstan historical and educational society «Adilet». Existing results are collaborative effort. In recent years was collected and published huge factual material. Each collection of AP RK publishes from 80% to 95% of previously unpublished documents, 45–50% of them were not even known to a narrow circle of specialists. But duty of memory of people living nowadays is not given fully for those who died in the terrible years of repression.

Within the project was held a festival of folk songs and instrumental art «Song of the Steppe», an exhibition of ancient musical instruments. Invited people were able to touch the rich history of one of the oldest cities in the country, visit the museum complexes in the city and region. The building of historical museum itself is one of the unique exhibits of the city. In 1917 in the mansion, which formerly owned by the city governor, there was Freedom House, where the congress was held, at which the question about the Kazakh autonomy was raised. At the museum of Fine Arts named after Nevzorov’s family, was collected unique collection of Brullov, Lebedev, Venetsianov, Perov, Kramsky, Levitan, Korovin and Shishkin’s works, also the works of Western masters and Kazakh artists.
Indeed, priceless gift of East Kazakhstan akimat (regional executive authority of Kazakhstan) to the participants of the forum was the visit to the Abay’s State historical-cultural and literary-memorial museum in Semey and its branch — Museum-reserve «Zhidebay — Borili», located in 180 km from the city. At the museum named after M. Auezov in Borili village includes house-museum, mausoleums of Omarkhan and Nurzhamal — parents of M. Auezov, also graves of Abay’s son and his wife Dilda. Museum-reserve «Zhidebay» includes Abay’s house-museum (consisting of 8 halls) with suburban exposition and mausoleum-complex «Abay-Shakarim». There is a mosque in this museum. Graves of Abay’s relatives: grandmother Zere, mother Ulzhan, spouse Erkezhan, brothers Kudayberdy and Ospan, nephew Shakarim and his son Akhat, located in its area. Architectural appearance of wintering, reconstructed in 1970 to the 125th anniversary of the poet, has retained its original appearance. In the five rooms and three halls of the museum displayed things sent by Abay’s relatives and friends. Among them there are books in Arabic, Persian, Turkish, Russian languages, photos, three-stringed Abay’s dombra, household items and so on.

In 1951, Kayum Muhamedhanov, the founder of Abay’s study, the author of the first Kazakh anthem and native of Semey, was repressed for desire to preserve Abay’s scientific heritage. He was sentenced to 25 years in prison and sent to Karlag for the fact that his writings «under the guise of Abay’s students were exalted bourgeois nationalists, who lived before the age of the Soviet period, have become ardent enemies». His son Degdar Kayumovich, senior lecturer in philosophy and political science at State University named after Shakarim said that the lesson from the hardship that our nation passed through can be learned only when it transforms into an everlasting memory.

At the forum took part international experts, deputies of the Parliament of Kazakhstan, scientists of Kazakhstan, Mongolia, Russia and Ukraine, descendants of repressed, ethno-cultural communities and public organizations. In conclusion, the Head of State — the President of Assembly of Peoples of Kazakhstan received following message from the participants:

«Celebrating the Memorial Day of Victims of Political Repression on the eve of the 20th anniversary of the Assembly of People of Kazakhstan, we, the participants of the International Forum „Memory of the Future“, initiated by the Assembly, declare that one of the priorities of your policy of peace, social cohesion and national unity is preservation of historical memory, which serves as a lesson for the present and future generations.

Thanks to your political will, Kazakhstan has received wide recognition in the international community as a state in which tolerance and trust between nations is the social norm of culture and moral imperative. Today in Kazakhstan we celebrate the great work on the history of totalitarian terror, massive deportations of peoples, political camps and repression, which forms an objective and honest look at our shared history and serves to prevent a repetition of the past in the future.
We gratefully state that tolerance, generosity, wisdom and hospitality of the Kazakh people, who survived in hunger and saved the lives of hundreds of thousands of men and of nations.

In 2010, with your support the tradition of international action „Memory of the future“ was organized in Kazakhstan.

Today, the whole country participates in this action. There are 2123 events where 350,000 people participate in them. One more step was made for the development of national consciousness, strengthening the culture of peace, spirituality and harmony.

We, the participants of the international forum „Memory of the future“, declare full support for your policy of social cohesion and national unity, which was widely recognized throughout the world.

We firmly believe that only by preserving the historical memory, shaping our national values of solidarity and trust, can successfully achieve our common goal — to build a stable, prosperous and prosperous Kazakhstan!»

Yevgeniya Chilikova,
Chief expert of Administration of the President of the Republic of Kazakhstan