Home News Other Symbols of the new country

Symbols of the new country 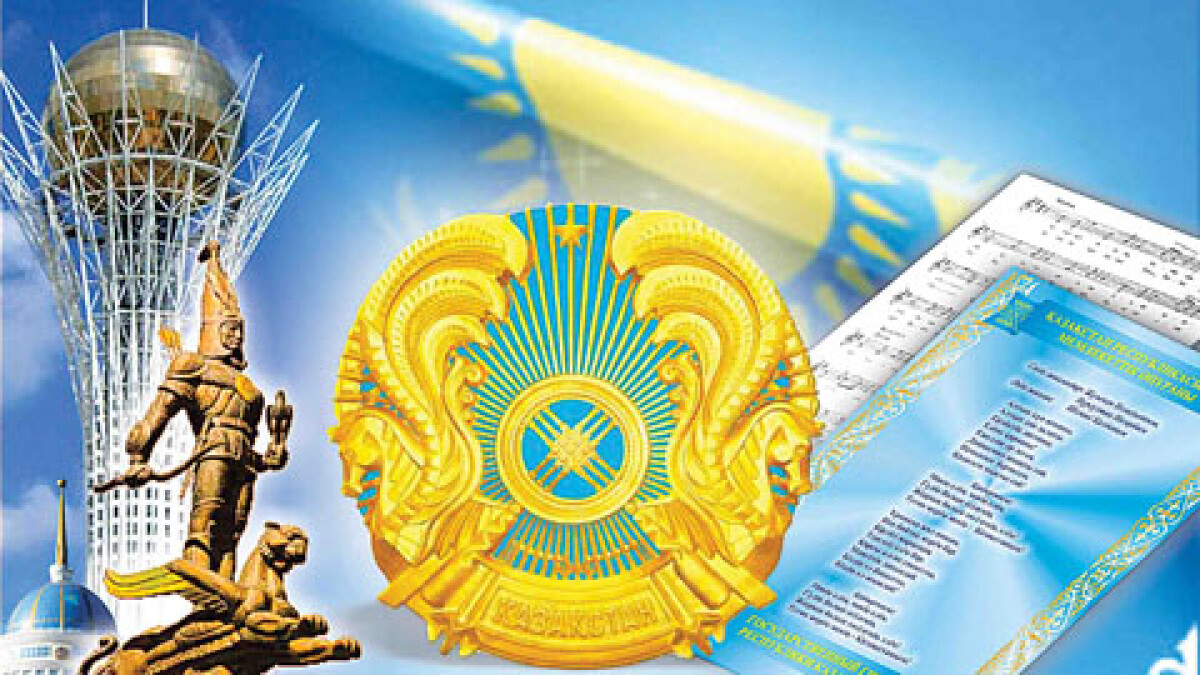 An important manifestation of the new Kazakh statehood is the symbolism of the Republic of Kazakhstan.

State symbols are not only artistic images, but also the heralds of the idea of the state independence. The state symbols contribute to the penetration of this idea in the thoughts and feelings of the people.

The purpose of the Kazakhstan state symbols is, on the one hand, securing the main priorities of the idea of statehood such as integrity, independence and unity in the minds of citizens. From another hand it is the formation of the image of Kazakhstan at the international level as an advocate of peaceful neighborliness. In the state symbols reflects the main features of the Kazakh philosophy — fundamental national and universal values, which helped maintain the historical continuity of generations. State symbols are external forms of the ideology of national statehood.

Kazakhstan national symbols are inextricably linked. Complementing each other, the characters represent a single entity in the perception of citizens of the Republic of Kazakhstan and the international community as the basis of the stability of the republic.

It is seems that only a deep knowledge and understanding of the content of national attributes, penetration and knowledge of their essence increases the interest, respect and pride to these essential elements of life of our state. But also there is a big difference between blind faith, mechanical obedience and conscious action of the citizens.

People of the different countries are proud of their state symbols. It is important not only to know how emblem, flag and anthem of the country look like, but also to understand their symbolism. For this reason it is necessary to have an idea about their history, how did these national symbols emerged and what path they went through the centuries.

The emergence of the flag as a symbol of power and state attributes has a long history. We can assume that in ancient times his appearance contributed to at least two circumstances. First, it is the desire of people to define a symbol close to the heart and mind of the subject. Also the constant reference to it in peacetime gives confidence and calmness, during the war would raise the spirit and courage appealed to their owners.

On the basis of archeological date and historical sources it is known that for the ancient Egyptians were the symbols of their gods and pharaohs, for the Assyrians were the image of the Pegasus and Minotaur. For these reason different people at the different times used silhouettes of bull, turtle, owl, eagle, snake, dragon and so on. In the Middle Ages even every knight had his own banner despite the grafs, dukes and kings. The color of the banner was various.

Secondly, the symbols, except being only the source of inspiration and people’s pride, also had to perform an external function. They had to be formed in such a way that when strangers would have seen them they could judge about the features of this nation, its military or peacefulness, the forms of economic and living conditions, determine its power and greatness. For example, for the first time the flag of the ancient nomadic tribes of the Scythians were in the form of an inflatable banner. It was a long bag, the shape of which reminded a dragon with mouth, feet and tail in the form of sleeves. In the wind it will be inflated with air to fright the enemies.

Modern state flags often consist of colored bands, they usually rectangular, but there are exceptions. For instance, Switzerland and Vatican flags are square shaped and Nepal’s is triangular.

The blue color of the Kazakhstan’s flag indicates cultural and ethnic unity of the people and at the same time points to the idea of the indivisibility of the state. Light is the source of life and energy. So, the sun is the symbol of life. Not by chance the sun’s rays (32 rays) on our flag as well as have the shape of the grain, which is the basis of abundance and prosperity.

Steppe eagles and golden eagle take a special place in the nomadic worldview.
In the language of symbols, the eagle’s silhouette means the state power, wide scope and sagacity. For the steppe people it symbolizes freedom, independence and strives for a goal, dignity and voyage for the future.

At the same time, an eagle, having a powerful force is capable to rebuff to anyone who tries to prevent progress into the future. The eagle’s silhouette originated from the idea of aspiration of young sovereign Kazakhstan to the high level of world civilization. The element that gives the novelty and originality to our flag is a vertical strip, consisting of national ornament. Here shown the Kazakh ornament Koshkar-muiyz («қошқар-мүйіз» (horns).

Shaken Niyazbekov is the author of Kazakhstan’s flag. Our new symbol is the result of creative research, selfless work of this artist. More than 600 projects participated in the competition dedicated to the development of the national flag. After preliminary selection the four most interesting projects were put forward for discussion by the Commission of the Supreme Council of the Republic.

June 4, 1992 will forever remain in the history and memory of the people as birthday of the State emblem of the Republic of Kazakhstan. Today widely used term «emblem» is derived from the German word «erbo». In the Kazakh language is the equivalent to word emblem is tanba, which means «tamga» or sign». For the first time this term was used in the ancient Turkic Khaganate (551–630).

The name of the State emblem in Kazakh language is «Eltanba». The emblem represents the central arch of the yurt called shanyrak, on a blue background, from which to all sides spread the poles as the sun rays called uyk framed by wings of mythical horses. In the upper part of the emblem there is a five-pointed star, the sacred sigh of the ancient Turks, and the bottom part has the inscription «Kazakhstan». In the color image were used two colors, gold and blue-green. The first corresponds to the prosperity of the people of Kazakhstan and second represents the blue sky, common to all people of the world, as well as Kazakhstan’s aspiration to peace, harmony, friendship and unity with all peoples of the world.

Shanyrak is the upper part of the dome part of the yurt. It symbolizes the family well-being, peace and universe. Tundik — antiaircraft aperture yurt reminds the bright sun on blue sky peace. Dome poles — uyк,uniformly diverging from the center on a blue space emblem resemble rays of the sun — the source of life and warmth. Authors managed to solve the problem of image kerege — sliding trellised bases yurt. Cross-triple kүldіreuіsh supporting shanyrak symbolize unity of three zhuzs which ensures its durability. Thus, the language of heraldry authors reflects peaceful essence of Kazakhstan.

Tundik is the large felt mat that covers the upper opening of the yurt — chimney. It symbolizes the bright sun on background of peaceful blues sky. Dome poles — uik, evenly spread from the center on a blue space of emblem, they remind the rays of the sun as the source of life and warmth. The authors managed to solve the problem with image of kerege- sliding trellised bases of yurt. Cross-triple kuldireush that support shanyrak symbolize unity of three zhuzs which ensures its durability. Thus, by the language of heraldry authors reflect peaceful essence of Kazakhstan.

One of the parts of the emblem is golden-winged horses with horns in the shape of crescent. The silhouette of horses in the language of heraldry has a profound meaning: it means courage of lion, vision of falcon, physical power and strength of a bull, quickness, speed and flexibility of fallow deer, cunning and ingenuity of fox in fight against the enemies. Golden wings of horses also remind sheaves of grain, golden barleys that is a sign of work, abundance and material prosperity.

Golden wings racers remind also sheaves of grain, golden ears, that is a sign of labor, abundance and material prosperity. Besides horse is the companion of nomads, they closely linked with the whole economic and spiritual life. Winged horse represents aspiration for strong and prosperous state. Five-pointed star express the desire of Kazakhstan’s people to joint to the community of nations and people from all five continents.

Modern emblem of sovereign Kazakhstan is the result of enormous work, creative pursuit of two famous architects: Zhandarbek Malibekov and Shota Ualihanov. To win in this competition was not easy. Just to remind that in the final competition involved 245 projects and 67 descriptions of the future emblem. Kazakhstan’s emblem symbolizes the eternity of life.

June 6, 1992 in the building of Almaty Opera and Ballet named after Abay was held a ceremony dedicated to the state symbols of the Republic. On the same day over the residence of the President and the Supreme Soviet of the Republic of Kazakhstan was raised national flag and set national emblem.

Standards of the State Flag and State Emblem are stored in the residence of the President of the Republic of Kazakhstan. They were taken from Almaty to Astana, the new capital, by special transport accompanied by a guard of honor.

Changes happened in the public consciousness, demand new content also musical and poetic symbol of the country. National Anthem — anuran is the official symbol of the state, the musical equivalent of the emblem and flag. In early 1992, a competition was announced for the music and lyrics of the new anthem of the Republic of Kazakhstan. In the selection committee was sent to about 750 projects. Four people won in a poetic marathon: Muzaffar Alimbayev, Kadir Myrzaliev, Tumanbay Moldagaliev and Zhadyra Daribayeva. Their lyrics were set to music of the composers Mukan Tulebayev, Yevgeny Brusilovsky and Latifa Hamidi.
Anthem is the national symbol of the sovereignty of the republic, unity of the people of Kazakhstan. Emotional core of the anthem is strong inspiration and spiritual rise that unite people in their love to country and devotion to the Fatherland.

However, in parallel, the Kazakh song «Menin Kazakhsatanym» («My Kazakhstan») was sounded to express patriotic feelings of people of Kazakhstan. Written in 1950s by Shamshi Kaldayakov and Zhumeken Nazhimedenov, the song won the hearts of Kazakhs as the unofficial anthem of the country.

In the further discussion, a number of deputies of made a proposal officially include the President of Kazakhstan Nursultan Nazarbayev as the author of the new anthem «Menin Kazakhstanym» («My Kazakhstan»). Majilis deputies and the Senate unanimously

Majilis deputies and the Senate unanimously recognized as the authors of a new anthem’s text J. Nazhimedenov and N. Nazarbayev.

January 10, 2006 became known in history as the birthday of Kazakhstan new national anthem. New official symbol of poetry and music was performed for the first time on January 11 at the Presidential Palace «Akorda» in Astana during the inauguration of N. Nazarbayev after his victory in the next presidential election. 70 guests from different countries witnessed the presentation of the anthem. Among them were the presidents and prime ministers, ministers and diplomats, heads and representative of international organizations.

In the performance of the anthem of Kazakhstan at official ceremonies people stand up and put their right hand to the left side of the chest. Content of the text and energetic, upbeat melody of the new National Anthem of Kazakhstan awaken in the hearts of patriotic feelings.

Symbols of Kazakhstan are indisputable evidence of the sovereignty, independence, unity and power of the people. They express the idea of the state of Kazakh democracy consolidation and aspiration to universal values and humanistic ideals. It is difficult to make anyone proud of state symbols, but every citizen should know and respect them, if he considers himself a patriot of his country.