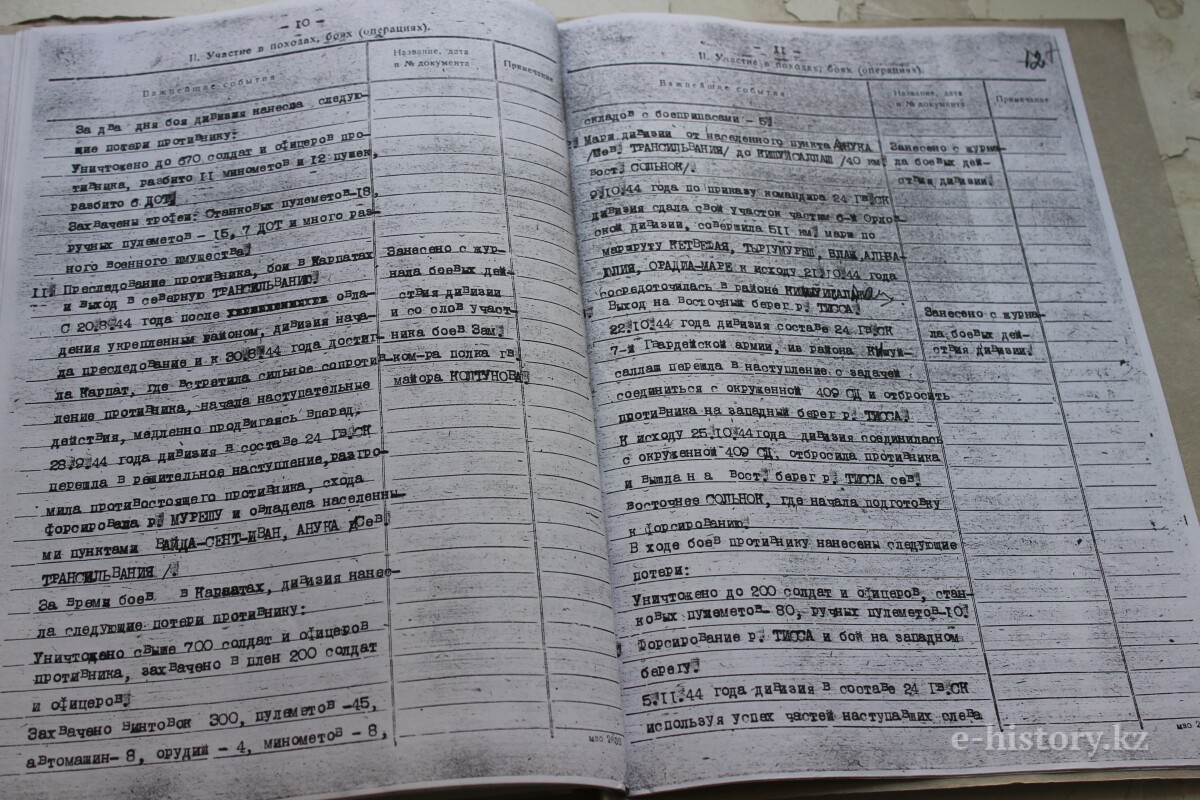 From 1941 to 1943 in Kazakhstan was formed and sent to the front more than 50 units and formations. There were 23 rifle divisions, 2 national rifle brigades, 3 national cavalry divisions, separate regiment, battalions and other units among them.

So, in wartime every fourth  citizen of Kazakhstan was in the battle.

Web-portal "History of Kazakhstan" for the first time published archival documents about divisions, formed in Akmolinsk, participated in major battles of the Great Patriotic War. Documents were declassified and brought from Central Archives of the Ministry of Defense of the Russian Federation (Podolsk).

In late 1941 and early 1942 in Akmola and Karaganda was formed 29 Rifle Division, who became famous in the battles of Stalingrad. March 1, 1943 it was transformed into 72 Guards Rifle Division.

Below there is a text of the combat magazine of 29th Rifle Division.

Two days before the battle division caused losses on the enemy:

670 soldiers and officers, 11 mortars, 12 cannons and 6 pillboxes of the enemy  were destroyed.

Chasing of the enemy, fighting in the Carpathians and output in Northern Transylvania.

Since August 20, 1944, after mastering XXXXXXXX of fortified wagon, the division began the persecution and by the August 30, 1944 reached Carpathians, where met with strong resistance, the beginning of the offensive moving slowly forward.

During the fighting in the Carpathians division inflicted the following losses:

700 soldiers and officers of the enemies were destroyed and 200 of them captured.

The march of the division from the settlement ANOUK/North Transylvania/ to KISHUYSALDASH/40 km Eastern. Szolnok.

In October 9, 1944 by the order of Commander of 24 GV SK division passed her position to the 6th Orel division and made 551 km. The march route KETVEFAYA, TYRGUMURESH, ALVA-IULIYA, ORADIA-MARE by the end of the October 21, 1944 concentrated around KISHUYSALLASHA.

Exit to the bark of Tissa River.

In  October 22, 1944, the 24 GV SK division of 7th Cavalier army from the area Kishuysallash went on the offensive with the objective to connect with and surrounded by 409 DM and push the enemy back to the western bank of the Tissa River.

By the end of October 25, 1944, the division merged with 409 DM and drove the enemy to the east bank of the Tissa River, East of Szolnok, where it began training to force.

During the battles the enemy had following losses:

The forcing on the Tissa River and fight on the western shore.