Home News Other Kimal Akishev. The findings of lucky archaeologist 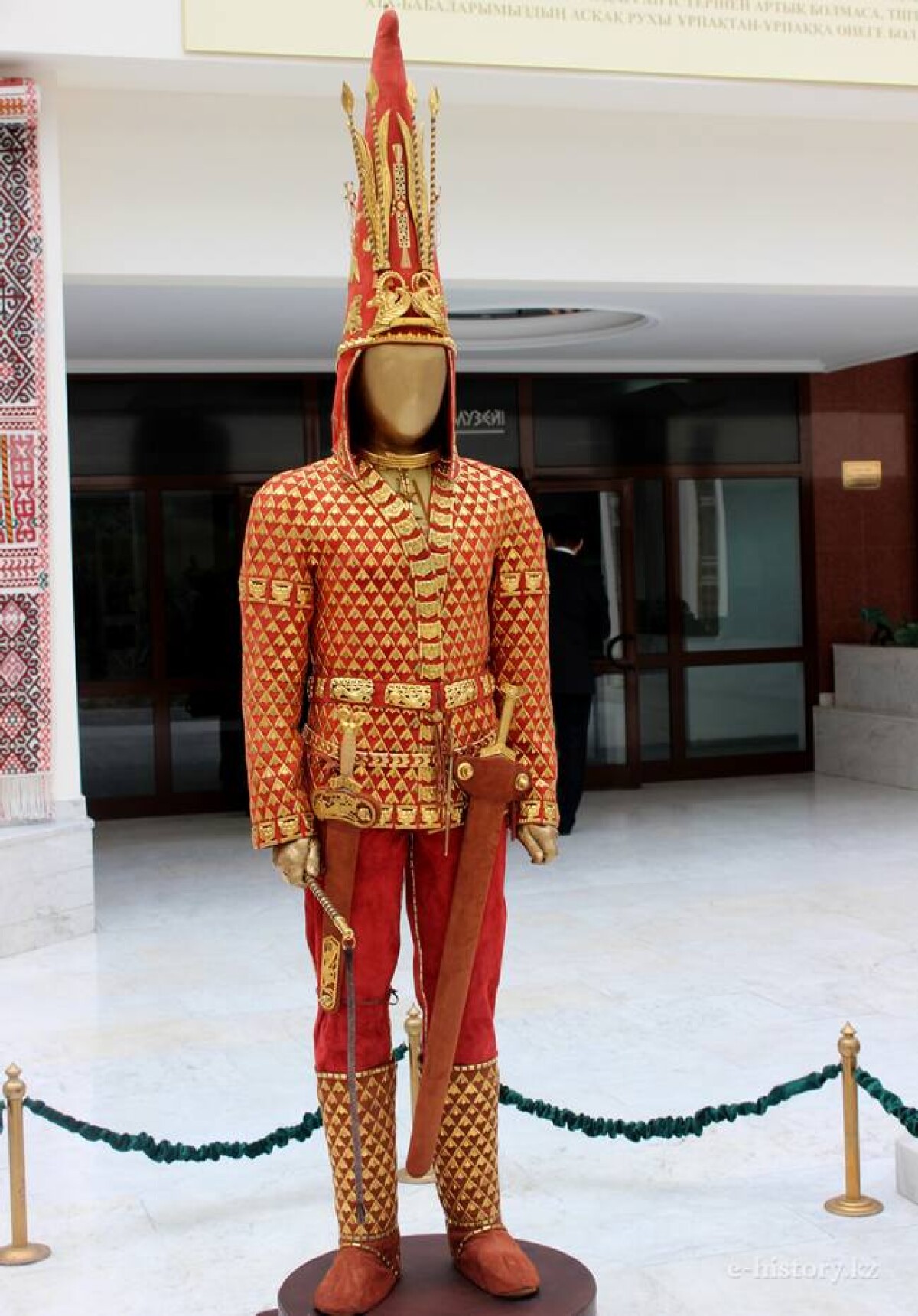 Opening of Scientific Conference, dedicated to 90th anniversary of the founder of the archaeological school of Kazakhstan named after K. Akishev, accompanied by an exhibition of archaeological finding

Kimal Akishev’ parents left him when he was very young.  His childhood coincided with a tragic time of collectivization and youth with the Great Patriotic War. Overcoming all the hardships of our history, his spirit grew stronger. He gained incredible thirst for life and a desire to learn. He was rewarded by fate. Archaeology has made him famous scientist, he did it as his life. Kimal was called lucky as he led excavations of the monuments that glorified Kazakhstan and enriched not only national, but also world history.

His name forever linked with the “Golden Man of Issyk Kurgan”, which was discovered during the archaeological excavations in the Almaty region in 1969. 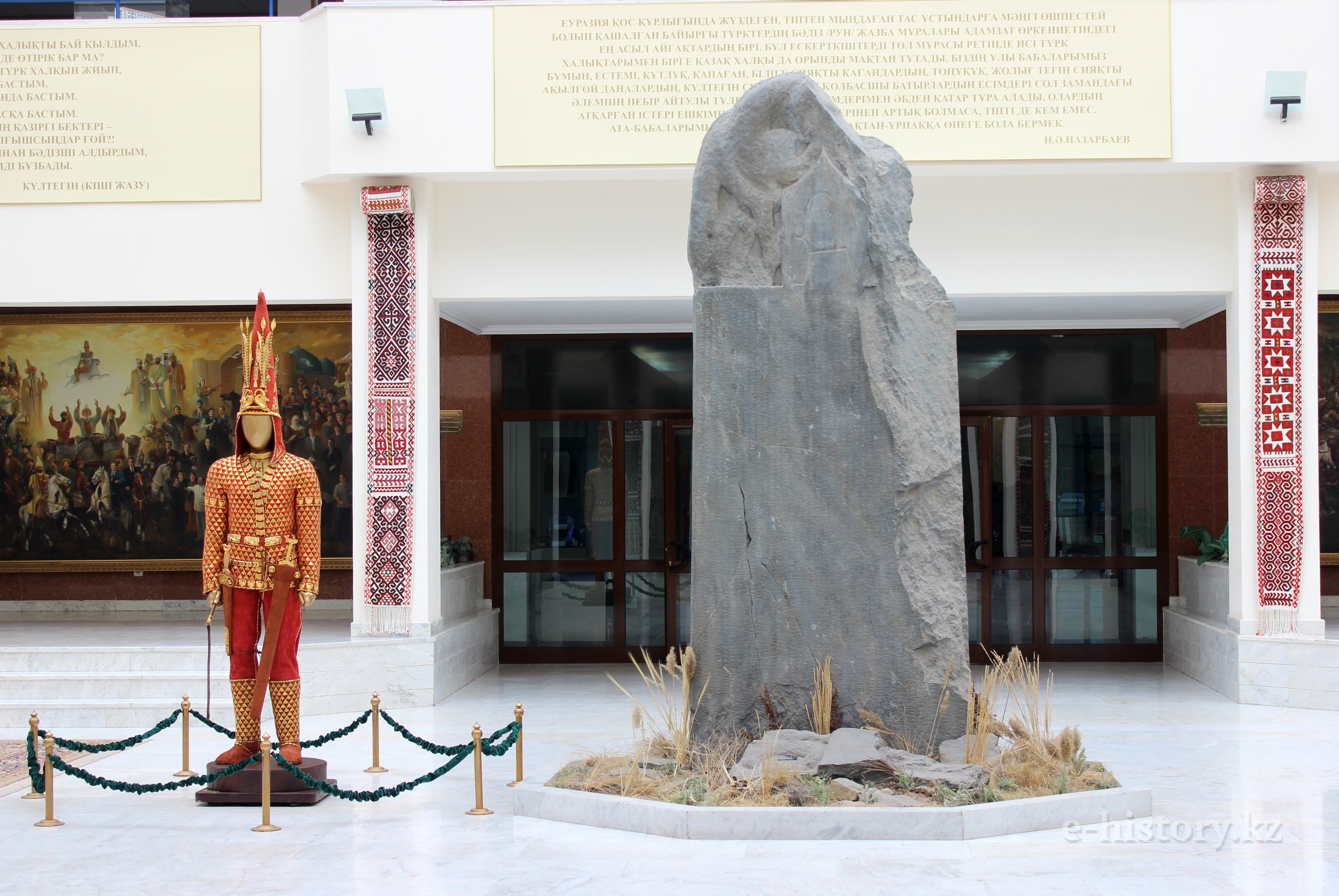 The burial of woman from Golden Horde period is another fabulous finding of expedition in the Bozok settlement, led by K. Akishev. “She was buried by Mongolian ritual: in wooden deck with a foot of sheep in her head. There features can determine very accurately that burial was Mongolian”, - said Bakhyt Hasenova, the senior researcher of branch of the Institute of Archaeology named after A. Margulan. 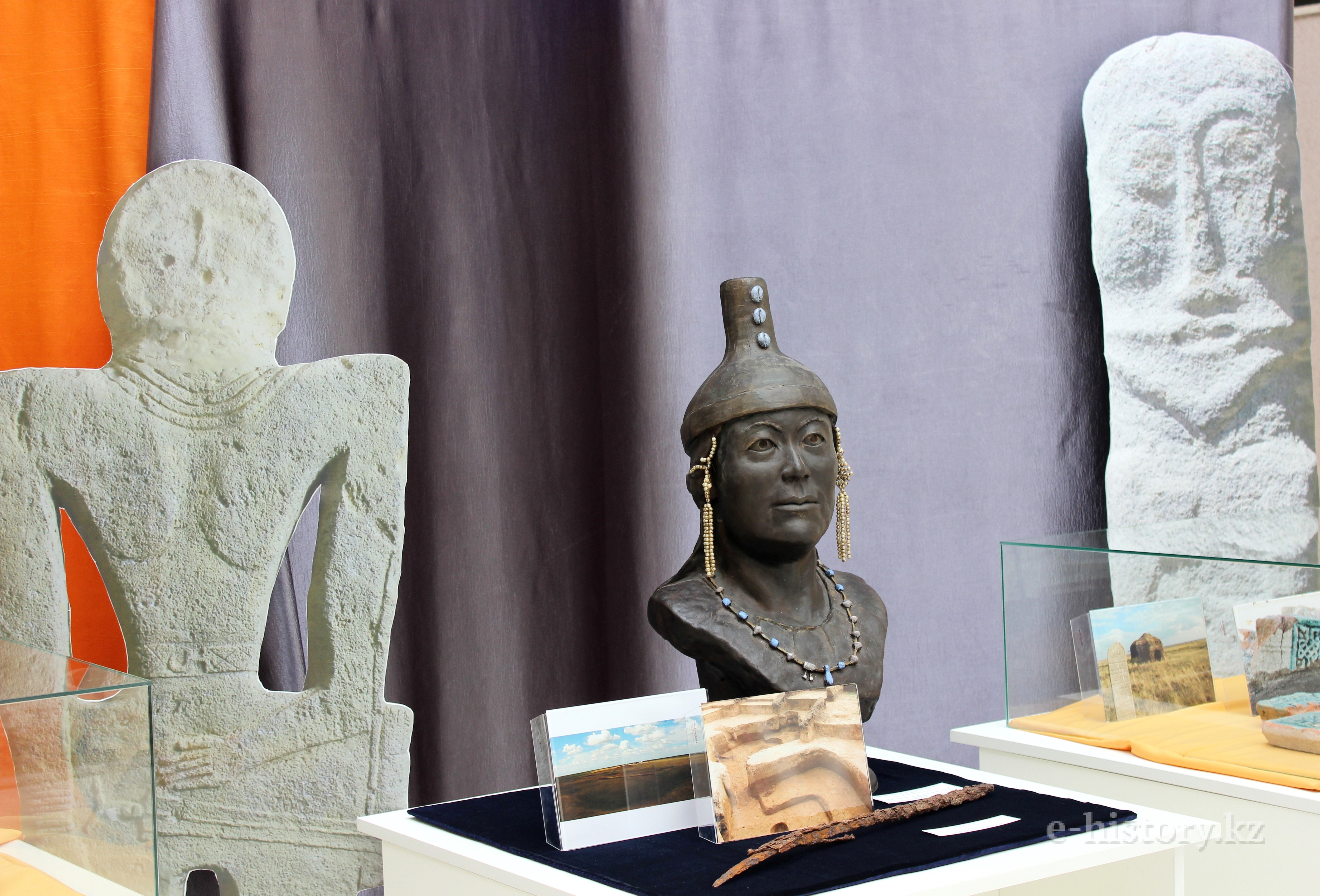 Looking at her burial it can be said that she was very noble. The remains let us make conclusion that she distinguished not only by her noble origin but also by her appearance. She was a tall and statuesque woman. It is surprising that despite the considerable growth and strong constitution, she had very thin wrists, which can be seen on the silver bracelets. On the given images of Mongolian noble women it was managed to reconstruct her stuff. The headdress was made of birch bark, covered with cloth and temple pendants were made of freshwater pearls. It is notable, that the peak and horse bridle were included in the burial. This prompts the scientists to think that a woman could have power. The ancient settlement Bozok was discovered by an archaeological expedition led by Kimal Akishev in autumn 1998. The ruins of ancient monument were found in 5 km from Astana (Ed., Kurgalzhin highway) on lakeside Buzukty. “Ground water is very salty, where lake itself is not. It is small, so-called “steppe saucer”, a huge number of birds you can see swans”, - says Bakhit Hasenova. 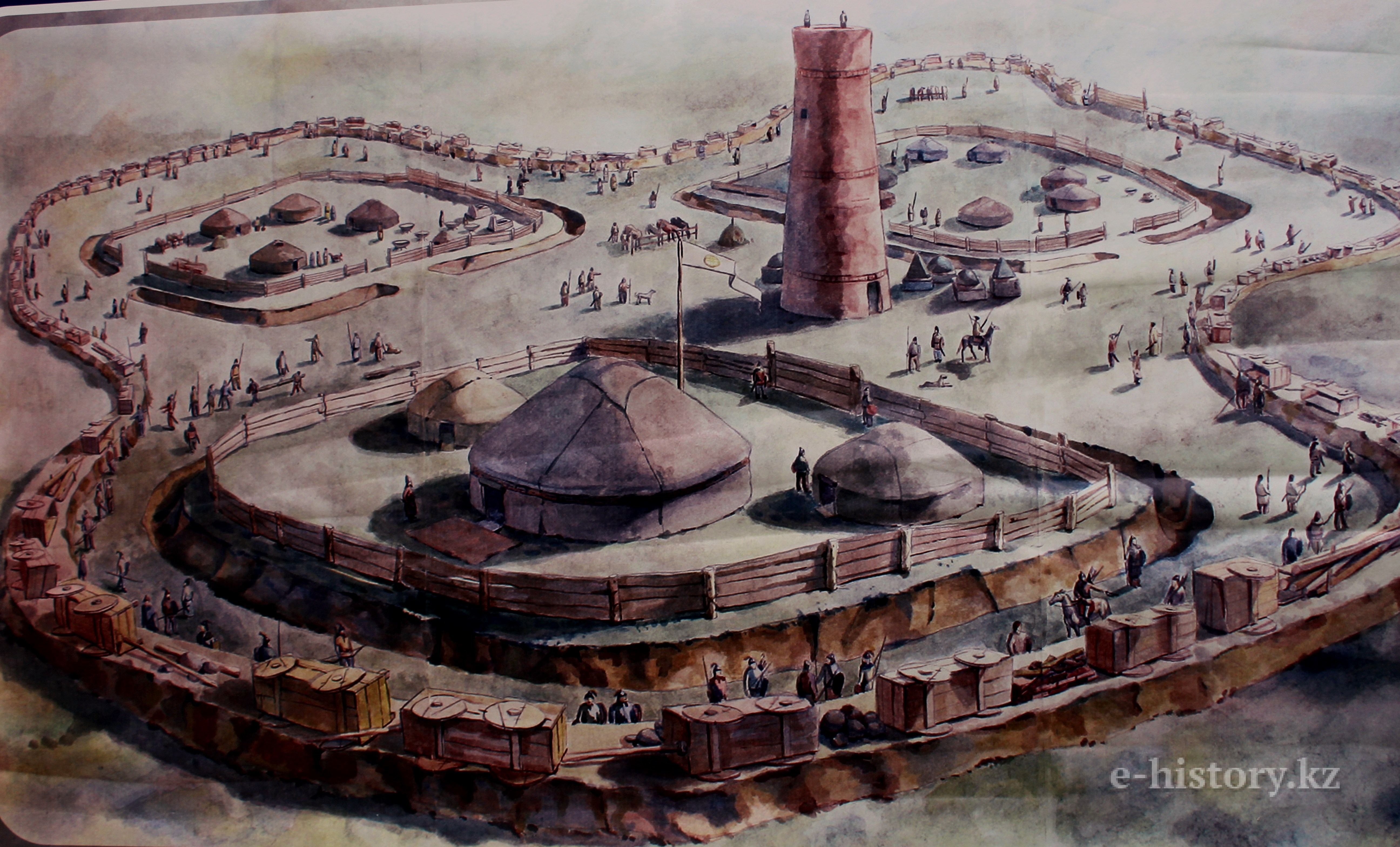 Bozok it is a unique settlement. It witnesses that the existence of sedentary tribes on the steppes of ancient Kazakhstan. Hence, its unusual architecture: the settlement consists of three separate parts. In the center there were quarters enclosed by a moat and rampart. In the north part there were residential and industrial buildings, in the south part there were necropolis, where during the Golden Horde were buried only “special” people.

Kimal Akishev had a big desire to organize on the place of the stunning findings the museum-reserve, but was not able to do it. Excavations of monument is still carried out, many students come there for an archaeological expeditions.  However, the settlement remained without protection collapses. The wife of the famous Kazakh archaeologist M. Habdulina sadly says that to solve this problem is impossible.

Also on the exhibition was presented the pottery tableware, which was found by archaeologists in different parts of Kazakhstan. “This is a sample of Andronov ceramics, - says Bakhit Hasenov, - it is appropriate for the north part of the country”. 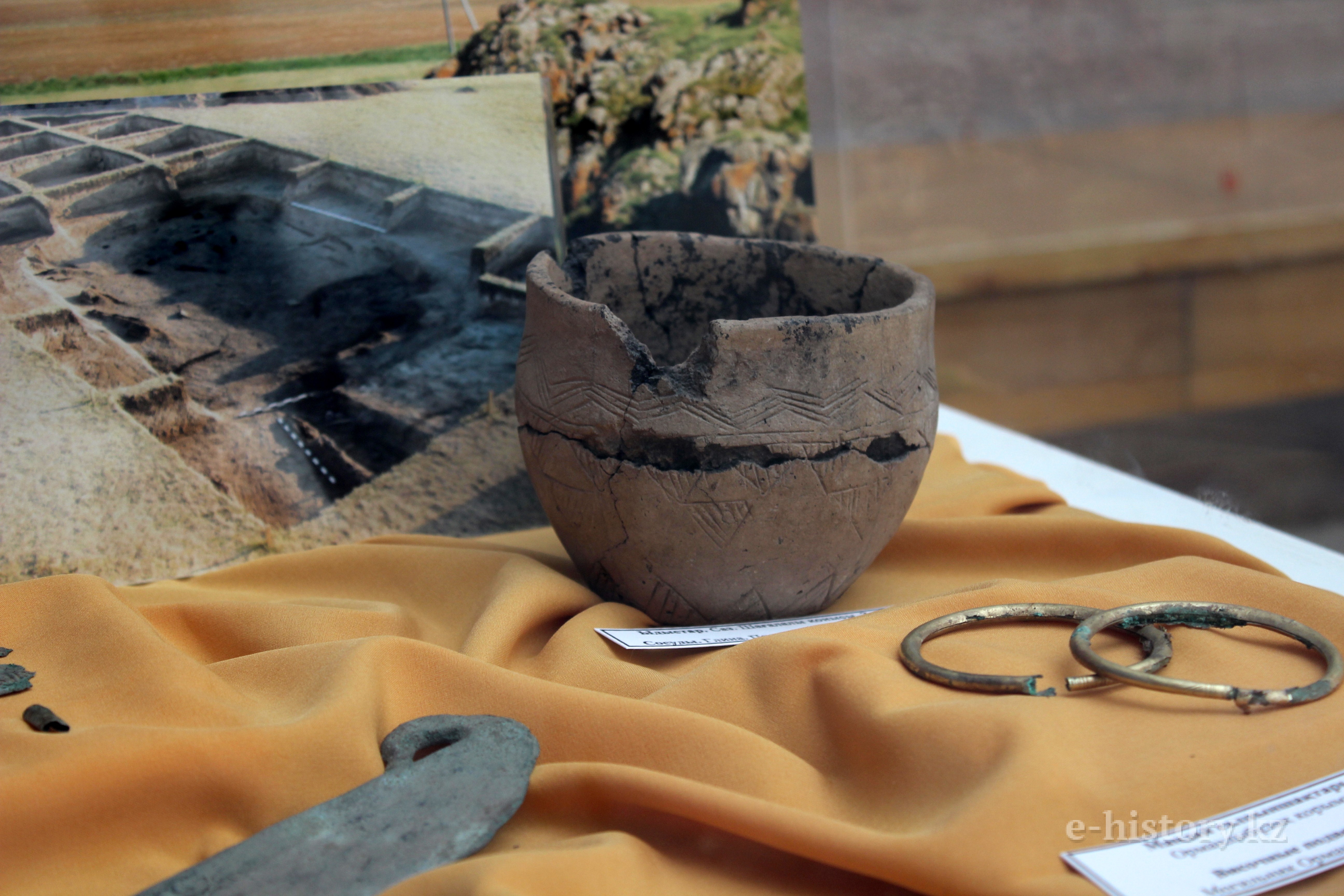 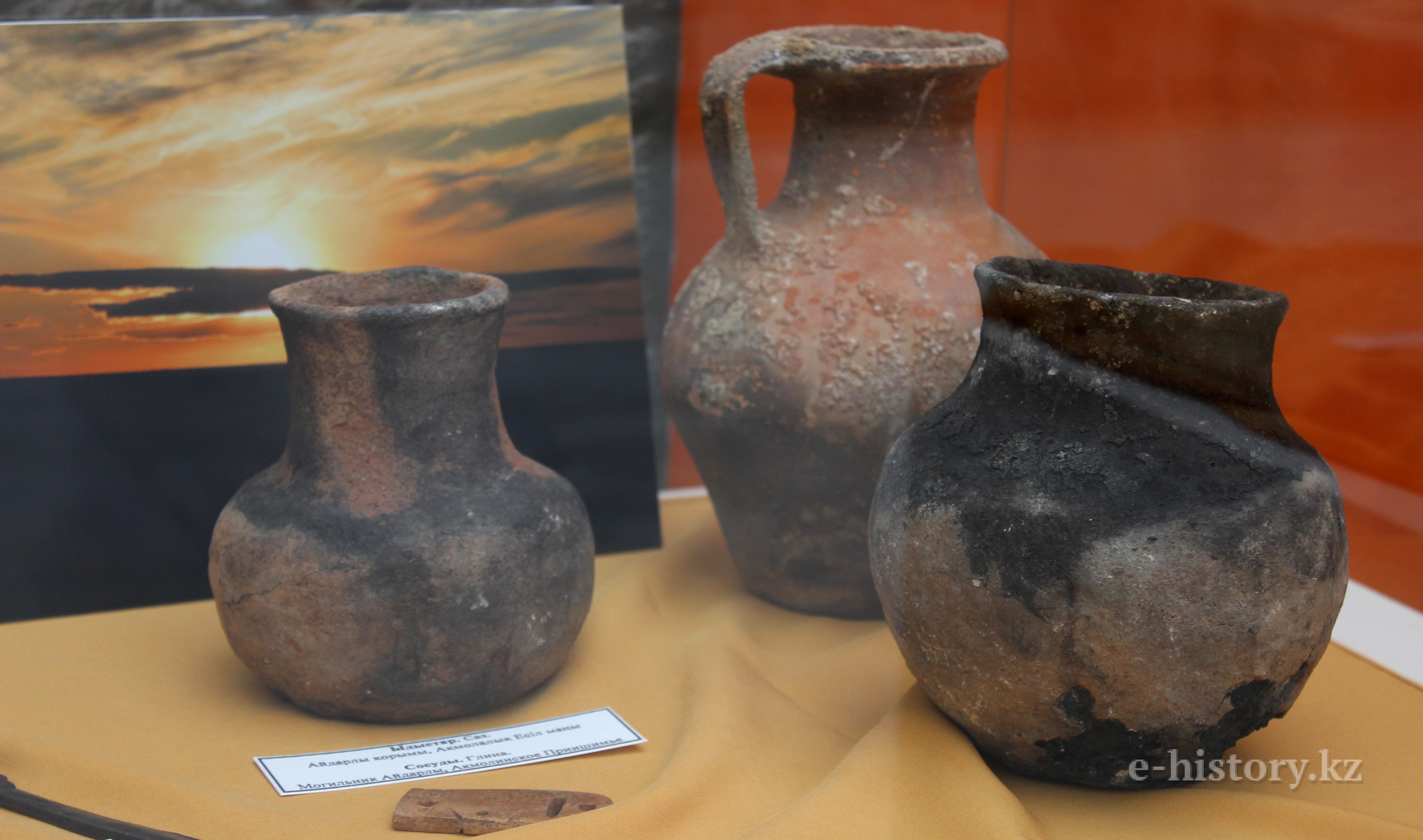 This is quite different “predatory” ceramics of the Bronze Age. It was found on Ustuiurt in the windy place. Living conditions at that place were always difficult. People worked very hard to survive in the condition of heavy wind and desert lands. 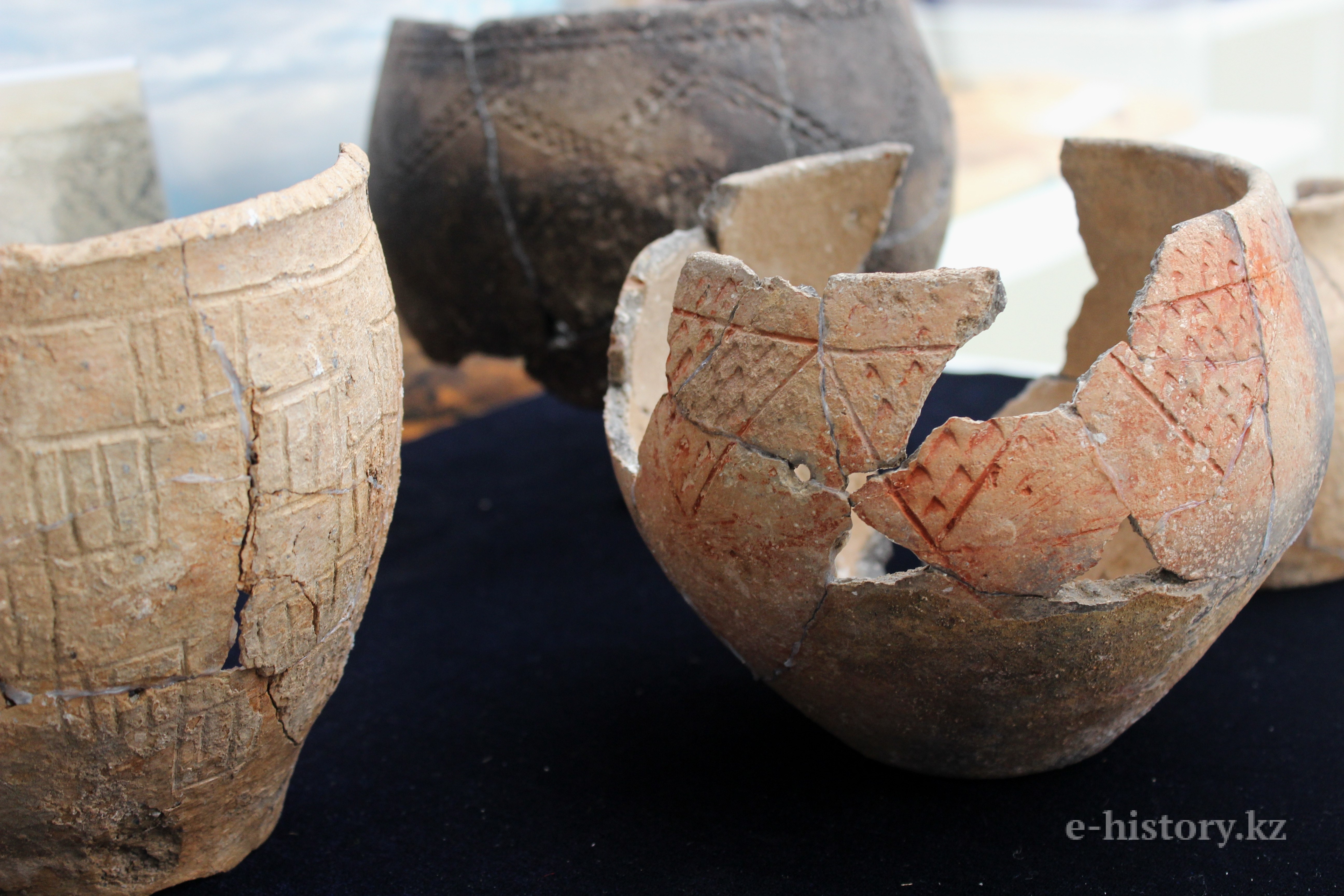 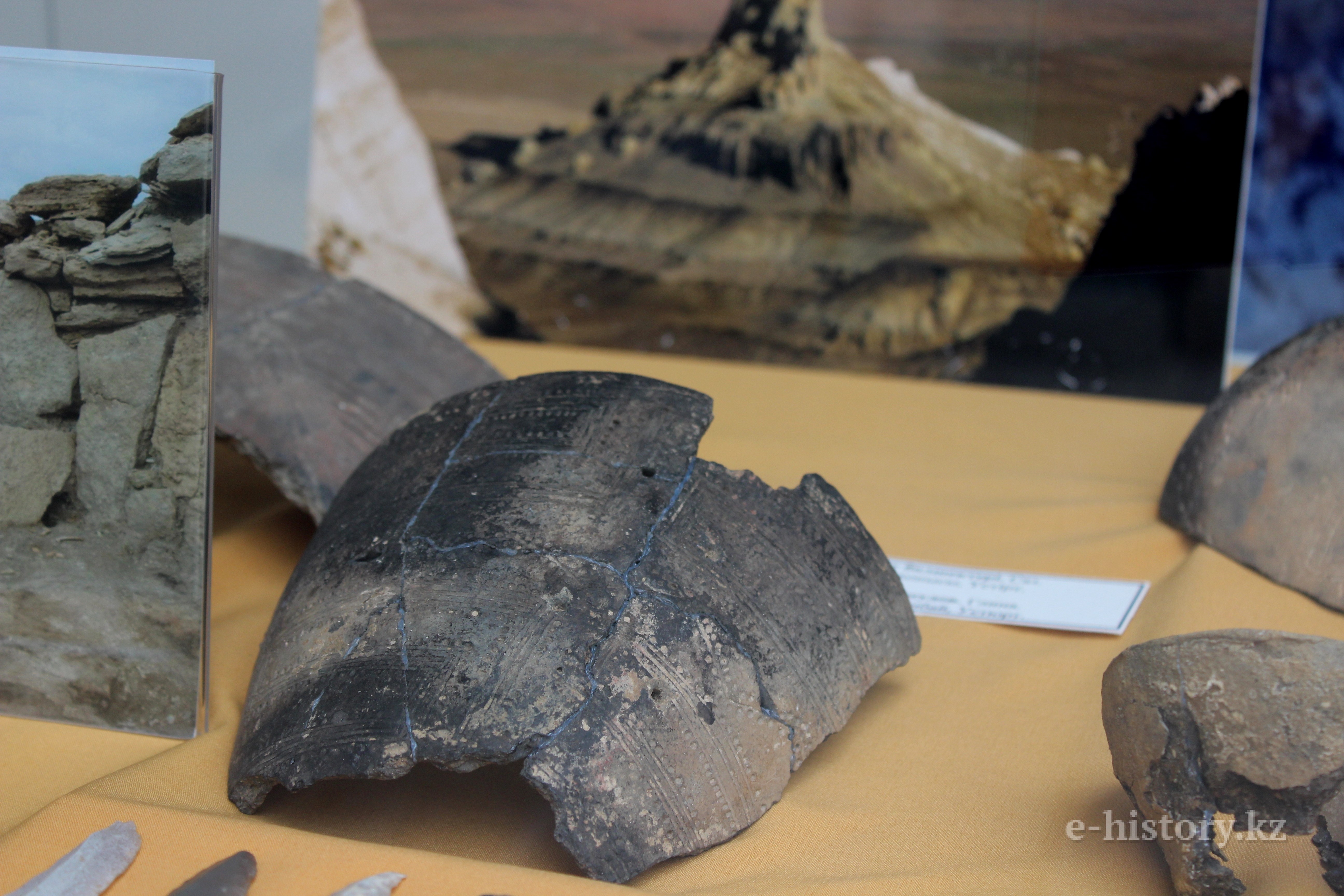 These pitchers were brought from the famous Valley of the Kings. The pottery was found by archeologists in one of the burial of Berel mounds in the East Kazakhstan. Necropolis resembles a boat. It was laid by vertical stones which closed it above as shell. However, time is ruthless to ancient monuments. Gradually stones column "parted" and revealed what they concealed. 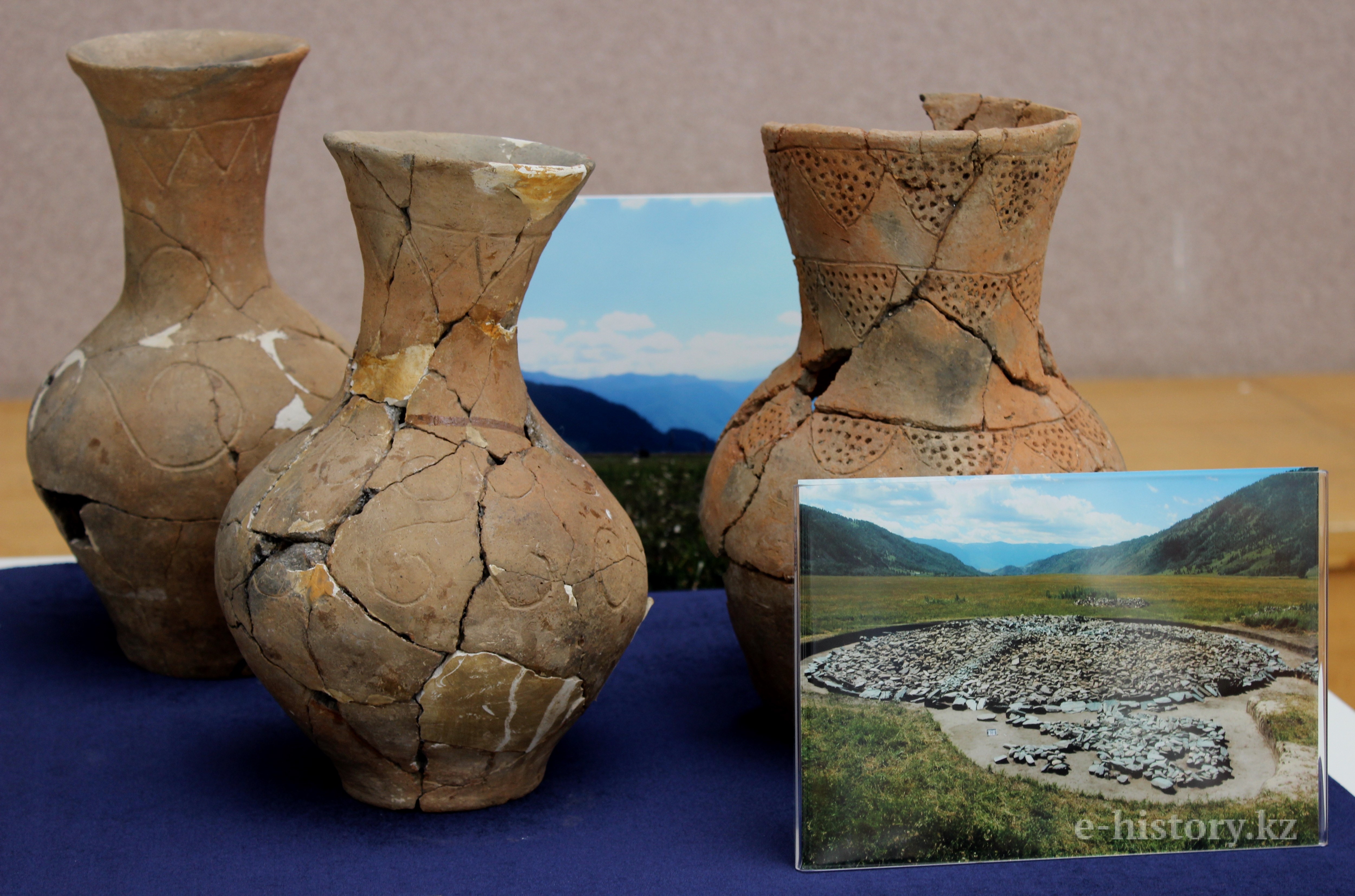 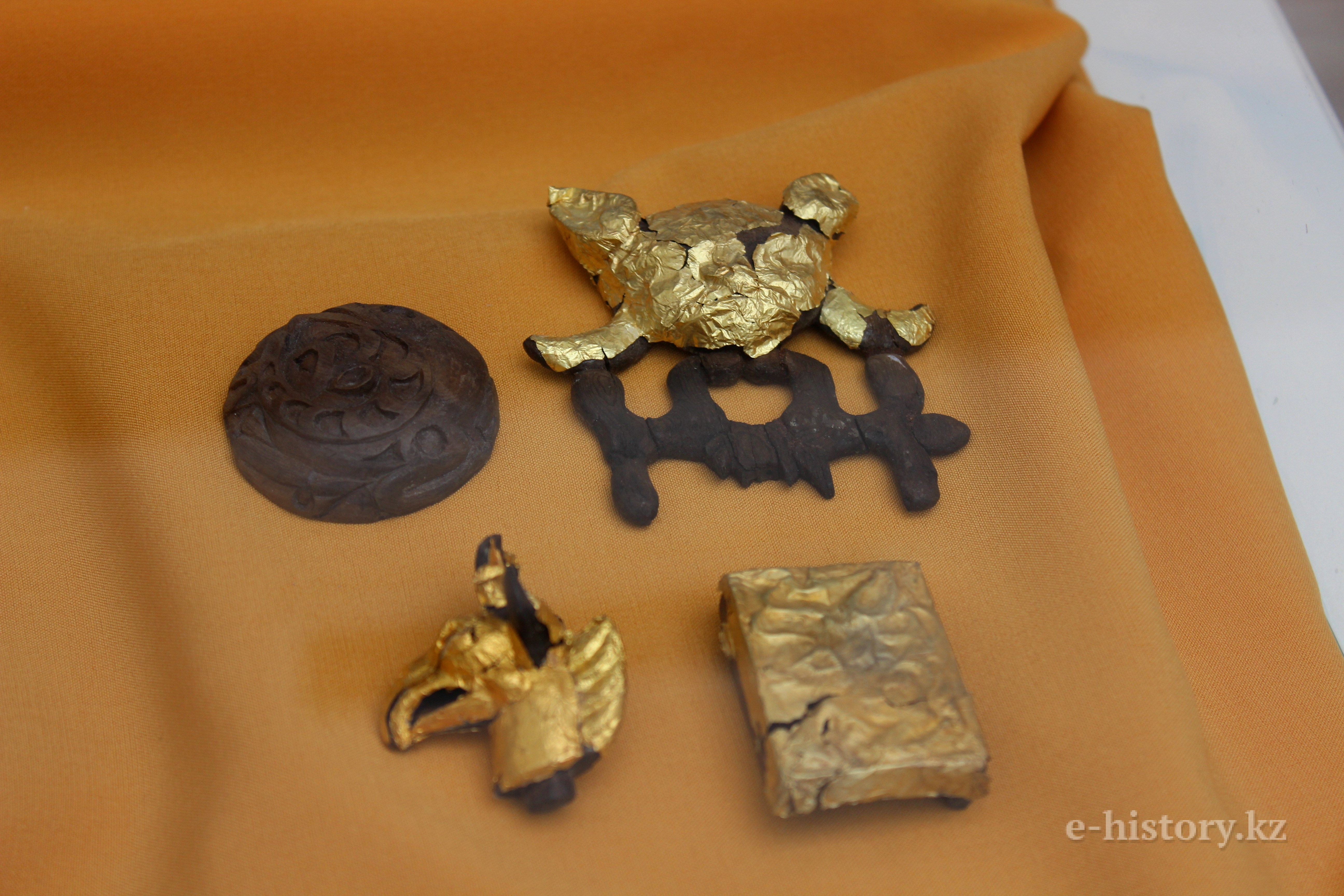 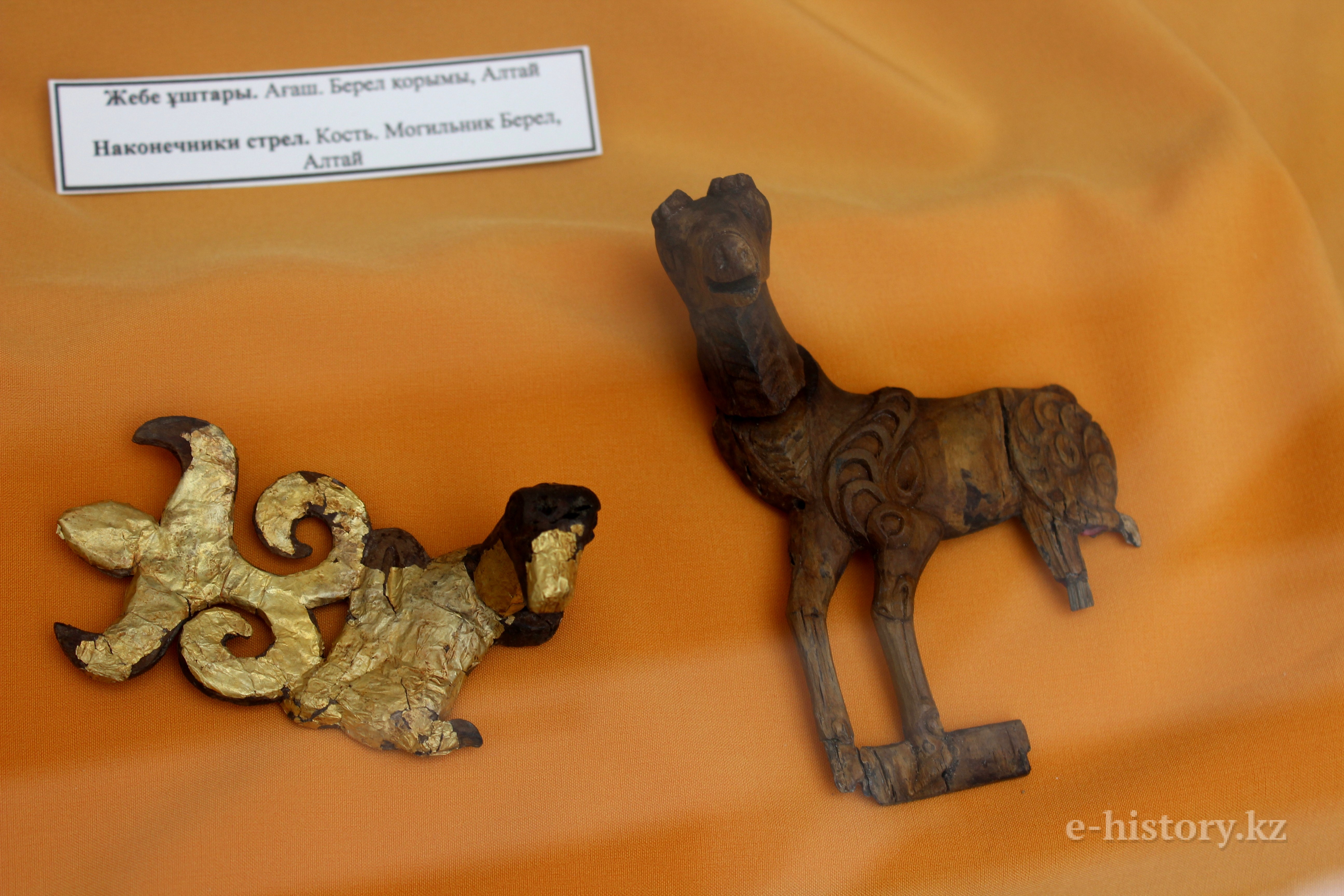 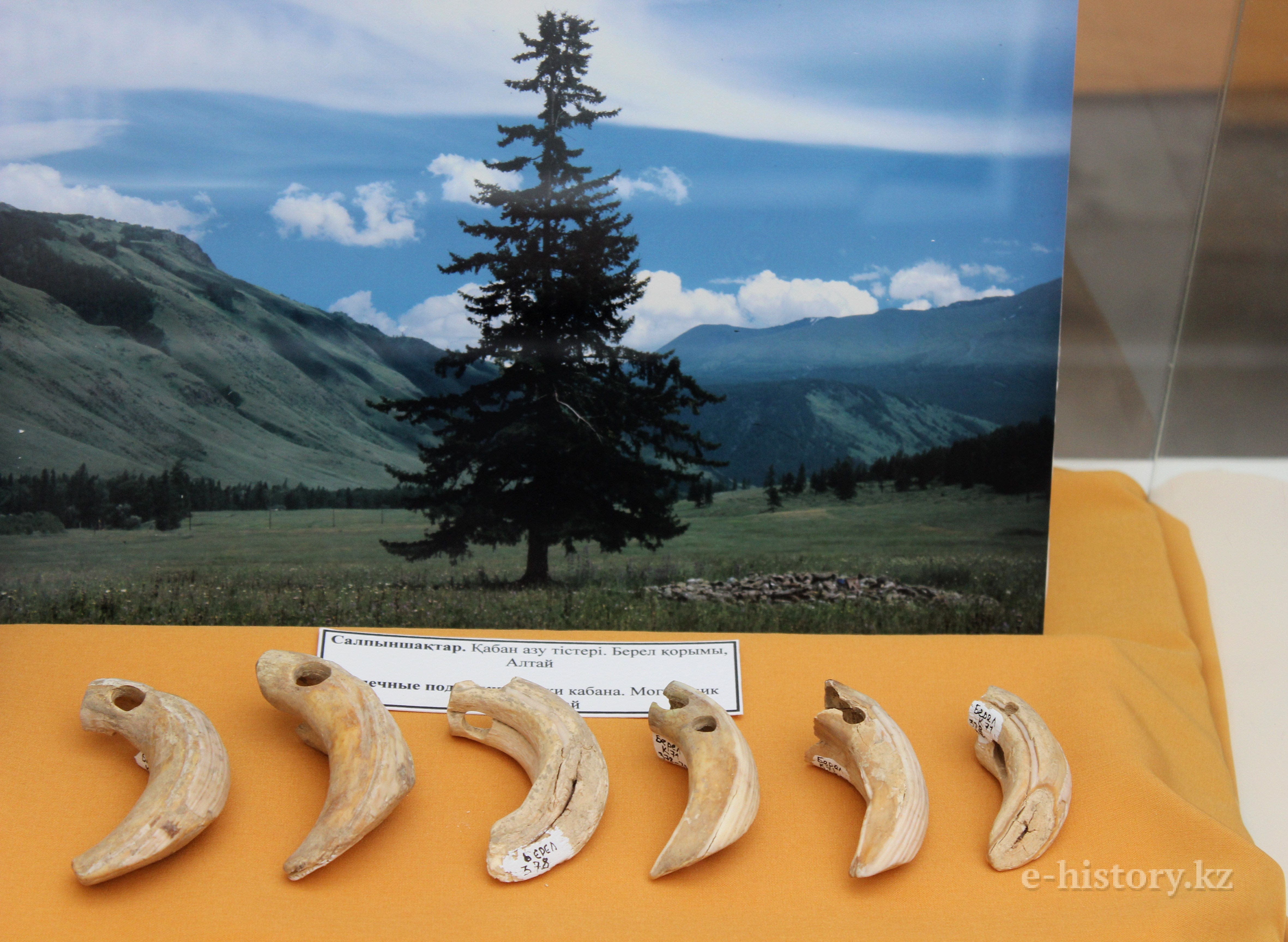 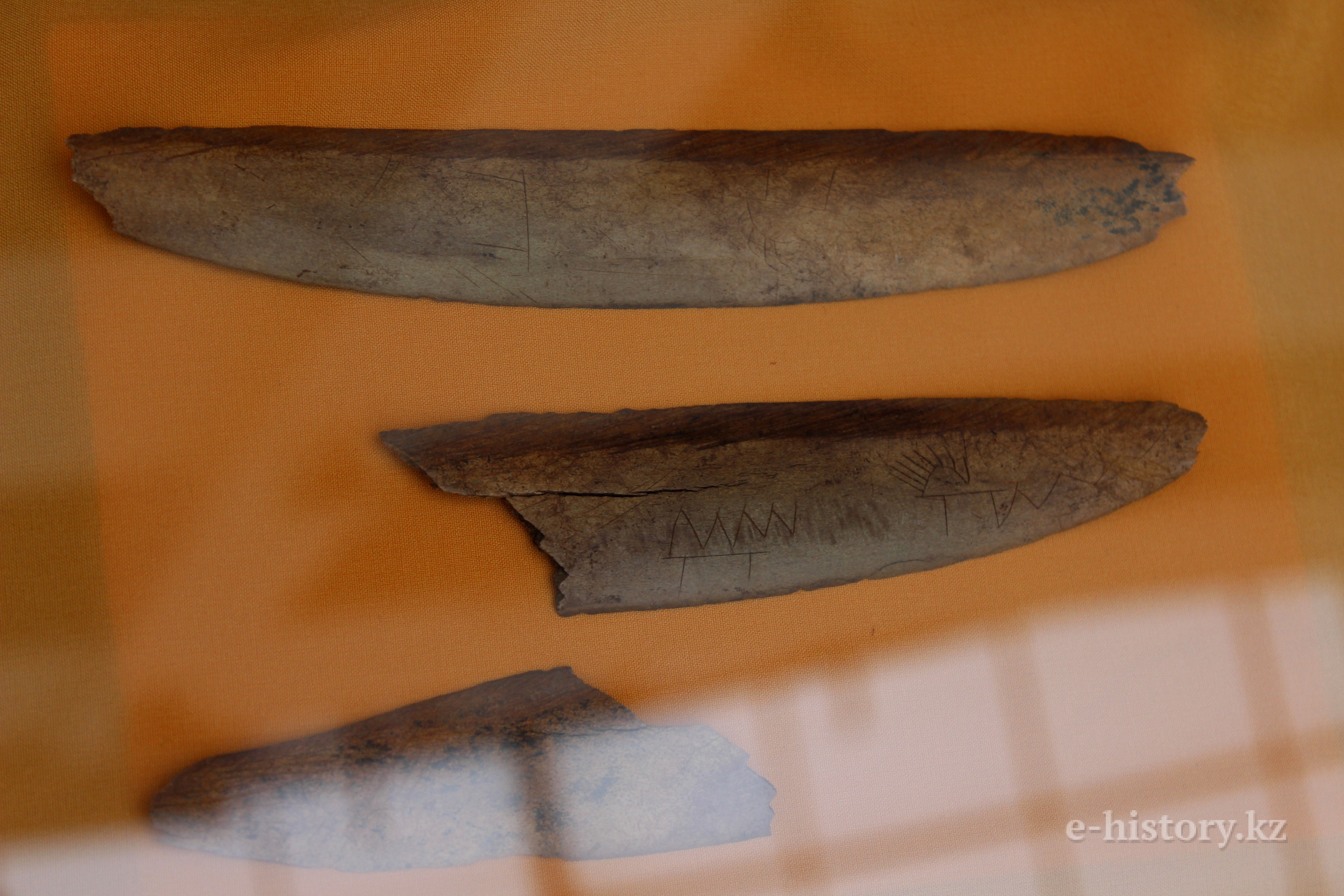