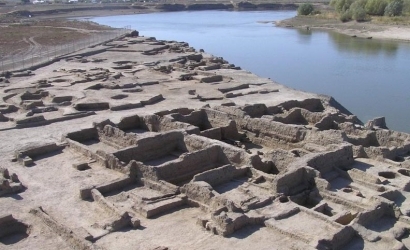 Sarayshyk is located on the bank of the Ural River, the waters of which have eroded a big part of the city. According to the Arabic sources of the 11th century

During the first meeting in the Atyrau region, the specially created commission decided as to how to preserve the remnants of the ancient city Sarayshyk that could disappear from the face of the earth in the coming years.

Sarayshyk is located on the bank of the Ural River, the waters of which have eroded a big part of the city. According to the Arabic sources of the 11th century, the city of Saraijuk corresponds to the medieval town Saksim. The rapid development of the city has happened between 13th and 14th centuries, when the city was a major trading center of the Golden Horde in the way from Europe to Central Asia and China, which was followed by caravans. In 1395, the soldiers of Timur destroyed the city of Sarayshyk later, in the 15th century, the city was rebuilt and became the residence of the Nogai Horde Khans, and then the first capital of the Kazakh Khanate. In 1580, the city was destroyed by the Cossacks and since then stays deserted.

For many years, a famous archaeologist Zeinolla Samashev seeks the way to attract the attention of the responsible public officials to this issue. It seems that the problem will be solved this year. According to the Deputy Mayor Shyngiz Mukan, the head of the region Baktikozha Izmuhambetov took the issue to the Government; as a result, the Ministry of Culture and Information has created a special commission, the first meeting of which was held in Atyrau. The commission consists of the representatives of central and local authorities and scientists: the Deputy Chairman of the Committee of Culture of the Ministry of Culture and Information, Alia Abeldinova, the Head of the same ministry, Bazarbay Altayev, the representatives of the Ministry of Agriculture, Abilda Daurenbek and the Ministry of Regional Development, Kuanish Kiyashev, the Ministry of Transport and Communications, Saduakas Agytaev, the Deputy Governor of region, Shyngiz Mukan and Timurzhan Shakimov, the director of Astana branch of the Institute of Archaeology named after A.Margulan, Zeinolla Samashev, the head of the Ural- Caspian Basinal Inspection on the regulation of the use and protection of water resources Biesen Kuanov, and the employee of this inspection, Salauat Sarin.

Zeinolla Samashev suggested two options for the committee, the first one is to strengthen the bankof the river and change its channel. In the forties, after the flood, the river has taken a different direction, bypassing the settlement. However, the experts have considered this decision too costly. Therefore, the most appropriate way is to conduct a bank protection works.

"But first we need to carry out the further excavations along the coastline in order to preserve cultural artifacts of several cultural layers," - said Zeinolla Samashev, expressing hope that they can find the necessary funds.

The Commission visited the city, where, after the discussion with the invited experts of the construction industry, decided to wait for the conclusion of competent persons and then prepare the necessary construction documents; the money has already been allocated to its realization.

Use of materials for publication, commercial use, or distribution requires written or oral permission from the Board of Editors or the author. Hyperlink to Qazaqstan tarihy portal is necessary. All rights reserved by the Law RK “On author’s rights and related rights”. To request authorization email to mail@e-history.kz or call to 8 (7172) 57 60 13 (in - 1163)
Қазақша Русский English
MOST READ
Month Year
Burial mounds of the southwestern part of the Semirechye region
Union of the Archives and Library
The referendum on the Constitution is a significant stage of democratization
Heroic mothers of the great steppe
Philosophy of the Emblem
14 monuments at Tekturmas
The rural akims: the country's hope is in the elections
Kazakh historical drama Tomiris premiered in Istanbul
Stolypin about the worries and hopes of immigrants to the Kazakh steppes
ALASH IDEA IS THE PROTECTION OF KAZAKH STATEHOOD
A tireless explorer of the Kazakh land
SWITCHING TO THE LATIN ALPHABET – UNITE ALL KAZAKH PEOPLE
Kunaev Dinmukhamed Akhmedovich
People who eat horses will kill you
Kazakhstan's participation in the Winter Olympics has a long history
Materials on theme
The story of one photo. Zholdas Dushambayev
Recent history of theatre life in Kazakhstan
New documentary film about the President of Kazakhstan presented in Astana
The National Museum starts celebration of Nauryz Meyramy