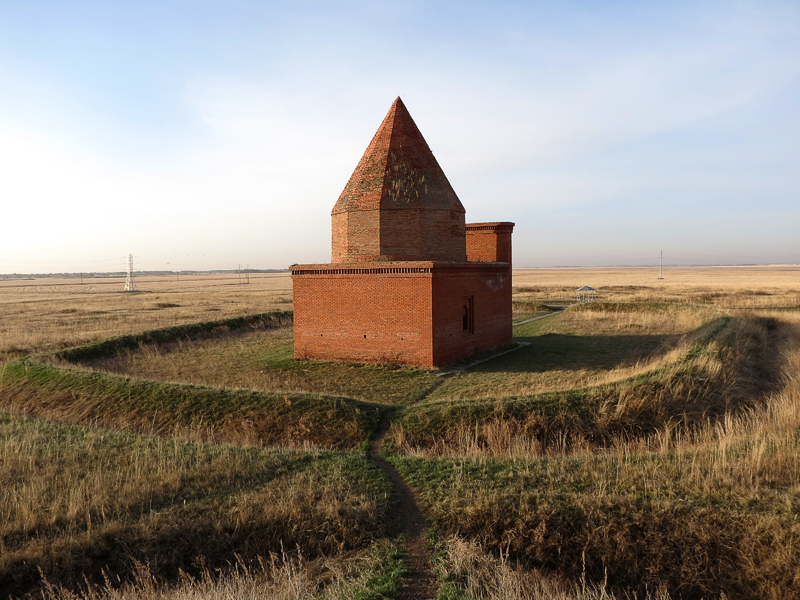 The beautiful heritage of the architectural art of our people - Kesene, is located in the border area of the Kostanay region with Varna district of the Chelyabinsk region of the Russian Federation

It should be noted that close to Varna are such settlements as Paris, Berlin, Leipzig, Kassel, Fershampenoise, Trebiya, Katsbah, Kvarken, Kulm, Adrianople, Brent, Novi, Arsi-Sur, Warsaw, Chesma. How did the land of our ancestors become known differently? It's also an interesting question. 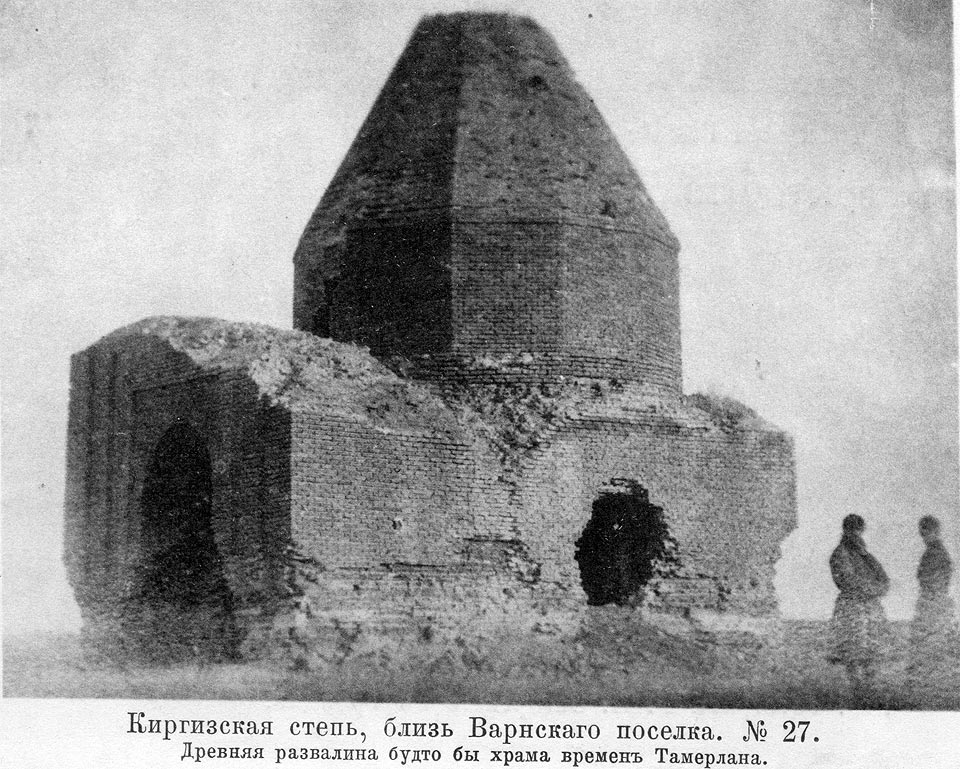 Before the restoration in the 1980s, the Tower looked like this

Russia during the Russian-Turkish or Russian-French wars in honor of the victory over them, renamed the names of cities and settlements, eradicating the Kazakh names of those localities. These places were inhabited by Nogaybaks (baptized) - Orthodox Tatar Cossacks. Initially, these lands belonged to the Kazakhs of the Middle Zhuz. During the conquest of these lands by the Russian Empire, local residents were forced to abandon their lands or were exterminated. In Russia, local residents call Kesene sometimes the Tower of the Emir Timur.

It should be noted that Russia, going to the East, mercilessly destroyed our historical monuments and relics, but on the territory of Russia, one of the three unique monuments of the Golden Horde period, this is Kesene, is preserved. Such monuments belonging to the epoch of the Golden Horde occur in Ufa (Chishma, Bashkortostan) and in Kasimov (the old mosque, Ryazan region), Elabuga (mausoleum, Elabuga, Tatarstan) and in Bolgar (remains of the mosque, Tatarstan). There is information that, Ivan the Terrible after taking Kazan, heading to the East with his followers, destroyed all the stone structures encountered on the way. And what will the legend tell us about Kesene? According to the Kostanay researcher Akylbek Shayakhmet, the Tower of the Emir Timur is visible from afar. This historical monument is a mausoleum built by a cruel ruler for his daughter.

According to folk legend, during the campaign of Timur against the Khan Tokhtamysh, amid the reed lake near the local Kazakh cemeteries (or rather, our ancestors’), the Emir's daughter was torn to pieces by the tiger. Lame Timur built a mausoleum for his daughter, the bricks were delivered for forty kilometers (this is the original Kazakh land, was taken away in 1742, later known as Munanai, today's city of Troitsk). Then the soldiers of Tamerlane lined up in a chain and passed each other bricks. Now, as for the Tower, the monument named "Kesene" is located three kilometers east of the village of Varna, on the bank of a reed lake called "Great Kesene". 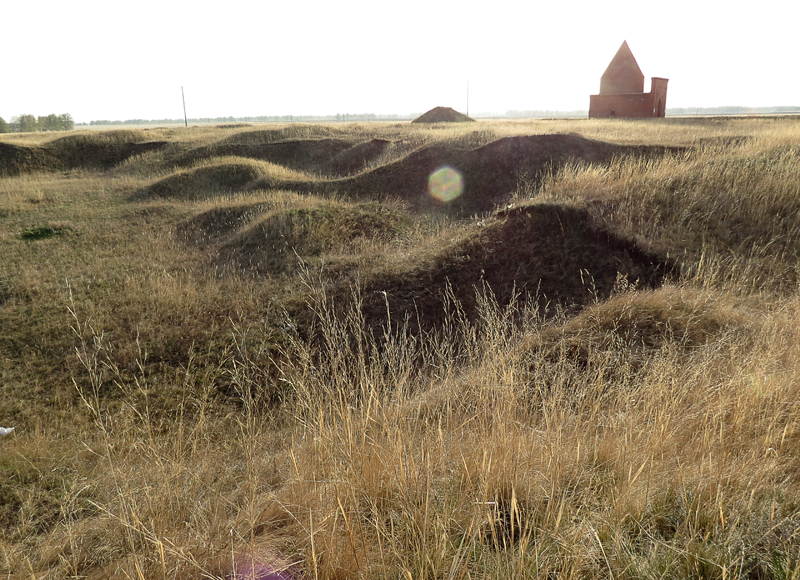 The height of the Tower is 17 meters. By the way, here there are more than 700 burials, from the Bronze Age to the Golden Horde, the Kazakh Khanate. A moat measuring 57.0 x 72.0 meters was dug around the Tower, for what it was dug is unknown. The tower is rectangular, decorated with ornaments. The dimensions are 12.30 x 9.40 meters. By the way, Kesene consists of a whole complex, and not only from one mausoleum, there are about 150 barrows of the late Middle Ages, six mounds of the Bronze Age, one mound of the early Iron Age. And the Tower, built for a woman, is a monument of the XIV-XVI century.

One of the features of such a long-term preservation of the monument (the Tower) is that during the construction a special technology was used. The brick consists of red clay, eggs of wild birds and camel's (sometimes goat’s) milk; bricks were fired on the bank of the river Ui, and were brought from far away. The tower was restored in 1980; in 1985 the construction was completely finished, while the monument was given the status of the Russian State Monument. Perhaps one of the reasons for the safety of the Tower is that the structure is surrounded on all sides by a swamp. The entrance is paved with cobblestones. Although the new bricks have also updated the monument, but have not added the appearance, on the contrary the Tower from the inside proves that the building is an ancient structure. 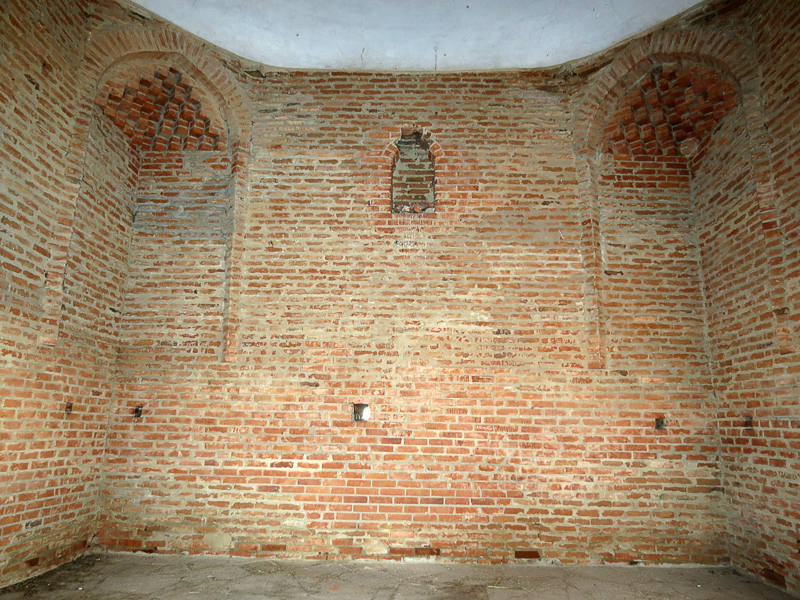 Tower from the inside

As for the study of the Tower, it should be noted here that the Russian explorer Captain P.I. Rychkov, then ethnographer R.G. Ignatyev, and Professor E.Yu. Petri made notes about it. If one of the two named researchers says that the tower was built by representatives of an unknown civilization, then another says that it belongs to the Kazakh people. And the last researcher led the excavation of the Tower. A female burial was discovered, covered with planks. In the burial were found the remains of silk fabric, two gold rings with Arabic script and two earrings in the form of a question mark. By the way, it is interesting that 10 of 18 objects that are included in the heritage of historical monuments in the Chelyabinsk region belong to the Kazakhs and Bashkirs. We can say with certainty that other monuments related to the history of antiquity of those regions are also our monuments. So, the heritage of cultural monuments is the Kesene complex, and in it the Tower, tells about the culture of our people. We almost forgot one detail: on the coat of arms and the flag of the Varna district of the Chelyabinsk region, the Tower is depicted.