Koumiss - a drink of health 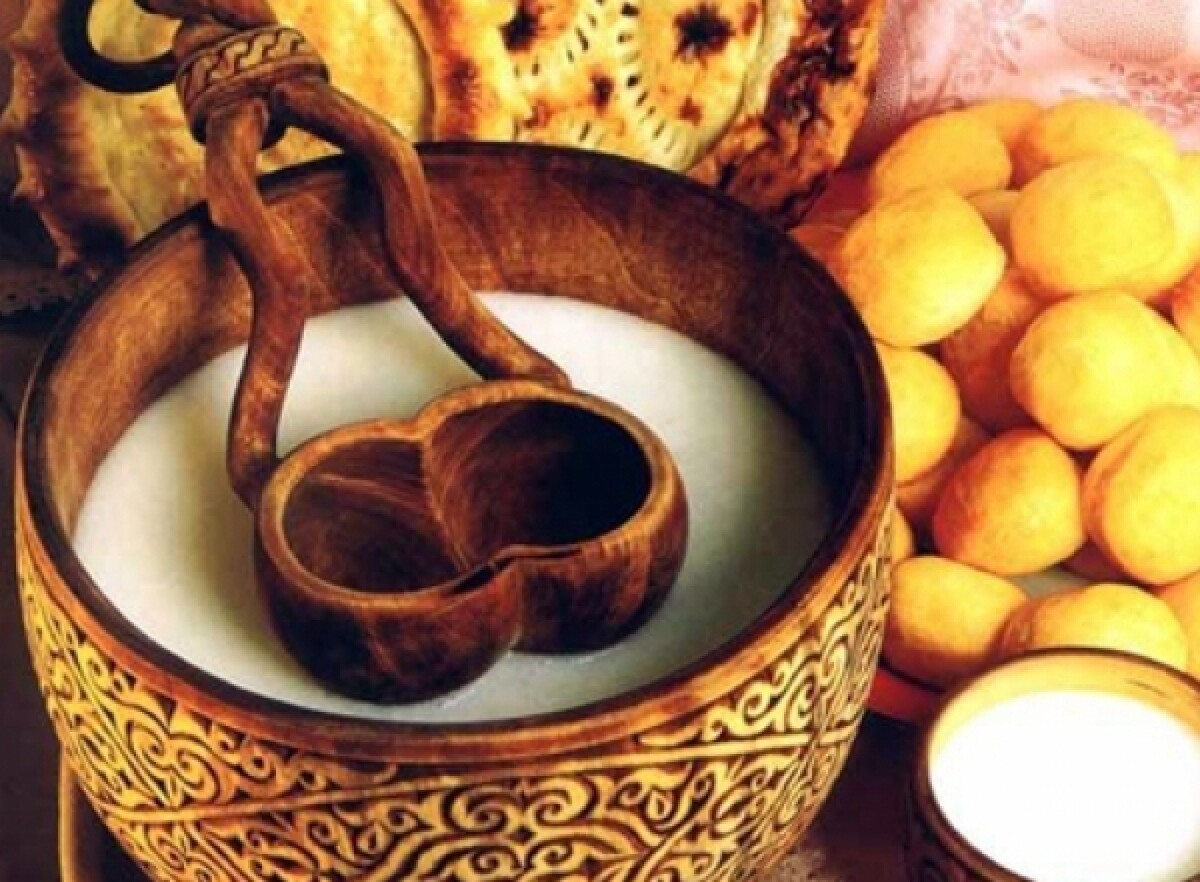 Koumiss is the national drink of the Turkic peoples. This is a kind of acid mare milk of transparent whitish color

Koumiss is the oldest product of horse-nomadic civilization of the Great Steppe - the steppe zone of Eurasia, stretching from the Black Sea to the Pacific Ocean. Kazakh traditional medicine from ancient times referred this product to health drinks, as well as a means to cure consumption - koksau (pulmonary tuberculosis). The fact is that the Western Steppe (part of the Great Steppe from Altay to the west) is a natural focus of this dangerous disease of man and farm animals. Domestication of livestock has led to the spread of this disease in the human population and its spread throughout Eurasia, and then throughout the world. Even in our time, tuberculosis accounts for more than half of all deaths from diseases, especially in backward countries.

The European scholars of the 17th-18th centuries naively believed that the inhabitants of the Great Steppe do not have tuberculosis, and, accordingly, do not know about its therapeutic effect. But they did not suspect that the steppe civilization survived in the fight against tuberculosis, the eternal companion of horse nomads, only thanks to koumiss and other sour-milk products. A multi-thousand-year mutual adaptation of the tubercle bacillus and steppe population took place, with their sour-milk culture as a protective system of powerful microbial symbioses. Therefore, the manifestations of this disease in an open form in the Steppe are quite rare. However, getting into other countries tubercular bacilli, without meeting the usual counteraction of sour-milk culture, becomes aggressive. And, not only Europeans, but also people from the Steppe leaving for Europe, switch to the local diet and often get tuberculosis in an open form. In this case, it's not about the meager supply of visitors. So the son of the Khan of the Middle Zhuz, Shokan Ualikhanov, living in St. Petersburg could afford any excess diet, but he ate in the European system, as a result fell sick with tuberculosis.

The disease did not spare either the lower or aristocratic circles of Europe. And the ancient steppe knowledge of the only means of treating tuberculosis at that time came to Europe from around the 17th century through travelers and explorers of steppe culture on the one hand, and because of direct contacts of the population of European peoples with the Steppe on the other. For example, in the northern forest-steppe zone, Russian crusaders traveled to the Bashkir lands in the late 17th century to be treated with koumiss from consumption (according to P.S. Pallas). And in the steppes of the Volga region peasants came to recover from illnesses, temporarily living in kibitkas of Kyrgyz (Kazakhs) to acquire koumiss (memories of N.V. Postnikov). The middle of the 19th century in Europe is characterized by a powerful development of science and medicine. Therefore, almost simultaneous opening of the world's first scientific anti-tuberculosis koumiss resorts in Russia in 1858 (N.V. Postnikov in Samara) and Germany in 1859 (the health resort of Bremer in Gebersdorf) is not accidental.

The most wild and ancient resorts were seasonal migrations of steppe inhabitants to jailau (high mountain pastures). During this period, Kazakhs could switch to food only by koumiss, and this, in fact, the absolute "koumiss diet", incidentally, is extremely useful for health. At the same time, they could drink from 15 to 18 liters of koumiss per day. However, the very first, European-organized, koumiss health resort, or "sanatorium" in the Kazakh steppe was a wooden palace at the summer rate of Khan Zhangir, built in 1841. Before it, stationary buildings for summer rates of steppe rulers have never been made. Zhangir built a luxurious for those times, specially designed pavilion, similar to the same structure built in its winter rate. Zhangir dedicated both buildings to his beloved second wife - the beautiful Fatima, the daughter of the Tatar mufti. Since she never lived in a yurt, the khan noticed that she feels uncomfortable there. Khan, being by nature a reformer, began with reorganizing his home in a new style.

Specifically, Khan Zhangir tried to do everything according to the European pattern, in the style of the early European palace and park ensembles. Even his office in the winter rate reminds the cabinet of Peter I in Monplaisir, executed in the Dutch style. Accordingly, very carefully places for rates in view of the creation of forest park zones were chosen. So to select the place of the winter rate, Russian geologists were invited to find the areas with the groundwater closest to the surface. In the summer rate area, plantings were conducted in the natural lowlands of the flood plain of the Torgun River; these areas were flooded during floods. Moreover, the Torgun area, due to the peculiarities of the relief, is the birthplace of inundative method. Simultaneously with the construction of the summer palace rates in 1841 on the territory of the Bukey Horde, the first two dams of the Savinsk and Khan inundative systems were erected. The latter served to irrigate the territory of the Khan Summer Palace. For gardening, Khan Zhangir subscribed seeds and seedlings of oak, birch and elm from the Orenburg governor.

In both rates, depending on the season, the khan treated guests to koumiss, and even such drink as champagne. Foreign guests, as well as aristocratic and imperial people from Russia were incredibly surprised. For example, Khan Zhangir was visited by the famous Russian writer S.T. Aksakov who gave a flattering assessment of the Khan's personality, and also mentioned refreshments by koumiss and champagne at his rate.

For some time, Fatima was sick, and Zhangir drove her to mineral waters, and treated her in his summer rate with koumiss.

Some of the preserved Kazakh legends are curious about this. For example, about the existence of a "sugar lake" near the palace of Khan Zhangir into which sugar was poured to attract swans. Apparently, this lake Kolborsy at the summer rate, on the shore of which as bait for swans they could really pour the chopped sugar "nauat". There was also a legend about how Zhangir Khan cured his beloved wife koumiss, which is confirmed by the factual material about her illness and treatment. The origin of modern koumiss resorts created at the site of the summer rate, the legends associate with the production of koumiss under the Khan Zhangir. The same is said about the popular name of the existing sanatorium: Koumiss-Horde - literally, "koumiss (khan's) rate".

Thus, by all criteria: the presence of a forest park, a lake with a beautiful view, a comfortable pavilion for housing, the availability of koumiss in the place of production, the availability of visitors to rest, or treat guests - the summer khan's rate of Zhangir Khan fits the definition of a koumiss sanatorium.

Therefore, it can be said with certainty that, in fact, the khan's summer rate Koumiss-Horde, being a private resort of Khan Zhangir, was established in 1841 and was not only the first Kazakh koumiss resort, but in general the first koumiss sanatorium in the world. Moreover, later it grew into the first prerevolutionary Kazakh koumiss resort of Shangerey Bokeyev - grandson of Zhangir Khan. And after the revolution, it became one of the first Soviet koumiss resorts, organized by Kildibek Akhmetgali who was a koumiss master in both the last resorts.