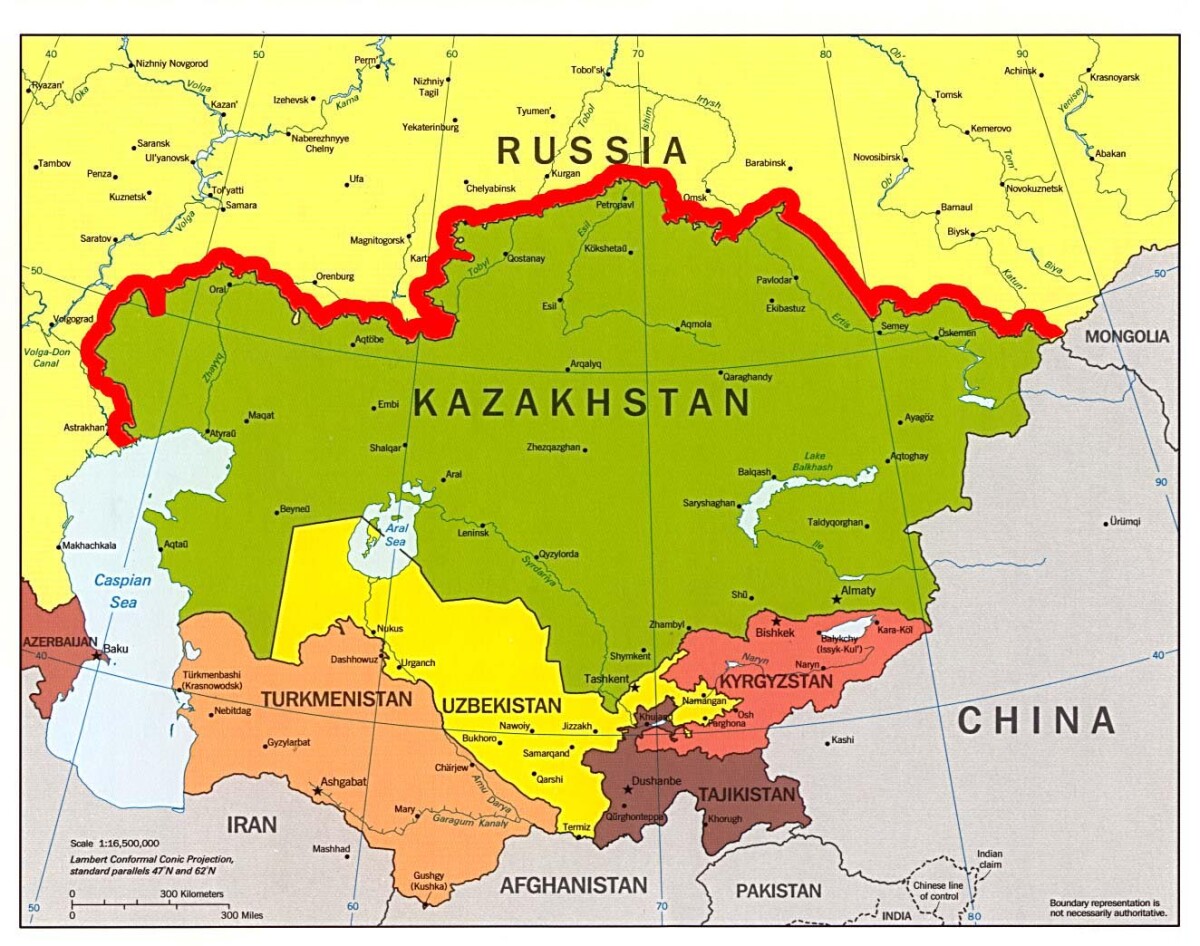 Kazakhstan began to pursue an independent foreign policy only after the acquisition on December 16, 1991 of independence. Since that time, the republic has entered the world arena as a full-fledged subject of international law.

Cross-border cooperation between Kazakhstan and Russia develops in parallel with the history of their political and legal relations. The beginning was laid by Abulkhair Khan, who took the decision to recognize the Russian protectorate. In 1731 the Younger Zhuz, and later, in 1734, the Middle Zhuz took Russian citizenship.

This decision coincided with the plans of the Russian Empire, its desire to expand its territory and reach the advantageous trade routes of Asia and start developing the riches of the Kazakh steppes.

After the October Revolution of 1917, Kazakhstan had a chance to restore its territorial integrity. However, neither the Decree of the All-Russian Central Executive Committee nor other documents acting at that historic moment specified the boundaries. Even the national-territorial delimitation of the Central Asian republics, conducted in 1924, in no way touched the border between Kazakhstan and Russia. Thus, the formation of a new union republic (Kazakh SSR) within the USSR was not accompanied by clarification and legal registration of the administrative-territorial boundary between KazSSR and the RSFSR.

In addition, the Kazakh-Russian border since the formation of the Kazakh Autonomous Soviet Socialist Republic in 1920 has undergone many changes, often carried out by agreement between economic entities and then approved at the interregional level, but this did not happen in all cases. During the existence of the USSR, internal administrative-territorial borders were not serious restrictions in economic activities and population distribution, and the current realities did not always correspond to the border line fixed on the maps.

The problem of delimitation of the Kazakh-Russian border acquired special importance after the state independence of the two states was acquired. Cooperation in the protection of borders is based on Art. 10 The Treaty on Friendship, Cooperation and Mutual Assistance between the Republic of Kazakhstan and the Russian Federation of May 25, 1992, which defines recognition and respect for the territorial integrity and inviolability of the existing borders of both states. The parties undertook, in accordance with their legislation, to prohibit and suppress the creation and activities on their territories of organizations and groups, as well as the actions of individuals aimed against the independence and territorial integrity of Kazakhstan and Russia.

The first bilateral document in the field of border relations was the Agreement between the Republic of Kazakhstan and the Russian Federation on cooperation and coordination on border issues of 25 February 1993, which became the basis for all subsequent agreements on border issues.

The agreement defined the goal aimed at implementing measures to ensure a stable situation on their external borders, identifying specific areas of cooperation and interaction of border troops on a set of issues related to the protection of their external state borders. The Agreement defined a wide range of issues related to the material and technical support of the border troops of the Republic of Kazakhstan and the Russian Federation, the training of officer cadres and their social protection, and information interoperability.

During the years of cooperation between the Republic of Kazakhstan and the Russian Federation in the border area, a strong legal basis was laid and a real strategic partnership was implemented, ensuring stable development and security for the two states. However, the need to delimit the Kazakh-Russian state border, as K. Tokayev, the Kazakh foreign minister noted, was dictated by the fact that the line of its passage between Kazakhstan and Russia never had a legislative description. This circumstance made it difficult for frontier units and other law enforcement agencies to ensure proper control over persons and goods crossing the border, as well as in the establishment of a barrier to economic smuggling, drug trafficking and illegal migration.

Let us note that the border between Kazakhstan and Russia is the longest continuous land border in the world - 7 591 km.