Director of the Institute of History of State publicly reported

For the first time National Digital History portal publishes a public report of the head of the Institute of History of State.

17 February, 2017 at the House of Ministries was held a public report of the director of the Institute of History of State MES RK, Doctor of History, and Professor Burkitbay Ayagan for 2016 to the scientific community.

The Director and Professor B.G. Ayagan reported in detail on the results of the 2016 academic year activities and tasks set for 2017. The report was accompanied by a presentation on the results of the Institute of History of State activity, prepared by the academic secretary, candidate of historical sciences A.Zh. Gabdullina. 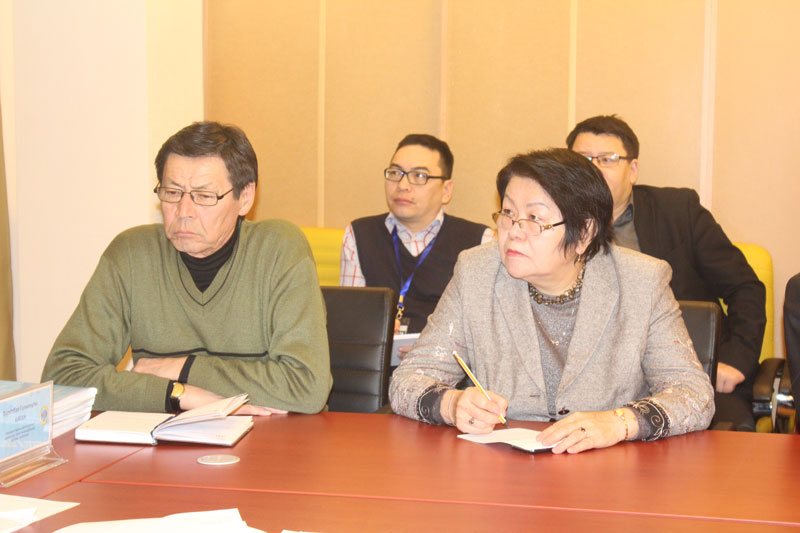 Goal and Objectives of the Institute

The goal of the Institute - scientific and analytical understanding of the process of creating an independent state, the formation of public and historical consciousness, as well as theoretical basis of the history of modern Kazakhstan.

Tasks of the Institute:

- The formation in modern society state and historical consciousness, responsible strategy of the state and aimed at creating conditions for the development of the nation;

- Analysis of the historical and cultural heritage of the Kazakh people in the context of strengthening the state independence;

- Development of theoretical problems of the history at the level of the global social and humanitarian sciences;

- Use of the achievements of modern historical and social sciences and humanities in the interests of the formation of patriotism;

- Development of theoretical and methodological principles of the study of modern history.

SI "Institute of History of State" CS MES RK consists of four academic departments: Scientific Information; national history; source study and historiography; industrial-innovative development and ethno-social processes; Eurasianism and Comparative Political Studies. A team made 6 basic and 4 applied research projects funded under the program 217 "Development of Science" sub-program 101 "Program-oriented funding subjects of scientific and / or technical activity", with implementation in the 2015-2017 period. Topics of existing projects are relevant to topics of research projects aimed at implementing the priorities of the Republic of Kazakhstan President's Address "Strategy" Kazakhstan-2050" - a new policy of established state" and cover the key issues of the scope of internal and external policy of Kazakhstan.

As of 2016 were published 218 books and other publications. It includes:

-The collection of documents and materials – 1

-The Scientific Journal "Memleket tarikhy. The history of the state"- 4

-The materials of scientific conferences – 3

-Publications in the framework of basic and applied researches – 55

-Articles in scientific journals – 22 including:

-Publications in international and national conferences – 41

Scientists participated in a number of conferences of national and international level. Among them are:

1. Participation in the organization and conduct of the republican scientific-practical conference "Kazakhstan's way of formation and development of statehood: the results, achievements and perspectives" - 14 January, 2016.

2. Participation in the organization and holding of a round table devoted to the 150th anniversary of A. Bokeykhan "Alikhan Bokeykhanuly - Tauelsizdik zharshysy" - May 19, 2016.

The team of scientists of the Institute of History of State with foreign scientists after the scientific conference. Astana, December 9, 2016

Ongoing research projects at the Institute have clear access to the practical implementation and innovation in 2017; the expected results of investigations have social, economic, socio-political and socio-cultural impact and demand in society. They meet the needs of the state and society, resulting from the tasks set by the Head of State in the President's Message to the people of Kazakhstan "The third modernization of Kazakhstan: global competitiveness."

Scientists prepared a new research and development: 3-volume scientific edition of "Modern Kazakhstan", monographs and a collection of documents and materials.

Upon completion of the planned research is provided preparation of the reports on the research work and the output of the following products:

Ongoing research projects are focused on the execution of tasks to ensure a qualitative leap of history, renovation methodology, expand the source base and research tools in accordance with the trend of historical science and in general socio-humanitarian knowledge in the world.

At the end of the meeting the public report of the Institute of History of State SC MES RK Director, Doctor of History, and Professor Burkitbay Ayagan was considered satisfactory, and was approved unanimously.

Academic secretary of the Institute of History of State