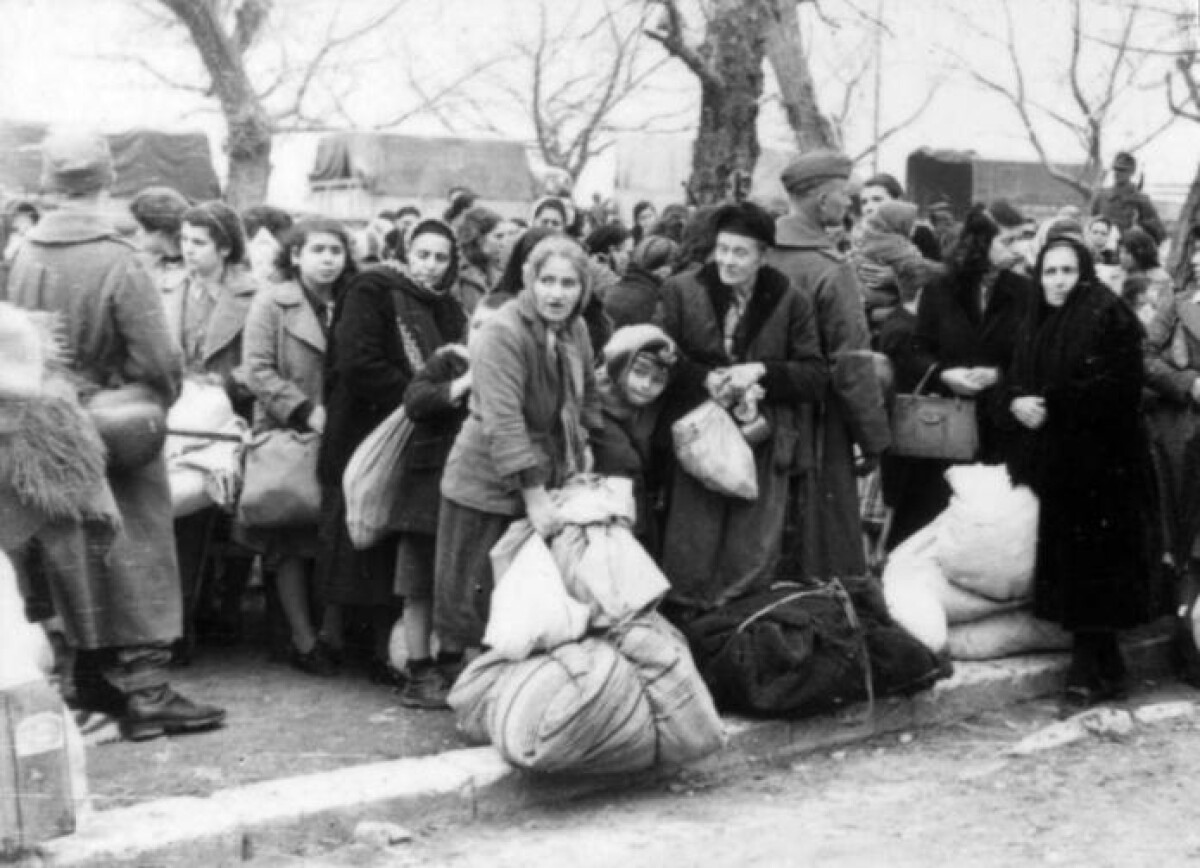 One of the tragic events of the Second World War is the deportation of peoples and ethnic groups. Kazakhstan became a kind of reservation for the evicted people

By the autumn of 1942, German troops came close to the banks of the Volga and the spurs of the Greater Caucasus mountain range. Under the occupation of the invaders were partially autonomous republics of the North Caucasus: the Checheno-Ingushetia, Karachayevo-Cherkess Autonomous Region, Kabardino-Balkar Autonomous Region, as well as the Kalmyk ASSR. Even in 1941, the territory of Crimean Autonomous Soviet Socialist Republic and the northern Black Sea coast was occupied.

After the defeat of the Nazis at Stalingrad and Kursk began a general offensive of the Soviet troops in the course of which was released a large area occupied by the enemy. In the autumn of 1943, Soviet troops reached the Dnieper. On the liberated territory simultaneously with the restoration work began isolating and tracing traitors and accomplices of the enemy. As it is known, during their retreat the Nazis left behind an extensive spy network and subversive groups. In the course of operations to rid the liberated territory of army troops and the NKVD were removed not only a large number of rifles and machine guns, and artillery pieces and mortars. This is evidenced by the number of confiscated weapons and ammunition in the Chechen settlements. However, the NKVD leaders sought not only in the behavior of individuals and groups, but also of entire peoples signs of crimes, contributing to the enemy. So was born the version of the guilt of individual nations sympathetic to the enemy during the occupation of their territory. Thus, under the pretext of a country at war was found contrived pretext for their deportation. 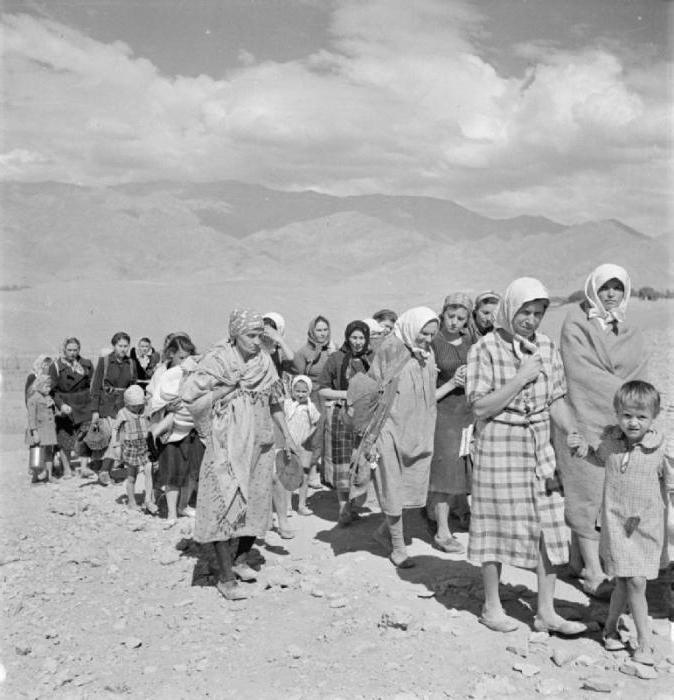 One of the first who was forced deportation were people of Karachay. These people had their own autonomous region. It should be noted that during the war Karachays actively participated in the battles with the Nazis. 15 thousand Karachay people for feats in battle were awarded orders and medals, and 6 persons became Heroes of the Soviet Union. However, the October 12, 1943 by the Supreme Soviet Presidium Karachay Autonomous Region was liquidated, and on October 14, was made a closed Decree of People's Commissars of the USSR on the eviction of Karachay people. In the short term were deported from the region 14 774 families with total number of 69 267 people.

Soon, the same fate befell the population of the Kalmyk ASSR. In accordance with the Decree of the Presidium of the Supreme Soviet of the USSR and the Decree SNK of the USSR on October 28, 1943 Kalmyks were deported to the eastern and northern parts of the country, as well as the Urals. In a short time were evicted 99 252 people. Of these, 648 families were located in the Kyzyl-Orda region. In the same period, while hatched the plan to evict the Chechens and Ingush from the North Caucasus, which was implemented in February 1944. 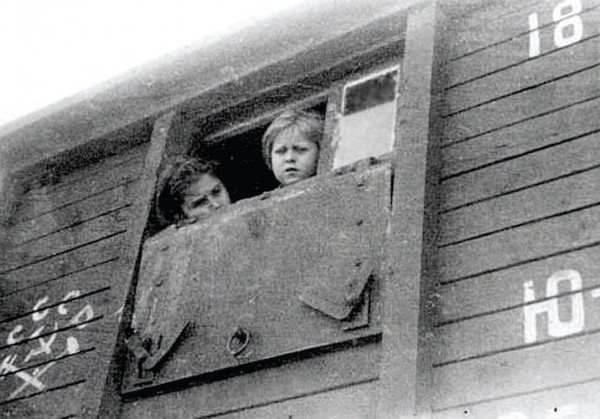 Long before the expulsion of these people their placement areas were identified. By the SCB decree as of 31 January 1944, it was decided to evict the Chechens and Ingush in the Kazakh and Kyrgyz SSR. This decision was kept a strict secret. February 21, 1944 by the order of the NKVD of the USSR the operation began.

Their eviction began February 23, 1944, and only on 7 March followed the decree of the Supreme Soviet of the USSR on the Elimination of the Chechen-Ingush ASSR. According to archive data, in October 1945, 406 375 Chechens and Ingush were taken in the republic.

The same tragic fate had the Balkars. March 5, 1944 it was decided to evict the Balkars by the SCB Resolution. A total of 4660 Balkar families arrived in Kazakhstan. After the eviction their republic was named Kabardian ASSR.

With the release of the Nazis occupied territory continued the eviction of representatives of formerly deported peoples. This primarily affected the German population. By the end of 1945, in Kazakhstan further were taken about 9000 families of Germans.

However, continued large stocks on evict of individual nations and national minorities, fallen under suspicion of collaboration with the enemy. In this case we are talking about the population of Crimea, as well as the fertile regions of Georgia inhabited by Turks. 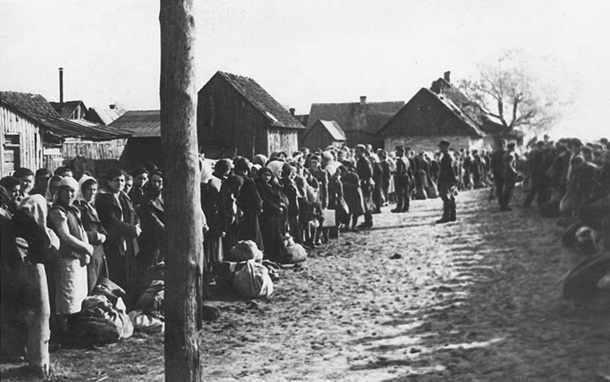 The repressive policy of the Soviet state against the small people played a tragic role in their lives. This applies in particular to the Crimean Tatars.

After the liberation of Crimea from the enemy, certain individuals from among the Crimean Tatars went to the service of the Nazis. However, all this was not taken into account when the Crimea became a bargaining chip between the allies of the anti-Hitler coalition. This applies primarily to the US and UK, which conducted a kind of game, using Soviet difficulties in the recovery of the economy in the liberated from the occupation of enemy territory, promising to help. Loans, of which the United States pledged in December 1941, were only the bait, and the subject of negotiations and bargaining between the USSR and the USA.

It should be noted that in 1957, when previously liquidated autonomous regions and republics were recovered, and their people were given the right to return to their homeland, the Crimean Tatars and Turks, as well as the Germans were not given the opportunity. Even after rehabilitation they had no right to live freely in their native places. 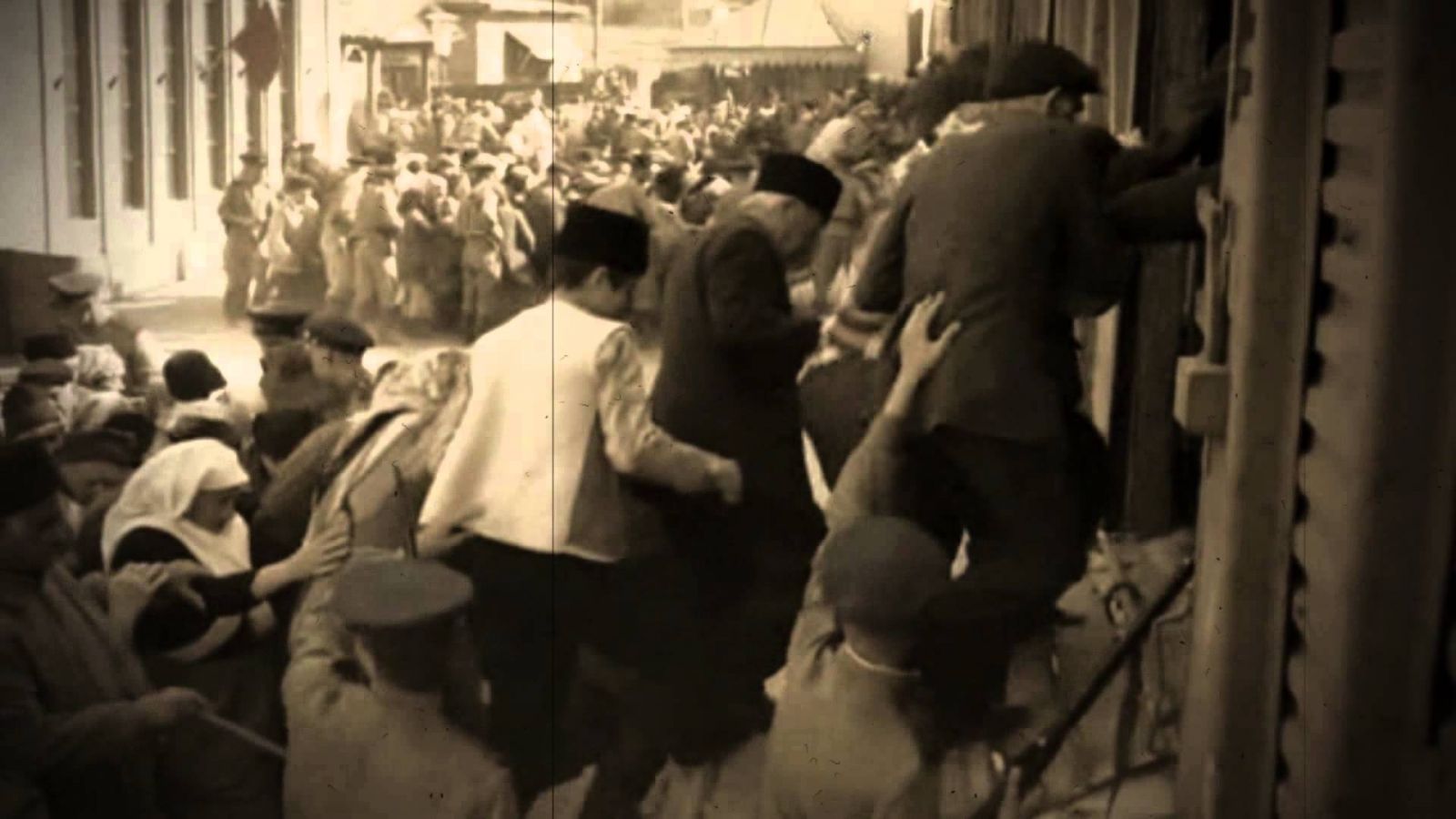 So, in 1944 the Crimean Tatar people were deported to Central Asia and Kazakhstan. The beginning of the action was ordered by L. Beriya from April 13, 1944 "On measures to clean up the territory of the Crimean Autonomous Soviet Socialist Republic of anti-Soviet elements", instructing as the liberation of the Crimea to restore local NKVD and NGKB authorities for "KGB operative work."

4501 people arrived in Kazakhstan. In addition, during this operation were deported to Kazakhstan about 7000 Bulgarians and Greeks.

The same fate befell the Turks who lived in the southern and south-western regions of Georgia. It should be noted that during the Second World War the territory of Georgia in general was not subjected to occupation by German troops. Therefore, the Soviet power could not accuse the Turks in aiding the Germans. However, by the SCB Decree of 31 July 1944, adopted stamped "Top Secret", the Government of Kazakhstan in a secret order in advance instructed to settle in the country of 40 thousand people from Georgia. Stalin and Beriya made the final decision of SCB on the eviction of the Turks and the Kurds as an afterthought - November 14, 1944.

It should be noted, because of the position of Turkey as an ally of Germany, which supplied them strategic raw materials and other products, the Soviet High Command was forced to keep large numbers of troops and military equipment on the border with it. Only in 1944, making sure that Germany was losing the war and would be defeated, Turkey broke diplomatic relations and formally was with it in a state of war, but in any military action was not involved. 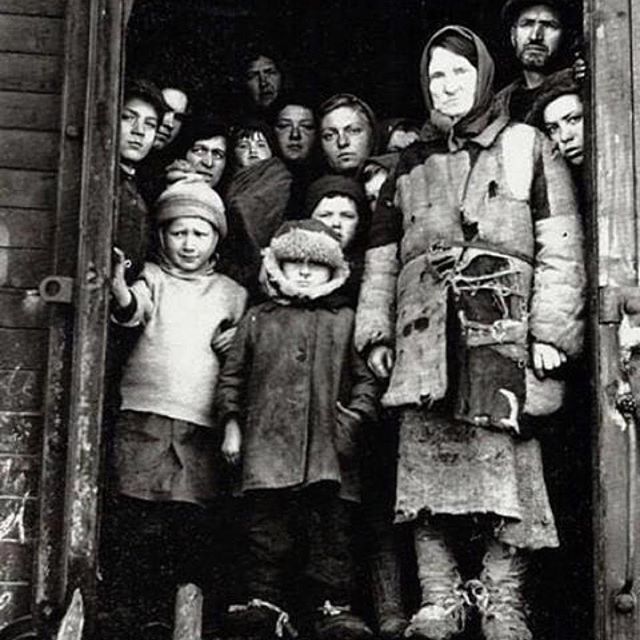 To the eviction then were subjected 115 thousand people living in Akhaltsikhe, Adigeni, Aspindza, Akhalkalaki and Bogdanov regions of Georgia. 27 833 Turks were deported to Kazakhstan.

The very deportation of peoples is a crime. With their eviction, according to a secret government regulations allowed to take no more than 200 kg per family baggage. In their former homes the evicted people handed over to the authorities their farm, cattle, property, food. In the corresponding receipts in populated areas they were entitled to compensation. However, this was not carried out.

In the archival documents found plenty of group complaints, statements of special settlers to the authorities for compensation for their abandoned property under the act. Another incident: in the archival documents were kept secret decree of the USSR government, prescribing the republican authorities activities "On the construction lending and quartering for special settlers." And these loans were given, and under compulsion.

Material and social position of special settlers during the war was very heavy. Local authorities and the population did everything possible to alleviate their plight. They allocated special funds, clothing, shoes, cattle, etc. However, the financial resources were not enough. Leaders of some areas and farms, special settlers’ funds allocated for other purposes. 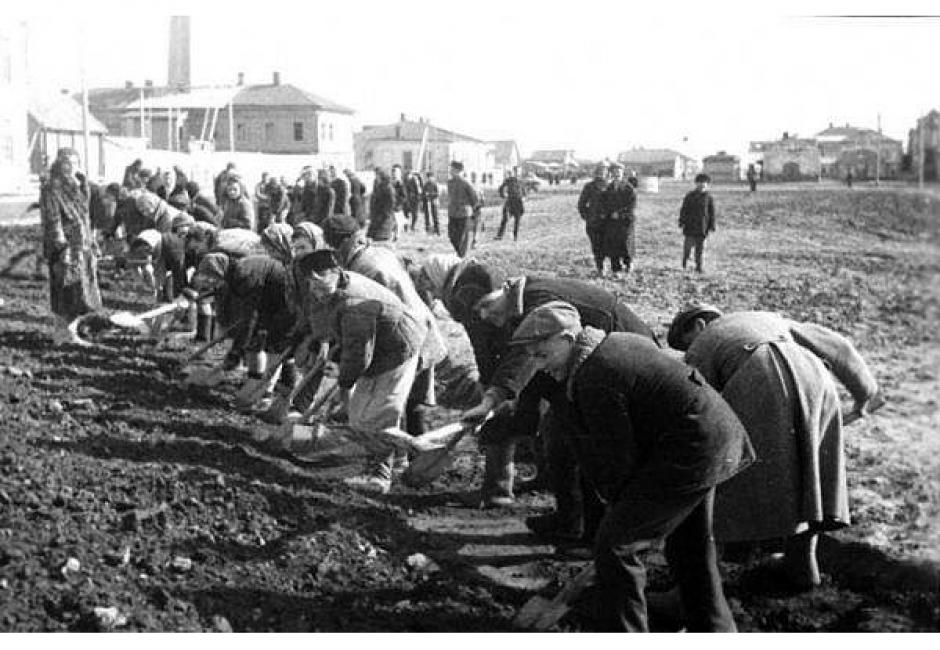 Deported people were sent to labor army. Despite the difficulties of war, the population of the republic greatly helped the deportees, who under the difficult circumstances died from disease and starvation.

In addition, it should be noted that forced relocation of the deported directed a large number of military units. It should be mentioned that to the eviction of the Chechens and Ingush in addition to all other costs and equipment were used to 120 thousand soldiers and officers of the NKVD, while the use of the troops at the front would save the lives of tens of thousands of Soviet soldiers. Thus, it is necessary to note one more glaring injustice: the entire male population (all the officers and men) from among the deported peoples were at the front, was withdrawn from the front and sent to the rear works. If infidelity caused a deep insult to the soldiers and officers from among the deportees, honestly fought on the fronts of the war, it caused the same moral and psychological damage to others, including those who died at this time on the battlefield.

Criminal acts of the totalitarian regime suffered a huge moral and psychological damage. Restoration of historical justice in relation to the repressed people in the Stalin period had not been completed. Only after the collapse of the Soviet Union in a democratic way, and compliance with all constitutional and legal norms become possible to speak the truth in respect of the deported people.