Dignified heirs of the Great Steppe 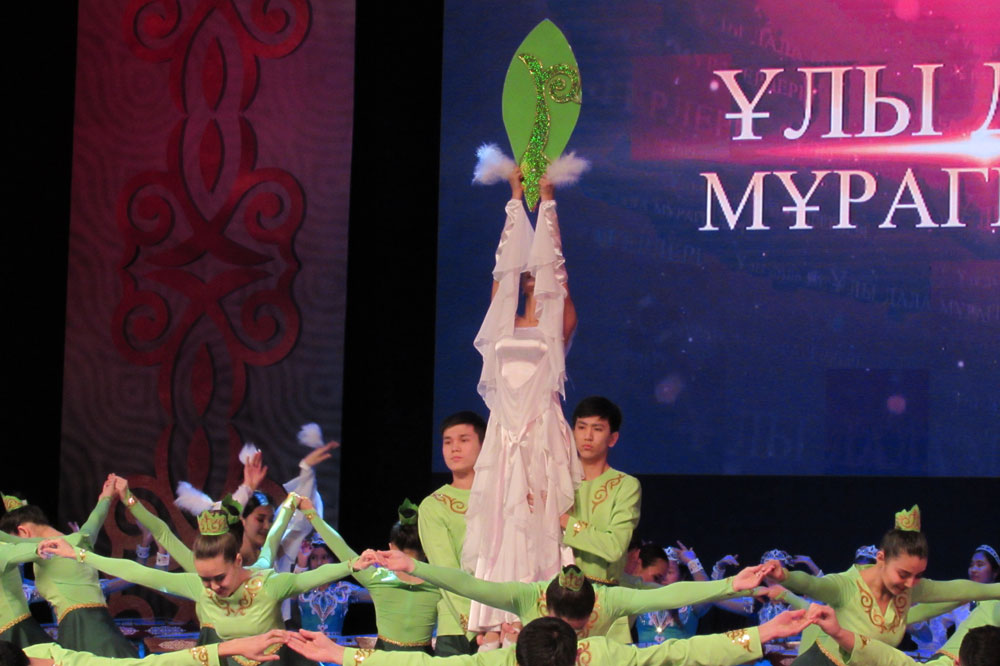 February 18, 2017 in the central concert hall «Astana» was held a creative report "Uly Dala muragerleri" - "Heirs of the Great Steppe"

Truly historic event took place in Astana. For the first time in seven years, 20 Nazarbayev Intellectual Schools presented for all to see a creative report "Uly Dala muragerleri" - "Heirs of the Great Steppe." In the central concert hall "Astana" gathered the best students of the Nazarbayev Intellectual schools from across the country. And of course, they arrived in the capital not alone, but accompanied by their teachers and parents. 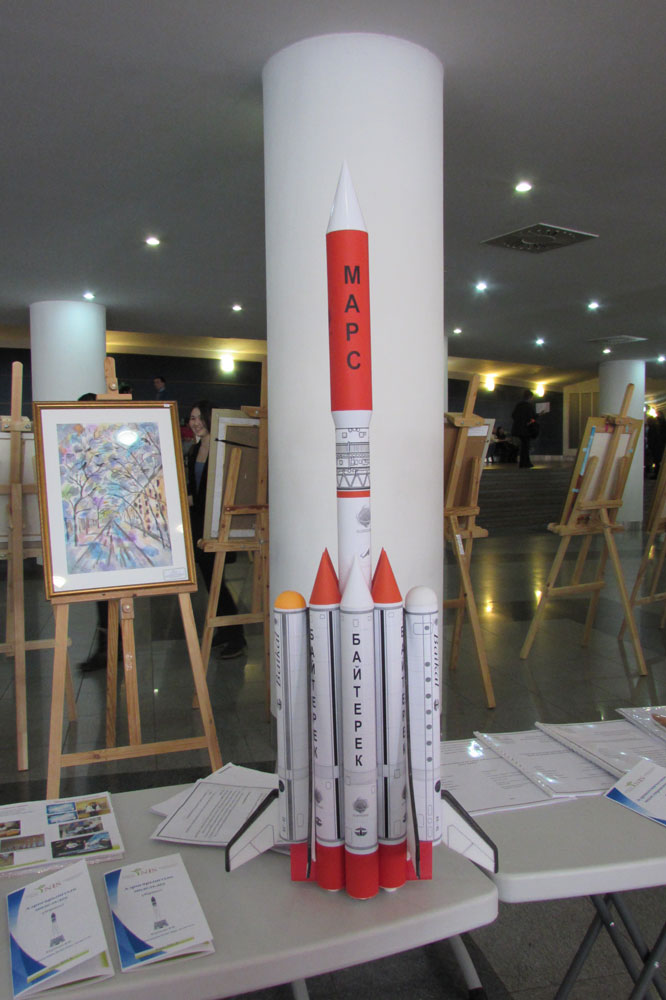 The presentation of program was intense - a seminar for teachers of Astana "Patriotic education of pupils in Intellectual Schools", an exhibition of research projects, also a charity fair.

At the exhibition of scientific projects were presented the most creative projects of Intellectual schools’ pupils. These are "Using modified natural clays for refining of vegetable oils" by A. Makasheva from Pavlodar, "Robotic orbital system for collecting debris on the Earth orbit" by B. Talgat from Taldykorgan, "Creating automatic mechanism to control work of wind power" by N. Turgumbayev from Petropavlovsk. "Electronic-computing complex", “Automated Content Management System «SmartLife»” by A. Adilbek from Kostanay, "Drone missile launcher and carrier rocket with a symmetrical structure" by S. Elaman from Taraz and others. 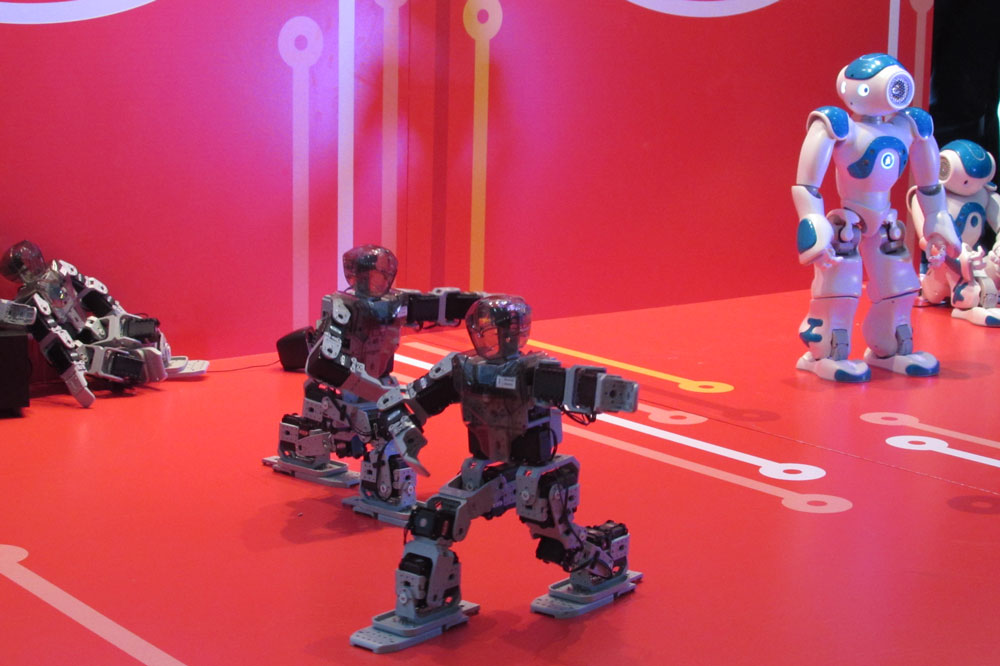 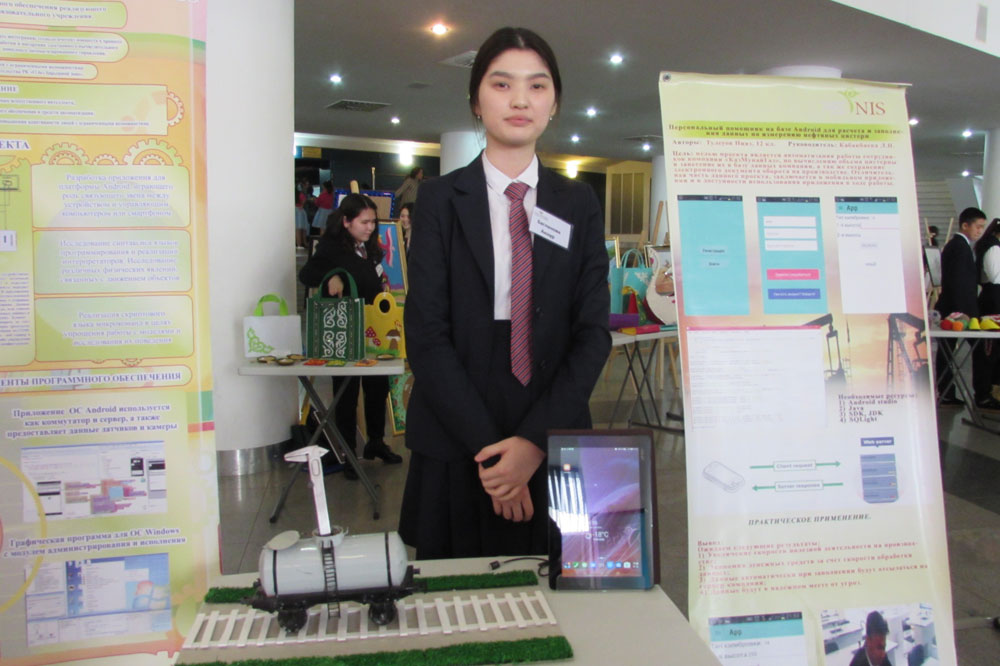 Huge interest in children and adults caused dancing robots. "Robotics" is one of the most popular elective courses among NIS students; here they revive interesting and creative ideas for the development and application of robots. Nazarbayev Intellectual Schools are implementing training programs of the elective course "Robotics" in secondary schools in the country.

An interesting work was presented at the IT stand. Baglanova Aknur, student of NIS PMD from Aktobe told about a unique project - a mobile application "Calculation of the volume of oil in the tank." This application is important for oil companies and takes into account the volume of oil filled in the tank, which allows early detection of leakage or theft of petroleum feedstock. 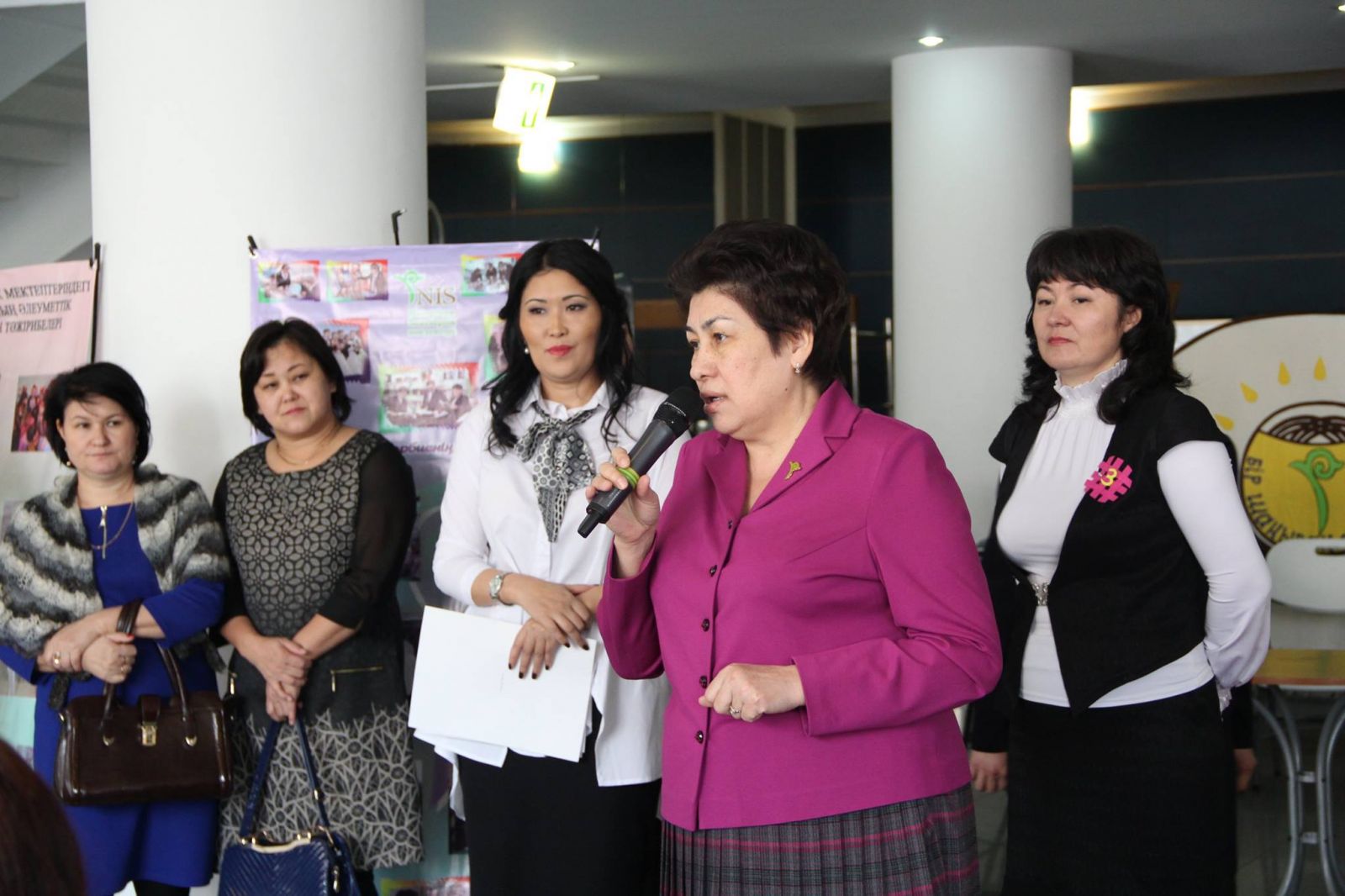 The event was opened by the Chairman of the Company "Nazarbayev Intellectual Schools" Kulyash Shamshidinova.

- We will demonstrate the many talents of our children, because in the Intellectual Schools basic courses are supplemented by a mandatory elective, we understand our responsibility for the harmonious development of the new generation - said K. Shamshidinova. 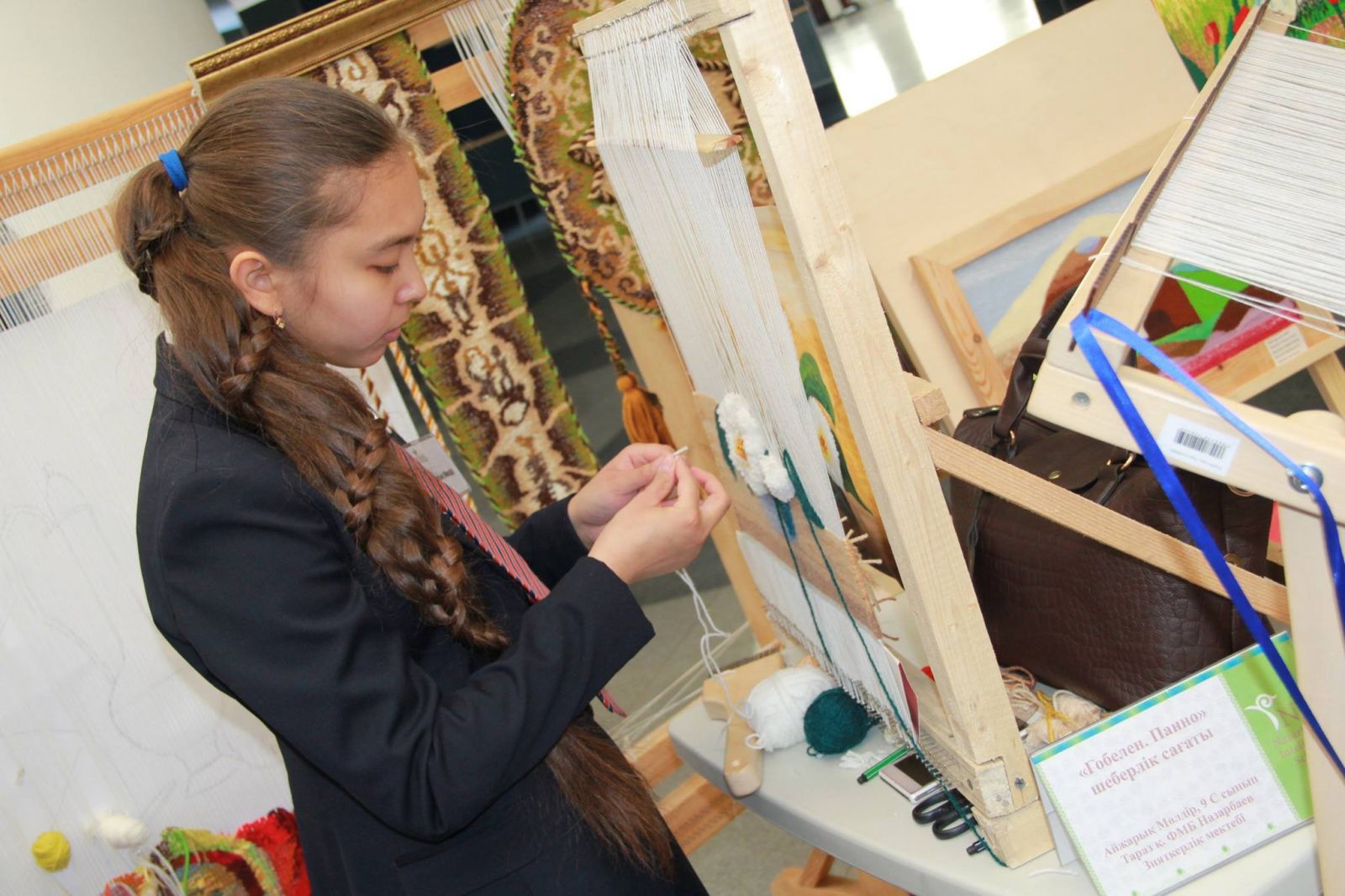 The event was attended by the ministers, parliamentary deputies, representatives of Astana akimat, the diplomatic corps and international organizations, heads of republican mass media, teachers and students of the capital's schools. Nobody remained indifferent to this event.

In the foyer of the concert hall was spread over a large charity fair "Street of craftsmen", which presented applied creativity of pupils of Intellectual Schools. There were pottery and carpet weaving, felting and embroidery. 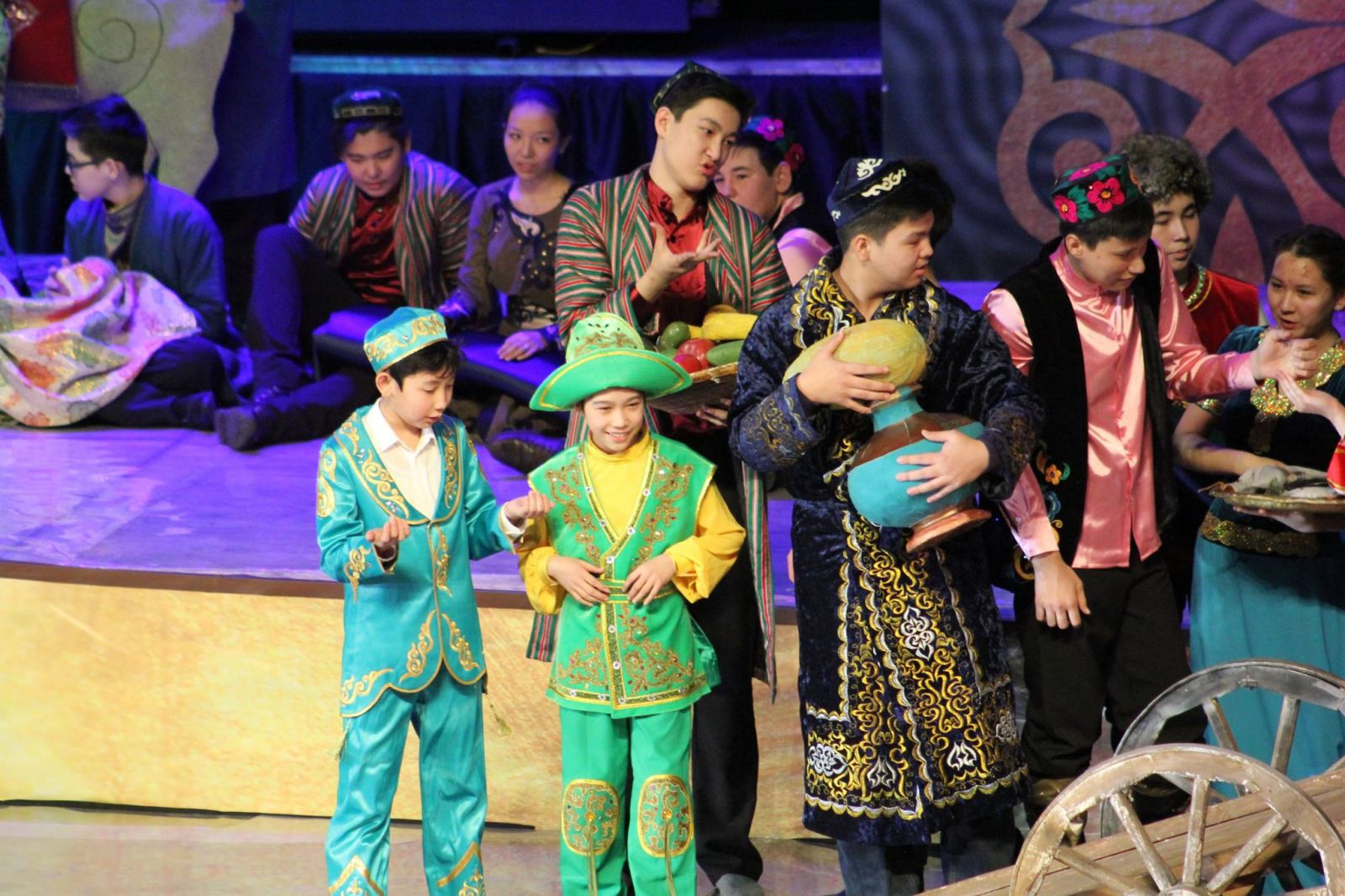 Rich and multilingual oriental bazaar opened another chapter of NIS training program – the project "Tugan elge tagzym". Through local history research expeditions the project instills interest in native country. The history of individuals, the streets and the economy of the region are known through visits to companies, research works. 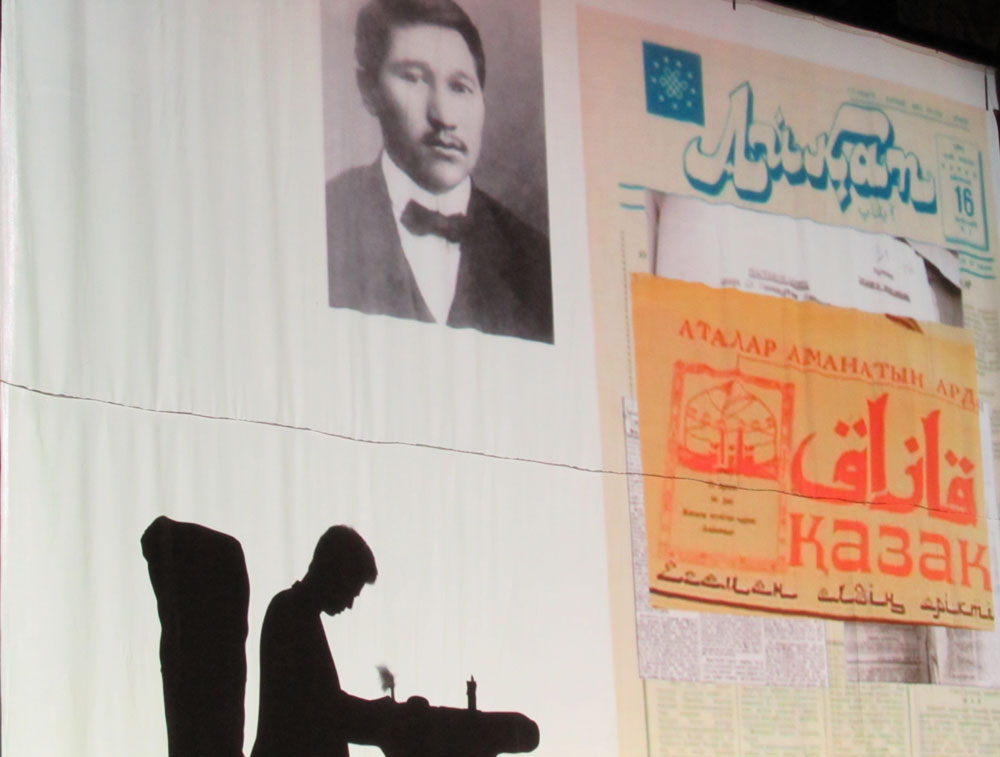 You can learn more in the expedition, mountain hiking, and environmental action of cleaning the coastal and forest areas, thanks to it the younger generation gets experience of making their own decisions and actions. "Tugan elge tagzym" project entered in the State Program of Education Development of Kazakhstan till 2020.

On the stage was stretched village, where the student Dauren from Nazarbayev Intellectual School arrived on vacation, where he met with joy grandfather and brother Azamat. In this skit disclosed specifics of social practice "Ekі Apta auylda", in which students spent in the village 2 weeks, helping on the farm, get acquainted with the life of auyl residents, national games: arkan tartu, togyz kumalak, asyk. The project is aimed at the education of the individual hard-working and responsible, in the spirit of service to society, with the consciousness of belonging to the people.

Staging "Mangilik El tarikhy" with shadow play show, the students showed their reverent attitude to the native history. History of Kazakhstan occupies a special place in the Intellectual Schools. There is a special subject, "Kazakhstan in the modern world", where children become familiar with the initiatives of the President of Kazakhstan in the international arena. With enthusiasm they learn a distant history of their people, not only in the classroom, but also through the drama. An example of this is staging, dedicated to the 550th anniversary of the Kazakh Khanate. 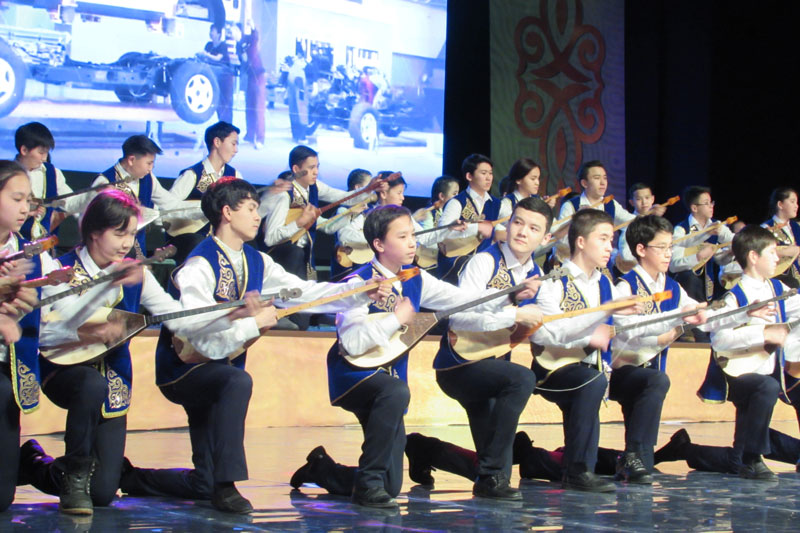 Kyui "Saryarka" was performed by dombra orchestra students. On the scene there were 100 dombra players of NIS from Astana, Pavlodar, Aktobe, Atyrau, Taldykorgan, Uralsk, Ust-Kamenogorsk, Taraz and Almaty. Spectators witnessed the execution in the same breath of the great kyui by children from different schools, different cities, with little or no rehearsal. In the program of NIS project "Zhuz kyuidіn tarikhy" allows children to learn the history of kyuis, biography of composers - Korkyt ata, Tattimbet, Ykylas, Kurmangazy, Dina Nurpeisova, learning to play on national instruments: zhetigen, kobyz, dombra, sazsyrnay. 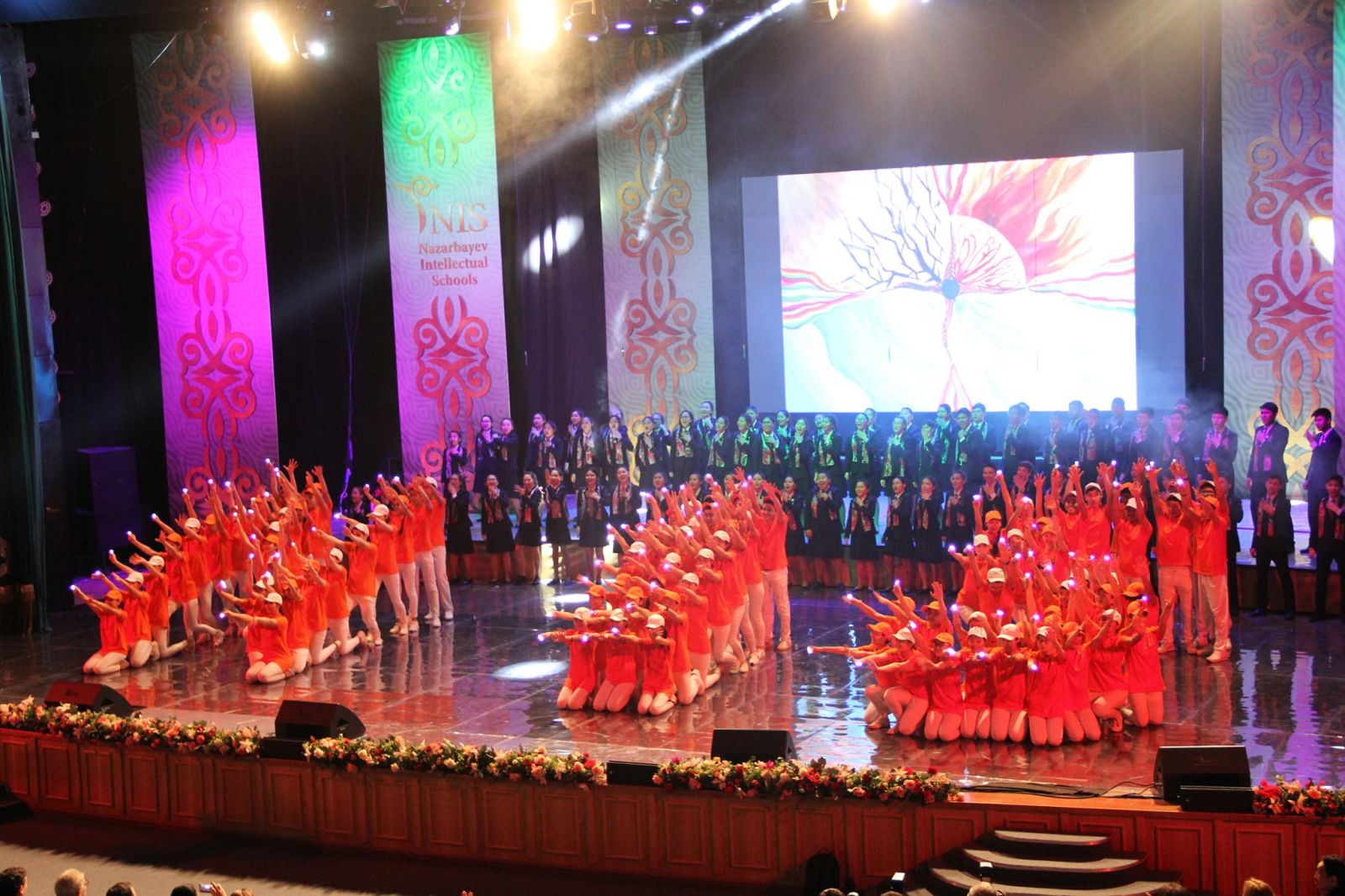