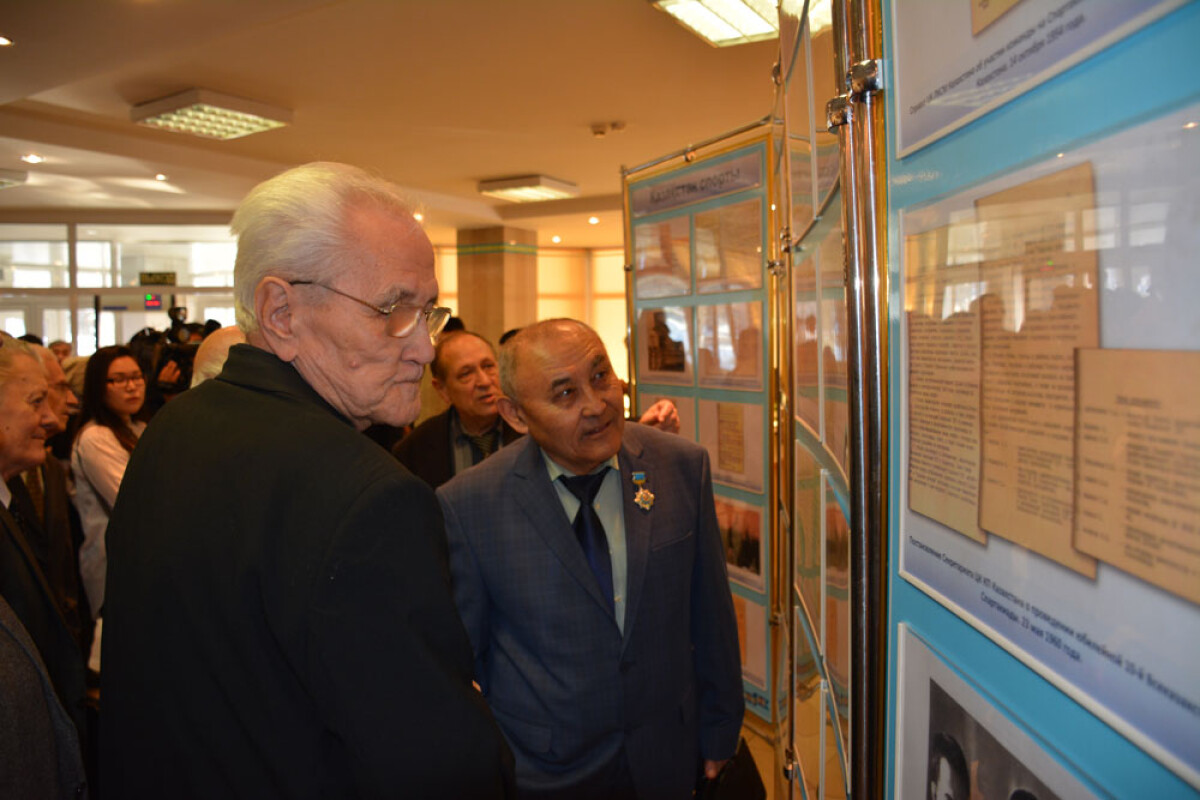 The purpose of the event is an extensive coverage and promotion of the archival heritage of Kazakhstan, historically associated with the current events of the time in politics, economy, culture, science and sports. The exhibition presents materials from the President of the RK Archive funds in the history of sports development in Kazakhstan, starting with the 30-ies of the last century to the present day: the documents on the sporting achievements of Kazakhstan in major international and national competitions, the construction of sports facilities and activities of the sports community, individual athletes. Archival documents of the exhibition are presented in three sections. The first section contents materials on the history of the sports in 30-40-ies of XX century. Since 1930s started mass emergence of physical culture and sports. In 1932 was created National College of Physical Education and Sports for the training of professional staff, including national. Among the teachers were highly qualified specialists who graduated from Moscow and Leningrad Institutes of Physical Culture: S. Girzhon, G. Meschersky, Makarenko and S. Stuge. There were first-Kazakh teachers - M. Seraliyev, M. Dzhayshibayev and Kh. Mukhamedzhanov. The exhibition features photos of teachers and students of 1939 class. In July 1936 was established a national committee for physical culture and sports. All-Union GTO system determined the development of physical culture and sports in the country. 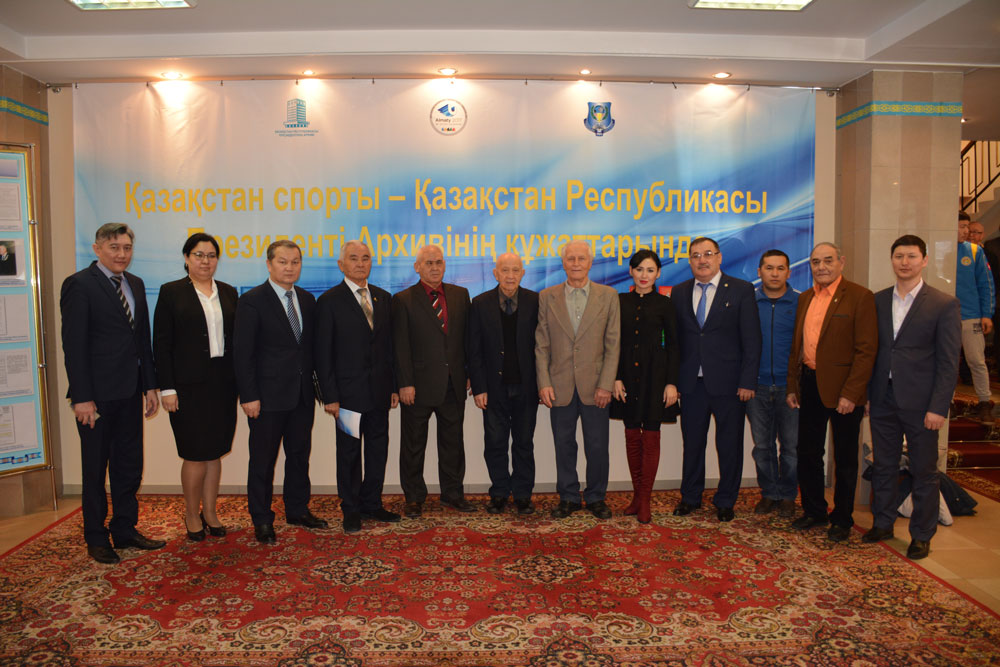 The presented archival materials content the results of national championships and Olympics, allied competitions. In November 1940, dedicated to the 20th anniversary of the Kazakh SSR was held jubilee Spartakiad, which was attended by more than 600 athletes. At the Spartakiad 33 republic records were set, including records of Sh. Bekbayev in 200-meters race, V. Oshev in triple jump and N. Chumachenko in decathlon. Among women, the record results showed L. Martynova in the women's 100m and hurdling, L. Shikhova in discus throw and T. Sergeyeva in pentathlon. By the beginning of 1941 in the republic there were already more than 137,000 athletes and sportsmen. The next section of the exhibition covers the postwar period, 50 - 80 years of the twentieth century. There are presented documents on the 4th All-Union Spartakiad of the USSR people, held in 1949. Spatrakiad brought 38 new records of Kazakhstan. The materials on the high-skating rink Medeo are of great interest. The documents of the 10th anniversary All-Kazakhstan Spartakiad in 1960 show 24 new national records. A significant event in the sporting life of the USSR was the championship in athletics in 1965. From Kazakhstani athletes’ great success achieved a sprinter A. Tuyakov, who won a gold medal in 200-meters race. In 1972, the best athletes of the republic took part in the national team of the USSR in the XX Olympic Games in Munich. Olympic champion became a wrestler V. Ryazantsev, silver medalists – a wrestler A. Nazarenko, an athlete V. Soldatenko, a volleyball player V. Kravchenko and a swimmer V. Aboimov. The archival materials of the XXII Olympic Games in Moscow (1980) present Kazakh athletes who won 16 medals. Among them, a wrestler Zh. Ushkempirov, a water polo player S. Kotenko, a basketball player N. Olkhovaya, a wrestler Sh. Serikov, a weightlifter V. Mazin, an athlete V. Muravyov, boxers Konakbayev S., V. Demyanenko, A. Bykov, T. Lesovoy, M. Azimov, F. Zigangirov, M. Myasnikov, O. Zagorodnev, Nechipurenko M. and A. Goncharenko. 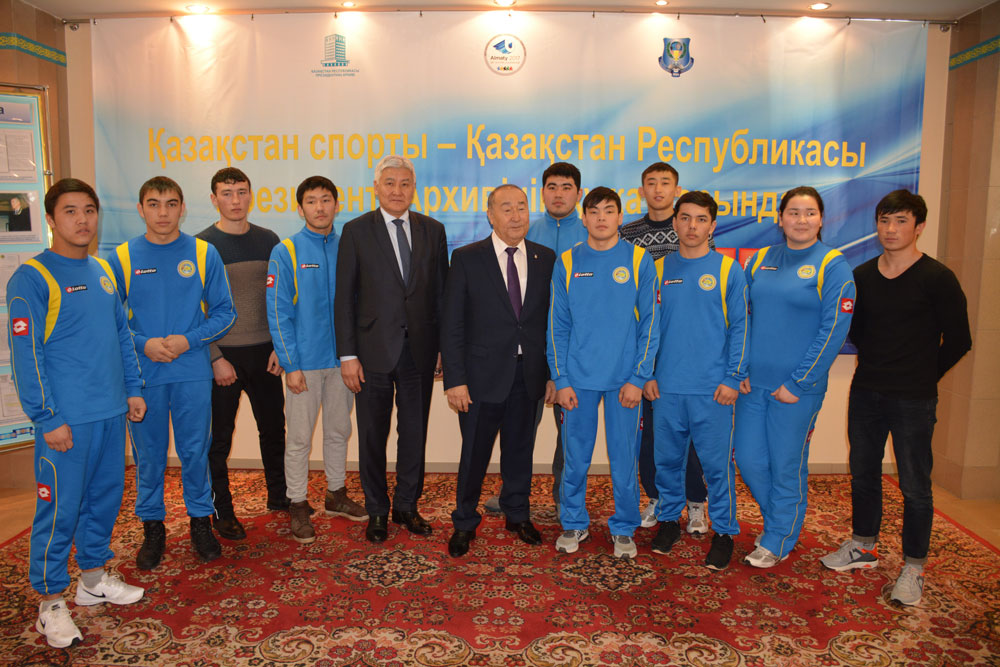 The exhibition concludes with a section on the development of sports in the period of Independence. Here are the laws and decrees of the President of the Republic of Kazakhstan, aimed at the development of sports: the Republic of Kazakhstan President's Decree of March 1992 "On the development of tourism and sports in the Republic of Kazakhstan" and the Law "On Physical Culture and Sports". Among the documents a significant part occupies the Olympic Games results. At the Olympic Games in Lillehammer in 1994, the national team of Kazakhstan for the first time acted under its own flag and national anthem, winning 3 medals – 1 gold, 2 silver. All medals won a skier V. Smirnov. At the XVII Olympic Games in Sydney in 1996, Kazakhstan's national team won 7 medals - 3 gold, 4 silver and took 22nd team place among 199 countries participating in the Olympics. Olympic champions were O. Shishigina (hurdling), boxers E. Ibraimov and B. Sattarkhanov; A. Vinokur won silver (cyclist), I. Bayramkulov (wrestler), B. Zhumadilov and M. Dildabekov (boxing). Sports veterans got acquainted with archival documents of the exhibition - the heroes of those historical events. Documents were complemented by unique exhibits provided by the Republican museum of sports and Olympic Glory of the Kazakh Academy of Sports and Tourism. Photos of Kazakhstani athletes were of great interest among the participants - winners of international and national competitions. Opening the round table, a director of the President of Kazakhstan Archive B.A. Dzhaparov noted that sporting achievements of modern Kazakhstan represent an established state, which carried out systematic reforms, successfully developing and confidently looking into the future. Holding the Winter Universiade - is the prestige of Kazakhstan in the international sports arena, the authority of Kazakhstan sportsmen. Veterans of sports and sports journalism shared their memories of the victories and the great work of athletes and coaches in training.

At the end of the Round Table Master of sports of international class in gymnastics, silver medalist of the World Universiade in 2003 in South Korea Gorbachev Stepan said: "Universiade - is a huge event for our country, for our city, for our children who will be able to personally see everything and feel themselves little athletes. On behalf of all athletes I would like to thank the President of the Republic of Kazakhstan N.A. Nazarbayev for his support to the Winter Universiade. Promotion of sports among children and young people - is a very important moment, and such major sporting events contribute to this. Perhaps in the future in Kazakhstan will be organized the Summer Universiade. It is necessary for children and young people to engage in sports. I would like to say about the exhibition, I think that, thanks to the archival documents, you can better know the history of Kazakhstan sports. Thanks to the organizers for a great opportunity to get acquainted with archival materials, unique photos and communicate with veterans of sports".

A spokesman for the President of the Republic of Kazakhstan Archive