What the materials of the USA CIA say

The origin of Kazakhs takes its start from the name “Kazakh”, which means “a fugitive and masterless man who has separated himself from his tribe or overlord”

The Central Intelligence Agency of the USA declassified materials concerning Kazakhs and the history of the formation of the Kazakh statehood. In the internet in free access were placed 775 thousand documents disclosed on the decree of the President USA Bill Klinton in 1995. First, the CIA reported that for publishing online of all the documents 28 years will be required. In 2015 this term was reduced to 6 years.

Published documents cover various topics, including materials regarding the history of the origin of the name of “Kazakh” and formation of the Kazakh state.

The Kazakh race of Sinkiang is also referred to, both in Sinkiang and in English-language texts on that province, as Kazak, Kasak and Ha-sa-kc. According to a 1941 survey they numbered 318, 716, or slightly over 8.5 % of the total population of Sinkiang.

The origin of Kazakhs is indicated by the name “Kazakh”, which means “a fugitive and masterless man who has separated himself from his tribe or overlord”. Their name was adopted by the Russians, Poles and Ukrainians, and is pronounced in an identical manner. The English-language version of this name, however, changed the Slavic pronunciation of KazaAk to COssack. 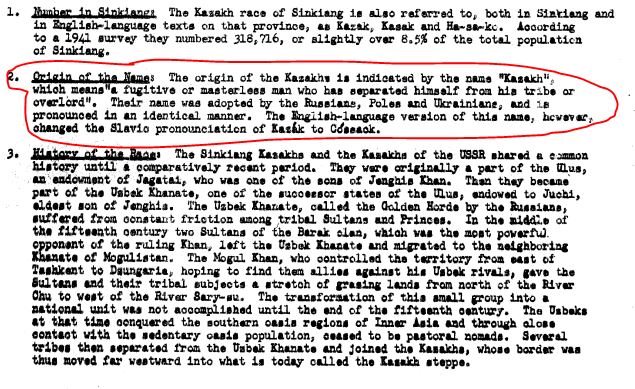 The Sinkiang Kazakhs and the Kazakhs of the USSR shared a common history until a comparatively recent period. They were originally a part of the Ulus, an endowment of Jagatai, who was one of the sons of Jenghis Khan. Then they became part of the Uzbek Khanate, one of the successor states of the Ulus, endowed to Juchi, eldest son of Jenghis. The Uzbek Khanate, called the Golden Horde by the Russians, suffered from constant friction among tribal Sultans and Princes. In the middle of the fifteenth century two Sultans of the Barak clan, which was the most powerful opponent of the ruling Khan, left the Uzbek Khanate and migrated to the neighboring Khanate of Mogulistan. The Mogul Khan, who controlled the territory from east of Tashkent to Dzungaria, hoping to find them allies against his Uzbek rivals, gave the Sultans and their tribal subjects a stretch of grazing lands from north of the River Chu to west of the River Sary-su. The transformation of this small group into a national unit was not accomplished until the end of the fifteenth century. The Uzbeks at that time conquered the southern oasis regions of Inner Asia and through close contact with the sedentary oasis population, ceased to be pastoral nomads. Several tribes then separated from the Uzbek Khanate and joined the Kazakhs, whose border was thus moved far westward into what is today called the Kazakh steppe.