ENU students took an ‘exam’ from the rector 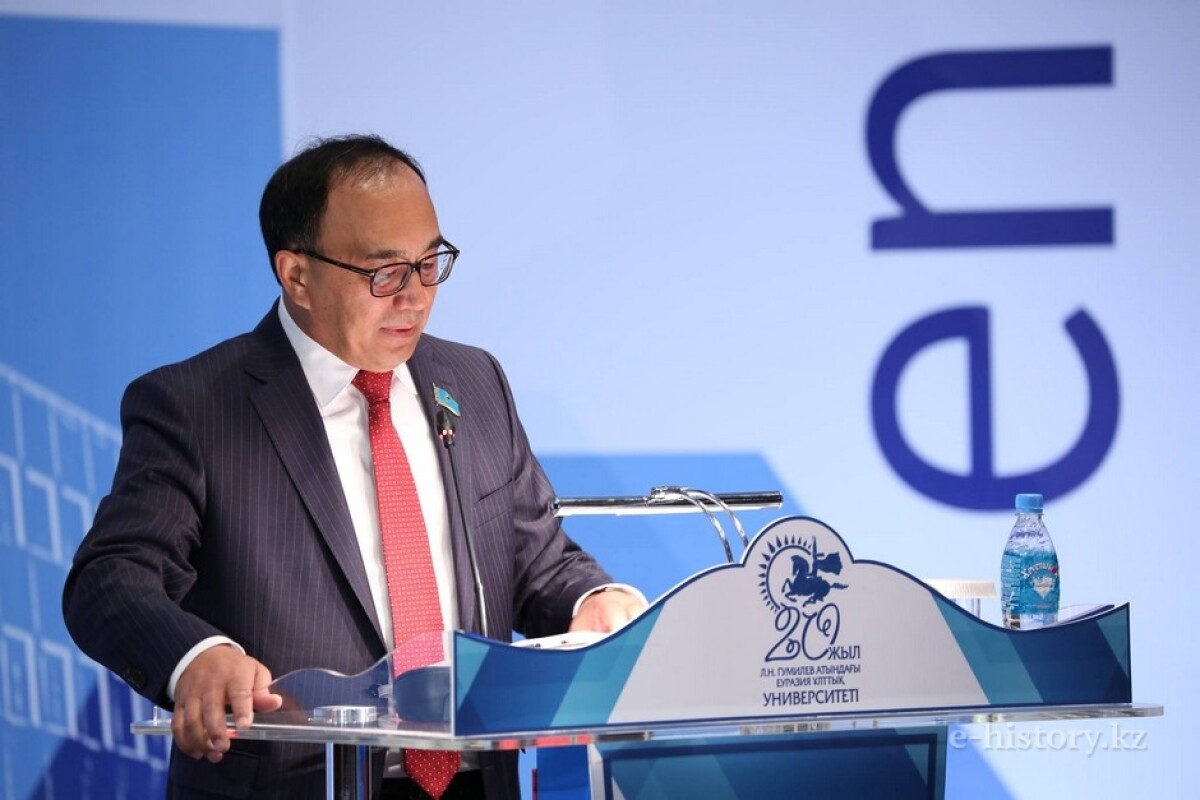 ‘I taught at the University, took examinations, gave grades during 38 years. Today I pass the exam before you, dear students…’

On 30 September, the rector of ENU Erlan Sydykov made a report to the public – students, parents, academic community, employers and the media. There were no free places in the spacious Presidential hall of the university. The best and most talented students of university were the first who welcomed the guests. Stories and poems in their performance inspired the gathered audience. Erlan Battashuly went to the stage accompanied by applause.

‘I taught at the University, took examinations, gave grades during 38 years. Today I pass the exam before you, dear students…’, - the rector of one of the most prestigious Universities began his speech with a smile.

A report on the activities of Eurasian National University for 2015-2016 academic year was full of information about the achievements. There are 13 faculties, 68 departments, 1535 teachers and 16 195 students at L.N.Gumilyov Eurasian National University. It is the only university in Kazakhstan and CIS that was included in the ranking QSTop 50 Under, where it takes 37 position among 100 universities of the world, opened no more than a half century ago. 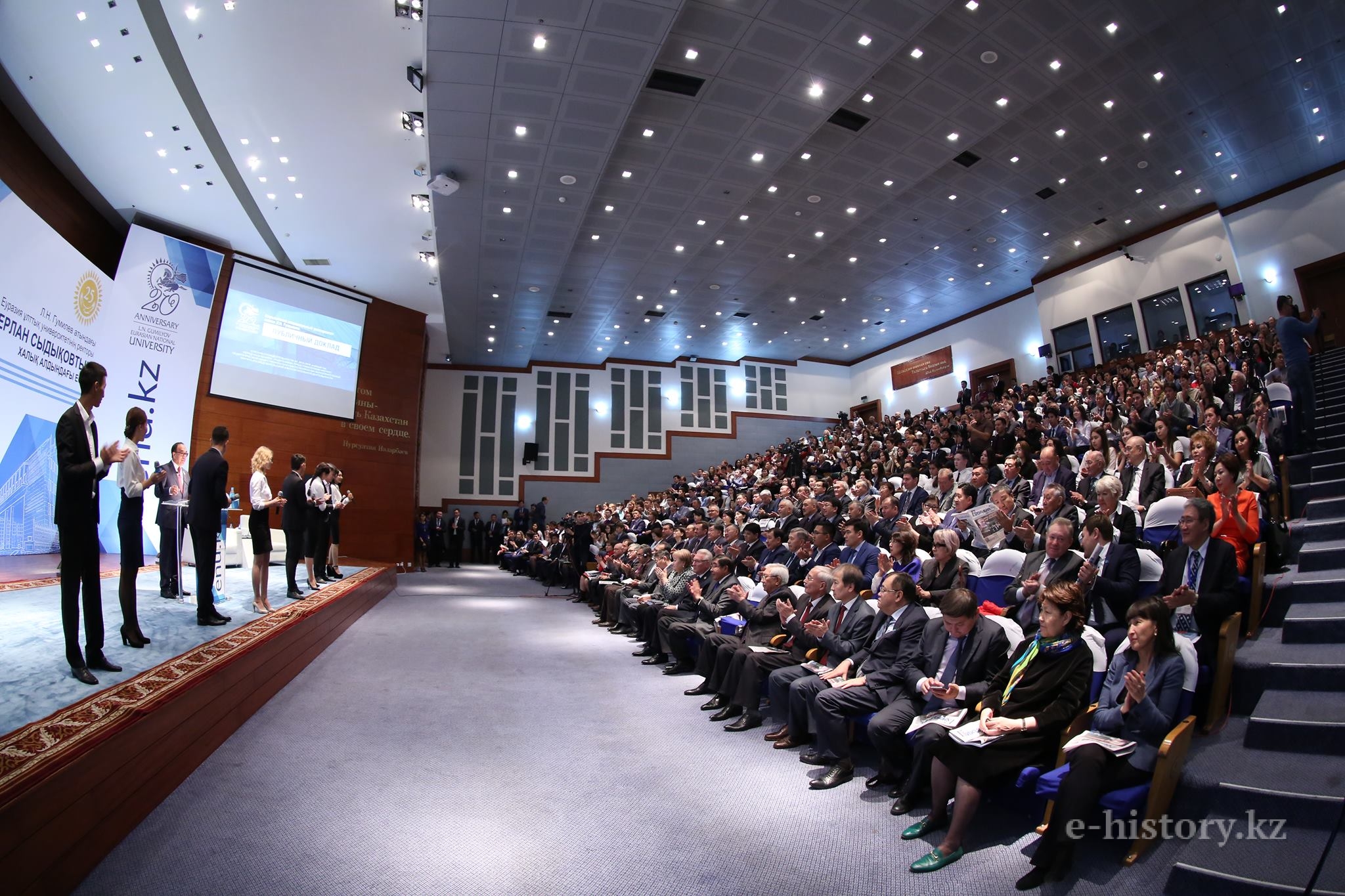 According to Academic University Ranking Performance, ENU is the only university in Central Asia included in the top-550 universities of Asia. It is pleasant to note that ENU takes a worthy position in the world rankings and first place in the national academic rankings held by IQAA and IAAR. 150 educational programs comparable to programs at Cambridge, Oxford, Sorbonne, Peking and Tokyo universities are accredited at ENU. More than 30% of University programs are accredited by international accreditation agencies AQUIN, ASIIN. 136 programs take first three positions in IAAR ranking. Experimental programs are developed and tested, new demanded specialties are opened. Thanks to these achievements, Eurasian National University becomes an attractive educational center for young people from all regions of the country.

Speaking of young people, students of ENU have the place where to realize creative potential. The club forms of the work are actively developed at ENU. About 10 thousand students are involved in more than 70 clubs and 10 creative associations. Dance School ‘Samruk’, ‘Shanyrak’ and ‘Attraktsion’ theatres, ‘Dala sazy’ orchestra, ‘E-studio’ achieved significant results, they won prizes in all competitions of 2015. Team ‘Kultegin’ became a member of the Highest League of KVN of the Republic of Kazakhstan. 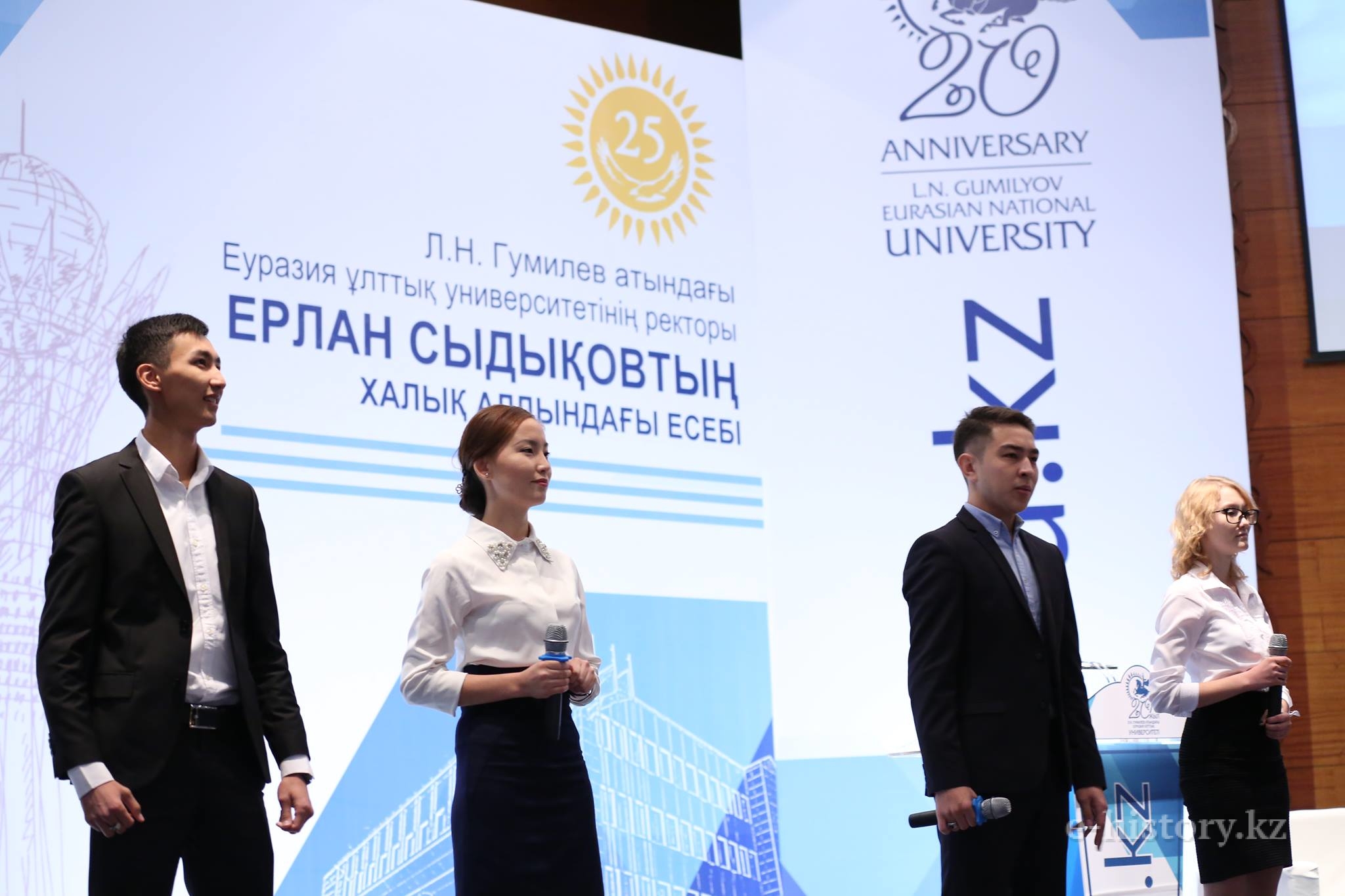 It should be noted that the University is also a platform, where prominent scientists, public figures, representatives of art and literature hold open meetings. After listing the vast number of achievements, Erlan Sydykov introduced all the goals and tasks of the University: ‘

FIRST. We will develop fundamental and applied science, to strive to produce intellectual; products for industrial and innovative development of the country. We aim to increase the share of highly efficient and average-efficient projects in the total number of applied studies’.

THIRD. We plan to implement a gradual transition to international management practice, including involvement of the faculty and students in managerial decisions by means of introduction of KPI system, focused on a result.

FOURTH. Finally, we will continue to develop material and technical base, university infrastructure for realization of educational programs and research, including the accreditation of research laboratories and equipment certification.

After designation of the tasks, the time for questions from audience came. 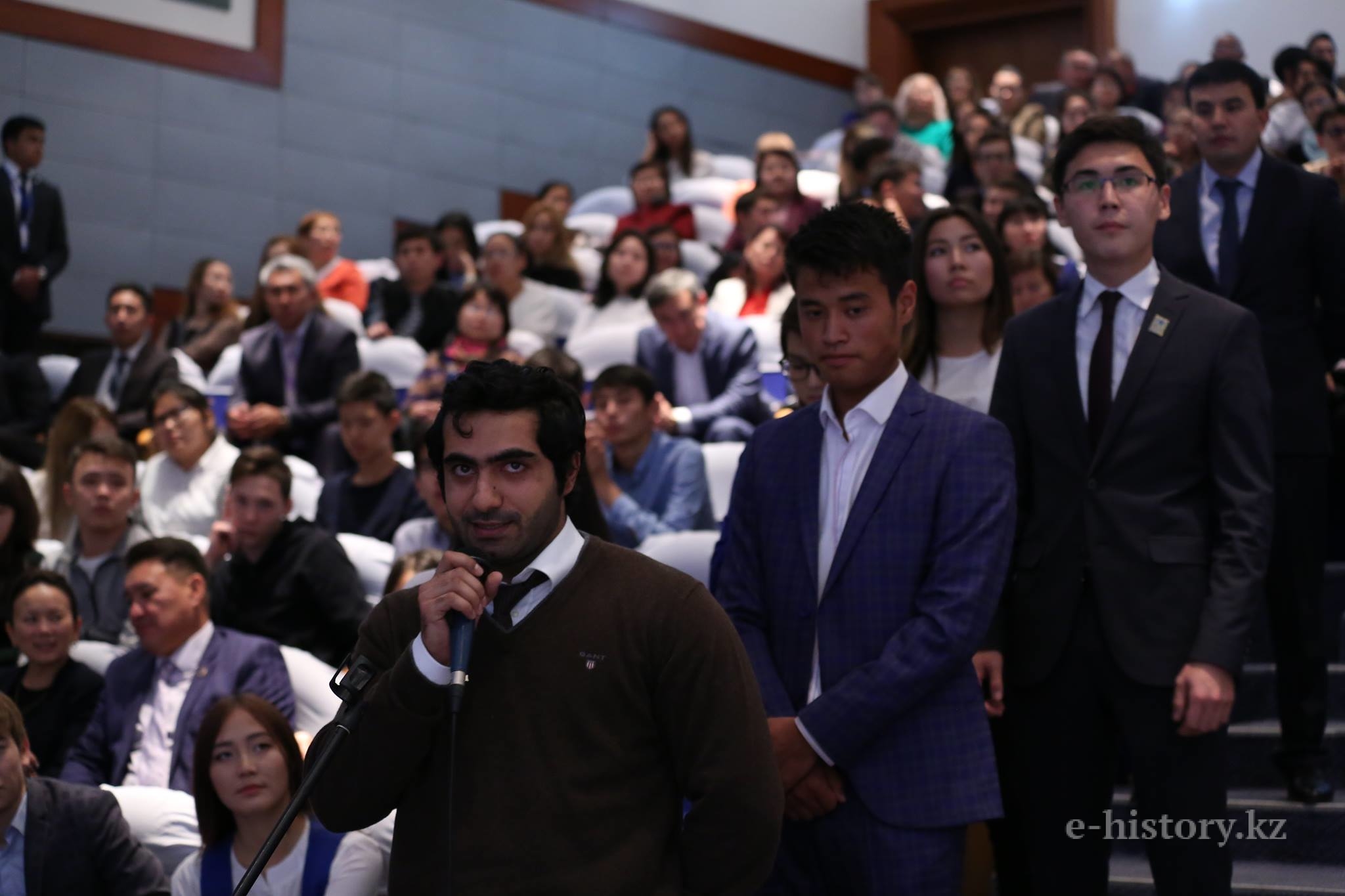 Serikbolat Mustafayev, a student of Information Technologies Faculty asked about the possibility of opening the central medical facilities at university dormitories, where more than 3 thousand students live. The rector agreed with the relevance of the question. Four years ago, several medical facilities were opened, but it was difficult to cover all 16 thousand students with qualitative health care and Erlan Sydykov gave a task to administration of the student houses to find a place for students’ health center.

There was an obvious difference among the students who asked questions: seniors who were familiar with the problems of the university as shortage of places in dormitories, cared more about the issues concerning the further development of the university. The audience was amused with the question of a freshman, who disagreed with the general regime of living in the dormitory. The rector gave reconcilable and consistent reply: The discipline that excludes presence of students outside of the campus after 11pm is necessary to organize academic process and provide safe accommodation of students. It is not whim, it a security measure. According to the head of university, the problems with places in dormitories will be partially solved after the end of construction of the new dormitory for 510 places next year.

One of the foreign representatives expressed gratitude to University administration for close and efficient cooperation with foreign educational institutions and noted the good level of English and other languages of ENU students. The following question related to the prospects of development of teaching foreign languages. The rector said that university plans to attract foreign teachers in the near future. This year, 115 foreign specialists were invited. Next year, the rector hopes to increase this umber. In his opinion, these measures should contribute to the development of academic mobility of graduates and the faculty. 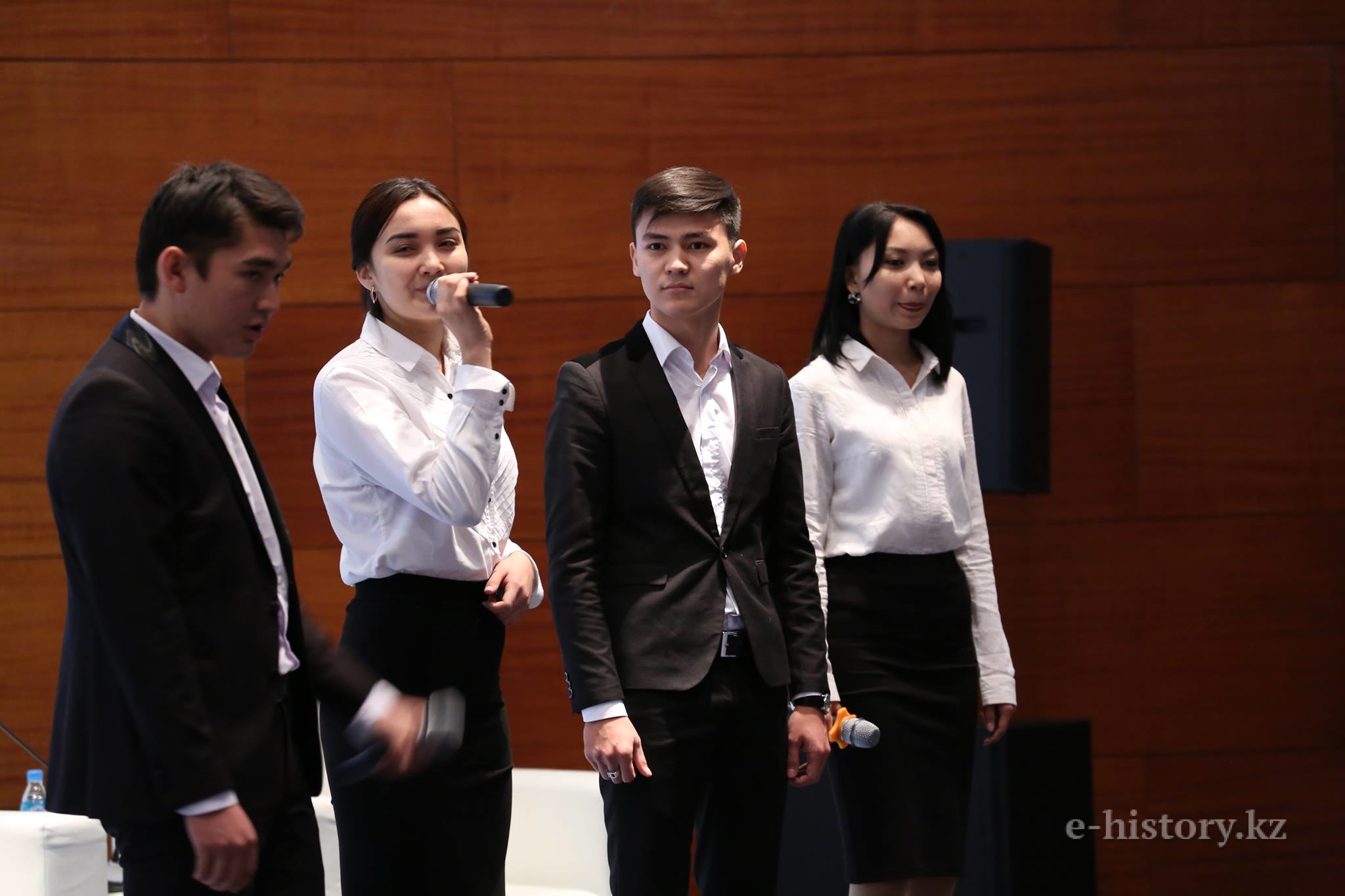 A student from Kuwait Akhmet studies in a master course of ENU majoring in ‘International traditions’. He expressed his sincere appreciation to the administration for the opportunity to study at University and asked, could he teach in English after graduation? The figures given by the rector relating to this issue aroused the applause by audience. Teaching in English is held in 125 groups of the University, it is more than thousand students. Teachers who hold lessons in English have salary supplement.

Our portal asked about the possibility of entering ENU the top 200 best universities of the world by 2020, the rector replied: ‘International agencies identify the ranking of universities according to criteria. We strive to the high rates on each of them. I do not want to say that it is impossible task for us. It should be noted that the strongest educational institutions of the world compete for the entry and consolidation in this ranking annually. If we stay on the current position – it is already a huge achievement. It goes without saying that we strive for more and work hard, to enter top-300 ranking next year’.