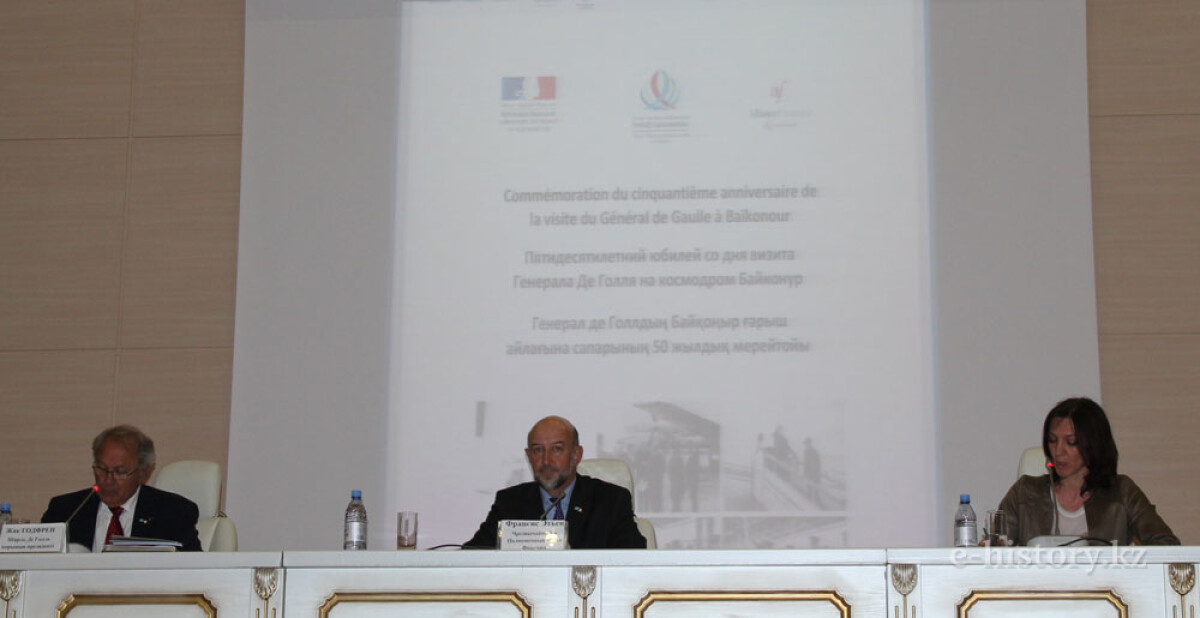 A unique conference dedicated to the 50th anniversary of General de Gaulle’s visit to Baikonur was held at the National Museum of the Republic of Kazakhstan.

On June 25, 1966 General de Gaulle — the main person in the history of France of the XX century and a man of outstanding personality on the international stage arrived to Baikonur to attend the satellite launch from rocket «Voctok-2M». The event attended by the First Secretary of the Communist Party of Kazakhstan Dinmukhamed Kunayev was not provided extensive coverage by historians; however, it became the first visit of the Head of West-European State in history to the territory of Kazakhstan and therefore, can be considered as a fundamental event in the relations between France and Kazakhstan.

Embassy of France in Kazakhstan and French Alliance of Astana accepted delegation of prominent figures of France headed by Jacques Godfrain, President of Charles de Gaulle Foundation and former Minister from June 23 to 25, 2016 to commemorate the fiftieth anniversary of General de Gaulle’s visit to Baikonur. In addition, there were Director of Charles de Gaulle Foundation Admiral Jean-Claude Barrer, Head of National Center for Space Studies Cabinet Pierre Trefouret, Director of Space City in Toulouse Jean-Baptiste Dubois and Vice-President of «Airbus Defense and Space» Space Center Hugues Laporte Weywada among the delegation members. 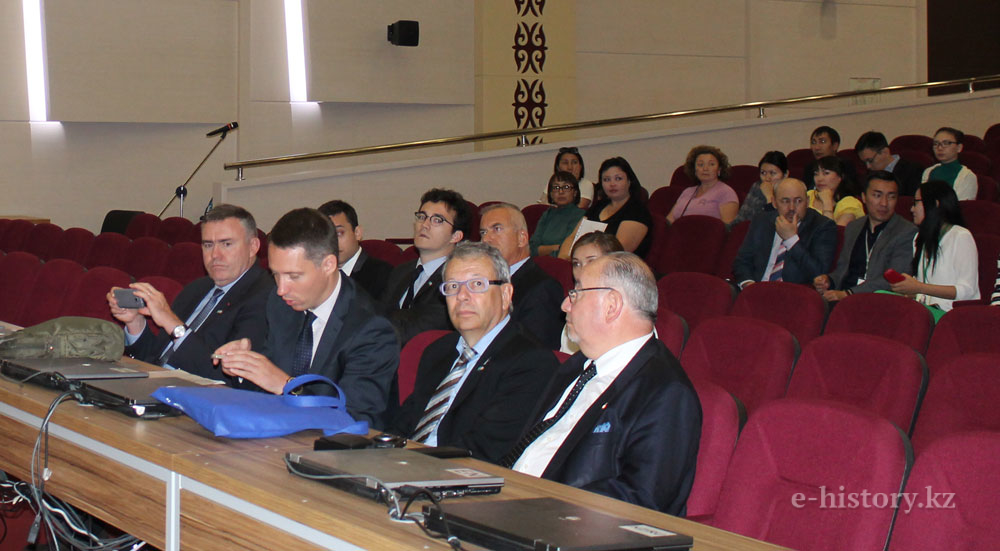 The issues about the role of General Charles de Gaulle in establishment of independent France, as well as his invaluable contribution to people’s friendship were also raised during the conference.

Francis Etienne, Ambassador Extraordinary and Plenipotentiary of France to Kazakhstan: 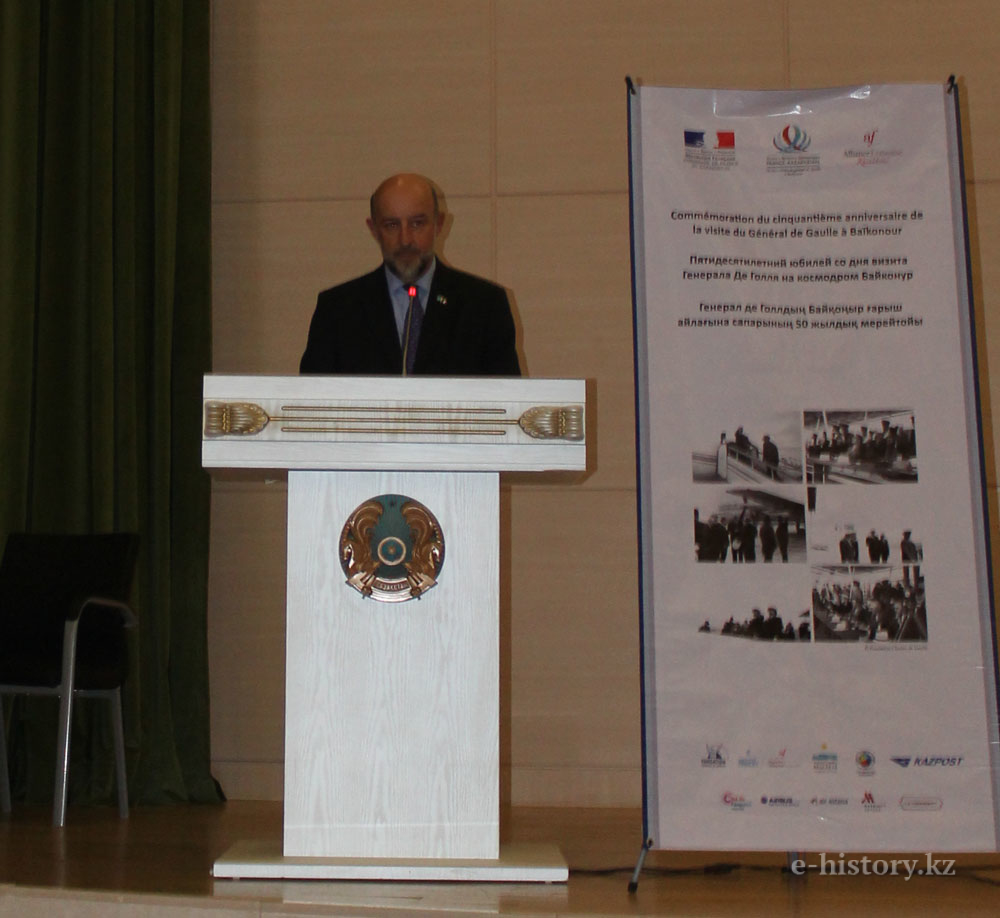 President Nursultan Nazarbayev is the Leader of the Nation in Kazakhstan and Charles de Gaulle plays the same role for us. 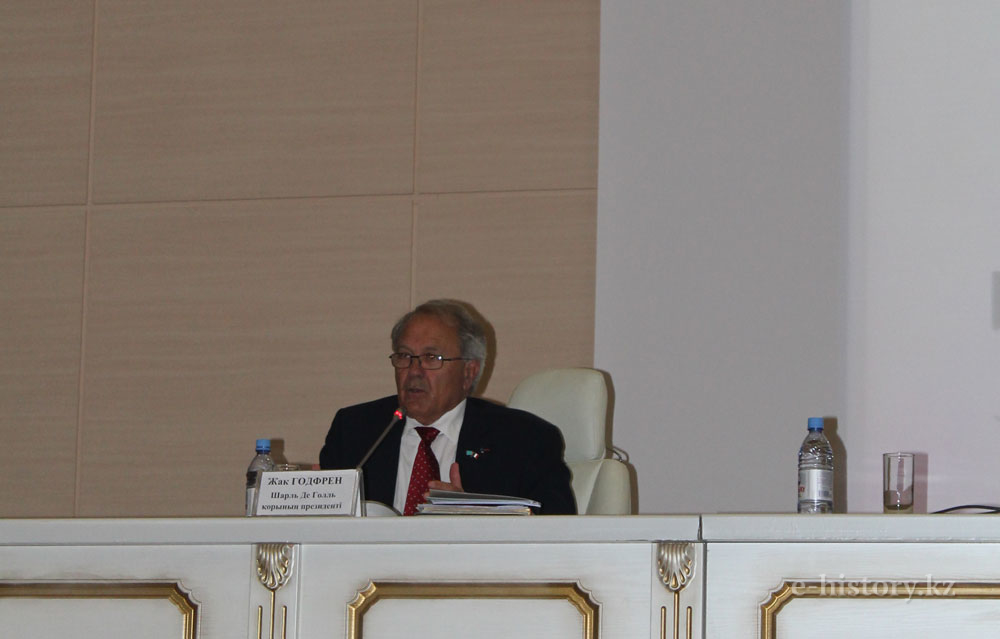 — General Charles de Gaulle is an outstanding person of international scope who did a great job in terms of uniting people and nations. Probably, there are not so many political figures who have left indelible mark in the history of their countries. General de Gaulle had strategic vision that allowed him to accurately determine the situation during big historical period in the shortest time, thus, he was far-sighted. In 1940, de Gaulle was able to predict inevitable defeat of Germany at that time. When it seemed invincible and conquered France was hopelessly fated.

De Gaulle’s outstanding quality was excellent knowledge of history that allowed him to figure out in advance and do analysis for the future. He claimed that Russia is eternal and it would always exist. General de Gaulle flew to Moscow and there he concluded the Franco-Russian Friendship Treaty. Charles de Gaulle did a lot both for his country (moment of Independence is the time of modern, industrial France for him) and the world (de Gaulle was the first President who recognized independence of China and delivered a speech about liberation of Africa).

The staff of the National Museum offered to hold an exhibition of historical photo-materials confirming Charles de Gaulle’s visit to Baikonur, and Jacques Godfrain supported that idea. 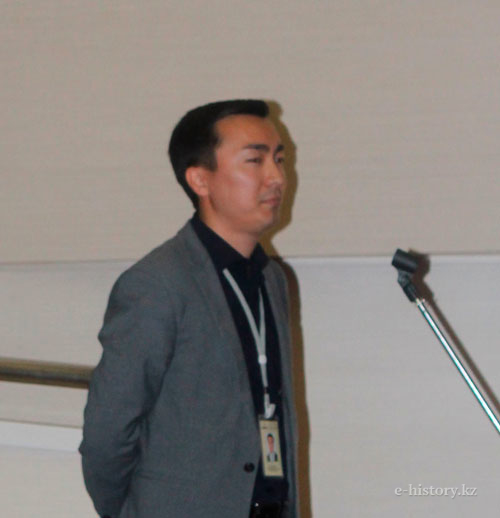 Finally, the representatives of the education sector and media expressed their gratitude and appreciation for the active cooperation between Kazakhstan and France. Guests and receiving party exchanged gifts. 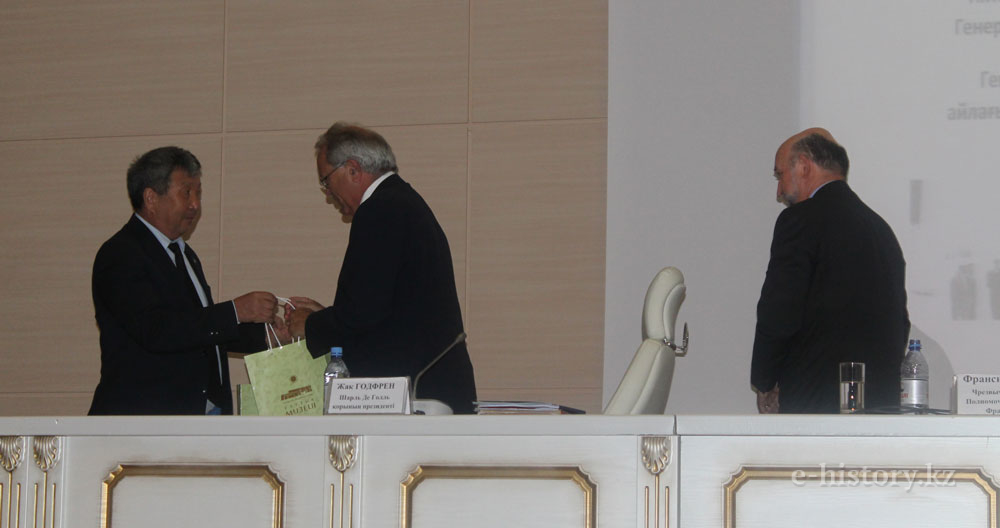 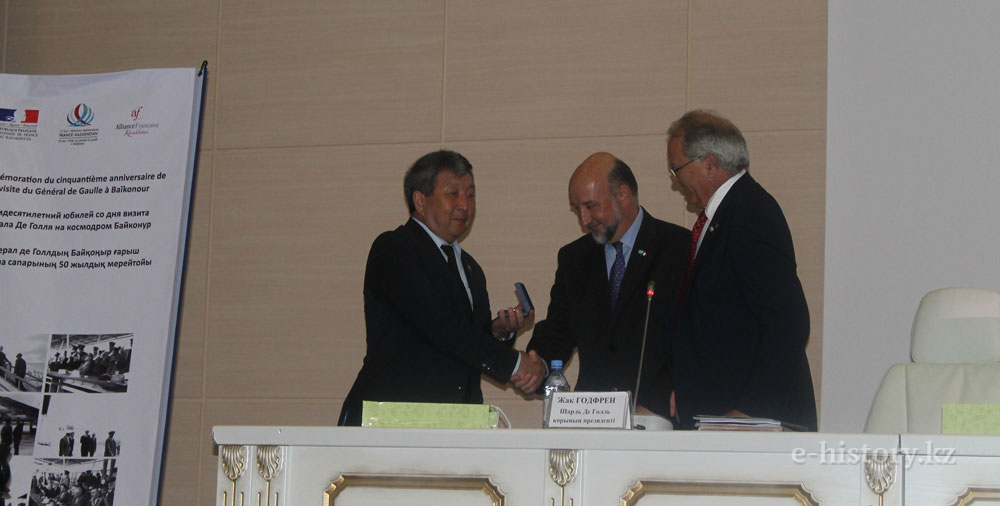 By Malika MURSALIMOVA
Use of materials for publication, commercial use, or distribution requires written or oral permission from the Board of Editors or the author. Hyperlink to Qazaqstan tarihy portal is necessary. All rights reserved by the Law RK “On author’s rights and related rights”. To request authorization email to or call to 8 (7172) 57 14 08 (in - 1164)
Қазақша Русский English
THE MOST WIDELY READ
Month Year
The top of pyramid stores the yurt
On How Kazakhstan Ended up as part of Tsarist Russia Kunaev Dinmukhamed Akhmedovich Recorded history of Kazakhstan. Part 2 The title of “Folk hero” was posthumously awarded to three veterans of the Great Fatherland War Union of the Archives and Library A great son of the Kazakh steppes People who eat horses will kill you Recorded history of Kazakhstan. Part 1 Burial mounds of the southwestern part of the Semirechye region The referendum on the Constitution is a significant stage of democratization Rebooting a field of science and education Kazakhstan's participation in the Winter Olympics has a long history
Polls
Materials on the topic
Labels of the Golden Horde khans and Russian clergy
From the story of a blood feud
A role of Buddhism in formation of Central Asian mythologies
The referendum on the Constitution is a significant stage of democratization