Kazakh khans “revive” before the contemporaries in 3D format 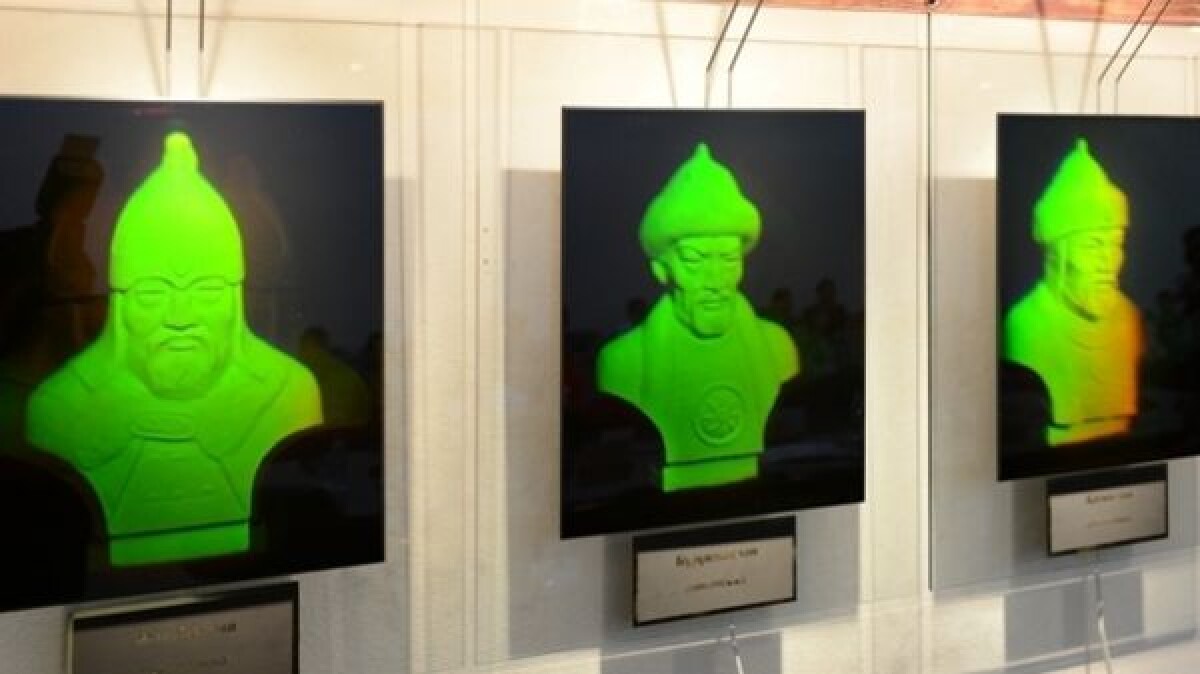 In Astana the unique holographic portrait gallery “Kazakh khans” dedicated to the 550th anniversary of the Kazakh khanate was presented. The wonder-pictures in 3D format were created.

The idea of creation of pictures in 3D format was suggested by the LLC “Joint Enterprise “Holography Kazakh-Bel”. The support in the realization of unusual project to the initiators was lent by the scientific-technological center “Parasat”. Among performers — top scientists, historians, artists, sculptors and IT specialists of the country. However, the last ones at the final stage of the project for direct transfer of objects to holographic image had a resource to Belarussian colleagues, who are second to none at the whole Post-Soviet area.

— The record of holograms was produced in Minsk under the supervision of the academician of the International Engineering Academy named after Leonid Tanin, the Director General of the LLC “SP “Holography Kazakh-Bel” Amirkhan Orynbayev. — We do not have the full set of necessary equipment yet, but in the perspective we hope that we will have the possibility of the projects realization of art holography.

The national specialists made a great job, but it took nearly one year for the only preparation. For the restoration of portraits of outstanding personalities of the past sculptors and artists had to work out a great amount of historical literature. According to the words of the head of a group of sculptors of the Honored Activist RK Sembigali Smagulov, they analyzed written and archive sources which were published within the realization of the program “Cultural Heritage”, reviewed 20 volumes of works of a famous folklorist Mashkhur Zhusup Kopeev, also Chokan Valikhanov and Alkey Margulan’s works. The cause for such a detailed study of the issue became the fact that till now not many know how some of khans looked like. Thus, the authors could not come to a common opinion according to Burunduk-. Bolat- and Nuraly-khan’s appearance for a long time.

In the end, 21 gypsum bas-reliefs were made and on their basis unusual hologra-pictures were created. Owing to the assistance of Belorussian partners framed now Kazakh khans’ silhouettes look as if alive. Among them are famous Kerey and Zhanibek, Kasym and Kenesary, Abulkhair and Abylay.

By the way, the process of holographic reproduction is no less labour-consuming. So, for instance, it is necessary to have the sound proof accommodation where the record is produced. Because of that specialists prefer to work early in the morning, when even echoes of street traffic are not heard. Hereby, the operators themselves are to be outside the room, even breath and body temperature can negatively influence this work.

The picture gallery will take a rightful place at the “EXPO-2017” exhibition as the authors believe. It is presupposed to locate it in “History of Kazakhstan” pavilion. Among concerned parties in the project is “Khan Shatyr” trade-entertainment centre, the authors had to refuse them. The point is that such portraits need semi-darkness, only then the specialists consider they look really magical. It is worthy to note that the signal issue at the shown interest on museum, picture galleries workers’ side, the employees of Kazakh-Bel will not confine themselves. On basis of the present matrix they will be able to reproduce the holographic portraits repeatedly at any moment.