Jute in 30s was recurred at the theatre stage 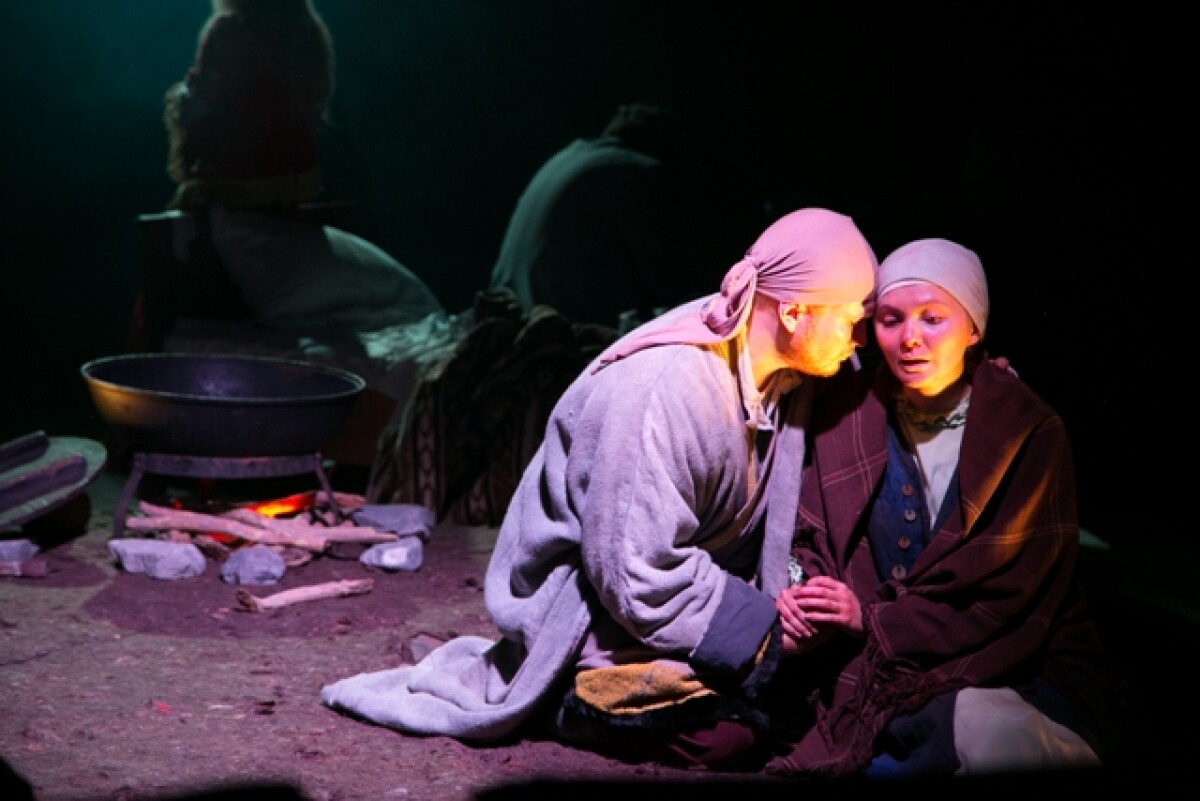 At the stage of the Russian Drama Theatre named after M. Lermontov the unusual premiere: the performance “Jute” which plunged the contemporaries into the hard for Kazakh people time.
The parallel with the contemporary world outlined in the performance demonstrates the young generation notwithstanding the comfort and material wealth, spiritually degrades...

Akhmet (played by Ilya Shilkin) and Saule (Kamilla Yermekova) married for a great love. He is an educated, but poor young man, she — bay’s daughter. In the Extermination by hunger in search of the best share as many, the young people did not head for the south losing the close people. The elder son died, the infant daughter stayed with them. But grief only united the spouses. They do not think about themselves, but take care of each other. And — the common hope that soon everything will settle down. Akhmet was torn by conflicting emotions — to adjust owing to family in favor of those standing at power or retain human dignity. But Saule had the strong inner core regrading that issue. “Write! Write the whole truth!?” — she appealed to her husband, who wrote the diary.

Akhmet’s (Sergey Ufimtsev) grandson after revealing the grandfather’s diary went to Moscow, the harsh and cynical city. He found out from the diary how exactly his grandfather lost his fingers, knew about Saule’s bravery, about whom he had never heard. And that story would melt ice in young journalist’s heart (Olga landina) who was lost in her own life. Two worlds, two realities, two types of thinking... Strange as it may seem, the horrible tragedy — the Extermination of hunger of 30s disclosed the beloved people’s best qualities, bared the real values of life, call of duty, faithfulness, and self-sacrifice. Grief united the people forever, even after the death.

And in parallel our modern live where in metropolis people live artificial, “façade” life, being fixated on themselves and their problems. The picture, when during the jute the father cut his fingers to feed and save from hunger dying child, is shown to us. And modern parents gave the ill child to the orphan asylum. They say, it does not matter, they will have another child, but, as a result — divorce. The sufferings unite some people, and make others strangers.

"It is not a vaudeville, not a show, which are in a dime a dozen. Our aim — to show as the young family tries to stand out under severe conditions, how a person keeps his dignity and stays truthful to his ideals", the art director of the Russian Drama Theatre named after M. Lermontov, stage director Ruben Andriasyan said.

"We do not give any political assessment to the events of 30s, it is not the matter of theatre. We show the human values on which the world, in the essence, is held. The play’s author — a young playwright Olzhas Zhanaydarov. Olzhas is 35 years old, he lives and works in Moscow. A series of other works preceded the writing of a play, and a bit later the author matured enough to write “Jute”.

"I recollect well, as my grandfather told about great jute of the Soviet time. He spoke scantily, but I have always felt that behind that the great tragedy is hidden", Olzhas reminisced.

"For a long time I have been bearing the idea of the drama, and when, at last, I felt a great relief as if I fulfilled my mission. In the play basis is not my grandfather’s personal history. I wanted to transfer through the heroes common pain and peoples’ sufferings".

Not taking into account the big age difference (more than 40 years), the art tandem of the young playwright and maitre of the theatre direction turned out to be quite successful.

It is worth mentioning the actors’ play who literally fit into an image. At the preliminary display even men cried stealthily, which nothing to say about women. At the end of the performance the spectators applauded standing.