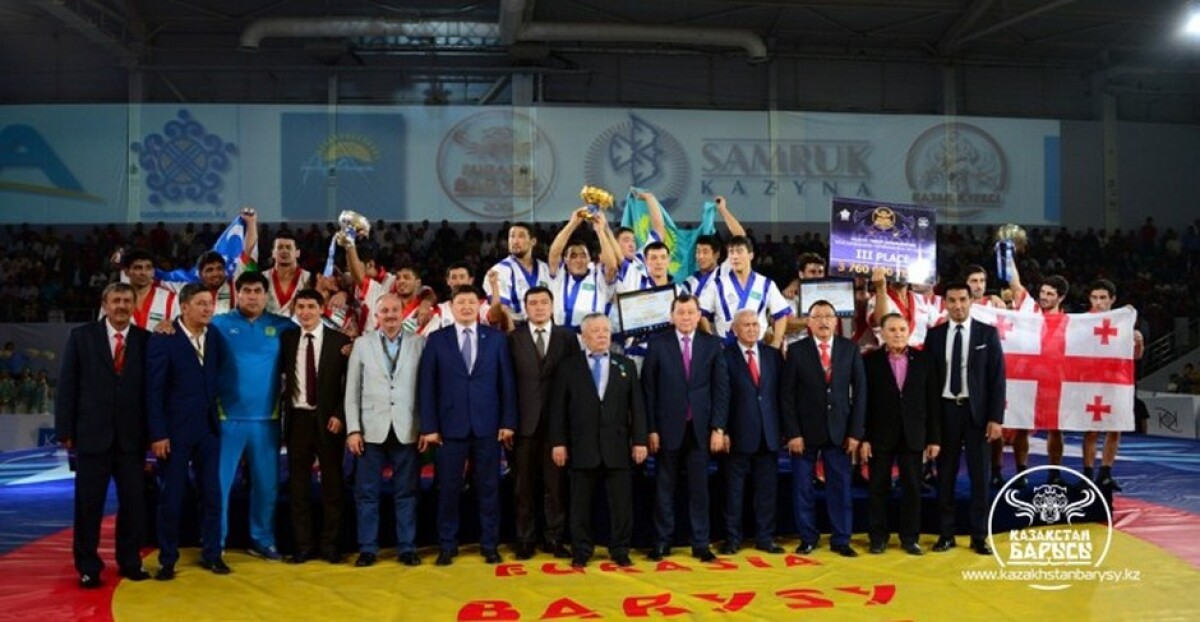 This type of combats throws back. From ancient times the nomads mastered the martial arts which helped them survive in continuous conflicts and martial acts.
The IIIrd International tournament “Eurasia barysy” dedicated to the 550th anniversary of the Kazakh khanate was held in Taraz. The competitions were carried out in the Palace of Sports “Taraz-Arena”.
According to the information of the Directorate of Physical Education and Sports of the Akimat of Zhambyl region, the teams of paluans (wrestlers) from Georgia, Kazakhstan, Kyrgyzstan, Mongolia, Poland, Russia, Turkey, and Uzbekistan participated in the competition. The International panel of judges of the tournament was also represented by the judges from the abovementioned countries. The chief referee of the tournament was Nurlybek Yermagambetov from Kazakhstan.
In each team per seven athletes acting in the weight categories to 55, 66, 74, 82, 90, to 100 kg and more than 100 kg. The format of the tournament is traditional – “line fight”. The common prize fund – 18, 8 mln tenge. 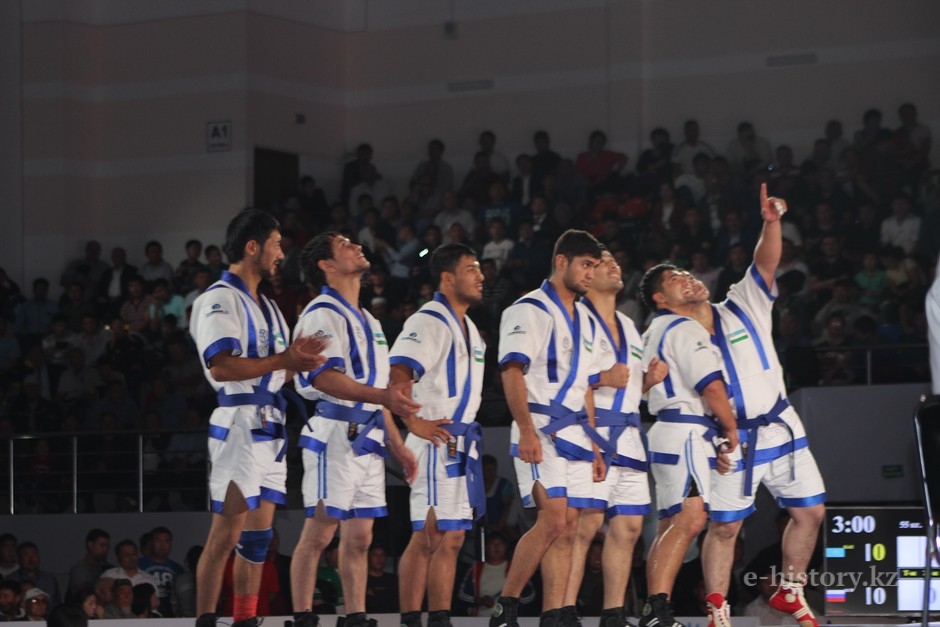 For the first time, the international tournament “Eurasia Barysy” started in 2013, and became the third project of the fund of development of Kazakh Kures “Kazakhstan Barysy” after the republican tournaments “Kazakhstan Barysy” and “Zhas Barys”.
This type of combats throws back. From ancient times the nomads mastered the martial arts which helped them survive in continuous conflicts and martial acts. In the year of the celebration of the 550th jubilee of the Kazakh khanate it is significant to underline the importance of Kazaksha Kures in the life of nomads. Nowadays, this type of combats became the sports which is not even becoming popular among the people of Kazakhstan, but also went global. For the last five years the national wrestling has been becoming popular.
The television version of the International tournament “Eurasia Barysy” was being broadcasted in 126 countries of the world by the TV channels “TRT Avaz” (Turkey) and “Boets” (Russia). Kazakhstan supporters observed the series of events on the air of the TV channels “Kazakhstan” and “KAZsport”. The given channels showed the replay. 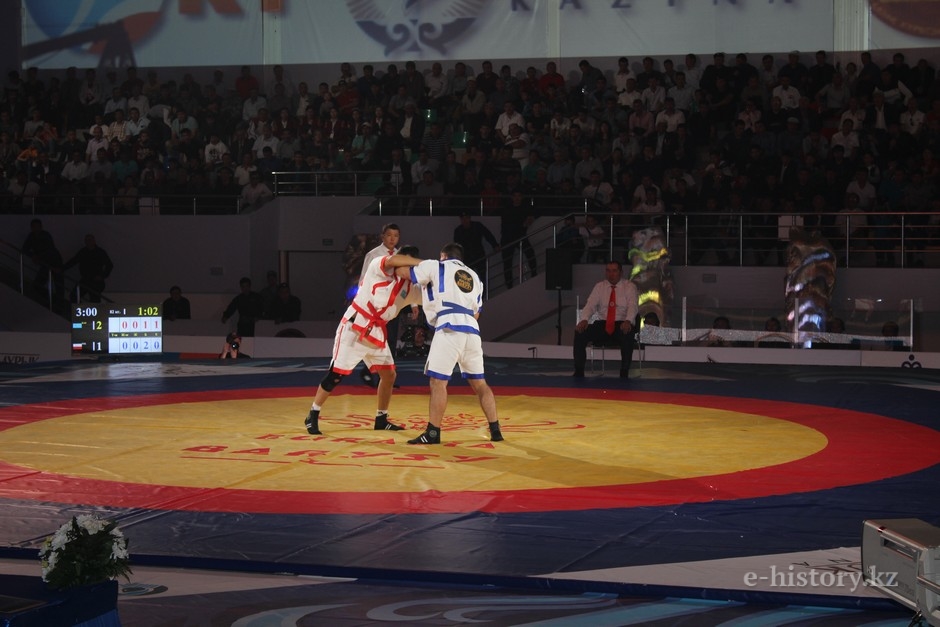 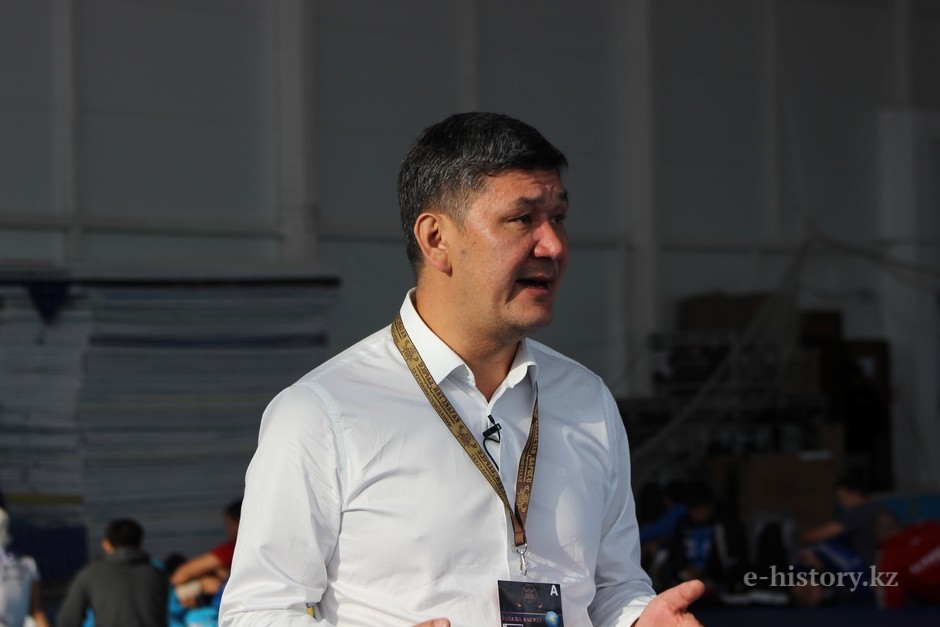 “In fact, I suppose that the third tournament which we assigned to the 550th anniversary of the Kazakh khanate is being conducted at the ground level. We see that from year to year the line-up of the national teams that come to us from abroad are becoming stronger and stronger. Perhaps, you yourselves noticed that there is a very strong national team of Georgia, Russia and Uzbekistan. Year in and year out the qualitative line-up is improving and it is becoming harder to become the winners in this tournament for our young sportsmen. Indeed, it is pleasant for me to know that the tournament is being broadcasted by Russian and Turkish channels in 126 countries. It says about the fact that we are of the point of interest not only inside the country, within Eurasia, but also in the whole world, and I hope that in several years we would become wide-known as the Japanese sumo”, Arman Shorayev, the President of the Federation in Kazakh wrestling, author of the idea of “Eurasia Barysy” said.
In the final Kazakhstan won against Uzbekistan with the score of 5 to 2.
By Miras NURLANULY
Use of materials for publication, commercial use, or distribution requires written or oral permission from the Board of Editors or the author. Hyperlink to Qazaqstan tarihy portal is necessary. All rights reserved by the Law RK “On author’s rights and related rights”. To request authorization email to or call to 8 (7172) 57 14 08 (in - 1164)
Қазақша Русский English
THE MOST WIDELY READ
Year
On How Kazakhstan Ended up as part of Tsarist Russia Recorded history of Kazakhstan. Part 2 The title of “Folk hero” was posthumously awarded to three veterans of the Great Fatherland War Union of the Archives and Library A great son of the Kazakh steppes Recorded history of Kazakhstan. Part 1 Burial mounds of the southwestern part of the Semirechye region The referendum on the Constitution is a significant stage of democratization Kazakhstan's participation in the Winter Olympics has a long history Rebooting a field of science and education Labels of the Golden Horde khans and Russian clergy A role of Buddhism in formation of Central Asian mythologies
Polls
Materials on the topic
Labels of the Golden Horde khans and Russian clergy
From the story of a blood feud
A role of Buddhism in formation of Central Asian mythologies
The referendum on the Constitution is a significant stage of democratization