Raymbek batyr is a determined defender of Qazaq interests 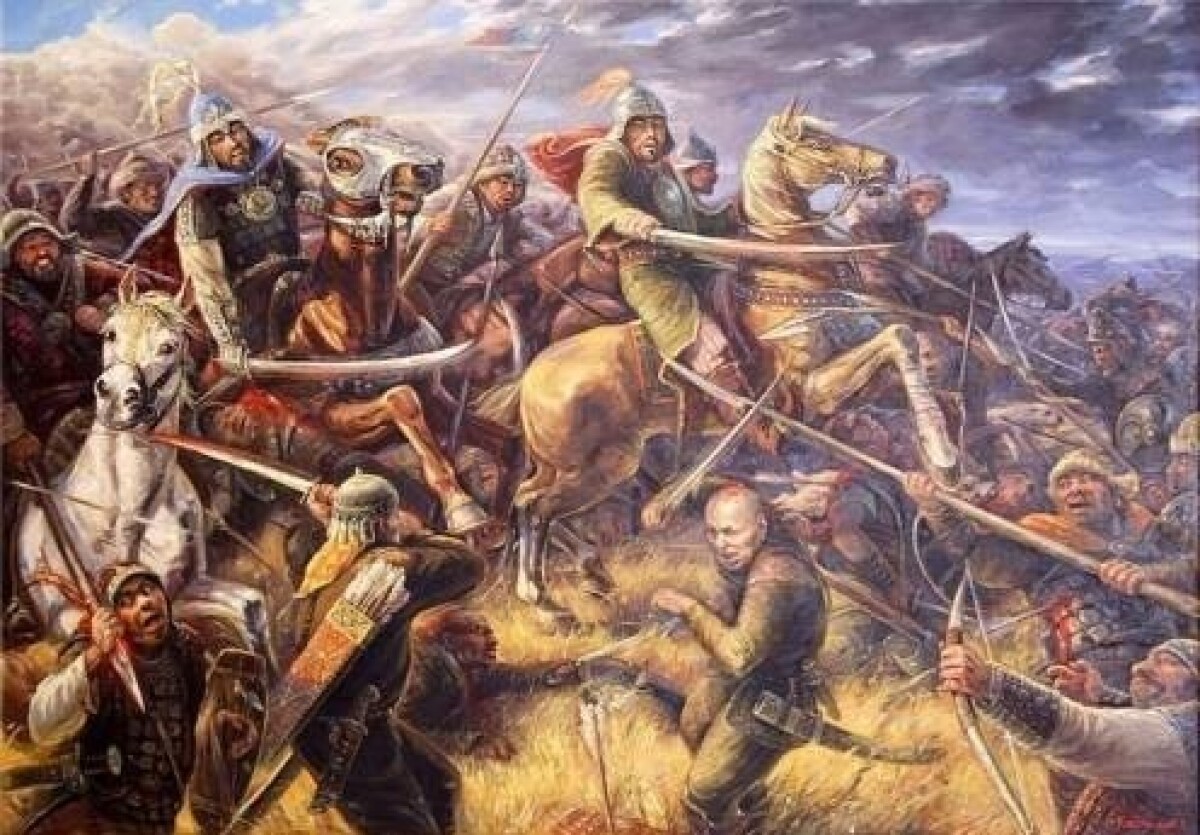 In the XVIII - the first half of the XIX centuries “batyrs” in other words “military leaders” had a significant social and political influence in Qazaq society.

The Turkic-Mongolian word “batyr”, “bagatur”, “bahadur” meant a brave, skilled warrior who understood the value of individual combat ability and challenged enemy warriors to duels before the battle, thereby demoralizing the enemy. Without any doubts the Russian word “bogatyr” comes from the Turkic-Mongolian word “bahadur”. Since the time of Genghis Khan, the title “bahadur” was awarded to the most prominent representatives of the militarized Turkic-Mongol nobility. That customary rule passed into the Qazaq Khanate. The honorary title “batyr” was received by khans and sultans for their personal bravery, as well as for the skillful leadership of troops in the fight against external enemies. In the XVIII century, the holders of the title were such Qazaq khans as Tauke, Kayyp, Abulkhair and Abylay. Subsequently, the Qazaq people called the “batyr” any warrior, regardless of their origin, who distinguished himself or became particularly famous in battles. He could be either from a poor family or have noble roots.

One of the Qazaq heroes, who, with his personal courage and leadership talent, became a batyr of a national scale and left a bright mark on the military history of Qazaqstan, is Raymbek batyr.

Raymbek was born in 1705 in the territory of modern Almaty region. He is from the tribe called “alban”. According to written sources, Raymbek’s grandfather Kangeldy (or Hansheldy) was known as a leader and diplomat. He took part in the Russian-Qazaq negotiations, and in 1734 he visited St. Petersburg as a member of the Qazaq delegation. 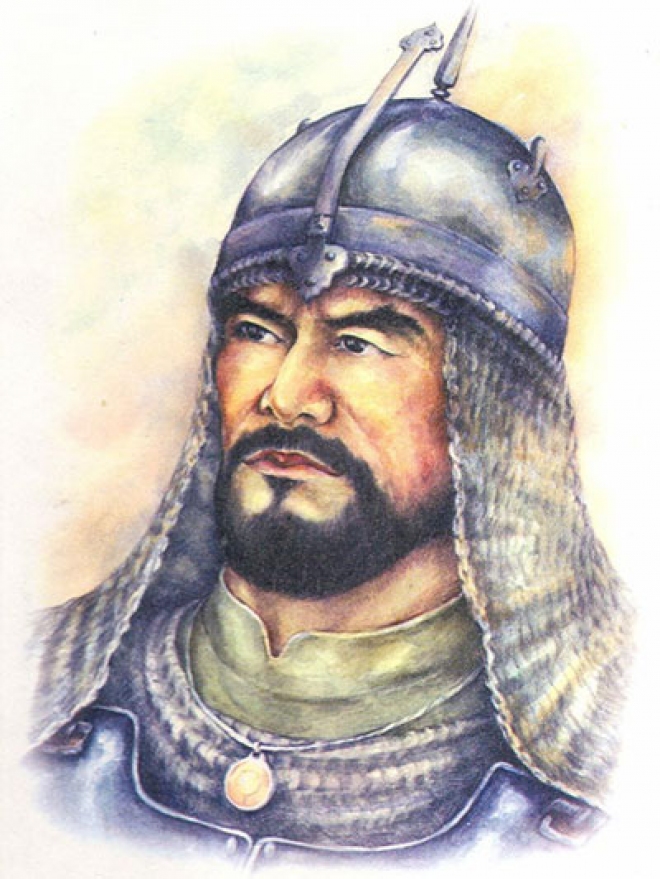 Since childhood, Raymbek grew up in a spirit of readiness to sacrifice all for the protection of the Motherland from the Dzungarian yoke. He was awarded the title of “batyr” when he was at the age of 17! By 1723, Raymbek had already been an experienced leader, and during the Dzungarian invasion headed the mobile Qazaq squads. He and other Qazaq batyrs, like Utegen, Malaysary, Satay and Nauryzbay had saved thousands of lives.

The turning point in the war against the Dzungars occurred in the second half of the 1920s. One of the major battles took place in 1726 on the banks of the Bulanty River, in the Kara-Siyyr area. When the enemy had penetrated deeply into the Qazaq territory, Raymbek’s troops suddenly struck blows from the right and left flanks. After that Qazaq troops dealt a crushing blow from the rear.

In 1729, another major battle took place in the southeast, in the Balkhash lowland, in the Anirakai area. A victory over the enemy became possible thanks to consolidation of efforts of all three Qazaq zhuzes. During those battles, the Qazaq warriors came out of the blue in a type of surprise attack that no one thought. They waited for the right moment to strike. Anirakai battle lasted a long time. Various Qazaq detachments fought in the battle, sometimes they had a dominating position in the fight, sometimes they had to retreat. For the decisive battle, the Qazaqs pulled fresh troops into the area and it turned into a general offensive. The cavalry attacks and rapid counterattacks were well-prepared for the coming battle. In the course of the battle an extended horse order, in necessary cases – high-density ring of foot soldiers were used. Implementation of these tactics had led to success. In the mentioned battles, headed by Abylay khan and Abulkhair khan, Khangeldy Syrymbetuly and Raymbek batyr took part. They led Qazaq troops along with another known Qazaq batyrs, like Bogenbay batyr or Kabanbay batyr.

Raymbek played a key role in the expulsion of the Dzungars from Zhetysu. He had shown outstanding courage, thereby he became known across the country. According to his contemporaries, he was 77 times wounded in battles, but his strong will let him fight for 33 years.

The power of the Dzungar empire gradually waned by the 40s of the XVIII century. Pressed from the east by the Chinese army of the Kangxi Emperor, and from the west by the Qazaq army, the Dzungars, especially after the death of Choros Erdeniin Galdan were forced to leave Zhetysu and to drop back to the Altai mountains. But the enemy garrisons tenaciously held their positions in the valleys of the Kaskelen, Tekes, and Ili rivers. It was necessary to put a lot of efforts and pressure to clear the mentioned territories of invaders.

The Dzungars resisted as long as they could, retreating they attacked nearby villages on the way. Significant areas around modern Almaty were under the Dzungarian rulers: Aganas and Aryskhan. The military council of the Qazaqs of the Senior Zhuz announced a decision to liberate occupied territories. Having learned about an impending attack of Aganas, Raymbek decided to push it back. Carrying the fight to the enemy, Raymbek batyr put them to the run and killed Aganas himself.

The next fortress taken was the command post of Aryskhan. At night Raymbek’s warriors used to recognize each other with a help of a pass code “Raymbek”. After that the pass code “Raymbek” became a battle cry of “alban” tribe. Having been defeated, the Aryskhan’s warriors had no choice but to accept a ceasefire. That truce was extremely necessary for the Qazaq warriors, too... The battles were very hard.

Later, tensions between Qazaq khanate and Dzungar khanate escalated again. After fierce battles in the 50s with one of the powerful Dzungarian princes named Torekhan, Raymbek batyr, Bakai batyr and Kabanbay batyr managed to force Dzungarians out of Khorgos and Narynkol. As a result, the Dzungarian rulers asked for a truce again. The Qazaq rulers agreed, since most of the territory had already been at their disposal. Both Parties reached an agreement to exchange prisoners within two months. They agreed to remain the wealth and property with the Qazaqs. Besides that, Parties identified land use boundaries. Perhaps the pliability of the Dzungars can be explained by the fact that, starting from 1753, a split occurred in the leadership of the country and feuds often took place. In 1757, there was a severe political crisis in Dzungar khanate, and in 1758 the Chinese army destroyed it.

Raymbek played an important role in the final forcing the Dzungarians out of the southeastern borders of the Qazaq khanate. He made a great input in establishment of the borders along the Tekes and Karkara rivers. The huge red stela erected by him in Narynkol became a memorial sign in defining the Qazaq-Chinese border.

Raymbek proved himself as a brave warrior and a skilled diplomat. Realizing that conflicts between nations could cause bloodshed, Raymbek convinced the warring parties with a wise word. He conducted long and difficult set of negotiations with the Chinese protege Manju Khan. His tactics allowed him to achieve good results.

Over time, the name of Raymbek became a symbol of a tribe “alban” and acquired a sacrosanct aura. He was called by people “a saint”, when he was still alive.

Raymbek batyr’s life took place at the crucial stages of Qazaq history. Having joined militia groups since childhood, Raymbek was an eyewitness to the tragic events of the Great Disaster, the Dzungarian domination. He became a witness and participant of the collapse of the Dzungar khanate.

Raymbek batyr spent much of his life on campaigns. He knew both the bitterness of defeats and the joy of victories when, together with Abylay khan, Kabanbay batyr, Karasai Batyr and many other comrades-in-arms, he raised the falling banner of the Qazaq khanate. In fights and campaigns with Raymbek there was his favorite horse Kokmoynak and a big white camel. 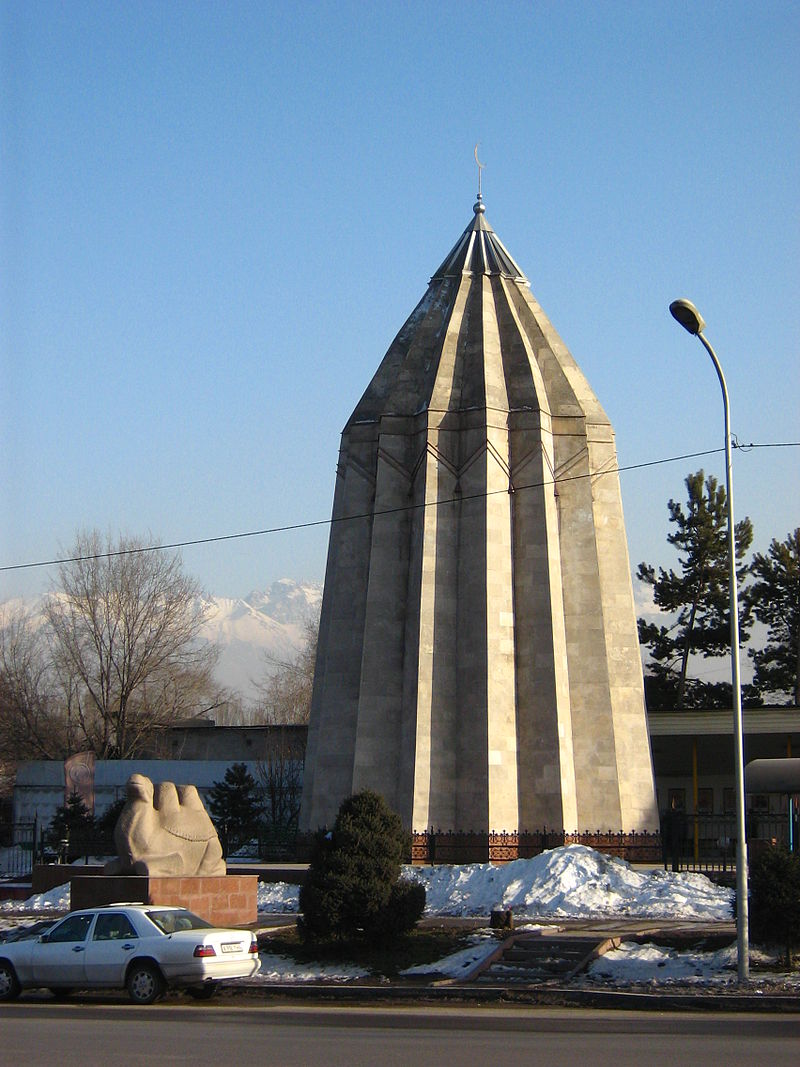 Old wounds received in battles made him feel worse. The exact date of Raymbek’s death has not been established yet. But sources of those years report that, when he felt that very soon he would die, he invited all his friends and asked them to place his body after his death on his white camel and show the animal the way to the West. Raymbek batyr bequeathed to bury him in the place where the camel would stop. There is a memorial complex and a figure of a sitting camel on his grave at present moment. The place of his burial became an object of pilgrimage for the Qazaq people. Currently the memorial complex is situated in the eastern borders of Almaty.