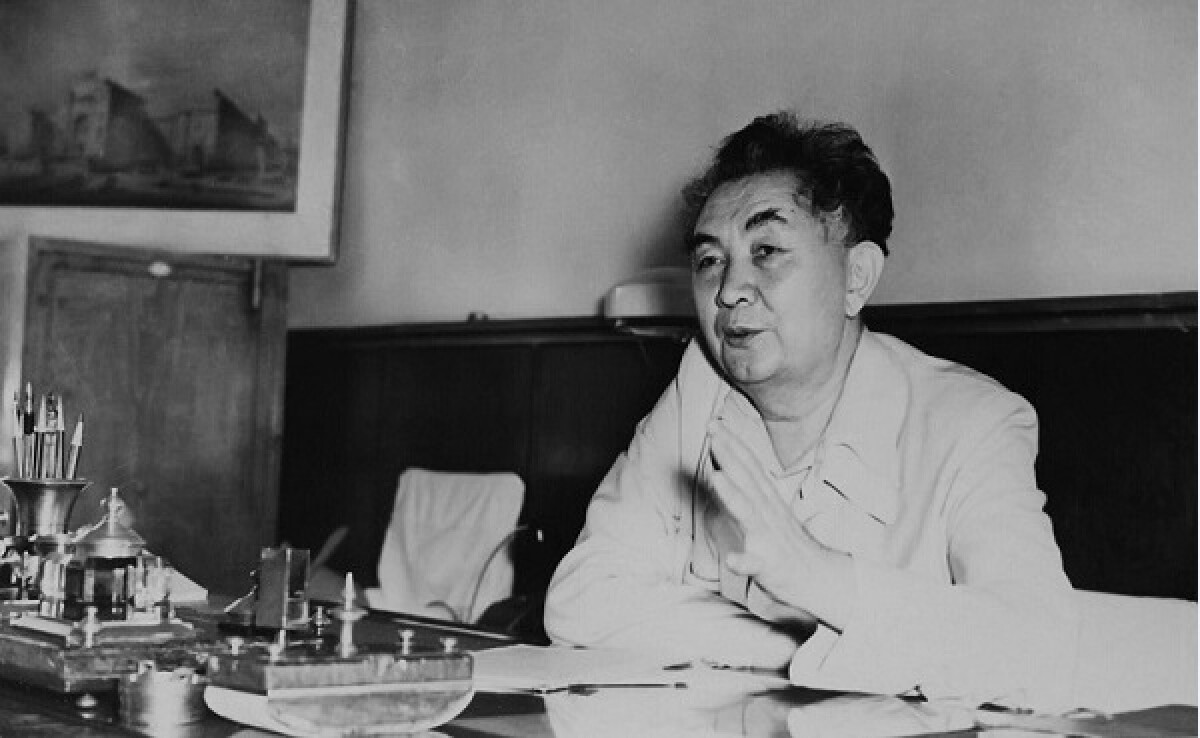 An Academician Kanysh Satpayev was born 120 years ago

A future scholar received his primary education in a local school. He had a certificate of graduation the Pavlodar two-year college, when he was 15 years old. He got knowledge at the Semipalatinsk seminary and after that worked as a teacher and later as a people's judge. It took him two years.

However, the thirst for knowledge, along with excellent abilities and strong will pushed the future scientist to move forward. Upon the recommendation of the Semipalatinsk city administration, Kanysh Satpayev entered the Tomsk Institute of Technology in 1921. He studied at a Mining Faculty.

He had chosen this area of mining engineering because a well-known geologist, a professor at the Tomsk Technological Institute, Mikhail Usov influenced on him during his visits to Qazaqstan. The scientist came to the settlement, where Kanysh Satpayev lived to heal himself by drinking fermented mare milk, called “kumys”. His amazing stories about the natural treasures, hidden in the depths of Qazaqstan, about the history of the earth gave impetus to Kanysh Satpayev to choose his future profession.

He was known and respected among the intellectual set of the University. His teachers at the Tomsk Institute of Technology were outstanding researchers of Siberia, Mikhail Usov and Vladimir Obruchev. It is under their influence that the idea of a comprehensive study of fields and certain regions of Qazaqstan had been growing in Kanysh Satpayev’s brain. After the second course, he participated in the field work of Mikhail Usov in Qazaqstan. It was his good fortune to get to know the unique personality of his teacher, his iron self-discipline, his manner of working in the field, his teacher’s exceptional ability to present in a simple form a deep analyses of natural phenomena.

In 1926, Kanysh Satpayev defended a thesis project on the topic: “Geological research and exploration for copper in the Mayninskoye field of the Minusinsk District”. The choice of this topic for a long time predetermined the main circle of interests of the young mining engineer. He saw the far-promising prospects of Qazaqstan’s resources for copper ores already at that time. He understood the need of studying and developing that area.

In the autumn of 1926, the young geological engineer Kanysh Satpayev arrived to Karsakpay. He was assigned a difficult task to launch and to carry out the first stationary geological exploration works at the copper deposit of Zhezkazgan and coal deposit of Baikonur.

Inspired by strong belief in Zhezkazgan’s bright future and, thanks to Kanysh Satpayev’s perseverance and indomitable energy, a team of young exploration geologists led by Kanysh Satpayev, carried out its work with great enthusiasm and, despite the many constraints of those years, the team was able to achieve the desired results in three years.

By the end of 1931, large stockpiles of ores were discovered in the depths of Zhezkazgan, it was ranked as the first largest copper mine in the Soviet Union. In 1938, it was decided to design and start building the Zhezkazgan Copper-Smelting Plant. Kanysh Satpayev got the highest award of the Soviet Union, the Order of Lenin for his outstanding achievements and main progress in regional geological exploration and mineral resources survey of Zhezkazgan and Ulytau area in 1940. A young mining engineer-geologist Kanysh Satpayev headed a Comprehensive Geological Service in the Zhezkazgan and Ulytau region for fifteen years.

However, his life path was not always strewn with roses, there were years of unfair persecution, grief and adversity. So, in the thirties, three members of Satpayevs’ family were repressed and shot. Kanysh Satpayev’s blood brother named Gaziz (1892-1937), before the Revolution, studied at the Semipalatinsk gymnasium and was preparing to become a healthcare worker. Kanysh loved and respected him very much. Another member of his family Karim Satpayev (1897-1936) became a victim of injustice, too. He was an educated, charming man, a talented violinist, an organizer of ethnographic events. Abikei Satpayev (1881-1938) was a schoolmaster, the first Qazaq, who taught Russian Language at Qazaq school.

Nevertheless, Kanysh Satpayev remained optimistic in every difficult situation, he never lost faith in himself and steadfastly fought for the truth.

In the fall of 1941, Kanysh Satpayev entered the office of the Deputy Chairman, and a year later he became head of the Qazaq satellite office of the USSR Academy of Sciences. Among the major problems solved by geologists of Qazaqstan under the guidance of Kanysh Satpayev during the war years was the uninterrupted supply of metal, coal and oil to the front.

Qazaqstan and Kanysh Satpayev in person made a meaningful contribution to the successful ending of the Second World War. He used to say, that “Nine out of ten bullets, hitting fascist invaders were cast from lead, mined in Qazaqstan”.

The war against fascism demanded the restructuring of the Qazaq branch of the Academy of Sciences, headed by Kanysh Satpayev. At that difficult time, he initiated copper smelting at the Balkhash plant by engaging in recycling Zhezkazgan ores. He did a masterful job on managing work of Qazaqstani researchers, scholars and was involved in the work on the expansion and optimization of the raw material base of the metallurgical enterprises of the Rudny Altai and the South Qazaqstan.

In the harsh reality of war, when Nazi Germany seized the only active Nikopol manganese deposit in Ukraine, blocked the roads to Chiatura in the Caucasus and the Ural tank factories claimed for a lack of raw materials for armor steel production, Kanysh Satpayev and his associates made the greatest scientific feat. At the beginning of 1942 there was a сode cable, signed by the Chairman of the State Defense Committee Joseph Stalin, which had imposed on geologists an obligation urgently to find the manganese deposit required for the production of armor steel. On the same day, all the geologists and scientists who were in Alma-Ata (at present time Almaty) were invited to the Government House on behalf of the First Secretary of the Central Committee and were given a task: by the next morning to come with proposals on this matter. It was a great surprise for everybody who came to a meeting next day to see Kanysh Satpayev, standing up from his chair. He firmly stated that ferromanganese ore necessary for the front was available in sufficiency in a small town called Zhezdy, located 45 kilometers away from Zhezkazgan station.

After a chemical test performed on a sample of ores from Zhezdy deposit, preparation for ore mining had begun. Ore processing is a 24 hour operation. The miners worked tirelessly by the end of the war. Thousands of people worked on construction sites, various equipment was delivered. The tension was increasing every day. The State Defense Committee received reports from the builders of Zhezdy on a regular basis. As a result of implementation of tough measures and the heroic efforts of local people, after 38 days from the beginning of the preparatory work, the first tons of precious manganese ore were shipped, in three months there were built a new railway, a mine and a working camp in Zhezdy.

On June 1, 1946, the Qazaq Academy of Sciences was established. Kanysh Satpayev was elected as the first President of the scientific organization. He remained to be a Director of the Institute of Geological Sciences. The establishment of the Qazaq Academy of Sciences was a historical act of great political importance and a big step in the development of science and culture of the country. By that time there were already more than 1,500 scholars, including 78 doctors and professors, about 200 candidates of science in the scientific center.

One of the outstanding merits of Kanysh Satpayev is a creation of the “Qazaqstan school of geologists”. In a short period of time, the young organization had developed over 200 interesting works, put into practice in national economy. It is worth to mention that Kanysh Satpayev was the author of the most of the realized projects.

A number of new academic institutions have been opened. Kanysh Satpayev was a member of many state committees and commissions, the editorial boards of scientific journals, political and scientific societies. Being a President of the Academy of Sciences, he put a lot of effort to establish and develop international contacts with Russia, Ukraine, Uzbekistan, Georgia, Kyrgyzstan, Tajikistan and other countries. Kanysh Satpayev wrote a lot. He had written over 800 printed works published in Russian, Qazaq, Chinese, Arabic, English and other languages.

Kanysh Satpayev was a model of a modest and sincere human being. He was an eloquent orator and was very tall. He stood out in a crowd and he was always noticed first and remembered. There was, for example, such a case in England, in 1947, when a Qazaq scholar visited this country as a member of the Soviet delegation. During an unofficial reception, Winston Churchill, the former British Prime Minister asked him, if all Qazaq people were as tall as he was. He answered: “Oh no, Mr. Churchill, I am the smallest among Qazaqs, people of my country are taller than me!”. His response expresses his respect and love for the people of Qazaqstan.

Author: Aizhan Abilda
Use of materials for publication, commercial use, or distribution requires written or oral permission from the Board of Editors or the author. Hyperlink to Qazaqstan tarihy portal is necessary. All rights reserved by the Law RK “On author’s rights and related rights”. To request authorization email to or call to 8 (7172) 57 14 08 (in - 1164)
Қазақша Русский English
THE MOST WIDELY READ
Month Year
The top of pyramid stores the yurt
On How Kazakhstan Ended up as part of Tsarist Russia Kunaev Dinmukhamed Akhmedovich Recorded history of Kazakhstan. Part 2 The title of “Folk hero” was posthumously awarded to three veterans of the Great Fatherland War Union of the Archives and Library A great son of the Kazakh steppes People who eat horses will kill you Recorded history of Kazakhstan. Part 1 Burial mounds of the southwestern part of the Semirechye region The referendum on the Constitution is a significant stage of democratization Rebooting a field of science and education Kazakhstan's participation in the Winter Olympics has a long history
Polls
Materials on the topic
Labels of the Golden Horde khans and Russian clergy
From the story of a blood feud
A role of Buddhism in formation of Central Asian mythologies
The referendum on the Constitution is a significant stage of democratization