Home News History in 5 minutes The Deportation of People during the War. Part I

The Deportation of People during the War. Part I 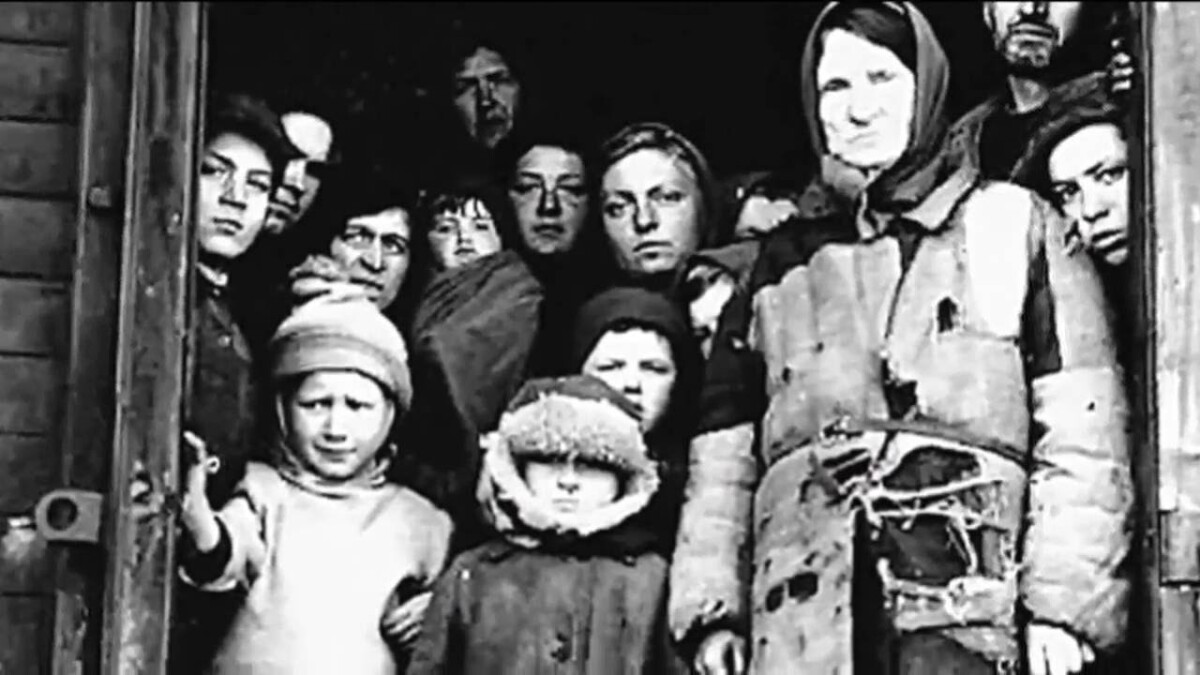 The academic knowledge on the aspects of totalitarianism as a unique political and social phenomenon has not expanded accordingly due to a wide range of reasons. The regime had played an ominous role in the fate of people during the Soviet era, including deported people in the republic, which changed the ethnic and demographic parameters in the country. President Nursultan Nazarbayev has repeatedly stressed on the importance of coming up with an effective democratic mechanism for ensuring academic works on national processes, taking into account the dark past, and specifically drawing the attention of social scientists to the fact that "the problems of interethnic relations can and must become key in our current research. The society desperately needs a clear description of the processes taking place in this field, not only in Kazakhstan, but throughout the world, knowledge of the possible prospects for the formation of inter-ethnic relations. Finally, public institutions and government bodies need specific recommendations based on social surveys and taking into account regional specifics of national policy implementation. While such studies are extremely scarce, scientific thought can not depart from the stereotypes of the past, a superficial, ascertaining approach to the complex phenomena of our life" [1].

With the outbreak of the World War II, the Germans who lived in the Volga region were the first to be deported. The Decree of the Presidium of the Supreme Soviet of the USSR "On the abolition of the German Autonomous Region of the Volga region" was issued, along with resolutions "On the location of the Germans in the Volga region in Kazakhstan" and "On the resettlement of Germans from Georgia, Azerbaijan and the Armenian SSR" that were adopted as well. Almost all people of German nationality were deported: Volzhans, Muscovites, Germans from Ukraine, the Caucasus, officers and soldiers were recalled from the front. The Germans were the largest ethnic group of all subjected to forced resettlement. 1209430 Germans were resettled [2, p.42]. Of these, according to the State Archives of the Karaganda Region, 225 to 350 thousand were deported to Kazakhstan. According to other sources, over 420,000 people of the German population were deported to Kazakhstan during the war [3, p. 8]. According to the Archives of the Committee on Legal Statistics and Special Accounts of the General Prosecutor's Office of the Republic of Kazakhstan, as of December 10, 1941, there were 34,970 people [4], and on January 5, 1942, there were 382,102 people [5]:

"With the reception of Germans from the Saratov, Stalingrad Regions and the Republic of Germans in the Volga region" in the regions of Kazakhstan, regional headquarters were set up to receive, accommodate and arrange immigrants-Germans [6, P.97-98]. However, regional organizations were not ready to receive and resettle Germans-settlers. Built for the planned settlers, the houses, before their arrival, were transferred to accommodate the evacuated population from the western regions of the country. By order of the Council of People's Commissars of the USSR on November 21, 1941, 1677 families of Germans were deported from the Kuibyshev Region, and 6 thousand Germans from the Kalmyk ASSR were also deported [7].

It was almost impossible to implement the Center's installation for placing such a huge number of deported Germans on the ground. The termination of navigation along the Irtysh and the remoteness of the railways, as well as the arbitrariness of the local authorities, put the deported Germans on the verge of starvation and extinction. And here the decisive role was taken by the initiative of local residents, in whose homes they were mostly housed.

The policy of the state was aimed at placing Germans in the countryside. Thus, an attempt was made to fill the shortage of rural labour resources.

The liberation of the territory occupied by the Nazis continued the eviction of representatives of deported peoples. First of all, it had, again, to do with the German population. Between 1944 and 1945, the German population who lived in the liberated territory of Ukraine, Belarus and the Baltic countries there since the pre-war times was evicted. All of them were sent for permanent residence in the regions of Siberia and Kazakhstan. By the end of 1945, about 9 thousand Germans from the Western regions of the country were additionally accommodated in Kazakhstan [3, p.2].

The number of Germans deported to Kazakhstan during the Great Patriotic War was unstable, as most of them were mobilized in the labour army and mainly in the coal industry of the city of Karaganda. Between 1942 and 1943, 103733 Germans mobilized construction, coal, oil industry and NKVD camps, of which 92438 people left Kazakhstan, including 30403 women [8]. Moreover, the largest number of mobilized Germans accounted for the North-Kazakhstan, Pavlodar and East-Kazakhstan regions.

It should be mentioned that in the initial period of the resettlement of the Germans, an unfavourable political situation took place, which was the result of their difficult material and everyday situation. Instructions for the reception and installation of Germans were provided for the issuance of livestock for personal use by exchange operations in exchange for the inscribed personal receipts from settlers. However, documents show that "the overwhelming majority of them came without proper registration for the delivery of both their means of production and food to the state" [6, P.109]. The difficult material situation caused the revival of anti-Soviet sentiments, the dissemination of various rumors, defeatist agitation, disruptive work on the collective farms, and in connection with this, the Communist Party of Kazakhstan obliged all party organizations to pay special attention to political work on collective farms where there are and where Germans migrate and ensure the conduct of political work among them.

One of those who suffered a violent deportation was the Karachai people. They had their own autonomous region. In the beginning, it was created as the Karachay-Cherkess Autonomous Region, formed in the Stavropol Territory of the RSFSR on January 12, 1922.

During the war, the Karachais, along with other people, had actively taken part in the battles against Nazi Germany. Nevertheless, on October 12, 1943, by the Decree of the Presidium of the Supreme Soviet of the USSR, the Karachayevskaya Autonomous Region was liquidated; on October 4, 1943, a Decree of the Council of People's Commissars of the USSR was passed on the eviction of Karachais. Within a short period of time, 14,774 families with a total number of 69,267 people were deported from the region [3, p.10]. According to the data provided by the State Archives of the Karaganda region, about 70 thousand Karachay people were deported. According to the Archives of the Committee on Legal Statistics and Special Account of the General Prosecutor's Office of the Republic of Kazakhstan, as of January 1, 1945, there were 10,505 families in the Republic with a population of 40,767 people [9]. At the end of the war, on July 1, 1945, there were 39,431 people (10,350 families) [10]. The eviction was accompanied by harsh measures and was carried out in a short time. After the restoration of the Karachay-Cherkess Autonomous Region in 1957, about 90% of the Karachais from Central Asia and Kazakhstan returned there.

The tragic fate of deportation has also befallen the Balkarians. As it is known, the Kabardino-Balkarian autonomous region was formed in the RSFSR on January 16, 1922, and on December 5, 1936 it was transformed into an autonomous republic. Balkarians, among other people, were mostly at the front. In January 1943, the territory of the Balkars was liberated, and they themselves were falsely charged with their historical homeland.

The decree of the State Defense Committee on the eviction of Balkarians was adopted on March 5, 1944. In total, as a result of the deportation, 4660 Balkar families of 25 thousand people arrived in Kazakhstan. But the number of deportees fell sharply and as of January 1, 1945, there were 20,288 people (5,405 families).

Soon the same fate befell the population of the Kalmyk ASSR. October 28, 1943 Kalmyks, according to the Decree of the Presidium of the Supreme Soviet of the USSR and the Decree of the Council of People's Commissars of the USSR, were deported. Despite the fact that the Kalmyks, together with other peoples of the USSR, rose to fight the enemy, 21 people were awarded the title of Hero of the Soviet Union for military merits, and 8,000 Kalmyks were awarded orders and medals on charges that were brought against the peoples of the North Caucasus. They were evicted from their places of permanent residence. As of January 1, 1944, on the territory of the republic, the number of Kalmyks according to the Archives of the Committee on Legal Statistics and Special Accounts of the General Prosecutor's Office of the Republic of Kazakhstan amounted to 2,233 people (680 families) [11, p.5]. And according to the NKVD of the KazSSR on January 1, 1945 - 2541 people (760 families).

7. Archive of the Committee on Legal Statistics and Special Accounts of the General Prosecutor's Office of the Republic of Kazakhstan. D 7.

8. Data of the Archives of the Committee on Legal Statistics and Special Accounts of the General Prosecutor's Office of the Republic of Kazakhstan.

11. Archive of the Committee on Legal Statistics and Special Accounts of the General Prosecutor's Office of the Republic of Kazakhstan. F. 16, D. No. 83.