Once upon a time there were two soldiers 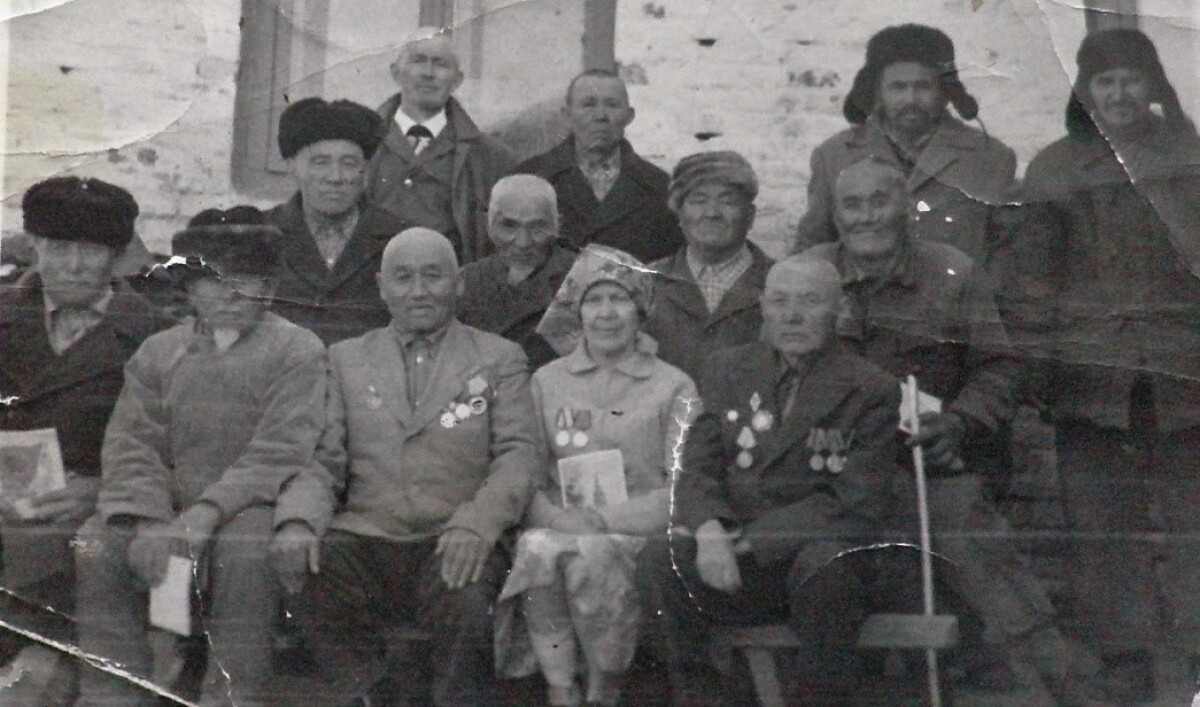 During the Second World War showed their courage and heroism our compatriots-Kazakhs of the Omsk region where today about 100 thousand people live. Only from one village, consisting of 6 auls of the Amangeldy collective farm in the Maryanovsky district of the Omsk region, 176 people were drafted. Of these, 72 people disappeared and died at the fronts of the war (documents from the front arrived), 52 people returned from the battlefields to the aul of Dombay, and there is still no information about the others.

Here we would like to briefly talk about the heroism of the two men who committed genuine heroism. Within the framework of the presidential program "Tugan Zher", it is our duty to remember our fellow tribesmen scattered throughout the various republics of the former USSR and foreign countries. They are part of the Kazakh nation and its glorious history, bearers of unique national code. Therefore, it is no coincidence that the portal "NDH" of JSC "QazContent" launched a program of studying and promoting the history and culture of foreign compatriots.

In one of the spring days of 1965 a correspondent of the newspaper “Pravda” arrived in the aul of Dombay in the Maryanovsky district. A man in a black leather coat asked: "Do we know Almukh Maemirov?" Adults and children accompanied the correspondent to the office manager Smagulov Ramazan, after a short introduction to each other the manager sent him to the field where one of the most modest residents of the aul A. Maemirov was holding snow on his tractor at that time.

From conversations it was clear that the inconspicuous and taciturn tractor driver Almukh Maemirov during the war was a mortar gunner, as he was also called - a sniper, and in every battle he destroyed machine gun crew, the infantry of the enemy. Every time after the battle, he wounded, contused, got into the hospital, and each time the command represented him to the award, to the same Order of "Glory" of the third degree. But the reward did not find the hero, as after the recovery he each time fell into another part, even on another front. And so it was repeated three times. This correspondent, working in the archives, drew attention to the repeated name and similarity of situations, and, thanks to his efforts, the soldier found his front-line reward. Given this circumstance, the Presidium of the USSR Armed Forces awarded him with the orders of "Glory" of all degrees.

But his life has not changed. With his large family, he lived in a small dug-out, shy to even ask for a solid house in the central manor. He believed that families of veterans who did not return from the war deserved improvements in housing conditions more than others.

The hero fought near Leningrad, Volkhov in the 54th Army of General Fedyuninsky. In defending the approaches to the city of Volkhov, he was awarded the first Order of Glory of the third degree for showing courage and heroism. The second order was awarded for the liberation of the city of Riga, he destroyed several bunkers and three guns of the enemy, since then he was called the sniper of the 20th Guards Rifle Regiment. The next Order of Glory was awarded for the fact that on the approaches to the city of Aust in Germany, Almukh destroyed the German infantry column.

He was demobilized in November, 1945. With his wife he brought up 8 children.

Musabayev Shakhuali (1918-1985) was very modest; a front-line soldier awarded the Order of Alexander Nevsky and the Red Star, graduated from the Alma-Ata Pedagogical Institute before the war and managed to work in the Kzyltu school of Almaty region as a history teacher. He was a participant in Berlin assault.

For courage and heroism Musabayev Sh. was presented to the title of "Hero of the Soviet Union", but, according to archival data, the commander of the 1st Guards Tank Army, while the Guard Colonel-General M. Katukov and a member of the military council of the Army of the Guard Major-General N. Popel refused, replacing it with the Order of Alexander Nevsky.

The Sandomir bridgehead, occupied by the platoon of a brave junior lieutenant Musabayev Shakhuali, was later used as the initial area for the offensive in the course of the Vistula-Oder operation.

"... during the crossing of the San River on July 22, 1944, Comrade Musabayev, despite the strong enemy fire, was the first of the entire brigade to cross the river, his example was followed by fighters of the 3rd company. A total of 10 people crossed. The enemy, who was entrenched on the outskirts of the village, conducted a hurricane fire and did not give the chance to force the river to the rest. Then Musabayev with a group of fighters came from the flank broke into the enemy trenches, with hand grenades, fire from automatic weapons they destroyed up to 70 soldiers and officers of the enemy and captured 22 prisoners, 4 easel and 5 hand machine guns, the remaining soldiers of the enemy fled. By this time the battalion and other units had crossed the Vistula River… In the battle for the village of Samotno, Comrade Musabayev was the first to break into the location of the enemy's convoy, despite the wound, continued the battle, he one destroyed 15 enemy soldiers, the rest fled leaving the convoy." 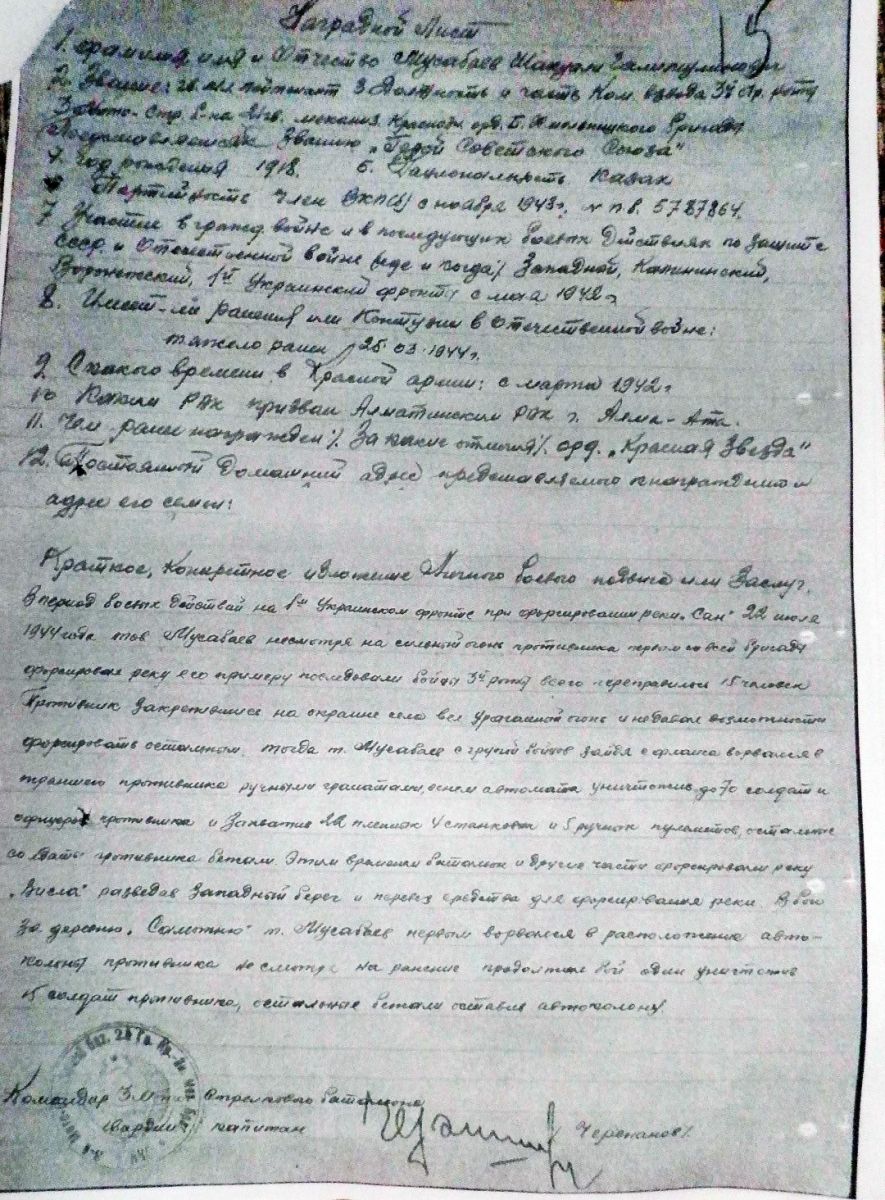 Editor's note: There are still many white spots in the history of our country, which are waiting for their coverage. Portal “NDH” considers it its duty to cover forgotten pages of history, thus giving a duty to the memory of the older generation. We express the hope that such publications will find the proper response from our audience.

The main photo depicts war veterans of the aul of Dombay.