Sickle and hammer - death and hunger 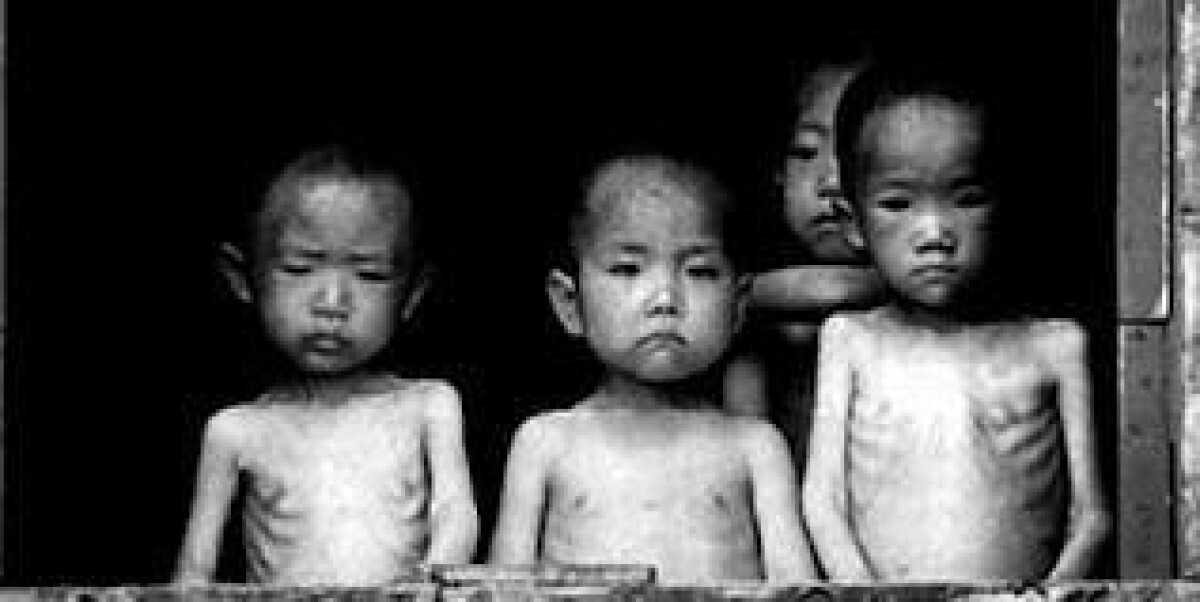 The famine in Kazakhstan in the 1930s killed more than a million people. Another about a million emigrated to neighboring countries

The editor of the literary and art magazine "Prostor" Valery Fedorovich Mikhaylov tried to cover this topic from all sides in his book "The Chronicle of the Great Jute", which was published in May, 1990. In it, V. Mikhaylov denounces the perpetrators provoking the famine in Kazakhstan, cites rare documents, letters of both ordinary people and the powerful of this world.

Here are excerpts from the book, which are testimonies of people who managed to escape in this difficult time.

"In childhood, when I was naughty and mischievous, my mother kept saying the same mysterious words angrily: "Oh, it would be better if I left you". And she pronounced it so strangely, that I involuntarily quieted down. I could not understand anything: where was she supposed to leave me, why me? And I did not dare to ask why.

Then, when I grew up, and I turned fifteen, I once asked my mother why she always says this incomprehensible phrase. Mother looked at me thoughtfully, wiped her tears and told such a story.

It was early spring of 1933. The most horrible time; the famine killed off almost all of our aul (we lived in the Tulkibas region of Southern Kazakhstan). Fleeing from certain death, my mother decided to go to her relatives in the neighboring village. She was carrying my little sister in her arms, and I - I was then two and a half years old - walked alongside, holding on to the hem.

We left in the evening. The kolkhoz melon field was behind the outskirts of the village. Only we set foot on the path, we met a pack of wolves. By that time, domestic cattle had long since ceased to exist for a hundred versts in the district, and the hungry beasts were flocking to the pack and attacking people everywhere, which was never the case before.

Mom screamed, began to call for help, but there was no one nearby. The wolves surrounded us. They stand, howl and tear the earth with claws. Mother was faced with a terrible choice - either we will be torn to pieces, or she will leave one of the children, and she herself with another child will try to escape. 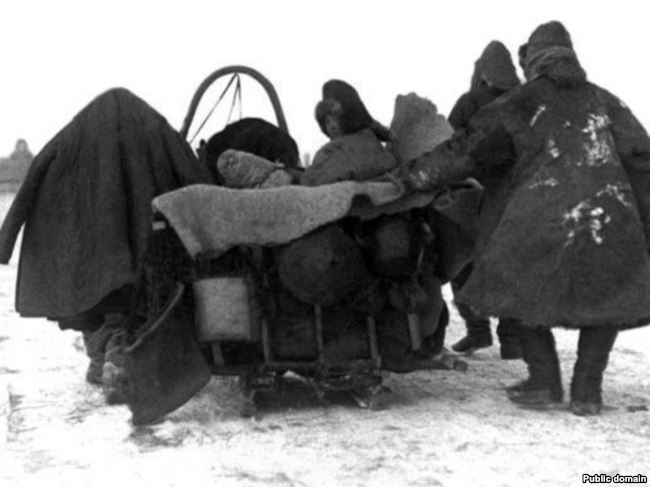 Of course, in the Kazakh mind, it is for the time being: if you save the boy - and the whole family will survive. Mom decided. She put the girl wrapped in a diaper on the ground, and picked me up, dragging from exhaustion. And she ran forward.

Then, when she returned with the people - someone armed with a gun, someone with a stick - there was no one there. Only the rag was lying around, covered in blood.

To her, my younger sister, I owe my life.

I asked my mother then (I did not understand much yet!) why did she not leave me. She said: "The son was more necessary..." It is unbearable to imagine what she felt and what she thought about herself all her life...

From tears my mother then completely dried up..."

From the act of survey of the settlement of "Kazgorodok" of the North Kazakhstan region (spring, 1932):

"Most people were exhausted. They scavenged, somehow: bare bones, of which soup is brewed. In addition, dried and sometimes dressed skins are used for food. In the district there is a family eating dog meat. Near the house a mass of dog skulls was found. Several paws floated in the cauldron. In the village of Shoky, where there were 144 yards, there were about 60 of them left. People went to look for food. Most of the survivors at the time of the survey were eating carrion, decaying meat, bone soup, porridge from bran and welded skin, 15 families completely exhausted and swollen. The collective farms have no funds to support their lives. Bigar Kigarin, a construction worker, receives a ration for one soul. His wife and three children are eating porridge and water. In the family of Kozhan Konzhebaltov there are six souls. At the time of the examination, a boy of ten years rummaged in dung, took out something and sucked. Sagandykov's family, three souls, they eat dog meat".

Gafu Kairbekov: "We, children, were not allowed to leave the court. It was strictly forbidden to go out. We looked in the crevice of the gate, what's on the street. Curious! On the contrary - the old clay fence, and people. Someone leaned back, someone lay. They waited ... The cattle in the yard were exhausted, almost falling off their feet. Cows were born dead calves, sheep - dead lambs. Their carcasses, like the fallen cattle, were dragged out of the gate. And people threw themselves on it. They immediately began to eat, tearing it by their hands...

I remember I ran out once to walk – they did not keep track of me... And then I was grabbed by someone's hands. Weak, I felt, but they kept me somehow tenaciously. I began to break out. And how old I was ... well, four years or more. Well, my grandmother came to the rescue, shouted. Several times a day, she punished: do not go beyond the gate - they will eat you". 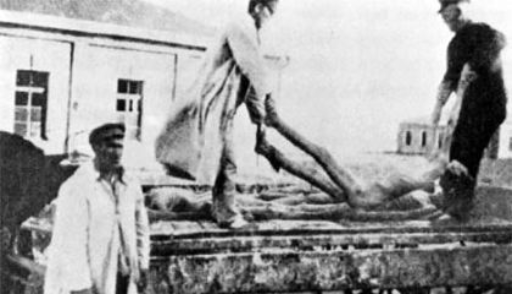 When he and other participants of the trip came across an empty dwelling "a small living creature jumped out of a tiny hole of a hut and rushed at people. He was all covered in blood. Long hair snapped into bloody icicles and protruded to the sides, legs thin, black, like the legs of a crow. His eyes were insane; his face was clotted with blood and smeared with dripping blood. Teeth were bared, red foam from the mouth.

All four recoiled and rushed to escape, not remembering themselves from fear. When they looked back, this creature was gone.

"What was that?" croaked Gabit, looking at the companions. They were silent, trembling with great trembling. Nobody said a word. Only then, in Kostanay, one of the fellow travelers told him:

"Do you think it was a djinn? No, it was not the djinn. I saw it, I clearly saw it. It was a man, a child, a Kazakh girl, about seven or eight".

“No! No! - shouted Musrepov, in which an ineffable, great and at the same time impotent anger flared up. - That was a famine! Those were the eyes of hunger! The curse of hunger itself!”

Author: Altynzer Dauletbayeva
Use of materials for publication, commercial use, or distribution requires written or oral permission from the Board of Editors or the author. Hyperlink to Qazaqstan tarihy portal is necessary. All rights reserved by the Law RK “On author’s rights and related rights”. To request authorization email to or call to 8 (7172) 57 14 08 (in - 1164)
Қазақша Русский English
THE MOST WIDELY READ
Month Year
Top 10 national dishes you should try in Kazakhstan Master class was organized for the workers of the National Museum of the RK at Botay settlement Jewelry art Women that left trace in the history of Kazakhstan Kazakh yurt – a house without corners The great Kazakh scientist-educator, historian, ethnographer Shokan Ualikhanov was born Kazakh wedding traditions: uryn kelu Cultural walk: Museum of Turkic Academy The story of one photo. Nikolay Panin Address of the President of the Republic of Kazakhstan. Expert opinion – B. Ayagan Cultural walk: in the footsteps of the Hero of the Soviet Union Timofey Pozolotin They proved that Kazakh Art was important for them
Philosophy of the Emblem President of Kazakhstan took part in the opening ceremony of celebrations dedicated to the 175th anniversary of Abai Kunanbayuly Abdurakhman Aitiyev and his struggle Nurmukhan Zhanturin. Actor who played himself Ydyrys Mustambayev. Defender of Abai and Magzhan Online documentaries Kassym-Jomart Tokayev sent a telegram to UN Secretary General António Guterres History of pandemic in Central Asia THE GREAT SON OF THE GREAT STEPPE What was the composition of the country’s Supreme Soviet of the XII Congress Armenians and their kinship with the Kazakh people Nurtas Ondasynov. Kunayev’s Chief
Polls
Materials on the topic
Labels of the Golden Horde khans and Russian clergy
From the story of a blood feud
A role of Buddhism in formation of Central Asian mythologies
The referendum on the Constitution is a significant stage of democratization