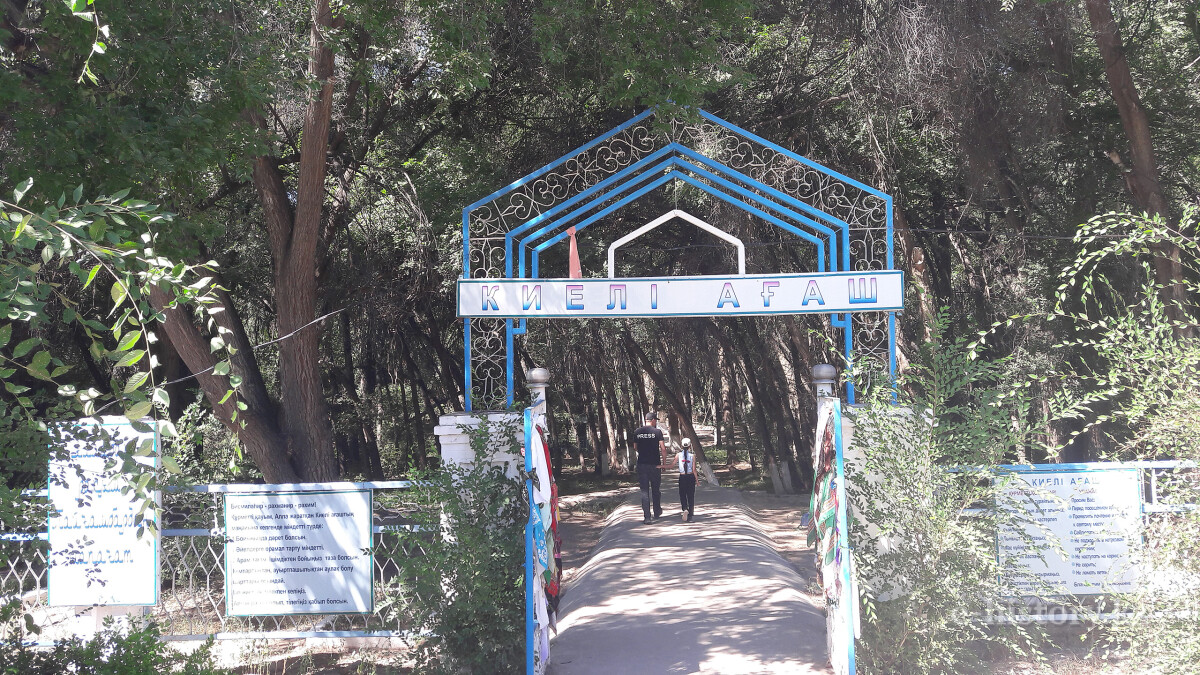 The sacred tree, which is over seven hundred years old, is barely covered by seven people, saved more than 1500 soldiers from the enemies during the Mongol invasion

The Ministry of Culture and Sports of the Republic of Kazakhstan this year implements the shooting of a documentary about the sacred, sacral lands of the Great Steppe. The purpose of the film is to compile a list of sacred places in Kazakhstan, to learn their history and destiny. As noted earlier, by order and organization of the Ministry, the film crew of the documentary "Sacred Kazakhstan" visited the southern regions of the country, tried to plunge into the mysterious history of the sacred sites of three regions (Almaty, Zhambyl and South-Kazakhstan regions). The beginning of this historic journey was made in the sacred place "Kieli Agash" of Aulieagash of Almaty region. Under the canopy of the elm, which has more than 700 years of history, we met with the keeper of the mosque “Kieli Agash” Raya-apay. 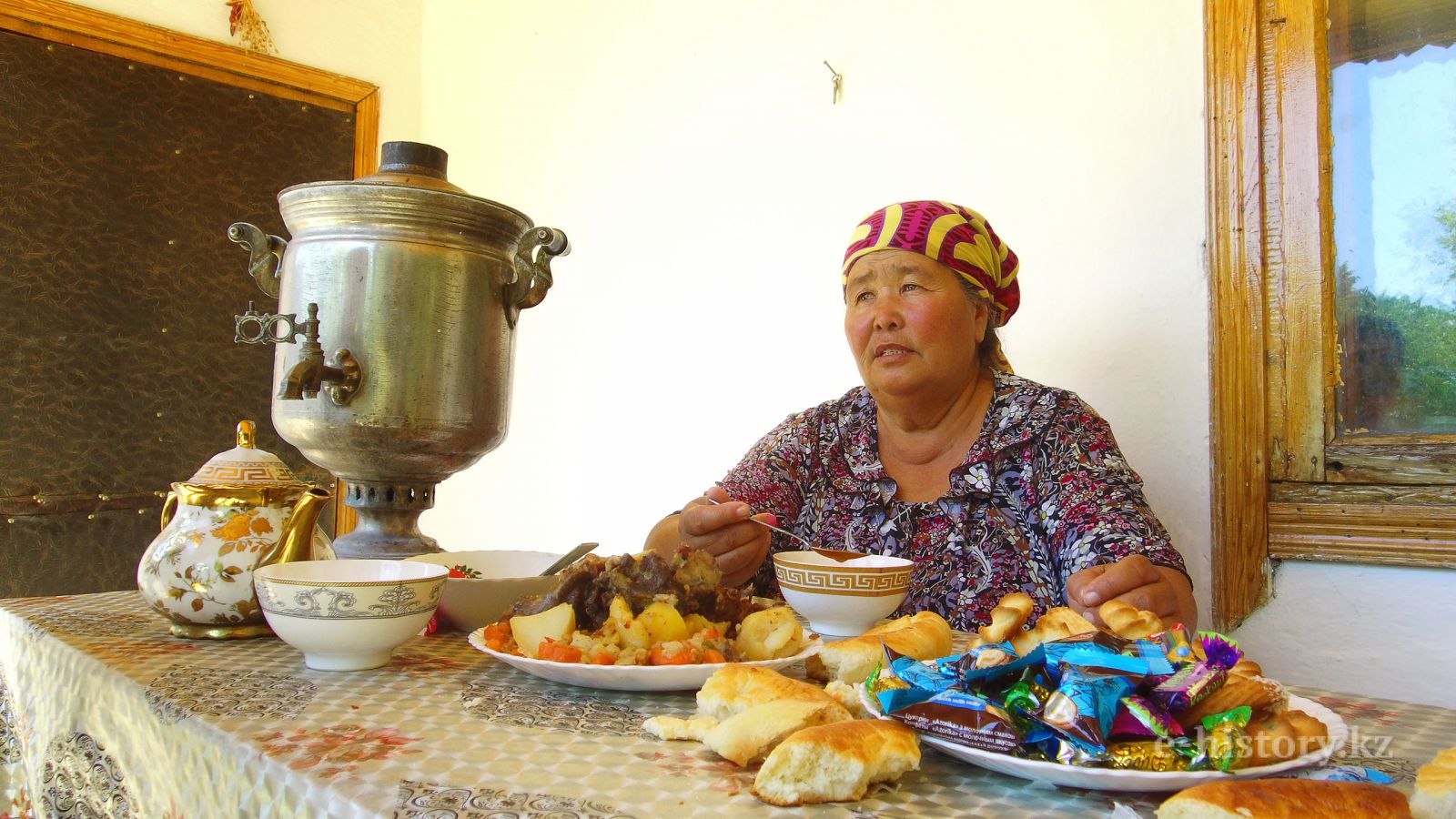 This sacred tree has more than seven hundred years history; there are only three such trees in the world, one in our country, the other in China and Turkey. According to a legend, 7 holy ancestors once stayed at this place, and Saint Shamshyrak who was present among them, had an asatayak (staff). In the morning, on the place where the staff was standing, a tree grew.

This tree is sacred by the fact that for more than 700 years it has been growing and does not fade. Nobody specially raised this tree. Since 1999, the improvement of the place began. When we arrived here was Sofia Haji, her son died, and by the omen she came here. And we got here for a reason, the spirit (aruah) brought us, and for 18 years now we have settled here. My husband Kadyr Mukanuly was a guardian here, after his death, I became the guardian, and for 15 years now I have been fulfilling the amanat (assignment) entrusted to me. The aksakals (elders) of the aul told us: "Do not go left and right (there and here), do not touch the tree," and we also try to meet the people who came here whenever possible. 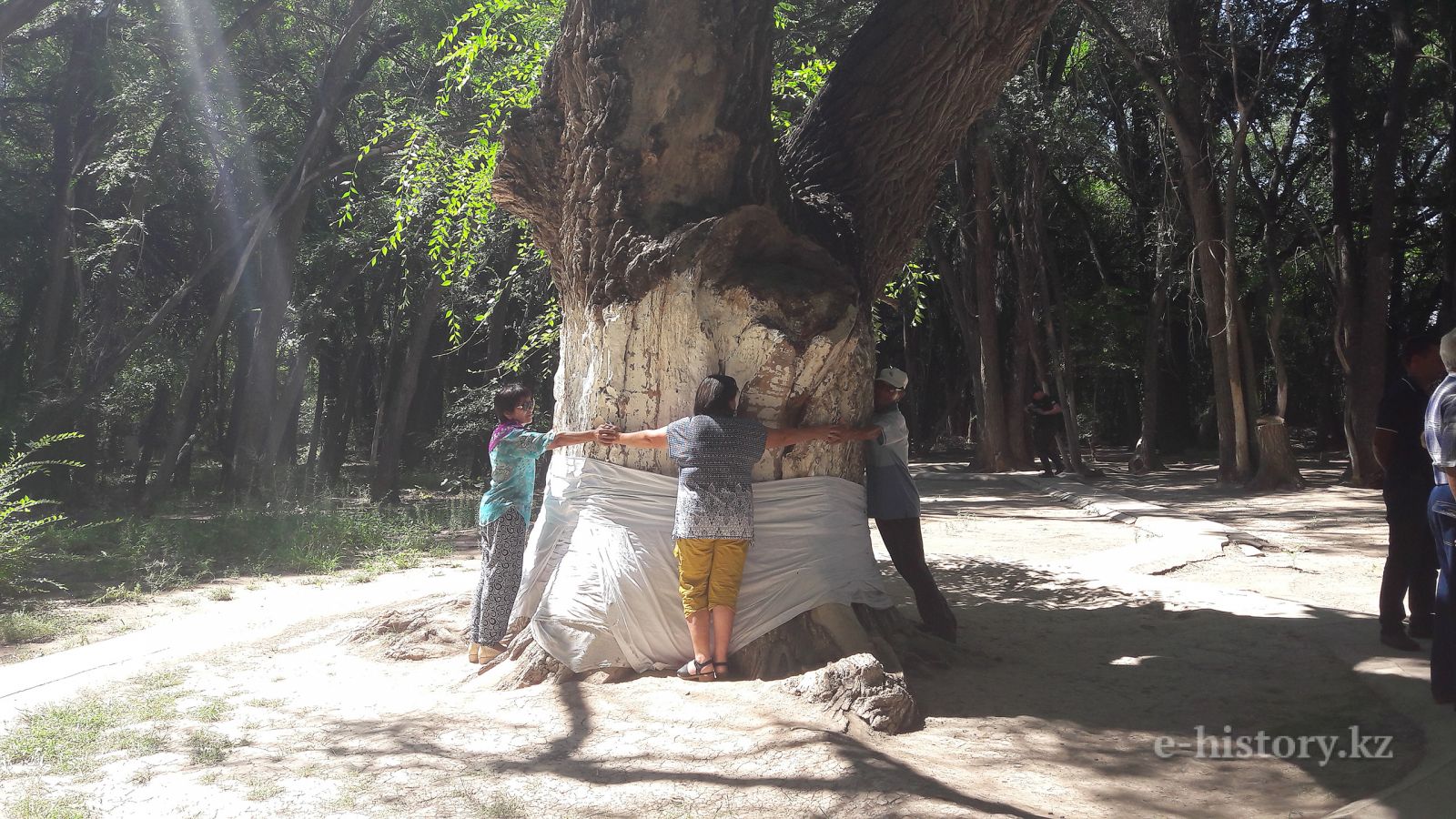 Another miracle - from the root of this tree grew seven more trees, embodying the seven saints. Water that oozes from under the roots of the tree is curative, especially when treating skin diseases. This is scientifically proven. Previously, the stream was deep, the key began to clog in time, now the water is already barely oozing.

According to legend, during the Mongol invasion, from the brutal troops of Genghis Khan, the tree saved more than 1500 soldiers from the enemies.

According to another legend, there lived a batyr named Shormak, and he had no children. For advice, he turns to the elders who advised him to go here. Batyr comes here, prays and asks for a child. At night, he sees a prophetic dream in which he is foretelling the birth of three sons, the first two sons will be born in the near future, and the third should be born a little later. By the omen, the born son he was to call Ertas, but he completely forgets this name, and names the newborn - Akpushyk. Unfortunately, after a little while the child dies. Later, one of the holy elder appears in dreams, and says: "You did not name the son by that name, which we said, if you do not need a child, then we need him, and we took him." 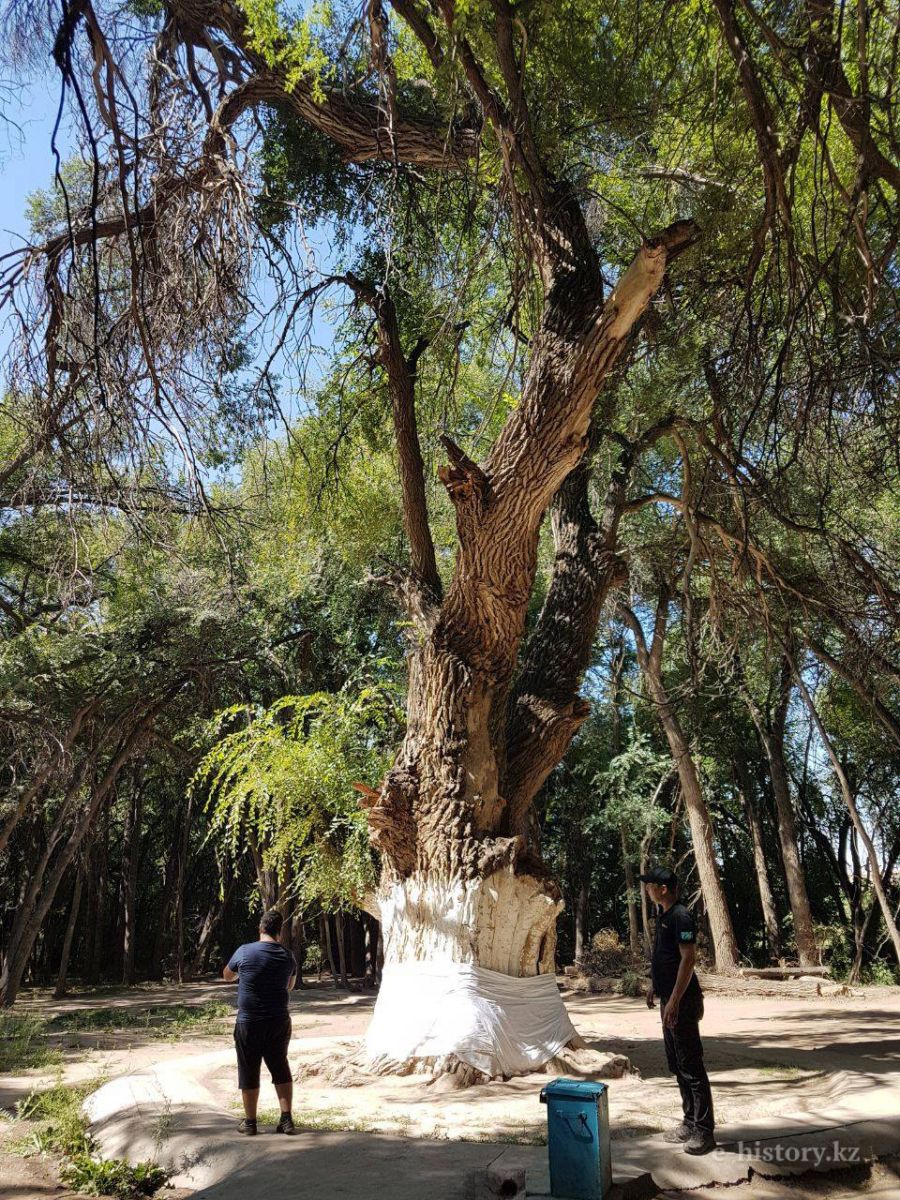 Today, the number of people coming to the holy tree with prayers and desires is growing. Who does not have children, they ask the child, those who are persecuted for failure, are asked to open their way. And people, who have the sacred powers, find themselves here.

I will give an example of the sanctity of a tree. From Almaty came a girl, chained to a wheelchair, she prayed, drank water, spent the night at the sacred tree, and the next morning she got up and left on her own feet, I myself witnessed this.

But there were people with evil intentions. In 2010, followers of the radical current wanted to burn the tree, accused that we are worshiping a tree. Thanks to the holiness of the tree, it did not burn, but it suffered. 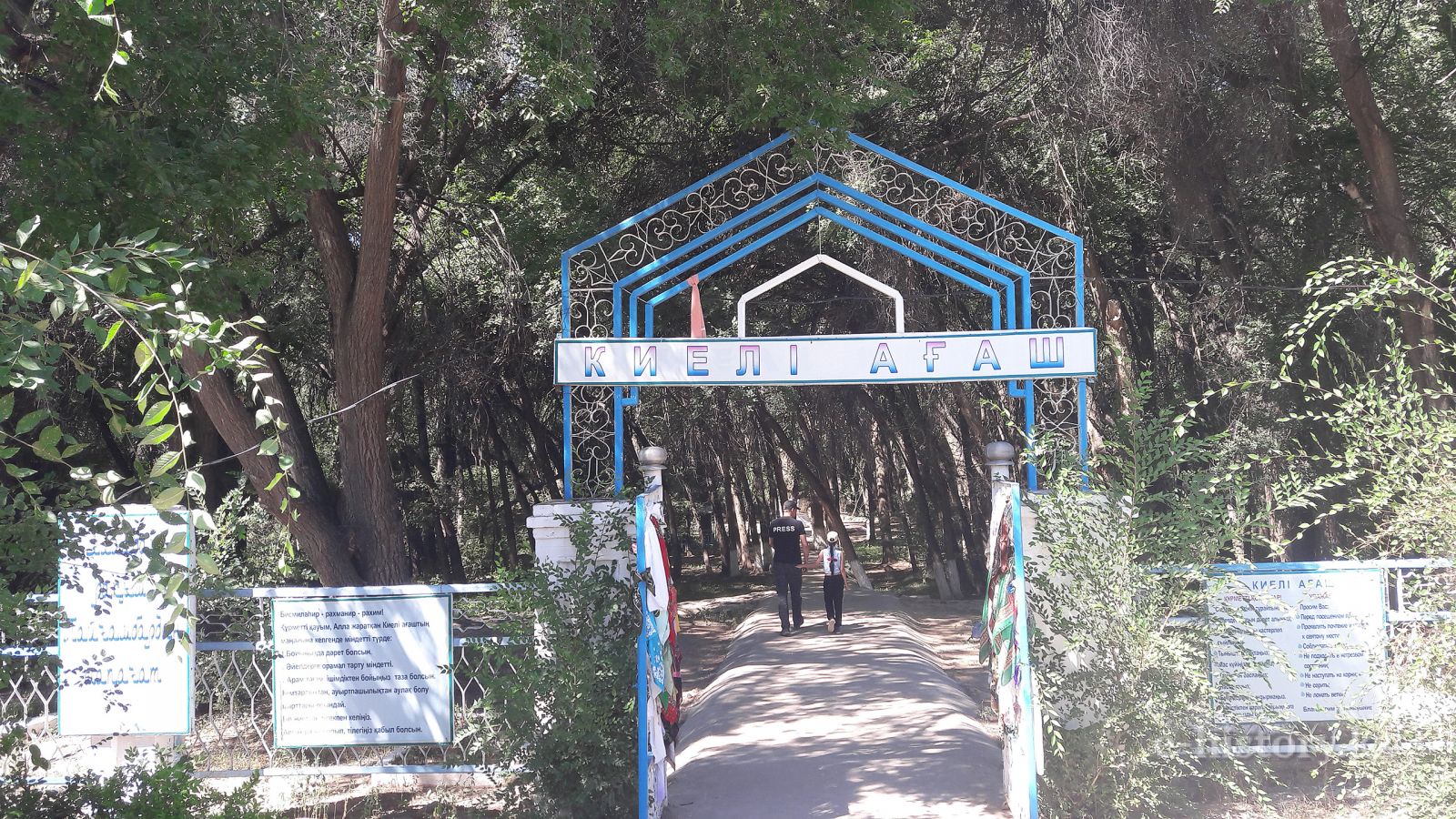 On the issue of state preservation of monuments, on July 27, I went to the region and participated in a meeting on identifying, counting, compiling a list of historical and cultural monuments and sacral places of the region, and protected this place, as a result, "Kieli Agash" is included in the list of monuments protected by the state, now it is necessary to prepare the documents. By the way, the tree of Kieli Agash became the emblem of the youth organization "Zhasyl El".

In 2013, to study the properties of wood, a group of scientists, consisting of 123 people came here from the US. For investigation, the bark of the tree was taken, but the apparatus broke down, and nothing could be investigated. Hence, here the technique is powerless. To ensure the necessary care for the tree, after all it is more than 700 years, this year we specifically invited a biologist from Italy. He treated the tree with vitamins; its wounds seemed to be tightened.

Thus, having seen with our own eyes "Kieli Agash", we were amazed by its miraculous power. We wish that this holy place passed under the protection of the state, and became a historically significant place where crowds of people would flock in search of a miracle.