Home News History in 5 minutes From Kamyskala to Kyzylorda 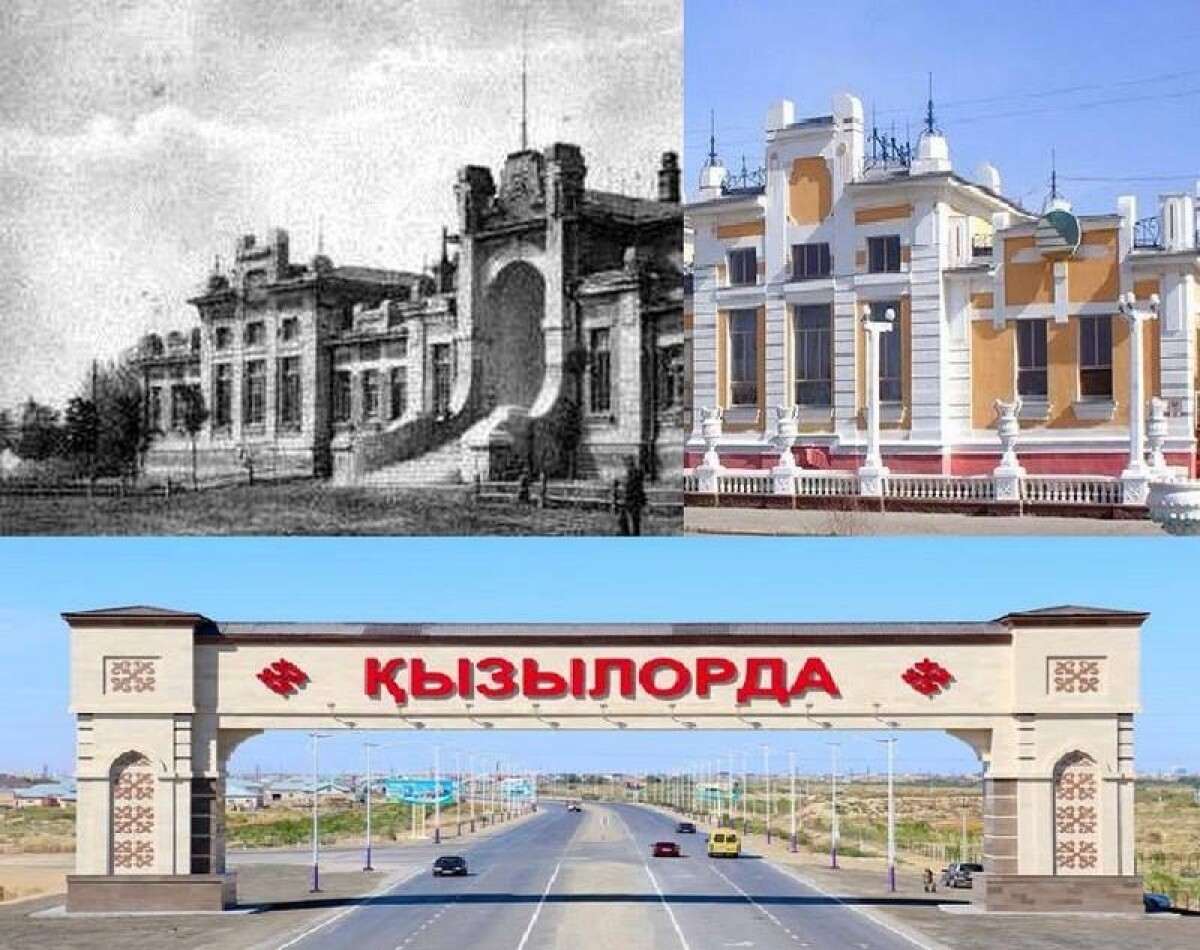 The city of Kyzylorda is the center of the land of Syr; it has a two-hundred-year history. For the first time the foundation of the city was laid in 1818

For two centuries the former city of Akmechet and now Kyzylorda was filled with delightful monuments of the new century, high-rise buildings with a peculiar architecture appeared in the city, production was growing, and the economy was developing. Looking at today's image of the city, do not forget about its past. In the development of the region - the home of rice growing, Kyzylorda played a huge role. At the beginning, the Akmechet fortress appeared in the Kamyskala area. On the site of the fortress is today's Kyzylorda. Let's take a look at the history of the main city of the Syrdarya, let's see what important events took place in the city, why the name of the city changed several times. Historical materials will be spoken in the language of archival photographic documents. 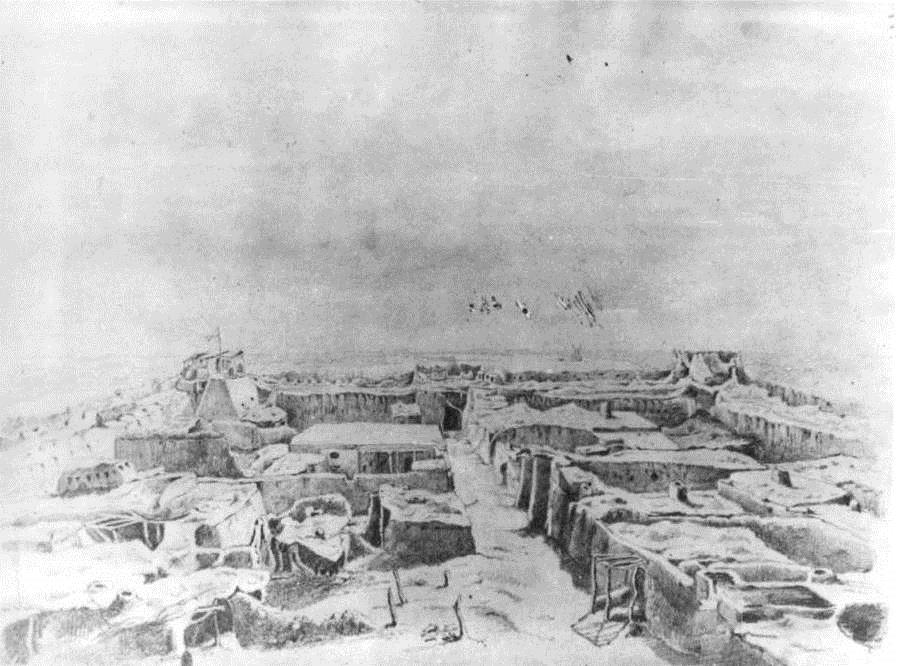 The internal appearance of the left-bank of Akmechet

In the ІІ half of the ХІХ century, the Kazakhs of the Syrdarya were nominally subordinated to the tsarist power. In the upper reaches of the Syrdarya, where the river flowed into the Aral, the Kokand Khanate frequently raided, in the lower reaches - the Khiva Khanate. Kokand people after the conquest of Turkestan in 1814-1817 built the fortresses of Shymkurgan, Kumiskurgan, Zholek, Zhanakurgan, and in 1817 they began to build the fortress of Akmechet - the main center of the system of military fortifications. Kokand people built Akmechet as a defensive fortress. In the center of the city was a mosque built of white brick. And the name of the city is based on this. 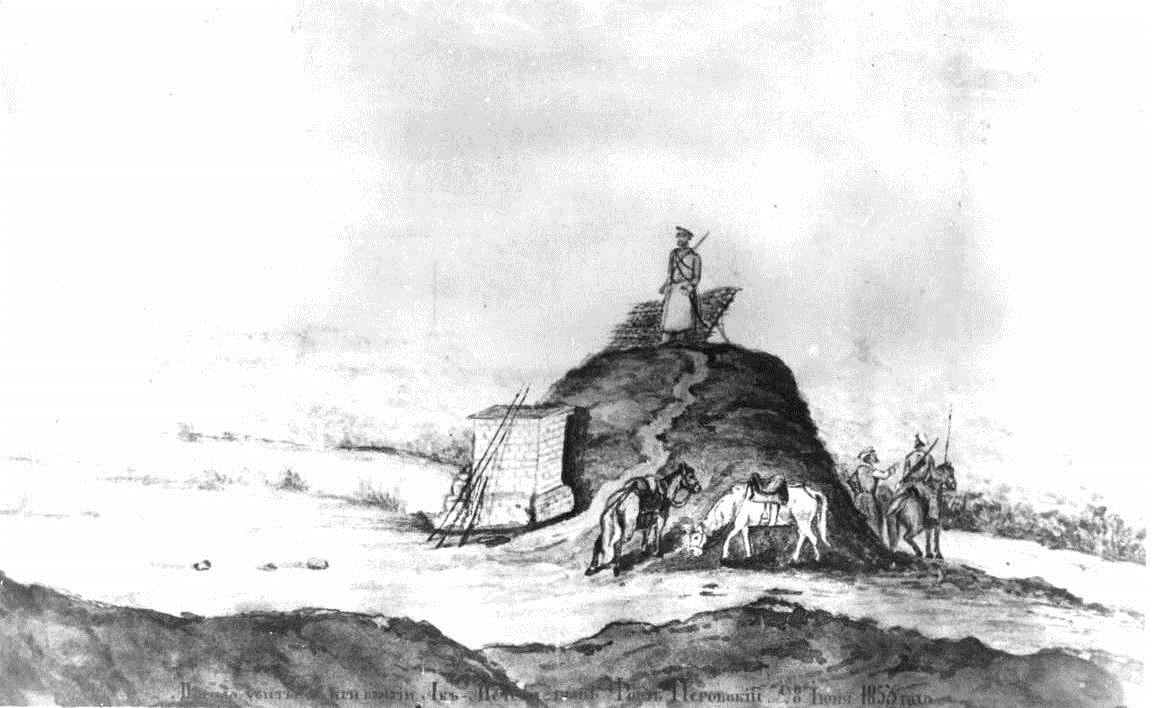 Cemetery of the victims when taking the fortress of Akmechet, July 1853

The colonial policy of tsarist Russia subjugated the Kazakh lands, and approached closely to Central Asia. That is, in order to subordinate the Turkestan steppes, it needed to first conquer the Syrdarya fortresses. 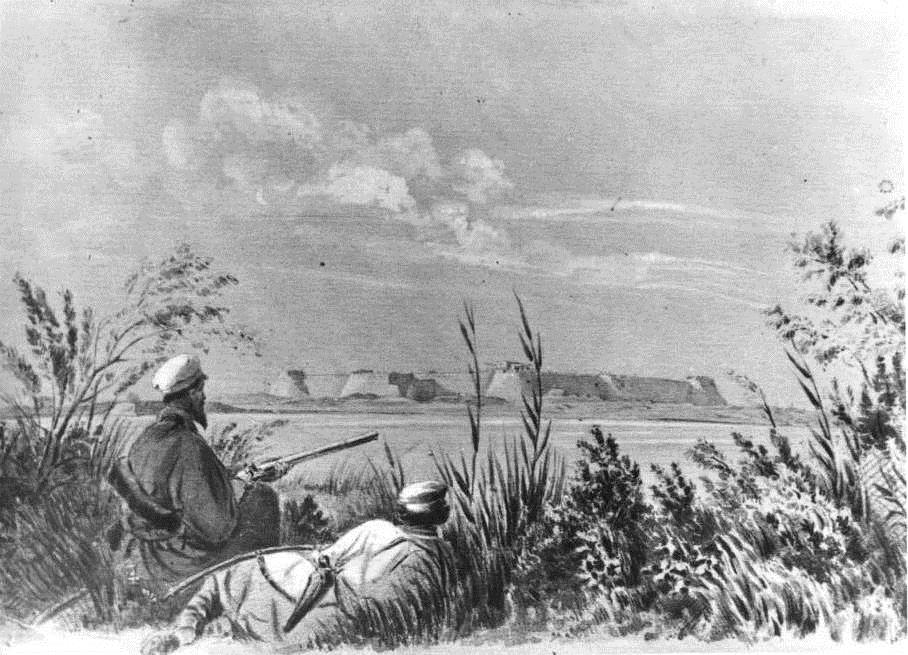 Russian soldiers in the reconnaissance of the fortress of Akmechet

"The location of the Syrdarya Territory at the crossroads of nine roads, the possibility of direct penetration into Turkestan through the Aral Sea and the Syrdarya River, was primarily important from a military strategic point of view," says the well-known historian T. Satpay. 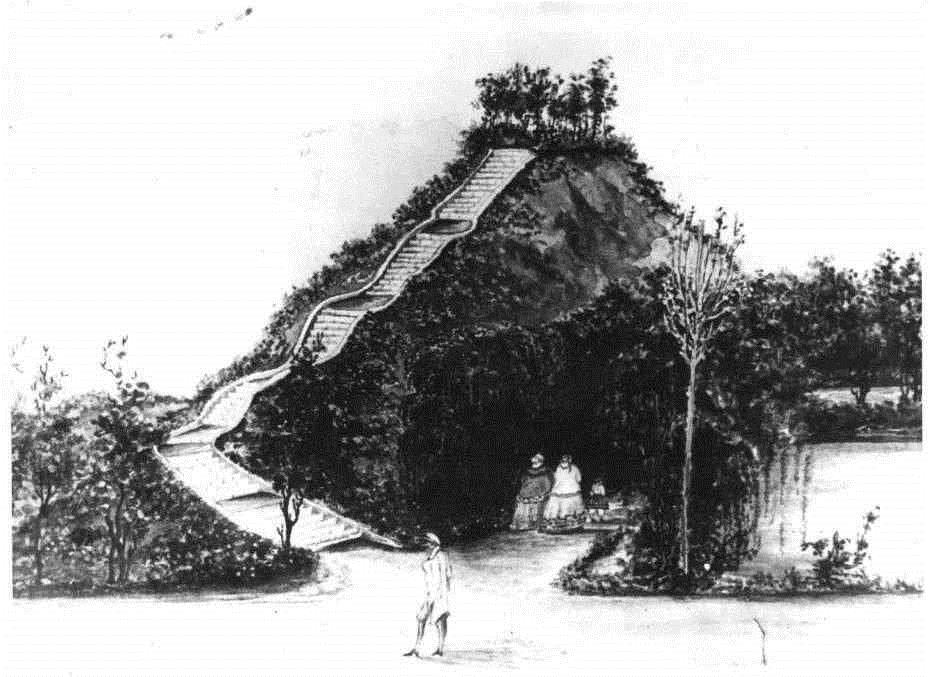 Park in the city of Perovsk

Therefore, on July 28, 1853 Orenburg Governor-General V. Perovsky with Russian troops, under the pretext of protecting the Kazakhs of Syr land from the Kokand, broke into the town of Akmechet. Having expelled the Kokand from the city, the city became known as Perovsk. 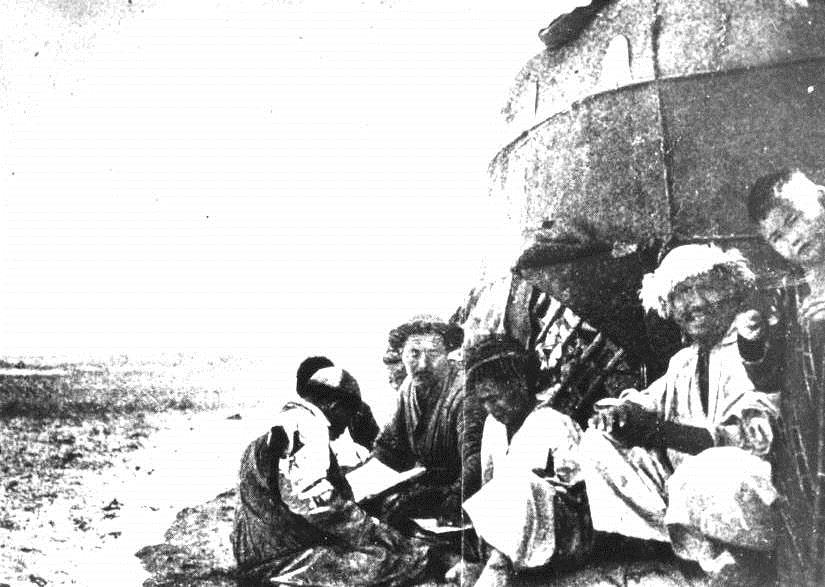 150 years ago, after the complete conquest of the Turkestan Territory, Emperor Alexander II signed a decree on the formation of the Turkestan Governor General. So the Syrdarya region was formed, which included the counties: Aulie-ata, Shymkent, Tashkent, Perovsk, Kazalinsk and Amudarya branch. The regional center was the city of Tashkent. 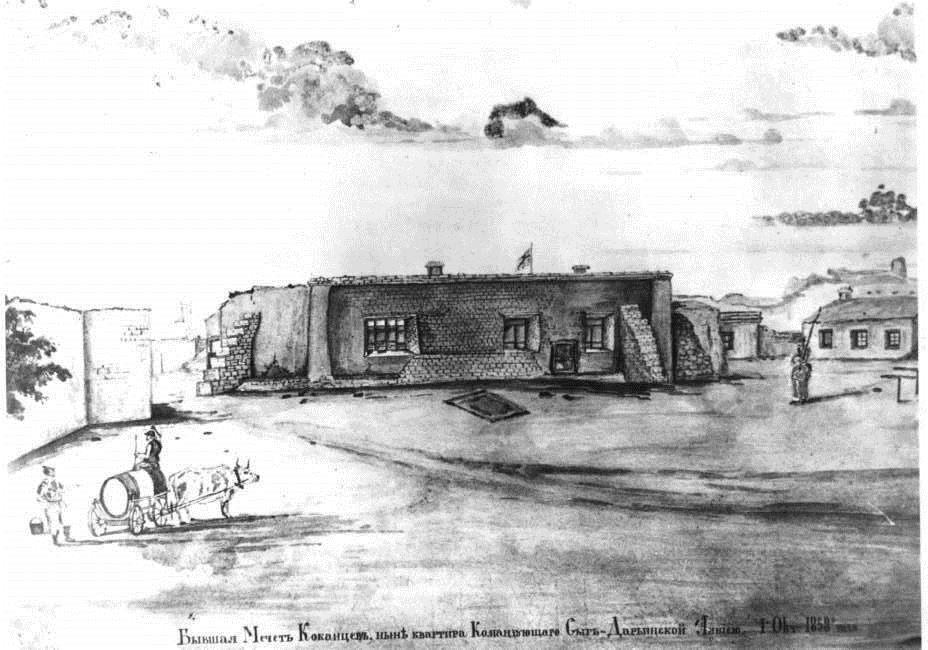 In 1867, the fortress of Perovsk became the center of the Syrdarya Uyezd. Since that time, a brick factory, windmills, workshops began to work in the fortress. There was built a 4-class school. To solve industrial and agrarian problems, the tsarist government in the late nineteenth and early twentieth centuries came up with the initiative to build new railway facilities. One of such initiatives was the Orenburg-Tashkent railway. Rationalism and pragmatism of the idea of ​​building a railway consisted of the need to connect the central regions of Russia with Central Asia through the Kazakh steppes. 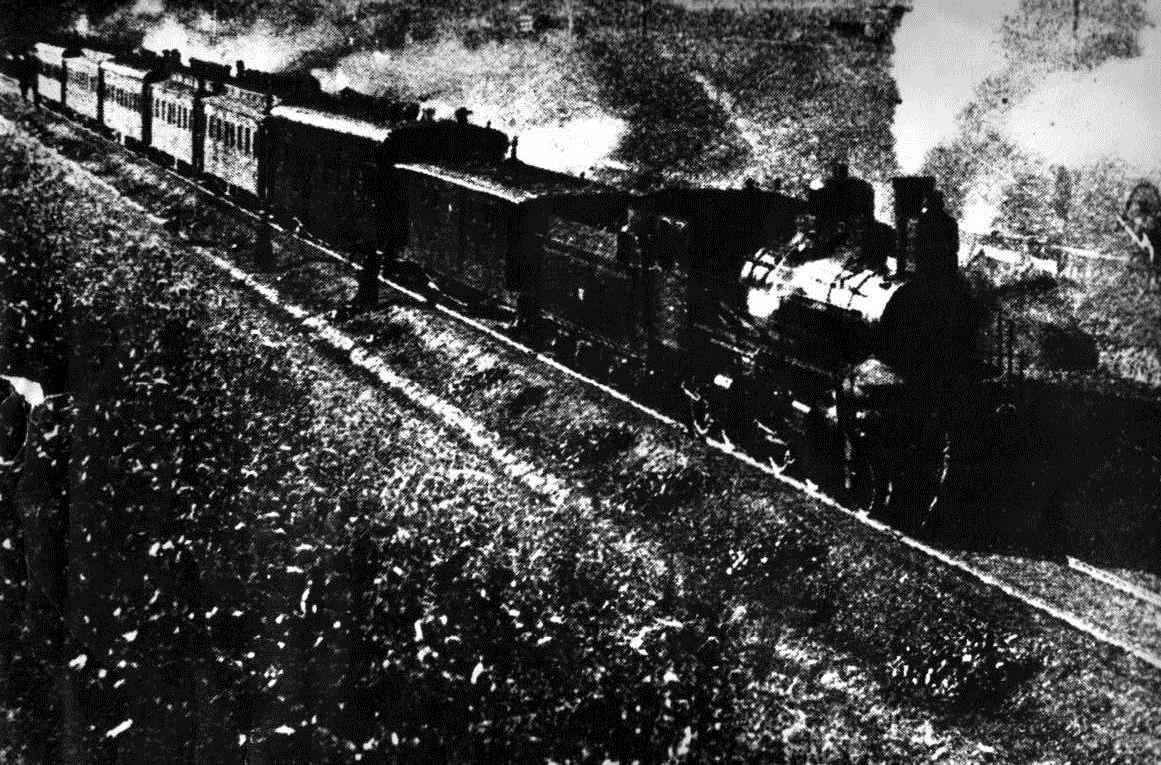 Railway was originally built for military and strategic purposes, but subsequently gained economic benefits. The construction of the railway began in 1901 and was completely finished in 1906. Thanks to the route of the railway in the cities of Perovsk and Kazalinsk, railway stations and depots were built, and many dwelling houses were built. After the commissioning of the Orenburg-Tashkent railway in 1905, the station building was built in the city. 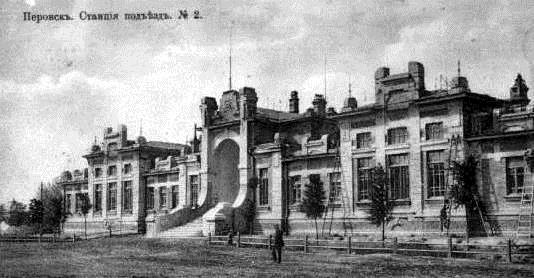 In the troubled times of 1917, the town of Perovsk did not play an important role. In Perovsk, Soviet power was established peacefully. And during the Civil War, the Red Guard detachments of workers and peasants of Perovsk and Kazalinsk became an organized armed force. In those years in Perovsk, partisan detachments were created, among them were the Kazakhs. 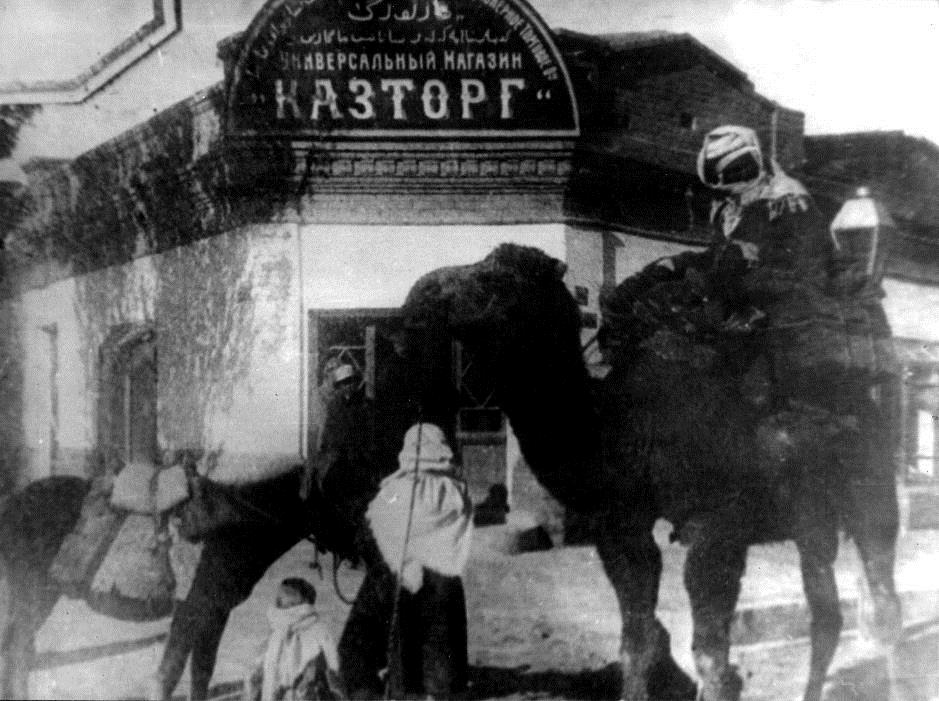 The first department store in Perovsk

In 1922-1925 the city was again renamed into Akmechet. By the decision of the Central Committee of the Kazakh Autonomous Soviet Socialist Republic of February 9, 1925, the capital of the republic was transferred to Akmechet. This has become a great historical turning point. In comparison with Orenburg, the largest number of Kazakhs lived in Akmechet, more than 90%. At present, there is an opinion that the leadership of the republic in the person of Sultanbek Kozhanov and Smagul Sadvakassov in the transfer of the capital of the republic pursued, mainly, national interests. 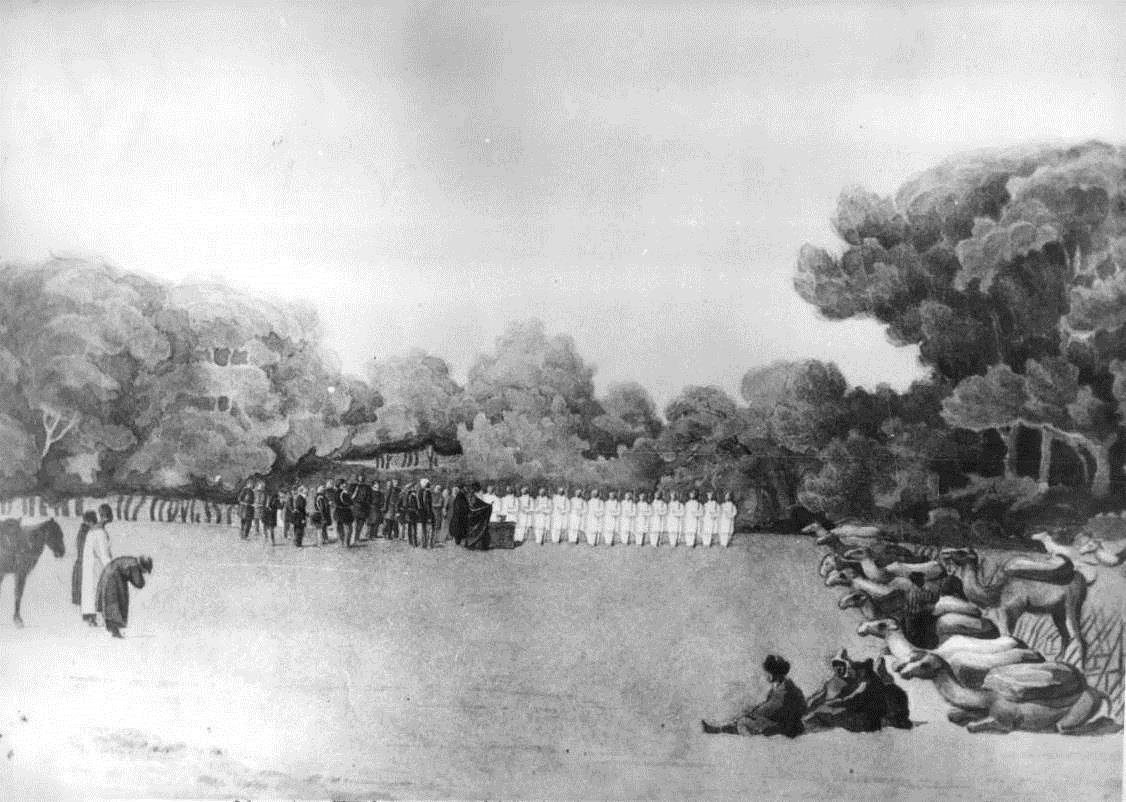 During the Civil War

Sultanbek Kozhanov in the “Akzhol” newspaper in December 17, 1924 issue wrote: "The capital of Kazakhstan should be on the territory of the Kazakh steppe, even if the Kazakhs do not have a city, but in no case in Russia. Kazakh people do not need a beautiful city with tall buildings; they need at least a small, but their capital." 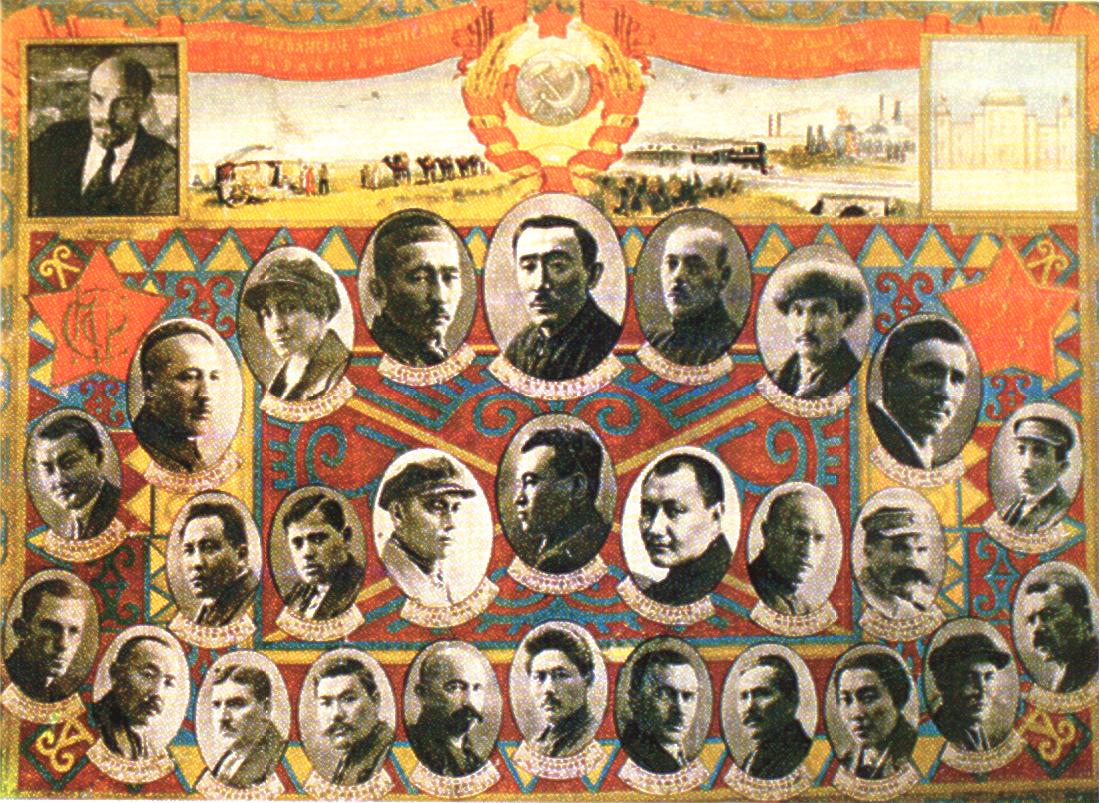 From Orenburg to the new capital the members of the government and delegates of the V Congress arrived at the end of March, 1925. Among the delegates of the Congress were workers of culture and art, such as Amire Kashaubayev, Issa Baizakov, Zhumat Shanin, Hadzhimukan Munaitpasov, Saken Seifullin, members of the government Mukhamedzhan Tynyshbayev, Sultanbek Kozhanov, Abylay Sergazy, and Suleimen Eskarayev. 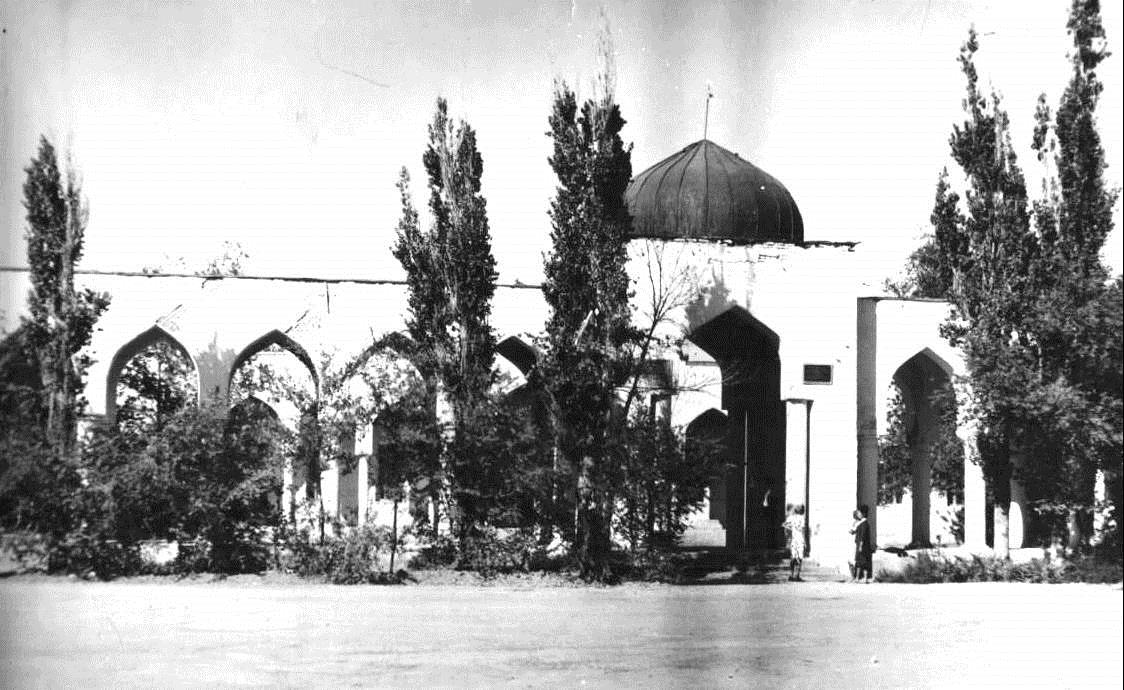 The train with members of the government and delegates of the 5th congress was warmly greeted by the residents of Saksaul, Aral, Kazalinsk, and Zhosaly, a concert program was organized.

April 15, 1925 in the city of Akmechet was inaugurated the fifth congress of the Council of the Kazakh ASSR. At this congress a resolution was adopted to return the historical name - "Kazakhs" instead of "Kirghiz". Also, the congress passed resolutions on the renaming of the "Kyrgyz Republic" into the "Kazakh Republic", and the capital of Akmechet in Kyzylorda. 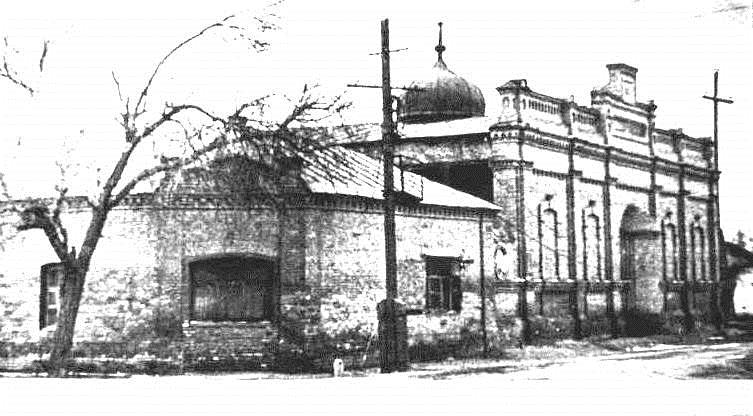 With the transfer of the capital to Kyzylorda a new page of history was opened. In the land, which from ancient times was the center of our ancestors, the government of the country was again formed. The foundation of the new capital was laid. A new construction project has begun in the city. The number of townspeople increased. The city became fully illuminated by electric lighting. After acquiring the status of the capital, construction of various institutions and production facilities began. A confectionary factory, meat processing plants, a beer factory and other enterprises were opened in the city. New educational institutions, public service centers, new research institutes, hospitals have been built. 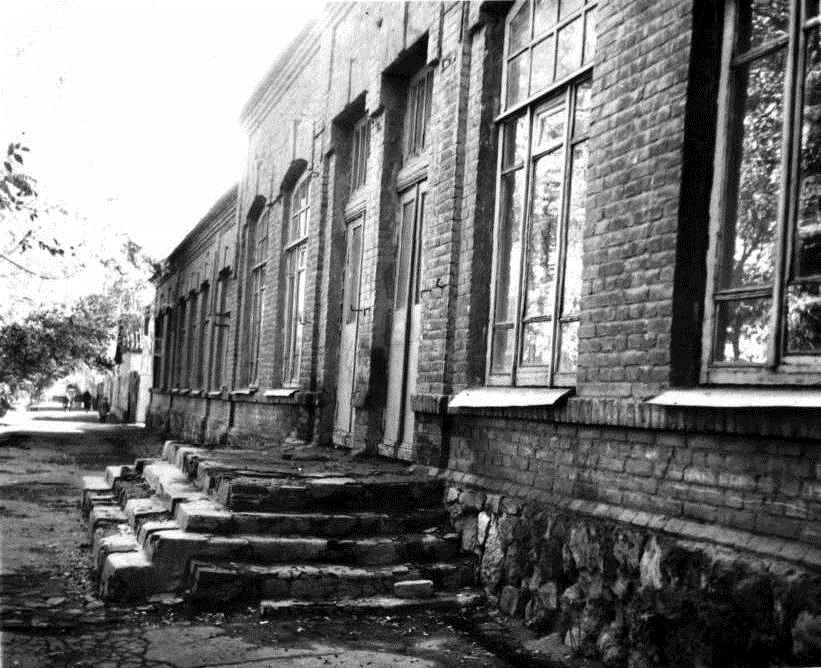 Protecting the interests of the people in the issue of transferring the capital of the republic to Kyzylorda, Sultanbek Kozhanov did a great job, while Mukhametzhan Tynyshpayev and Suleimen Eskarayev were the chief engineers of construction works and developed a master plan for the city. The People's Commissar of Education Smagul Sadvakassov directed the sphere of education and culture. Chairman of the Council of People's Commissars of the Republic Nygmet Nurmakov and Abylay Sergaziyev supported the allocation of finance for the construction of a new capital. Thus, Kyzylorda was written in gold letters in the history of the Kazakhs, as the second capital of Kazakhstan in 1925-1929.

The article was prepared jointly with the Kyzylorda Regional Museum of Local History. All photo documents are taken from the museum's funds.

Author: Altynbek Khumarzakh
Use of materials for publication, commercial use, or distribution requires written or oral permission from the Board of Editors or the author. Hyperlink to Qazaqstan tarihy portal is necessary. All rights reserved by the Law RK “On author’s rights and related rights”. To request authorization email to or call to 8 (7172) 57 14 08 (in - 1164)
Қазақша Русский English
THE MOST WIDELY READ
Month Year
The top of pyramid stores the yurt
On How Kazakhstan Ended up as part of Tsarist Russia Kunaev Dinmukhamed Akhmedovich Recorded history of Kazakhstan. Part 2 The title of “Folk hero” was posthumously awarded to three veterans of the Great Fatherland War Union of the Archives and Library A great son of the Kazakh steppes People who eat horses will kill you Recorded history of Kazakhstan. Part 1 Burial mounds of the southwestern part of the Semirechye region The referendum on the Constitution is a significant stage of democratization Rebooting a field of science and education Kazakhstan's participation in the Winter Olympics has a long history
Polls
Materials on the topic
Labels of the Golden Horde khans and Russian clergy
From the story of a blood feud
A role of Buddhism in formation of Central Asian mythologies
The referendum on the Constitution is a significant stage of democratization