Home News History in 5 minutes THE FORGOTTEN HERO OF WAR

THE FORGOTTEN HERO OF WAR 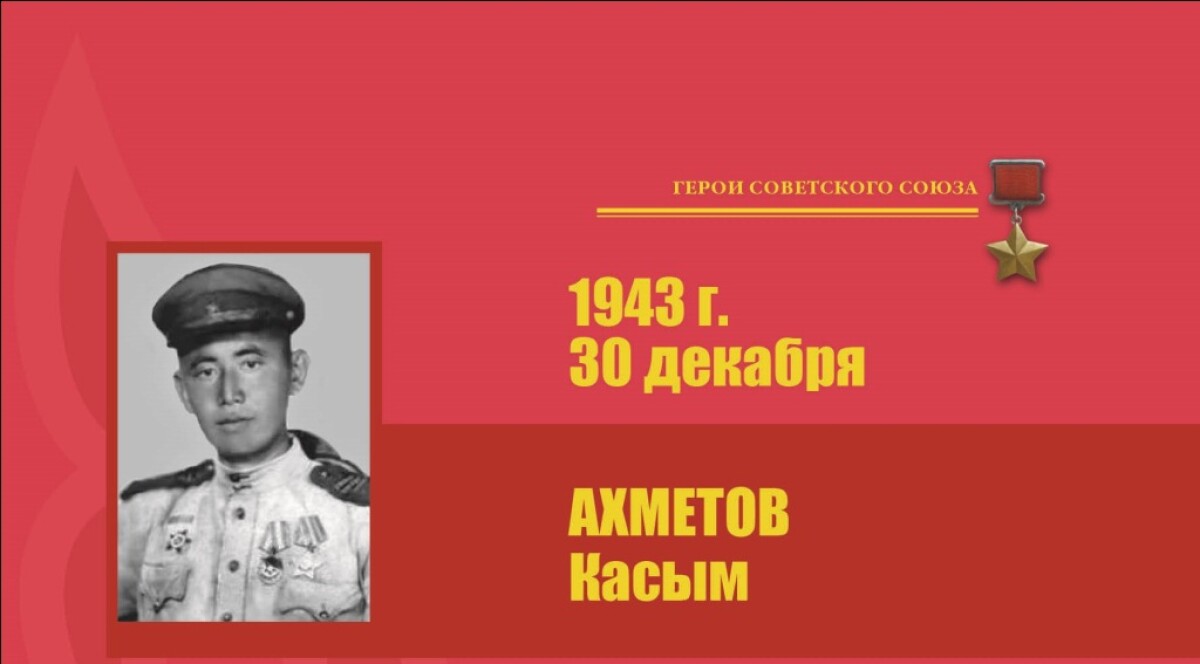 Kassym Akhmetov was only 17 years old when he was taken to the service. Despite his young age, a native of the Kostanay region managed to fight on the Soviet-Finnish, then in the Great Patriotic War

Kassym Akhmetov was born on January 1, 1917 in the village of Tulengut of Mendykara district (in the Soviet period - Orlovka village of the Karakoga village council) in the family of rural worker Akhmet who at one time was a participant in the insurrection led by Amangeldy Imanov. The family had three sons and two daughters. Kassym was the youngest of the sons.

According to the memoirs of his relatives - the aksakal Kazhymurat and Gulsum Amerzhanovna Akhmetovs, since childhood Kassym was clever, courageous, and hardworking. They lived a large family; each of the children had their own duties which were controlled by their grandfather Akhmet and grandmother Shokalai. Such attitude disciplined him from a small age. 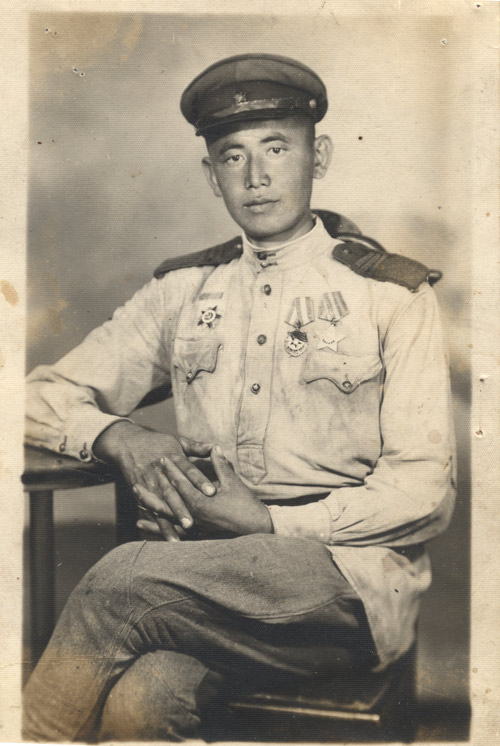 From the age of seven Kassym went to school. After graduation he worked at the collective farm named after Chapayev in Mendykara district. In September 1939, he was drafted into the ranks of the workers' and peasants' Red Army.

His fellow countryman K. Mamanov recalls: "Kassym was above average growth, temperamentally balanced, respectful both with older in age, and with younger ones. He was an example for us to follow in everything. I remember him well. When he went to serve in the Red Army, we saw him off with the whole aul. I was then 13 years old."

Kassym Akhmetov served as a common soldier of the sanitary company in the military part of the Ural military district near the town of Zlatoust. The most prepared soldiers, among who was Kassym, were sent to the Finnish war of 1939 as part of the 85th Rifle Division of the 477th Rifle Regiment. For the shown heroism and courage the common soldier Akhmetov awarded a rank of the younger sergeant, he was appointed the commander of division. The service terminated, but he did not have time to demobilize - the Great Patriotic War began.

In July 1943, fierce fighting unfolded in the Western direction of the Belarusian Front. Separate cities and settlements moved from Soviet troops to the enemy several times. August 22, 1943 Kassym Akhmetov was awarded the Order of the Red Banner. All the details of why did he receive this award, his relatives learned from the very award sheet, in which Akhmetov was presented to the title of Hero of the Soviet Union for another feat.

In a document signed on December 30, 1943, the commander of the 244th Rifle Regiment of the 41st Rifle Division of the 63rd Army of the Belarusian Front Lieutenant-Colonel Kolesov, wrote: "In the battle on July 26, at the station Khatetovo, under the hurricane artillery and machine-gun fire of the enemy, Akhmetov was the first to attack and with an appeal "For the Motherland, for Stalin!" inspired the whole company, first reached the station and was fixed on it. With his heroism Akhmetov contributed to the seizure of the station, the defeat of the German grouping and the development of an offensive operation of the regiment."

Further, the commander of the regiment describes the feat, for which, in his opinion, Akhmetov is worthy of the title of Hero of the Soviet Union: "In battle on 25.12.1943 in the district of the village Small Kozlovichi, the enemy with the support of tanks and self-propelled guns, breaking through the defenses, tried to seize the advantageous border - a cemetery, defended by a group of fighters in 17 people, headed by Comrade Akhmetov. Comrade Akhmetov fought in full surroundings for 3 hours and repulsed 6 enemy infantry attacks supported by tanks and self-propelled guns. In this battle more than 100 Hitlerites were destroyed, but the advantageous border conquered in 3-day fierce battles he did not surrender to the enemy."

How this award list was passed by the authorities, whether it reached the relevant state bodies at all - now no one can say. It is only known that on February 8, 1944, Kassym Akhmetov was awarded the Order of the Patriotic War of the 1st degree. In the resolution of the Presidium of the Supreme Soviet of the USSR it is written: "For the exemplary fulfillment of combat assignments at the front, the struggle against the German fascist invaders and the valor and courage showed at the same time." 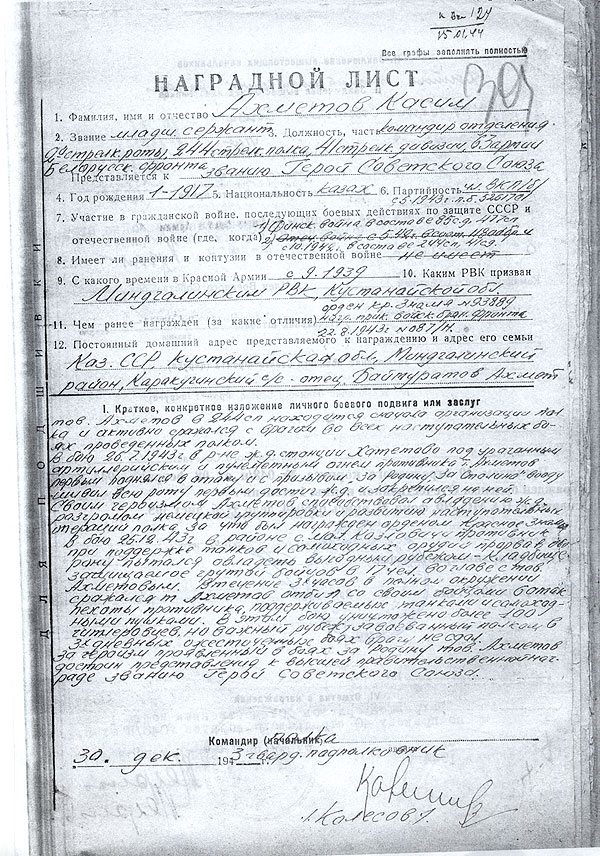 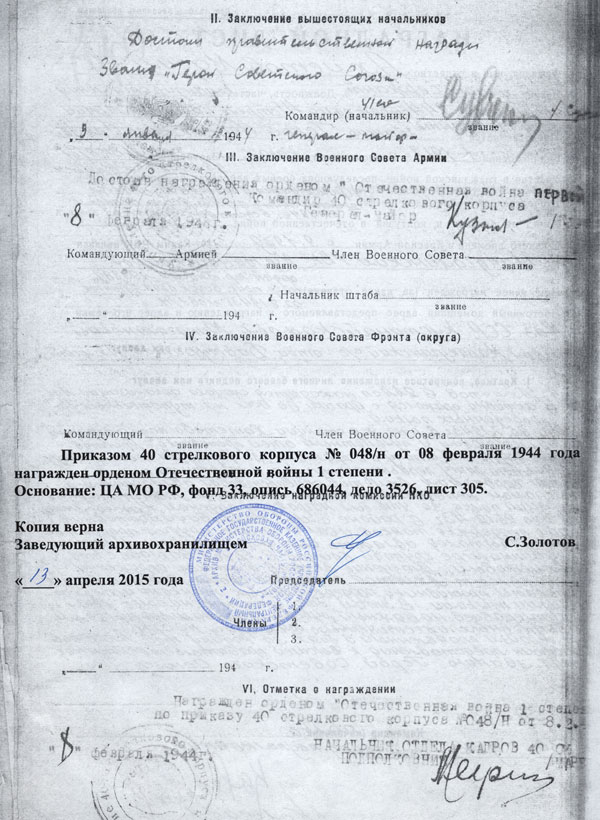 April 16, 1945 Kassym Akhmetov, already a platoon commander, died in battle on the Oder. Before Victory there were only 23 days left. He is buried in the mass grave of Soviet soldiers in the city of Lebus, Germany.

Unfortunately, in the family of Akhmetovs, nothing was saved from documents, front-line letters and awards of Kassym. His mother, having received the tragic news of the death of her son, in a fit of maternal despair, burned everything that reminded her of him.