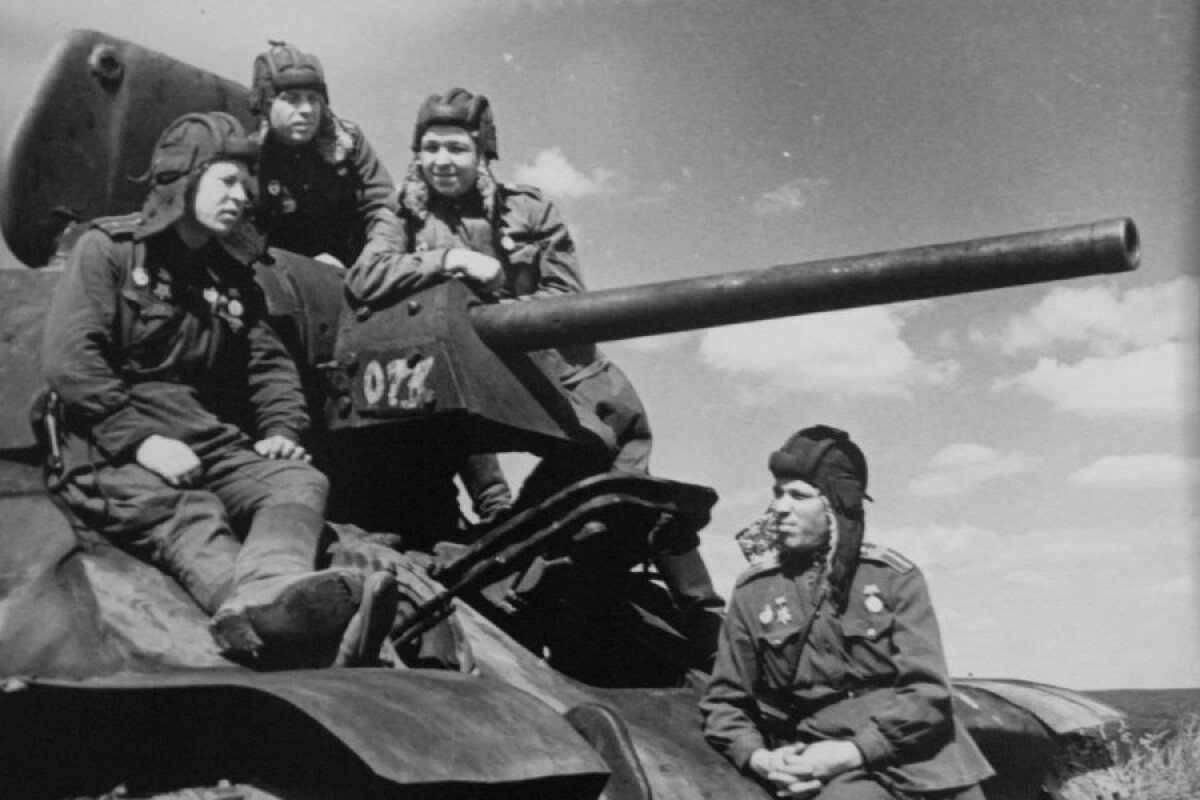 "The messenger of the Kazakh Komsomol Lieutenant Rakhmetov died a heroic death in the battle for the village of Vereist," - Book of memory of the Olenin district of the Tver region (Russia)

When talking about the aces, the pilots usually mean. But the aces were also among the tankmen. This honorary title during the Great Patriotic War was received by someone who managed to destroy five or more enemy combat vehicles in battle. One of these aces, who were terrifying the enemy, was our compatriot Zhumash Rakhmetov.

In 1939 he entered the Syzran Tank School and graduated from it just before the war. In the autumn of 1941, he was sent to the famous 1st Guards Tank Brigade of General Katukov. For a long time Zhumash Rakhmetov did not participate in the fighting, since he served in the repair company. He asked for the front line, but the authorities did not give "good" for a long time.

In July 1942, Zhumash was finally appointed commander of the tank. In the first battle, having gone to the reconnaissance, he revealed the fire system of the fortifications of the enemy. The crew of Rakhmetov destroyed five enemy bunkers, two guns, up to 30 Hitlerites, and even delivered the prisoner to the headquarters.

The veteran of the 1st Guards Tank Brigade N.I. Tepov recalled: "Rakhmetov has always been bold, cheerful, strong-willed and calm. In battle he was fearless, never lost, and shot accurately. I relied on him as myself, but I do not forget such people."

At the end of September 1942, the Soviet command began to prepare the operation "Mars" to break through the defense of the enemy and destroy the West Olenin group. On November 25, the tankers were tasked to occupy the village of Mikheevo and continue the offensive. In the village there were up to 40 bunkers, anti-tank artillery, and self-propelled guns, 11 tanks dug into the ground and up to two battalions of infantry. The village was strewn with minefields. In this battle, the commander of the platoon Rakhmetov, who first broke into Mikheevo, distinguished himself, destroyed 13 bunkers, three guns and more than 50 Nazis, for which he was awarded the Order of the Red Star.

December 1, 1942 Zhumash distinguished himself in the battle for the village of Novaya Boyarschina. Two tanks under his command broke through to the rear of the enemy, destroyed 12 bunkers, killed 80 Nazis, and seized a gun, three mortars and five machine guns. This courageous maneuver allowed the Soviet fighters to seize Novaya Boyarshchina and Khudulikha, which were enemy strongholds. On December 19, Zhumash was given the rank of Guard Senior Lieutenant. 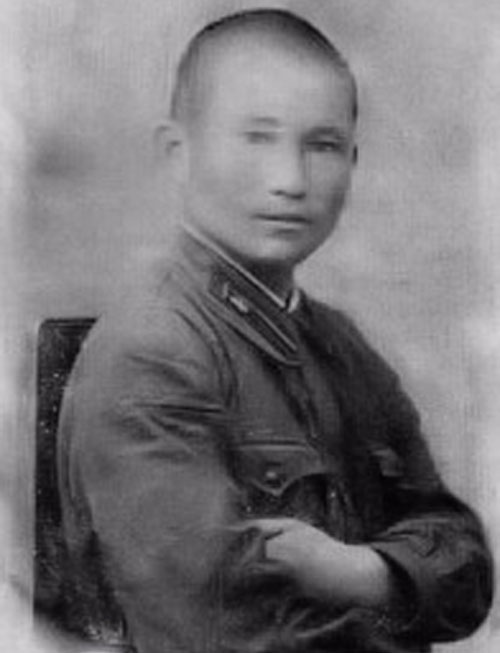 The veteran of the 1st Tank Brigade, Peter Zaskalko, recalled: "The night from December 23 to December 24, 1942, we met in the forest near the village of Zhernosekovo. We sat in the dugout without rolling, or rather, just in the pit, in the middle of which the barrel from the gas oil was desperately smoking. It was creepy frost, starry sky and snow-covered branches of a loose pine. Lieutenant Rakhmetov, a black-eyed, chubby fellow, looked at the night sky for a long time and, finally, thoughtfully said: "The same stars, bright and large, we have over Kazakhstan, only the Bear has moved here a few westwards." At that moment the voice of the messenger came: "The commanders of the machines - to the battalion commander!" The commander of the battalion was tasked with a roundabout maneuver, going to the Germans in the rear, suddenly attacking Korenevka and breaking the encirclement ring. For the fulfillment of the combat mission, four tank crews were identified. The group was ordered to be led by Lieutenant Rakhmetov. A few minutes passed, and, breaking the nocturnal silence, the mighty engines of the frost-bitten thunder sounded. One by one the tanks began to descend into the ravine. Moving along the shore of a small river, they definitely headed for their goal. Soon they approached the place where the village Korenevka was supposed to be. Stopping the car, Rakhmetov got out of it and began to peer forward. It was quiet and nothing was visible. Meanwhile, submachine gunners arrived; they were seated by four men per tank. Everything was ready for the attack.

A red rocket flew up into the sky. The engines of the tanks got fired. After giving two shots on barely noticeable snow hills and not stopping the fire, the cars moved forward. The Fascists did not expect an attack from this side, and although they had two anti-tank batteries, but the guns were aimed at Osinovka and Smolkovo. A sudden blow to Korenevka was unexpected for the higher German command. Deciding that we had completely mastered Korenevka stronghold, it gave the order to open a quick artillery and mortar fire from Boryatino. But their shells and mines lay down where we were not. We continued to move forward."

In Korenevka, five enemy guns were destroyed, a mortar battery, six bunkers, eight firing points. The enemy began to retreat, and the tankmen advanced to the village of Verista. And again in the forefront was the tank of Zhumash Rakhmetov. Verista was taken with a fight.

"However, our success was overshadowed by a heavy loss," continues Peter Zaskalko. - Rakhmetov stopped his tank in the center of the village under a lonely standing oak tree. Leaning to the waist from the hatch, he began to show the other crews in the direction from where the German gun was firing through the village. And at that moment a flash of lightning flashed and Hitler's holocaust hit the armor. Rakhmetov slowly began to sink into the car. On the hands of his comrades-in-arms, the life of our glorious Zhumash was extinguished."

For half a year of fighting the Guards' crew of Zhumash Rakhmetov brewed up 11 enemy tanks and destroyed a lot of equipment. For repeatedly shown in battles with the German invaders exceptional bravery and heroism, the brilliant fulfillment of the tasks of the command, Guard Senior Lieutenant Rakhmetov Zhumash Rakhmetovich was posthumously represented to the title of Hero of the Soviet Union. The soldier was posthumously awarded the Order of the Patriotic War I degree. And Rakhmetov also received the highest soldier's award - he was permanently enlisted in the ranks of the 1st battalion of the 1st Guards Tank Brigade. 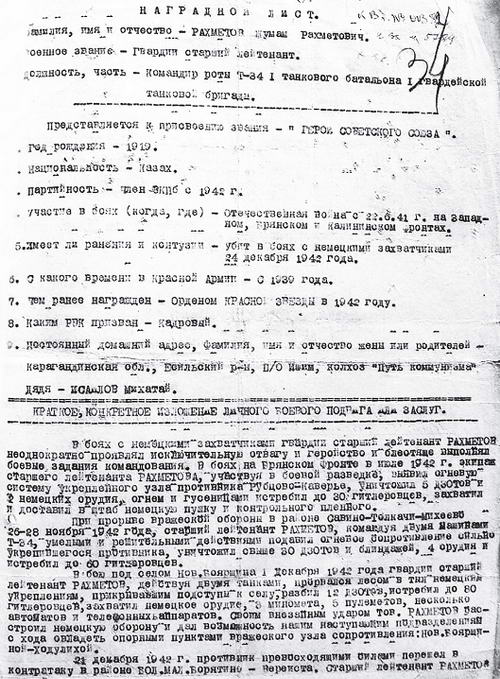