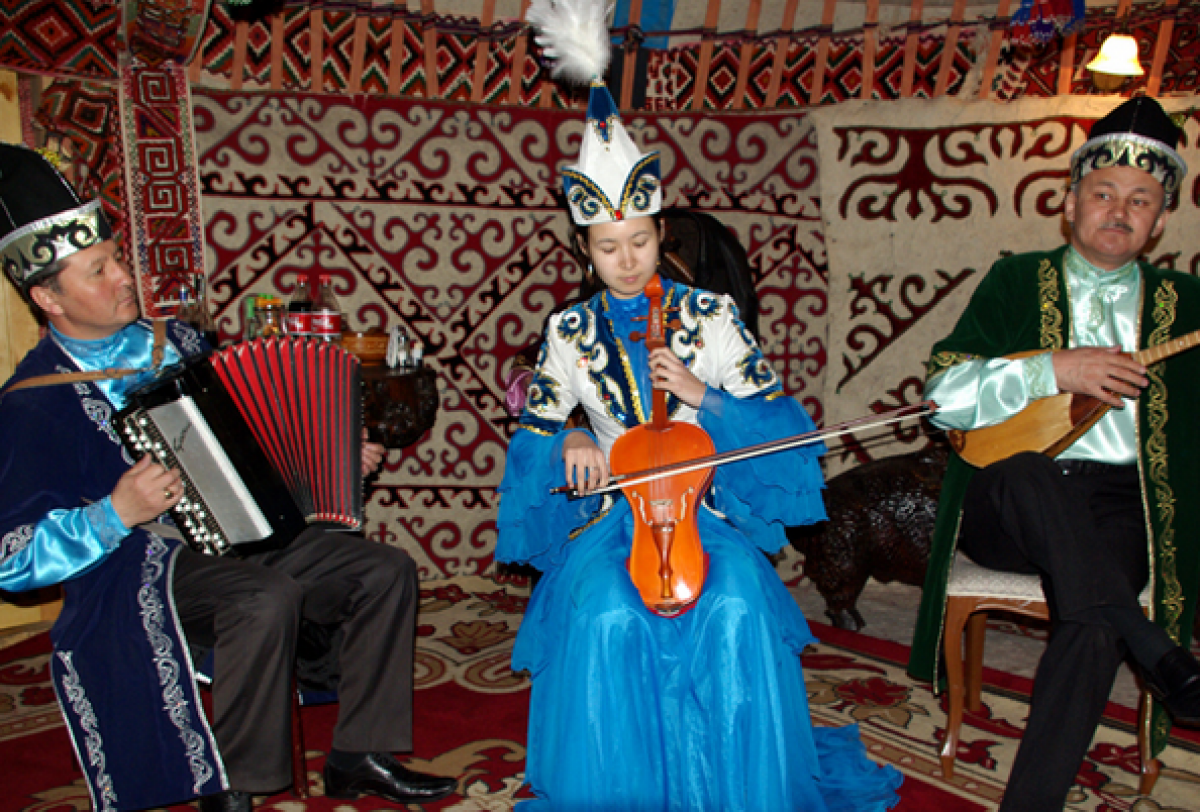 Representatives of the intelligentsia were engaged in educational, literary and translation activities, they created original textbooks.

In the Kazakh literature of the first half of the XIX century a prominent place is occupied by creativity of biys, who created vivid examples of oratory and poetic art. Utterances and tolgau (thinkings) of such biys known in the steppe, as Aktaylak, Bapan, Eset, Zhankisi, were popular among the people. Later, such bright talents as Dulat Babatayuli (1802-1871), Sherniyaz Zharylgasuli (1807-1867), Shozhe Karzhaubayuli (1808-1895), Arystanbai Tobilbayuli (1811-1880), Orynbai Kertagiuli (1813-1891) merged into the literature, the flowering of their creativity falls on the middle and second half of the century.

In the first half of the XIX century the strength of talent in the first place among Kazakh poets is the name of Makhambet Otemisuli (1803-1846), a poet-warrior, a vivid spokesman for the people's aspirations.

Sherniyaz Zharylgasuli (1807-1867) was born on the territory of the present Wilsky district of the Aktobe region. From his early years he was attracted to oratory and folk literature. The poetic talent of Sherniyaz manifested itself early. He participated in the uprising of 1836-1838 in the Inner Horde. And after suppressing the insurrection, he did not break with Makhambet. Sherniyaz Zharylgasuli perfected the art of poetic improvisation. The people widely know his accusatory appeal to Sultan Baimagambet.

Shozhe Karzhaubayuli (1808-1895) was born in the territory of the former Kyzyltu district of Kokshetau region. Blind from birth, Shozhe from a young age wrote poems, played a kobyz and sang songs, traveled a lot. In a number of his works, following a poetic tradition, Shozhe praises some influential people. At the same time, without respect of persons, he tore off the masks from the rulers of power. In poetry competitions - aytys - Shozhe did not know defeats. He was also a great epic poet: he recorded the best artistic variant of the folk epic "Kozy Korpesh - Bayan Sulu".

Suyunbai Aronuli (1822-1895) was born and grew up on the territory of the present Zhambyl district of the Almaty region. From the age of 15 he participated in numerous aytys and soon became the most popular poet in the whole of the Semirechye. He sang the people's defenders, raised social problems, and condemned the unrighteous actions of the rulers. His poetic language is alive and imaginative. Suyunbai brought up followers of his work, who continued the poet's traditions.

Music occupied a large place in the spiritual culture and socio-political life of the Kazakh people. Among dozens of musical instruments of the people, dombyra, kobyz, sybyzgy and syrnay are the most common.

A person, who decided to become a professional musician, mastered the art of performance with a mentor. After that, he regularly and permanently went to the villages, participating in competitions of performers. So the form and vocalists, and instrumentalists supported. Often the author and performer acted in one person. Such are many Kazakh anshi (singers) and kyuishi (instrumentalists). Some talented people perfectly performed musical compositions of various kinds: kyui (instrumental composition of traditional form), song, poetic-musical creation (zhyr, tolgau, terme and other forms). The thematic, genre Kazakh kyui, songs, dances accompanied the Kazakhs all their life.

In the musical culture of this period, political events and the people's liberation struggle left a visible mark. A lot of musical works of the 30-40s of the XIX century are devoted to the struggle against colonialism and oppression. Among them are Makhambet’s kyui.

At the origins of Kazakh Soviet literature of the XX century was the continuer of Abai traditions - S. Seifullin, he managed to give poetry a new breath. S. Seifullin wrote the "Marseillaise of the Kazakh youth" and the first historical and revolutionary novel that reflected the position of the people in the period of revolutions and civil war - "A difficult road, a dangerous transition." M. Dulatov became the author of the first Kazakh novel "Bakytsyz Zhamal". He also translates into the Kazakh language A. Pushkin, M. Lermontov, I. Krylov, and F. Shillsr. Shakarim Kudaiberdiev, Abai's nephew wrote philosophical and historical works, the most famous of them: "Genealogies of Turks, Kirghiz, Kazakhs and Khan Dynasties", "Enlik-Kebek", "Conditions of Islam". Zh. Kopeev was a prominent representative of the clerical and philosophical direction. M. Zhumabayev translated Goethe, Heine, into Kazakh. Alikhan Bukeikhanov, a representative of the pre-revolutionary intelligentsia, also showed himself as an expert interpreter.

The first pedagogical institute, which was later named after Abai, was opened in 1928. In 1929-1931, institutes opened in Alma-Ata: veterinary and zoocultural, agricultural and medical. A major event in the cultural life of the republic was the opening in 1934 in Alma-Ata of the Kazakh State University. The opening of the Kazakh mining and metallurgical institute began the preparation of engineering and technical personnel in the republic in the 1930s. Library staff began to prepare. In 1939 in Alma-Ata was opened the State Library named after Pushkin. During the war years many scientists were evacuated to Kazakhstan.

September 2, 1933, the Resolution of the Council of the RSFSR on the training of personnel for Kazakhstan was adopted. In the 20-30s of the XX century, the Society for the Study of Kazakhstan became a major center for studying the history and ethnography of the region. In 1932, the Kazakh base of the USSR Academy of Sciences arose, which initially had two directions: zoological and botanical. In 1926, M. Masson performs excavations in the place of Aulie-Ata. In 1935, S. Asfendiyarov published the "History of Kazakhstan from ancient times".

In the 1920s and 1930s, folk music was of great interest. Recorded and published "1000 songs and kyuis of the Kirghiz (Kazakh) people" composer and ethnographer A. Zataevich. The well-known musicologist B. Asafyev rightly considered the most valuable monument of the thousand-year culture of the Kazakh people the work of A. Zataevich "1000 songs and kyuis of the Kirghiz (Kazakh) people". Great resonance in the steppe had a competition of folk singers, held in 1922 in Karkaralinsk. Famous singer of the Kazakh steppe Amre Kashaubayev was known in Europe.

In the 30-ies of the XX century Alma-Ata branch of the trust "Vostokkino" marked the beginning of the cinematography of Kazakhstan. In 1934 the film studio of chronicles was opened. In 1938, the first Kazakh sound film "Amangeldy" was staged at Lenfilm.

In January 1934 the Kazakh musical theater of opera and ballet was opened. In the same year, the Kazakh State Orchestra named after Kurmangazy was established, under the leadership of A.K. Zhubanov. In May 1936, the first decade of Kazakh art was held in Moscow, where the operas "Kyz-Zhibek" and "Zhalbir" were presented. The honorary title of the People's Artist of the USSR was awarded to the outstanding singer Kulyash Baiseitova. In 1936, was the opening of the Kazakh State Philharmonic named after Zhambyl.

The theme of Kazakhstan and Central Asia was particularly significant in the work of the Russian realist artist V. Vereshchagin. Behind him was the glory of the famous battle-painter. Fragments of his paintings were episodes of the war for the annexation of Turkestan to Russia. The center of Kazakh professional painting was the workshop of P. Khludov. P. Khludov participated in expeditions to the study of Khan-Tengri, the Vernensky earthquake. In his paintings he portrayed life, traditions of the Kazakh people. One of his talented students was Abylkhan Kasteyev.

The first architect of the old Alma-Ata was A. Zenkov. He actively promoted and introduced wooden architecture into the practice of construction. The most magnificent example of his work was the Holy Ascension Cathedral in Verny, which survived after the strongest earthquake of 1887.

In the 20-30s of the XX century in the sphere of culture, contradictory processes were expressed in the simultaneous creation and destruction of cultural achievements. The enormous damage to culture in those years was inflicted by ideological bias.

On the one hand, the eradication of illiteracy was on the rise, universities were being created, on the other hand, terror did not spare the intelligentsia and the national culture was damaged.